Christians across the world celebrated Christmas today under unusual circumstances due to the coronavirus pandemic.

Streams of drummers marched through Bethlehem yesterday and Notre Dame hosted a choral concert for the first time since it was destroyed by fire.

BETHLEHEM: Palestinian scout bands parade through Manger Square at the Church of the Nativity in Bethlehem on Christmas Eve 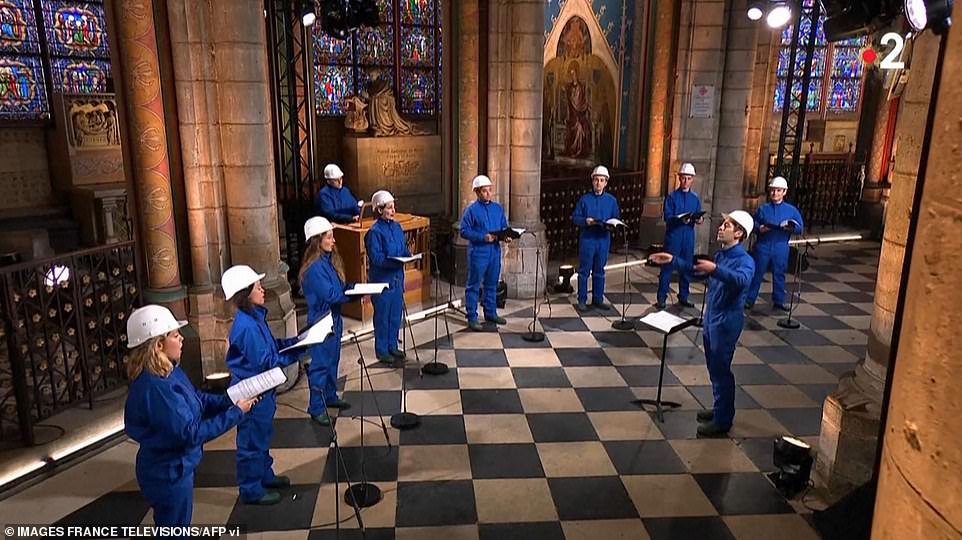 FRANCE: Notre-Dame cathedral in Paris played host to a Christmas Eve choral concert, an annual tradition in France, with singers wearing hard hats while the church is being rebuilt 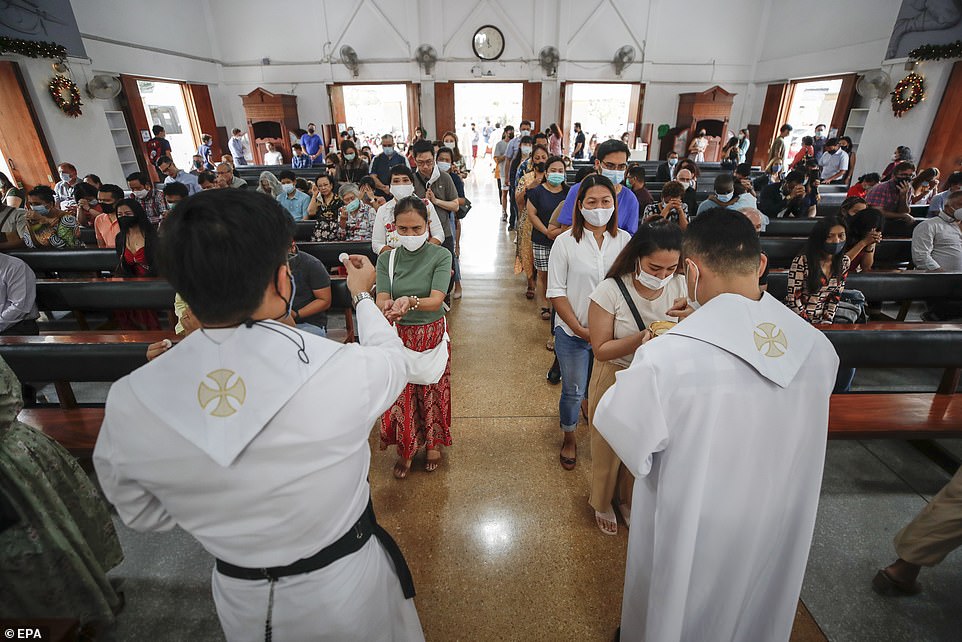 THAILAND: People wearing protective masks queue up to receive the Holy Communion in their hands during a Christmas day mass at a church in Bangkok today 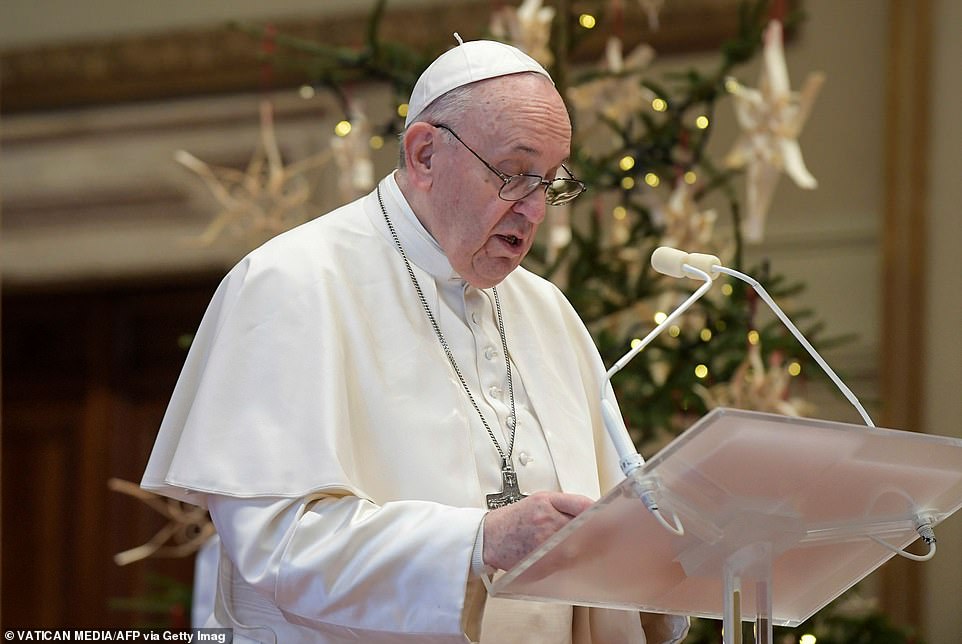 Bethlehem ushered in Christmas Eve with a stream of joyous marching bands and the triumphant arrival of the top Catholic clergyman in the Holy Land.

But few people were there to greet them as the coronavirus pandemic and a strict lockdown dampened celebrations in the traditional birthplace of Jesus.

In a concession to the fact that the cathedral is still being rebuilt, the choristers wore construction hard hats and boiler suits, and there was no audience.

The concert was recorded at the cathedral earlier this month, and was broadcast on French television just before midnight on Christmas Eve.

More subdued scenes were seen across the world as the festive family gatherings and packed prayers that typically mark the holiday were scaled back due to the pandemic. 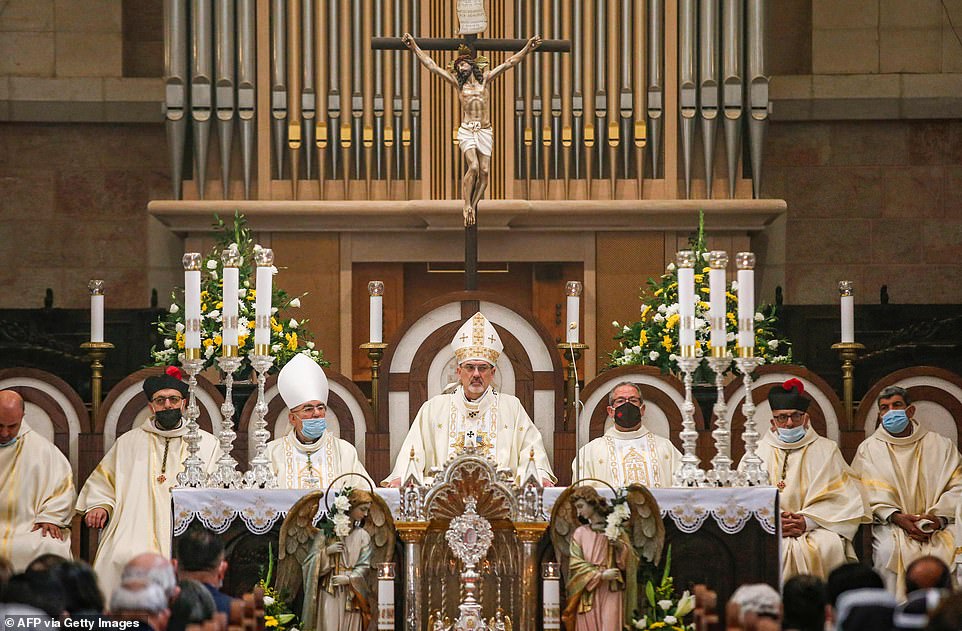 BETHLEHEM: Latin Patriarch of Jerusalem Pierbattista Pizzaballa (centre) leads Christmas morning mass at the Church of the Nativity, the site where Jesus Christ is believed to have been born, in the biblical city of Bethlehem in the occupied West Bank 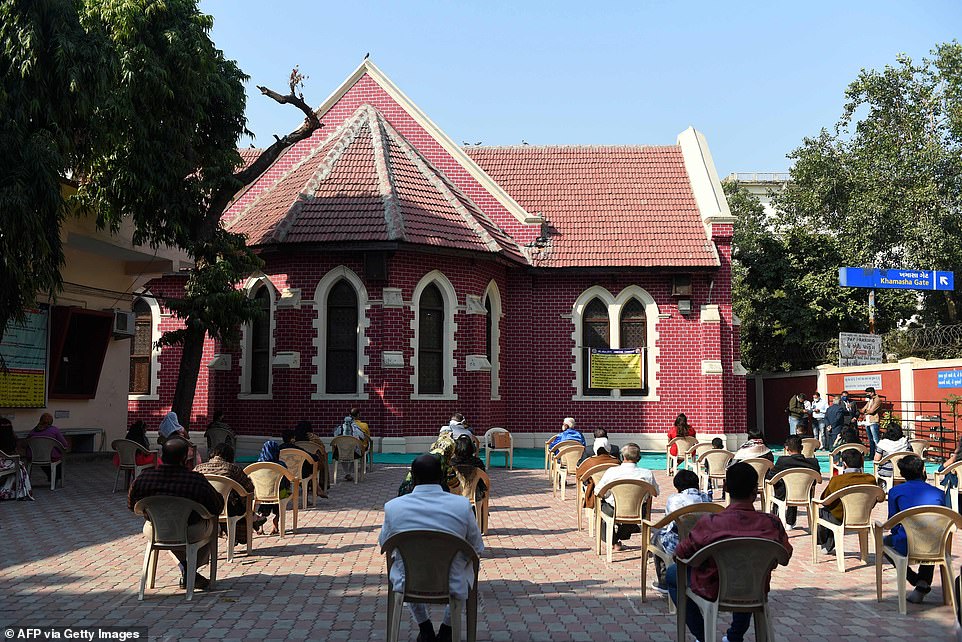 INDIA: Christians wearing facemasks and maintaining social distancing as a preventive measure against coronavirus sit outside a church as they attend the Christmas mass in Ahmedabad 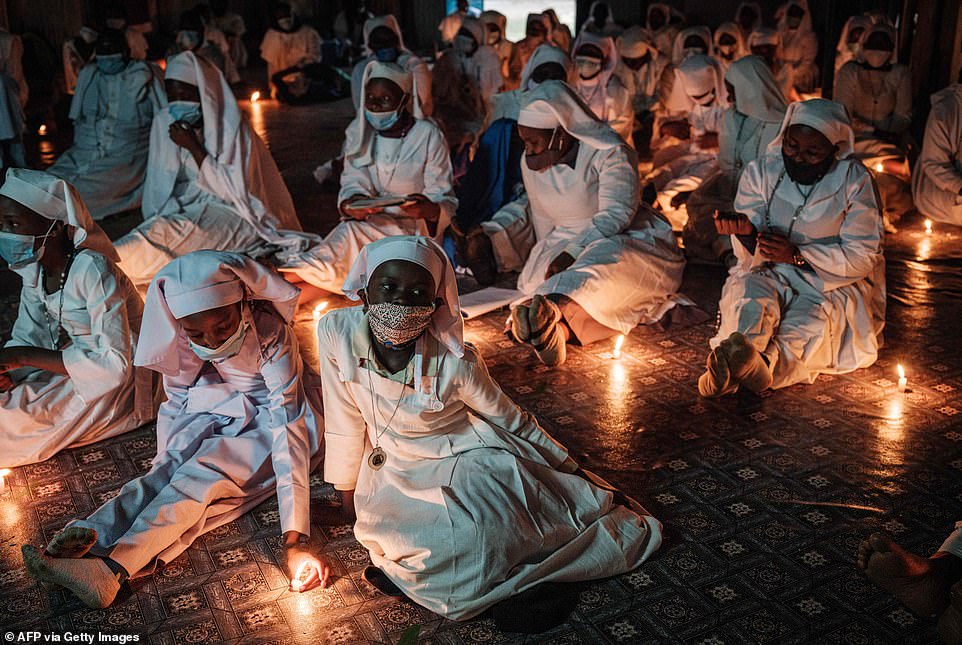 KENYA: Worshippers of Legio Maria attend the Christmas prayer at their church in the Kibera slum of Nairobi today 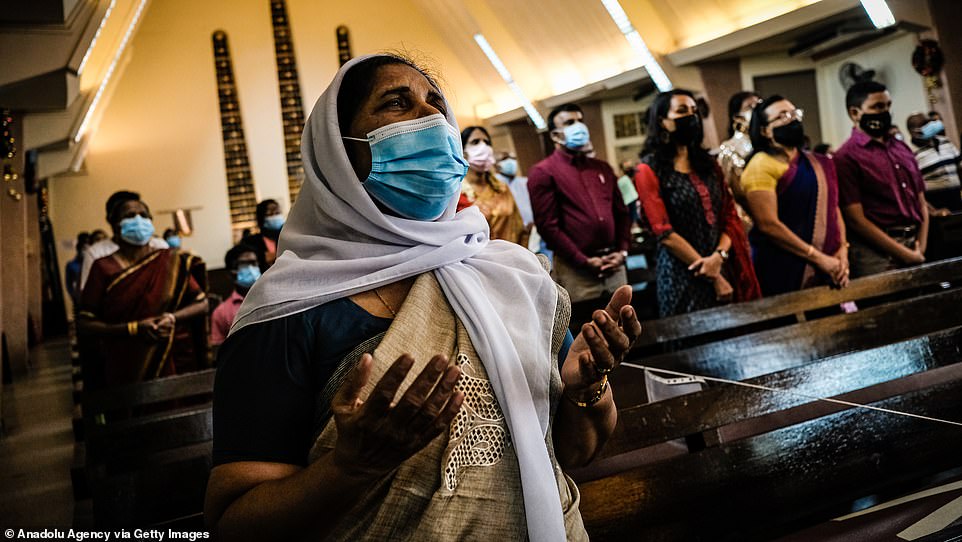 The Italian government’s 10pm curfew prompted pastors to move up services, with ‘Midnight’ Mass starting Thursday evening in some churches as early as a couple hours after dark.

Pope Francis, who has said people ‘must obey’ civil authorities’ measures to fight the spread of Covid-19, fell in line. 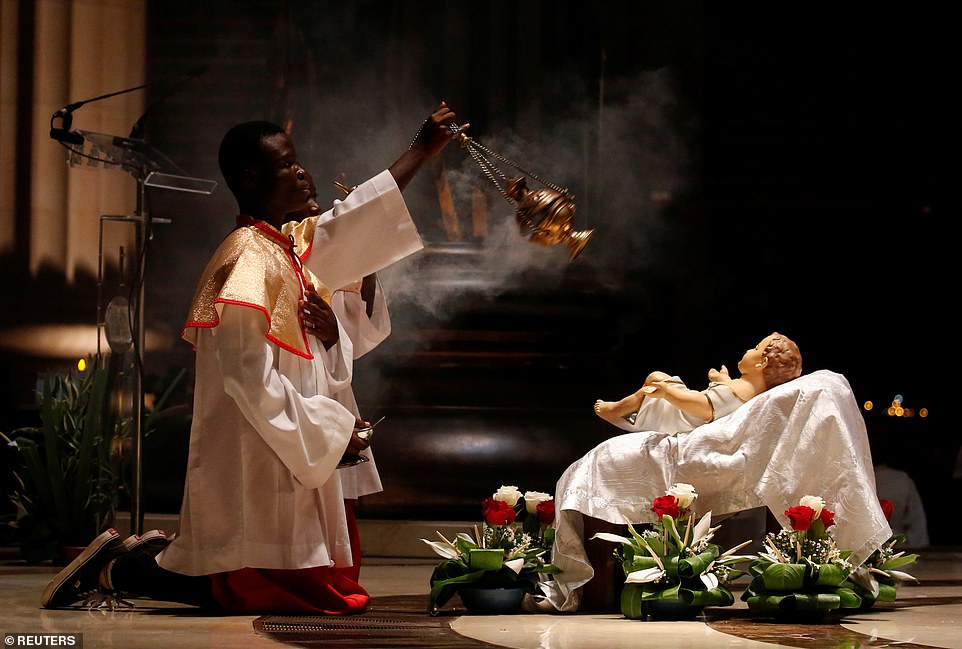 IVORY COAST: Altar boys attend the celebration of Christmas at the Basilica Notre Dame in Yamoussoukro on Christmas Eve 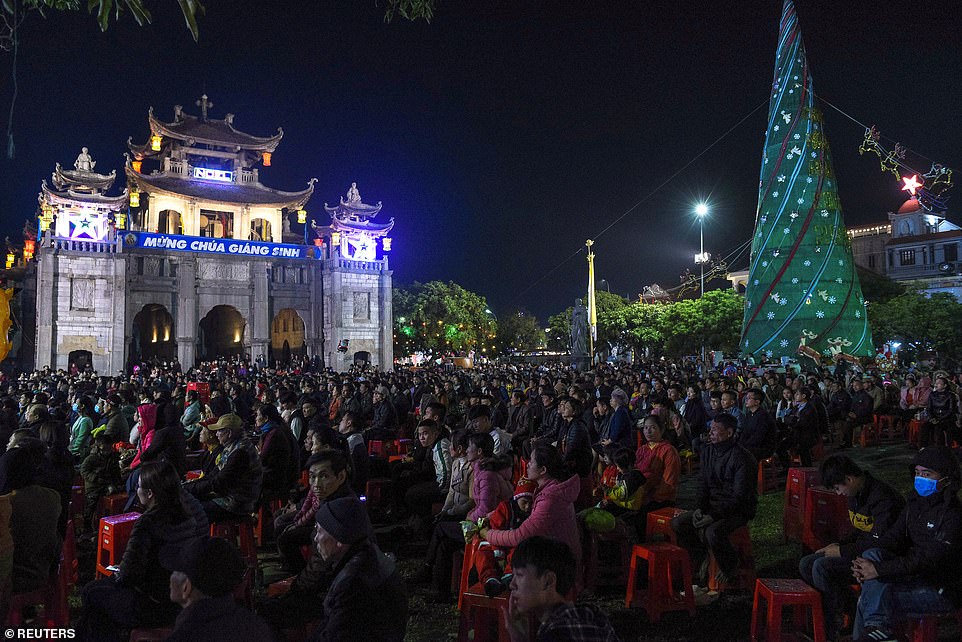 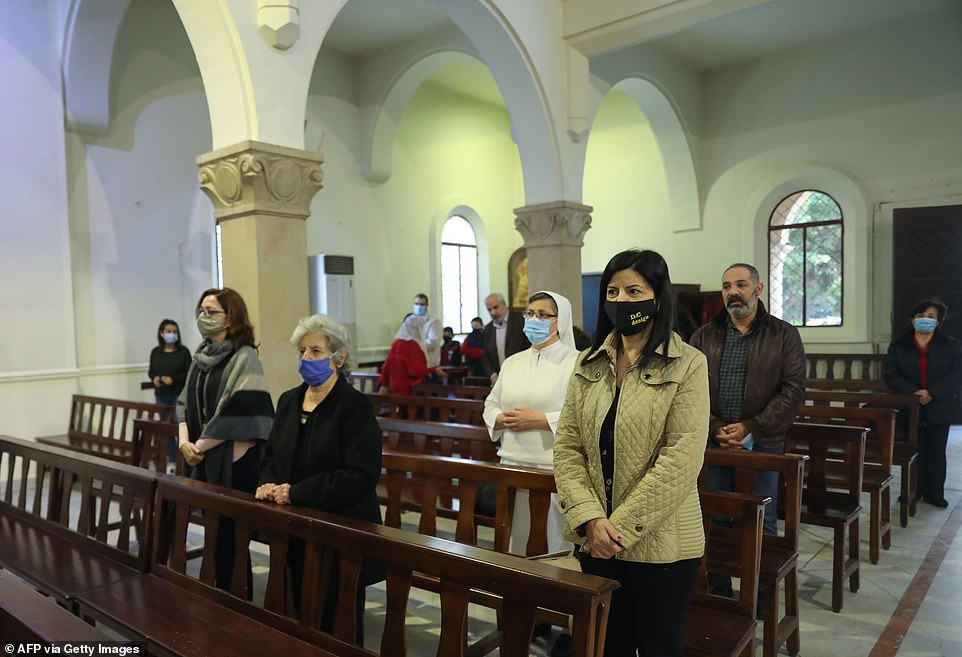 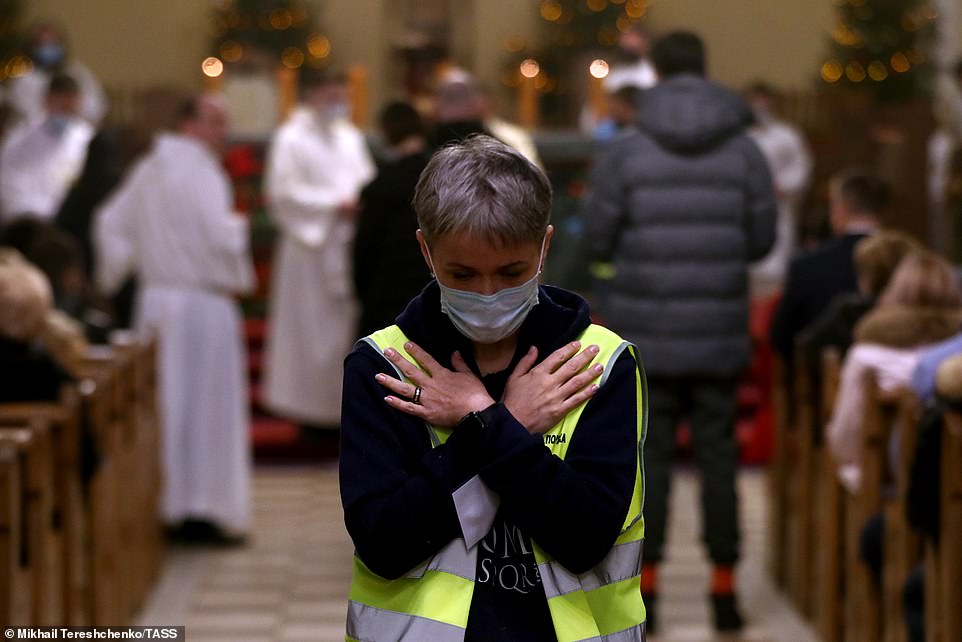 RUSSIA: Roman Catholics attend a Christmas Mass at the Cathedral of the Immaculate Conception of the Holy Virgin Mary in Moscow on Christmas Eve

This year, the Christmas vigil Mass in St Peter’s Basilica was moved up from 9.30pm to 7.30pm.

Normally, seats at the vigil Mass are quickly snapped up, by Romans and by tourists, but the pandemic has reduced tourists in Italy to a trickle.

In keeping with social distancing measures, barely 200 faithful – instead of several thousand – spaced out in the basilica’s pews and wearing masks, attended Francis’s celebration of the Mass.

A row of fiery red poinsettia plants warmly contrasted with the sumptuous cold marble of the basilica.

Francis in his homily offered reflections on Christmas’ significance. 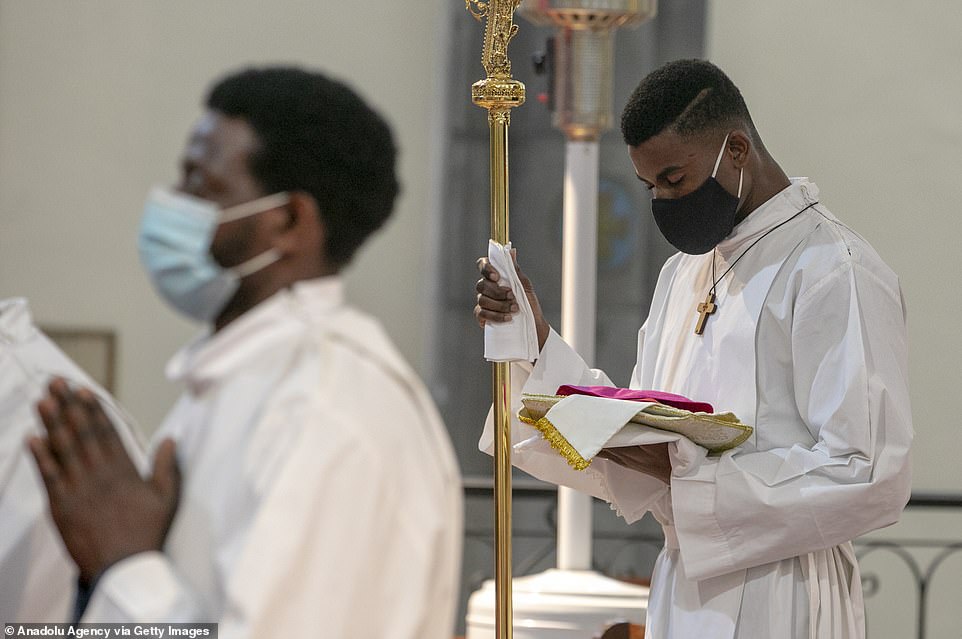 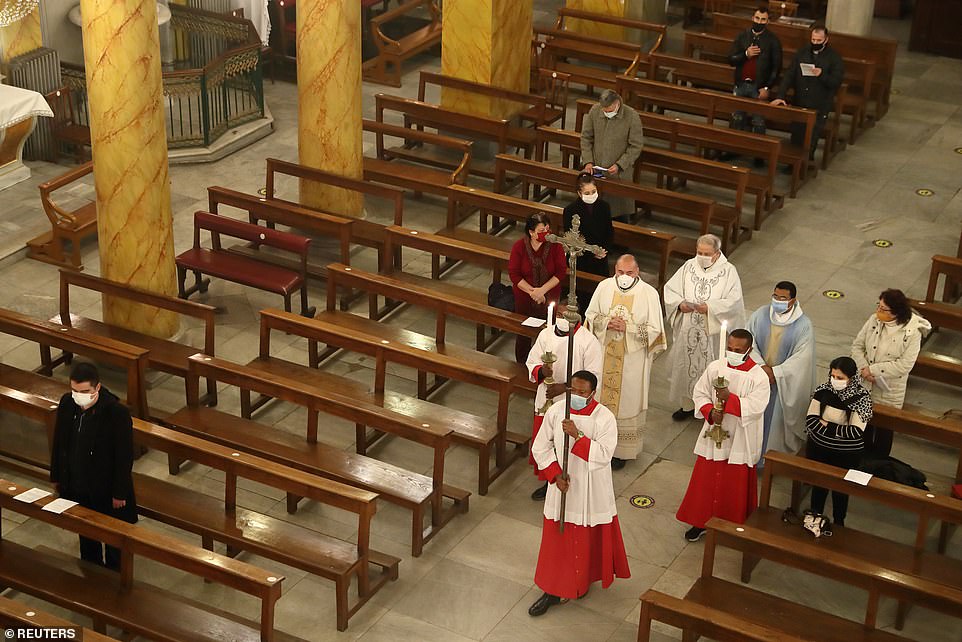 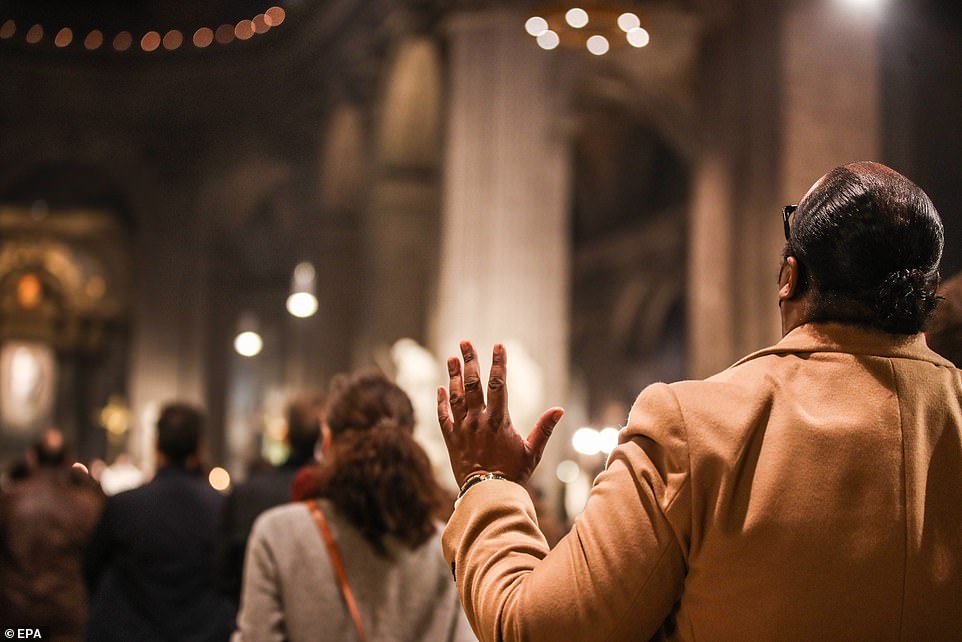 FRANCE: People gather during a family mass for Christmas at the Church of Saint-Sulpice in Paris on Christmas Eve

He said: ‘We often hear it said that the greatest joy in life is the birth of a child. It is something extraordinary and it changes everything.’

A child ‘makes us feel loved but can also teach us how to love.’

‘God was born a child in order to encourage us to care for others,’ said Francis, who has made attention to the poor and unjustly treated a key theme of his papacy.

Celebrations elsewhere in Europe were canceled or greatly scaled back as virus infections surge across the continent and a new variant that may be more contagious has been detected.

In Athens, Christmas Eve was eerily silent. In normal times, voices of children singing carols while tinkling metal triangles can be heard all day. 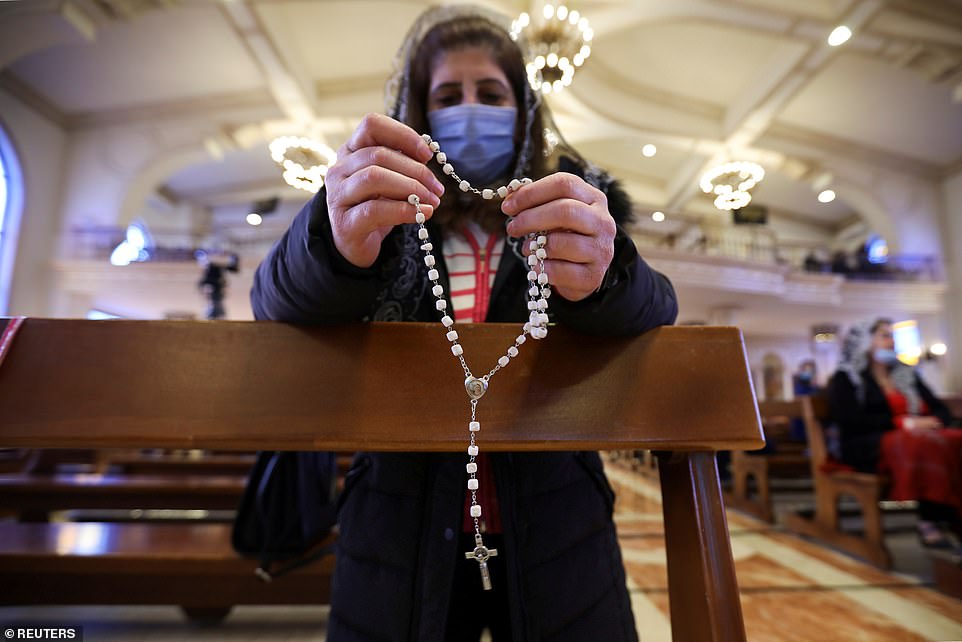 JORDAN: A woman wearing a protective mask prays during a Mass at Church of the Sacred Heart in Amman on Christmas Eve 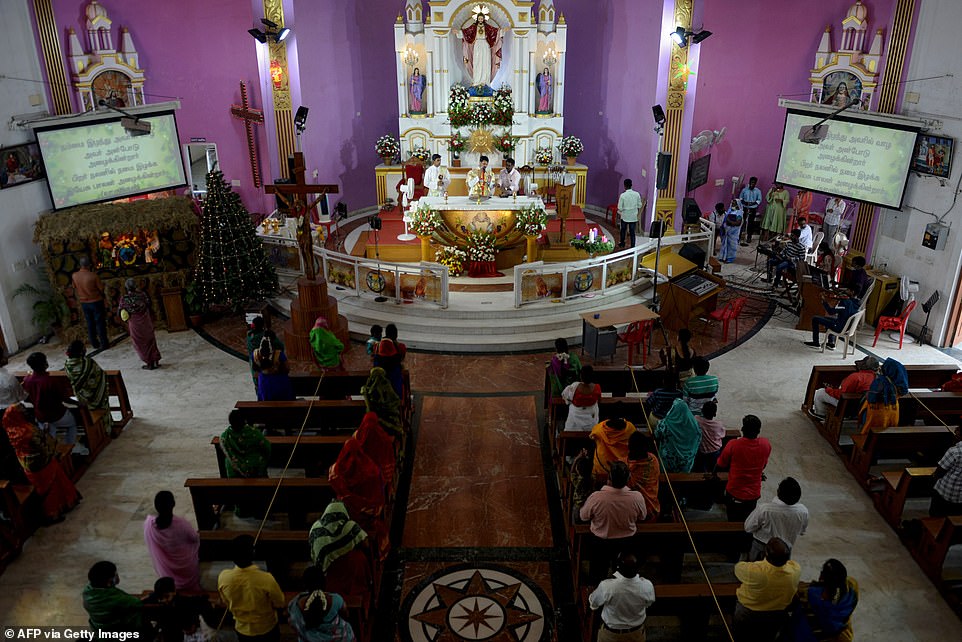 The decades-old custom, in which children go house to house and receive small gifts, was banned this year.

Groups of children managed to honor the tradition by singing to Prime Minister Kyriakos Mitsotakis by video link -including students from a school for children with hearing difficulty who performed in sign language.

Throughout the pandemic, one of the hardest-hit churches in New York City has been Saint Peter’s Lutheran Church in Manhattan.

Church leaders say more than 60 members of the congregation – which numbered about 800 before the pandemic – have died of Covid-19, almost all of them part of the community of some 400 who attended services in Spanish.

Despite their own heartbreaks, congregation members – many of them immigrants – donated coats, scarves and other winter clothes for more than 100 migrant minors at a detention centre in Manhattan. 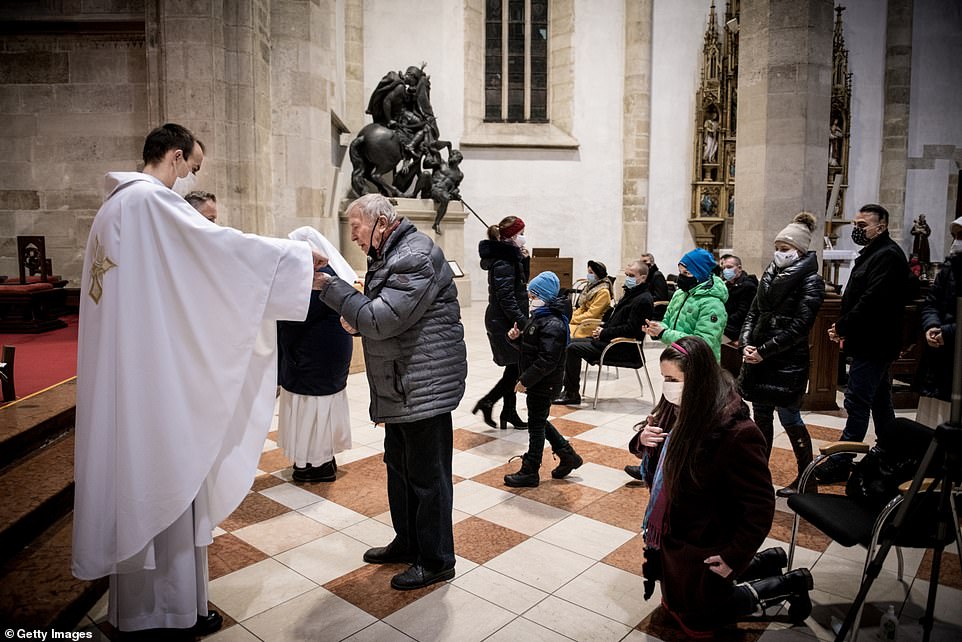 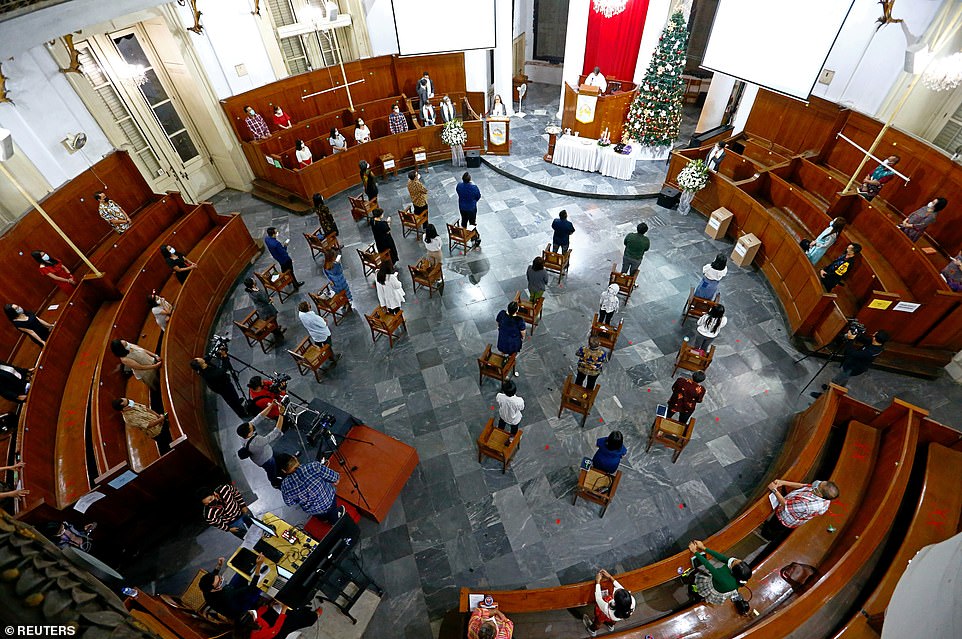 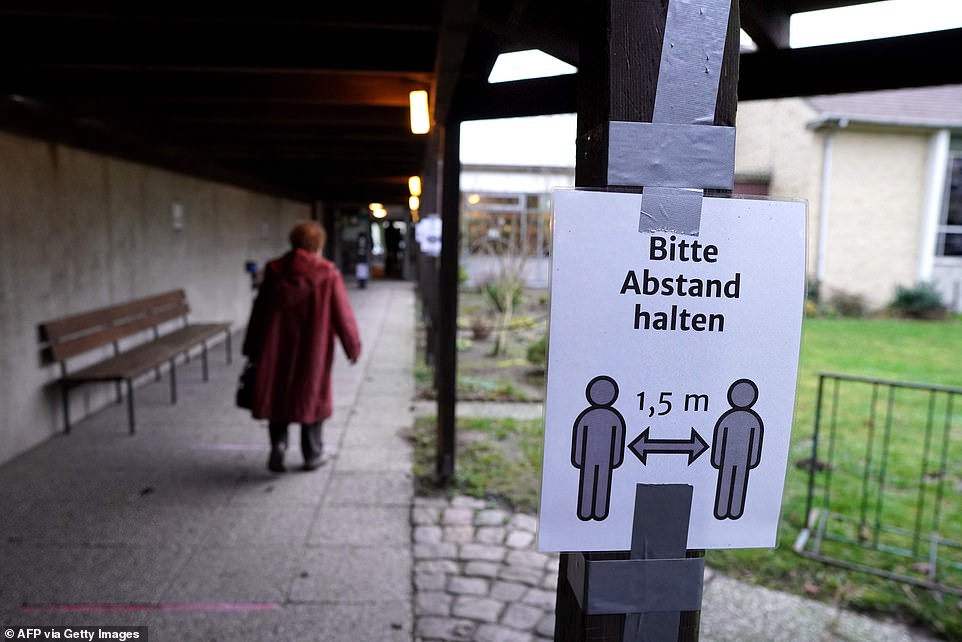 GERMANY: A sign reads ‘Please keep distance’ as a Christian worshipper arrives at the Petrus church in Bremerhaven for Mass yesterday

While many other New York City churches have resumed in-person services, Saint Peter’s continues to offer its Masses only online.

The schedule for Christmas Eve and Christmas day included Masses in English and Spanish, and a bilingual jazz vespers service.

In Bethlehem, officials tried to make the most out of a bad situation.

‘Christmas is a holiday that renews hope in the souls,’ said Mayor Anton Salman.

‘Despite all the obstacles and challenges due to corona and due to the lack of tourism, the city of Bethlehem is still looking forward to the future with optimism.’ 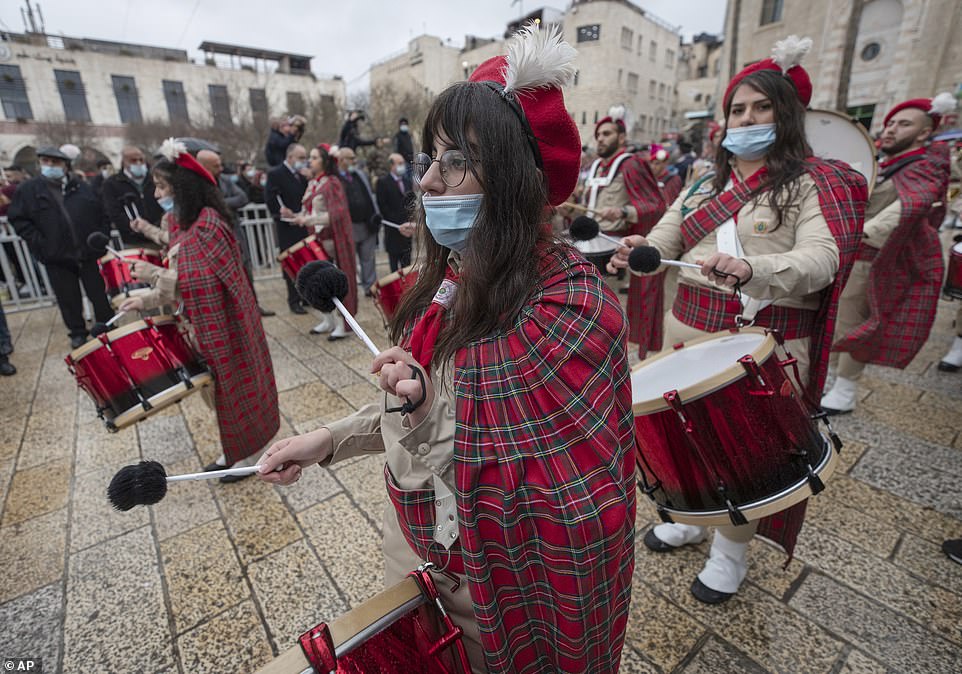 BETHLEHEM: Palestinian scout bands parade through Manger Square at the Church of the Nativity, traditionally recognised by Christians to be the birthplace of Jesus Christ, ahead of the midnight Mass yesterday 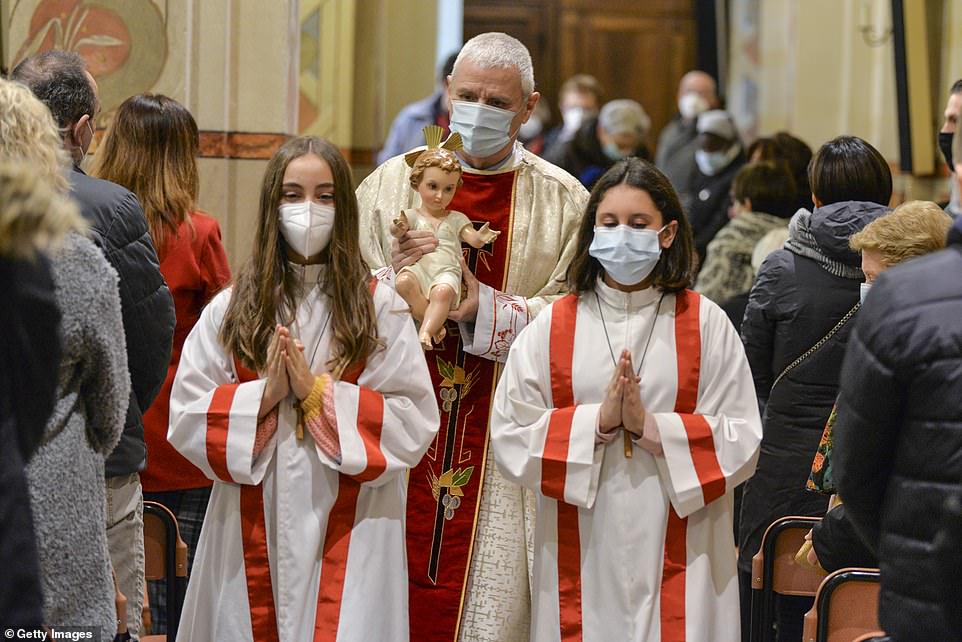 ITALY: Don Carlo Chiomento Parish priest of the Community of Candiolo carries baby Jesus during the celebration of the Holy Mass in Turin on Christmas Eve

Youth marching bands playing Christmas carols on bagpipes, accompanied by pounding drummers, led a joyous procession ahead of the patriarch’s arrival early in the afternoon.

‘Despite the restrictions and limitations we want to celebrate as much as possible, with family, community and joy,’ said Pizzaballa, who was to lead a small Midnight Mass gathering later in the evening. ‘We want to offer hope.’

Thousands of foreign pilgrims usually flock to Bethlehem for the celebrations. But the closure of Israel’s international airport to foreign tourists, along with Palestinian restrictions banning intercity travel in the areas they administer in the Israeli-occupied West Bank, kept visitors away.

The restrictions limited attendance to residents and a small entourage of religious officials. Evening celebrations, when pilgrims normally congregate around the Christmas tree, were canceled, and Midnight Mass was limited to clergy.