It’s been a busy but fun weekend for Chrissy Teigen and John Legend’s two kids.

One day after the acclaimed musician spent his Saturday afternoon playing with son Miles and daughter Luna at a Los Angeles Park, Teigen took her turn and joined her husband in entertaining the children by taking them to Dinosaurs In The Valley in the Woodland Hills neighborhood of Los Angeles.

Afterwards, the expectant mother took to Instagram to give thanks to those working at the dinosaur park, along with a message to fans that she is ‘still pregnant.’

Dinosaur day: A very pregnant Chrissy Teigen, 37, joined husband John Legend, 44, and took their two kids, Miles and Luna, to Dinosaurs In The Valley, which is set up at Pierce College in the Woodland Hills section of Los Angeles on Sunday

It turns out, it was four-year-old Miles who urged his parents to take them to the dinosaur park at Pierce College that boasts life-size and life-like dinosaurs.

‘Left the house to play with dinos! only for you, mr miles,’ the former Sports Illustrated Swimsuit Issue model, 37, captioned a series of snaps.

She ended the post by writing, ‘thank you, @dinosaursinthevalley!’ along with her confirmation that ‘yes still pregnant.’

Her seal of approval for the park actually came one day after arguably the biggest movie star in the world, Dwayne ‘The Rock’ Johnson gave high praise to Dinosaurs In The Valley after he took his family there the previous day.

One photo shows a very pregnant Teigen observing one of the dinosaurs with her growing baby bump visible underneath the oversized black-patterned overcoat she was wearing on Sunday. 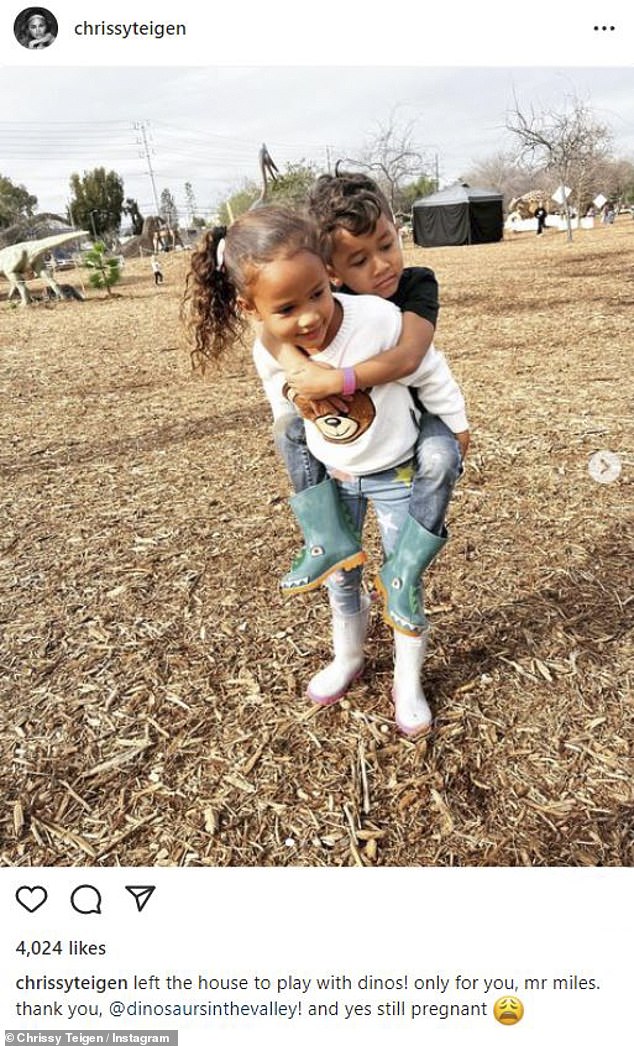 Nudge from Miles: Teigen confessed it was Miles who talked her into going with the family to the dinosaur park 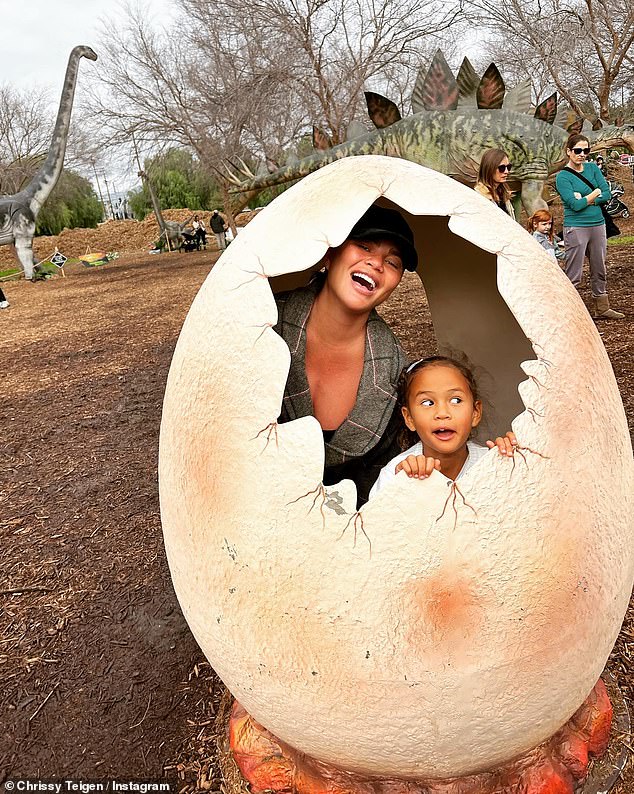 Hatched: The expectant mother flashed a beaming smile while inside a giant dinosaur egg replica alongside six-year-old daughter Luna

Legend, 44, looked to be enthralled by the exhibits in the background of that same photo.

The television personality and entrepreneur also posed with Luna inside one of the large dinosaur egg replicas that had a hole in it.

In an adorable show of sibling love, Miles could be seen hugging his older sister while hanging on her back with his hands around her shoulders.

One of the employees, who was dressed in traditional jungle ensemble, brought one of the baby dino replicas, which looked like either a tyrannosaurus rex or a velociraptor, for Miles and Luna to check out.

The couple, who have been married since 2013, went public and announced their fourth pregnancy in an Instagram post on August 10. They tragically lost their son, Jack, in 2020 following complications during her previous pregnancy. 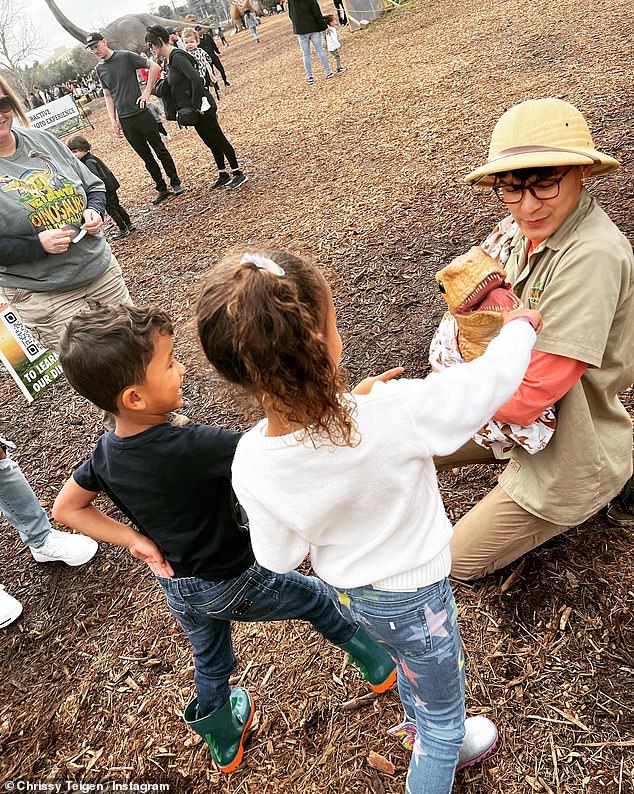 Baby dino: One of the employees brought one of the baby dino replicas, which looked like either a tyrannosaurus rex or a velociraptor, for Miles and Luna to check out 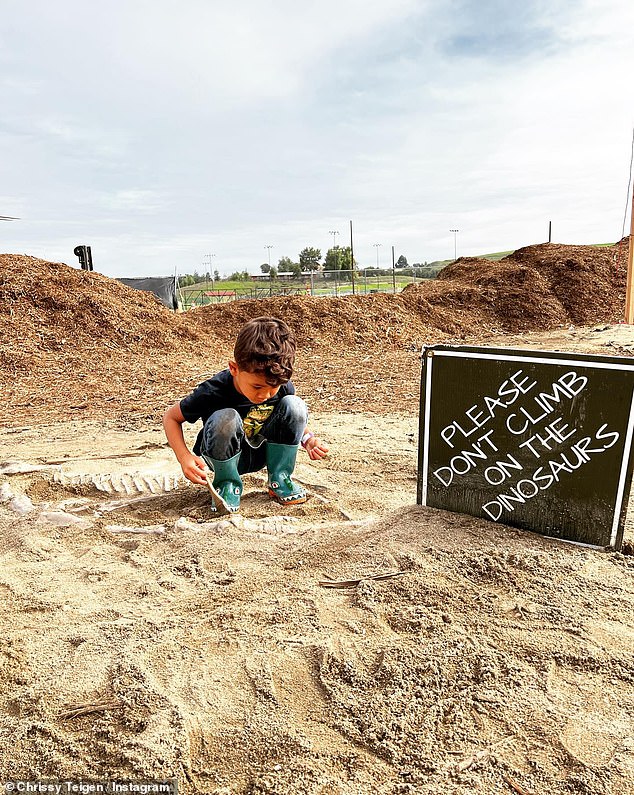 Science man: Miles played the role of paleontologist and checked out dinosaur fossils

The Rock and his family enjoyed the park so much the actor shot a quick video offering his seal of approval that was posted on Instagram and the park’s website.

‘Alright, DJ here. Just finished up dinosaurs In The Valley here at Pierce College, and man what an amazing time. A really an incredible setup. The staff was phenomenal,’ he began.

‘I want to thank my good buddy Matt for taking such great care of our family. But also, you got to come out and check  this out, As a dinosaur lover, and I am a dinosaur [guy], this place is amazing and your family going to love it; the kids are going to love. I was really really impressed. I high recommend so come out.’

Dinosaurs In The Valley’s stay at Pierce College in Woodland Hills has been extended through January 22. 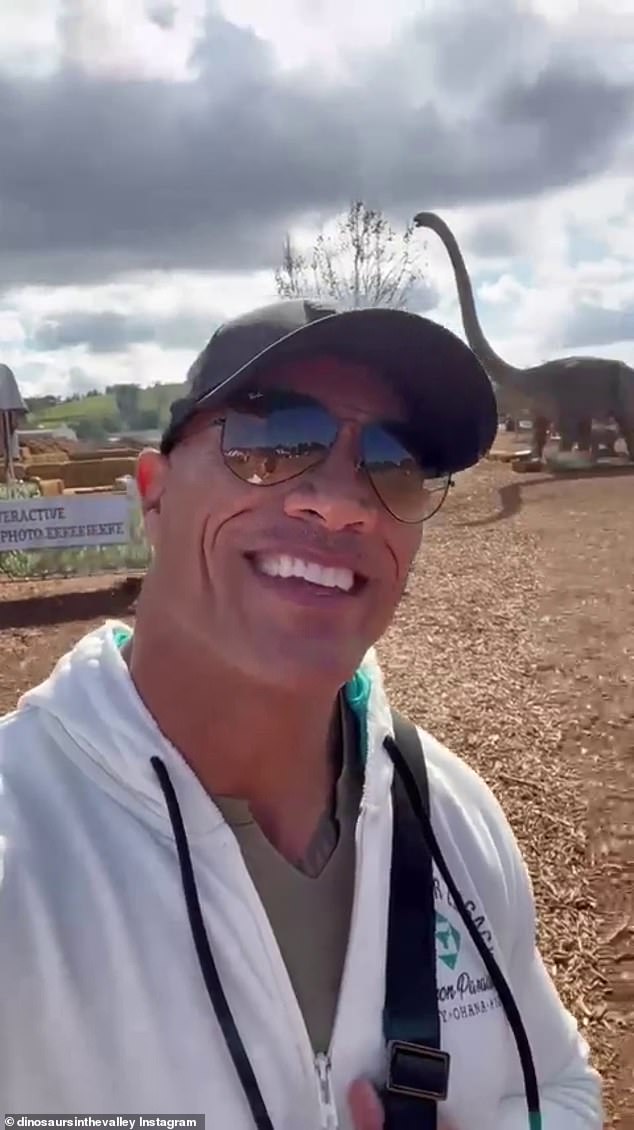 Rock of approval: Dwayne ‘The Rock’ Johnson offered high praise for dinosaurs In The Valley after he took his family there for a visit on Saturday 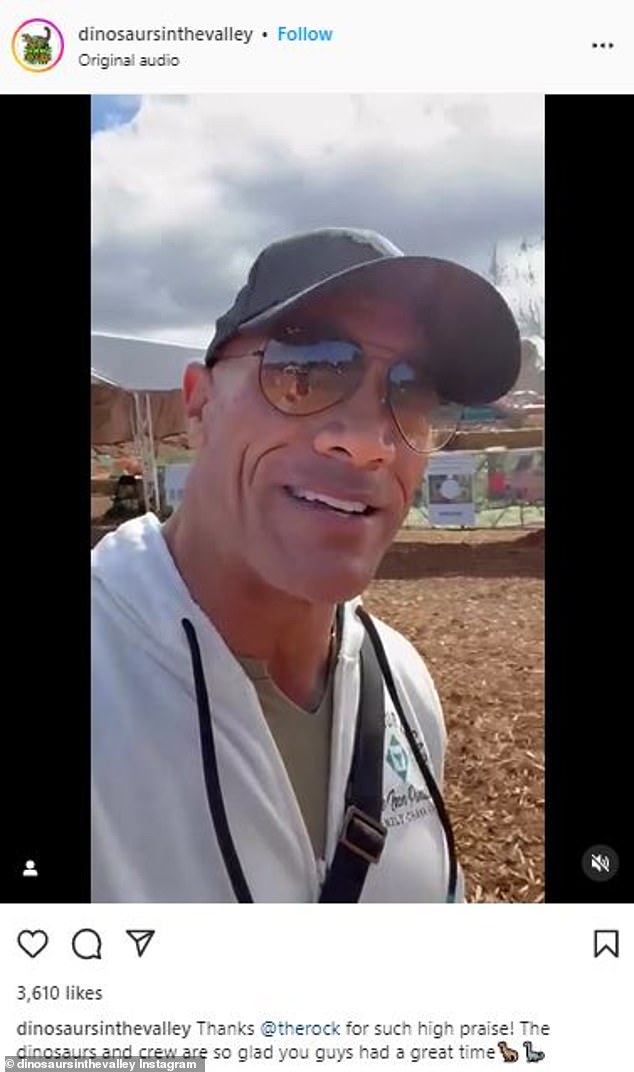 Thumbs up: The Rock called himself a ‘dinosaur lover’ when he recommended people go check out the park full of dinosaur replicas