Did England cricketers have Covid-19 on tour? Chris Woakes admits players have wondered if it was coronavirus that swept through the camp in South Africa this winter

By Paul Newman for MailOnline

Chris Woakes has admitted England wonder if they might have been early victims of the coronavirus when illness swept through their camp on tour in South Africa.

Almost the whole squad were stricken by two sickness bugs, the first a type of flu and the second a stomach problem, that severely weakened England in their heavy first Test defeat at Centurion over Christmas. Now the ‘mystery’ virus might be explained.

‘You do look back on it and kind of wonder,’ said Woakes on Wednesday. ‘We have no idea whether it was or wasn’t but of course it crosses your mind.

‘My symptoms during that time – and I was stuck in my hotel room for a week – were more gastro but there were flu-type issues in there as well. It would be wrong to sit here and say we definitely had coronavirus, but who knows.’

Whether the England team were affected, of course, might become clear as and when they are tested ahead of what seems certain to be a behind closed doors and ‘bio-secure’ cricket season if play is possible later this summer.

Woakes, speaking in a conference call, admitted it would be ‘strange’ to go back into a team environment if the ECB sanction a possible schedule at their board meeting on Thursday and that England are yet to talk about the practicalities of returning to action.

‘You almost can’t see the world ever being the same again,’ said the England all-rounder. 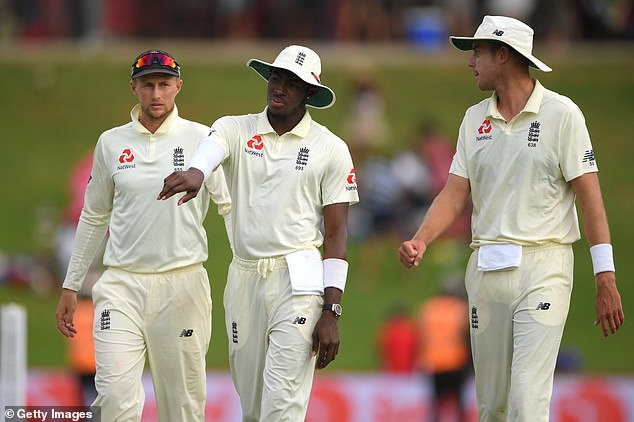 ‘Coming out of this, whenever that does happen, is going to feel strange. Cricket, and being in a team, will change.

‘In the early days on tour in Sri Lanka we were trying our hardest not to make contact with each other and not shake hands but it was easy to forget and accidentally do something we told ourselves we weren’t going to do.’

And Woakes accepts England will be stepping into the unknown if they are asked to fulfil their proposed Test series against West Indies and Pakistan later this year.

‘It’s a tricky one because at the moment we don’t know what people are going to have to do before they go back to sport,’ he added.

‘As sports people we can’t command tests because there are people who need them far more than we do. We are just going to have to sit tight and wait and see what the experts advise.’