Did you know the most endangered species in Britain is the red-necked phalarope?

According to the RSPB, there are fewer than 30 breeding pairs of these small, delicate waders left on our shores. Which is interesting, but also wrong.

I have some breaking news: they’ve just been knocked off their perch by the motorcycle taxi-bike driver. Some strange folk don’t believe there are such things as Limobikes and Limobike riders. 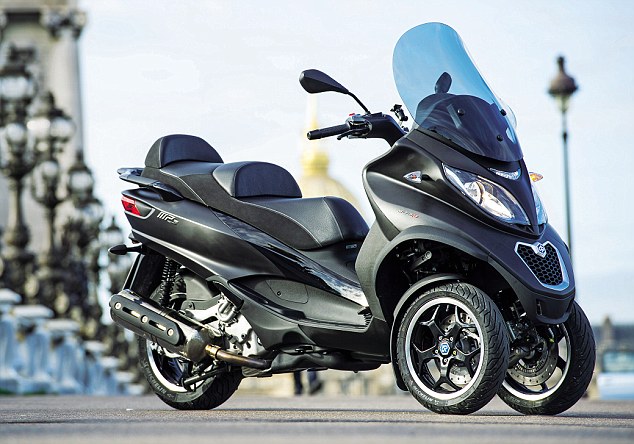 The Piaggio MP3 500 Sport is faultless, so well-balanced and smooth. It may look fatter than a normal scooter but at its widest point it’s the same as most others

They consider them mythical creations like Pegasus and Will-o’-the-wisp, but this is pure folly.

Limobike riders are very much alive and revving, available for hire 24/7, ready to ferry middle-aged fun-seekers who are time poor and cash rich to the cricket, tennis, football – and U2 every other Wednesday.

Their names are Ceri, Russ, Rhys, Kenny, Tim, Pete, Damian and Allan. As you can see, there are only eight of them left, so this biker band of brothers – there has never been a female Limobike rider – really is a rare breed. I’ve been using them to get around London for the past 20 years.

They are the only way I can be guaranteed of getting to where I need to be if time is tight and arriving late is not an option.

My most recent spate of Limobiking was as a direct consequence of having to be at a particular car park in west London – the location for my coach driver training – by 10am after my radio show for a few days a week.

‘I need to get a motorbike of my own,’ I thought to myself, after experiencing their obvious benefits first-hand yet again.

‘But I can’t take any more time away from work or my family preparing for another test.’

‘Stop right there,’ said Mr B, my editor on this column. 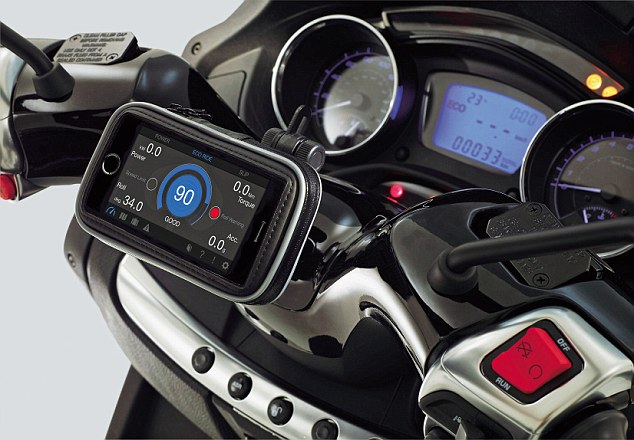 ‘Piaggio may have exactly what you need. Why don’t you test their latest three-wheeler?’

‘Why would I want to do that?’

Mmm, OK, I thought to myself. Nothing wrong with giving an alternative little putt-putt a go for a while.

At least until I can justify going for my CBT (compulsory basic training) and practical bike test sometime next year. Little did I know, however, that this was no putt-putt.

This was 500cc of glorious Italian loophole waiting to be exploited. What a machine. What a revelation.

And 100mph. Are we sure? Within an hour of being given a brief lesson and handed the keys, I was heading west on the A40.

Fifteen minutes later I was flying around the M25 towards Berkshire, the two wheels at the front and the heaps of torque underneath my butt giving me all the confidence I needed.

There I was for the first time in my 50 years on the planet, on a bike, happily holding my own in between the endless lanes of high-sided lorries, white van men and nutcase company car drivers.

Empowered, awakened and invigorated, the next day I couldn’t wait to get wrapped up and zip the 30-odd miles back into town at 5am. I felt so alive – but hey, what was this? 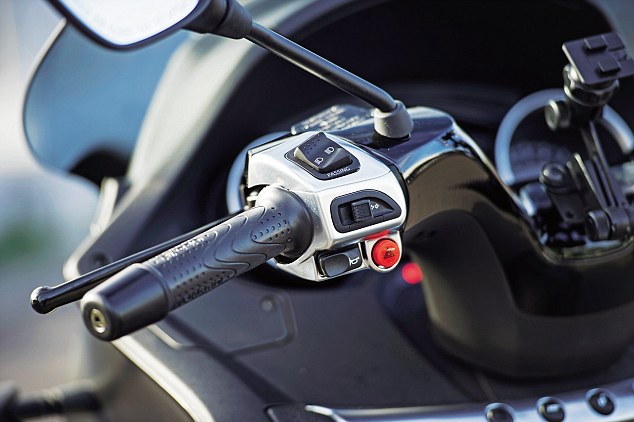 I absolutely loved this machine. For the week I had it, it changed my life. The opposite of a smartphone, it actually gave me back precious hours instead of surreptitiously robbing me of even more

I also felt more hungry than I’ve ever felt before on my way to work. Turns out you can smell every bacon sandwich in the world on a motorbike at that time in the morning.

For the next five days I nipped here, there and everywhere, parking up for just £1 a day as opposed to Westminster City Council’s usual tariff of a million quid a minute.

Constantly wondering why more people don’t ditch their cars for two or three wheels instead of watching their hair turn grey in the rear-view mirror of a vehicle that hasn’t moved for several hours. But what of the MP3 500 itself?

It’s faultless, so well-balanced and smooth. It may look fatter than a normal scooter but at its widest point it’s the same as most others.

And look at the technology on board: automatic transmission, ASR traction control, dual channel ABS braking, ride-by-wire electronic throttle with ECO and sport mapping, height-adjustable windscreen, USB socket and a well of lockable helmet storage space underneath the seat. It even has a carstyle foot brake.

But the coolest thing of all is the electronic suspension lock for freestanding parking at a junction or traffic lights.

What this means is the rider can flick a switch to lock all three wheels into a vertical position when travelling at 5kph or less so the bike remains upright.

You can sit there all day with both feet off the ground freaking out as many people as you like as they wonder how come you’ve not toppled over. 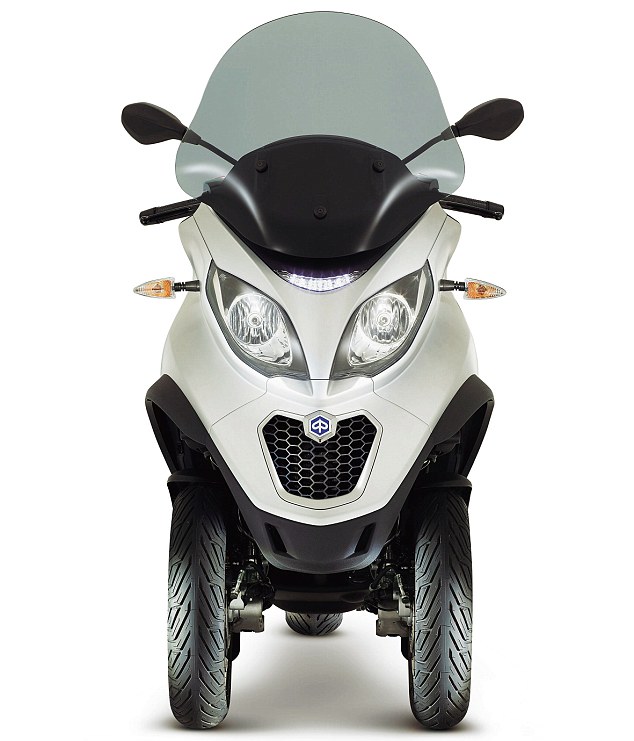 You can’t buy back time, but thanks to this 500cc wonder of modern technology, you can mitigate against future loss. Ace. Ace. Ace

Then when you want to move on again, as the computer senses any application of throttle, it will give you back full control.

The MP3 500 is also comparatively difficult to steal, thanks to a locking handbrake that cannot be disengaged until the key is inserted and the steering lock is taken off.

Oh, and by all means take a friend – there’s loads of room for a pillion and there are grab handles at the rear of the seat.

Again, no additional qualification is required to carry a passenger, as long as you have that car licence and are over 21 years old.

The good news just keeps on coming. I absolutely loved this machine. For the week I had it, it changed my life.

The opposite of a smartphone, it actually gave me back precious hours instead of surreptitiously robbing me of even more.

Of course, one has to be careful – there are a lots of things waiting to squish bikers every time they don their helmet.

But if you ride defensively and do all you can to be seen and be safe, the risk of serious injury is vastly reduced.

Only three of the Limobike boys have had any sort of shunt in the last 20 years. Which is incredible considering how many thousands of riding hours they have racked up between them.

I had to be at a film shoot for the new Top Gear on Monday and back in town for the Spectre premiere later that evening. Couldn’t have done it without my trike.

The next day I had to be at North Weald Airfield in Essex for some vintage bus familiarisation for today’s London to Brighton veteran car run.

Couldn’t have done that and been back in time for my TFI production meeting and to meet up with Tash and the kids for another bonus afternoon of half term shenanigans without my trike.

‘What a machine. What a revelation. It’s faultless, well-balanced and smooth, with plenty of technology on board and clever storage space. I absolutely loved it, and it’s changed my life.’

I devoured the A12, A13, M11, Marble Arch and Hyde Park Corner, all within the first 48 hours. ‘When do I have to give it back?’ I asked Nick, the nice man from Piaggio who dropped it off.

‘You won’t want to,’ he said, smiling confidently. He was right, I didn’t. And I still haven’t.

But I will. In a fortnight when the one I’ve ordered turns up. You can’t buy back time, but thanks to this 500cc wonder of modern technology, you can mitigate against future loss. Ace. Ace. Ace.

If I’m brutally honest, the two front wheels do look a bit daft, but then again so do I most of the time and it doesn’t seem to have done me any harm.

Three is the magic number…

It’s not only the Italians who are encouraging us to try a bit of three-wheeled action.

It comes with a 400cc engine and a few car-like features to tempt buyers, including keyless ignition, tyre-pressure sensors and phonecharging socket. 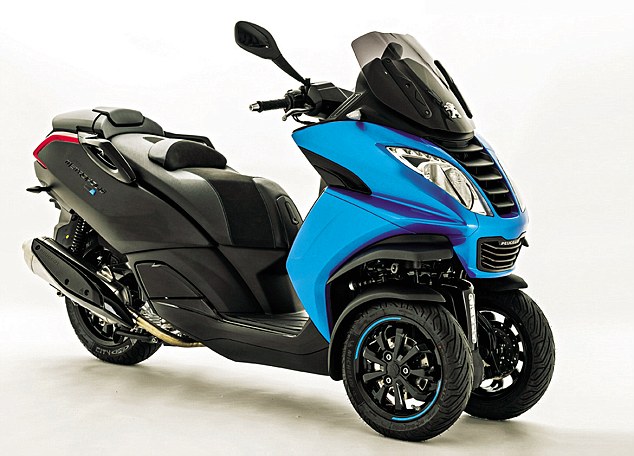 Like the Piaggio, it has a ‘tilt lock’ that can be activated at walking pace or below so that, with practice, you never have to put your feet down in traffic.

And it can be driven on a normal car licence, providing you passed your test before January 19, 2013. 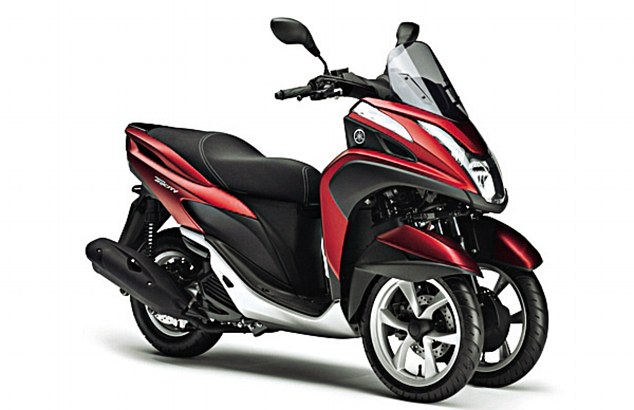 As its front wheels are somewhat close together it is considered more bike than car so you’ll need to stick on L-plates and apply for a learner motorcycle licence to ride one.

Plus, there’s no tilt lock feature, so if you come to a standstill and forget to put your foot down, you’ll fall over.

But take another look at that price! 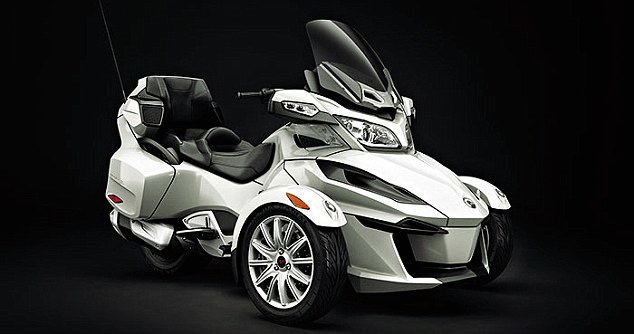 The Can-Am Spyder offers none of the advantages of a car (you’re exposed to the elements) but if you fancy a bit of weekend cruising on something more akin to a traditional trike, it could be the three-wheeler for you

The Can-Am Spyder (from £12,400, uk.brp.com/spyder), meanwhile, offers none of the advantages of a car (you’re exposed to the elements) along with none of the benefits of a motorcycle (at 1.5m wide, you won’t be filtering through traffic, you’ll be sitting in it).

But if you fancy a bit of weekend cruising on something more akin to a traditional trike, with head-turning looks and a powerful 1,000cc engine driving the single rear wheel, it could be the three-wheeler for you.