Chopper comes a cropper: Chinook helicopter gets bogged down in a muddy field after mechanical failure forced it to make emergency landing 20 miles from its base at RAF Benson in Oxfordshire

An RAF Chinook helicopter which had to make a precautionary landing has been grounded in a field for days – after getting stuck in the mud.

The 99ft long military twin-rotor chopper was forced to touch down near Wantage, Oxfordshire on Tuesday due to a mechanical issue.

And it has been stranded 20 miles away from its base at RAF Benson ever since.

The wheels of the 11 tonne £60m chopper quickly began sinking into the waterlogged ground due to recent downpours of rain.

The RAF Chinook, pictured, suffered minor damage after it was forced to perform an emergency landing in a field near Wantage, Oxfordshire on Tuesday night 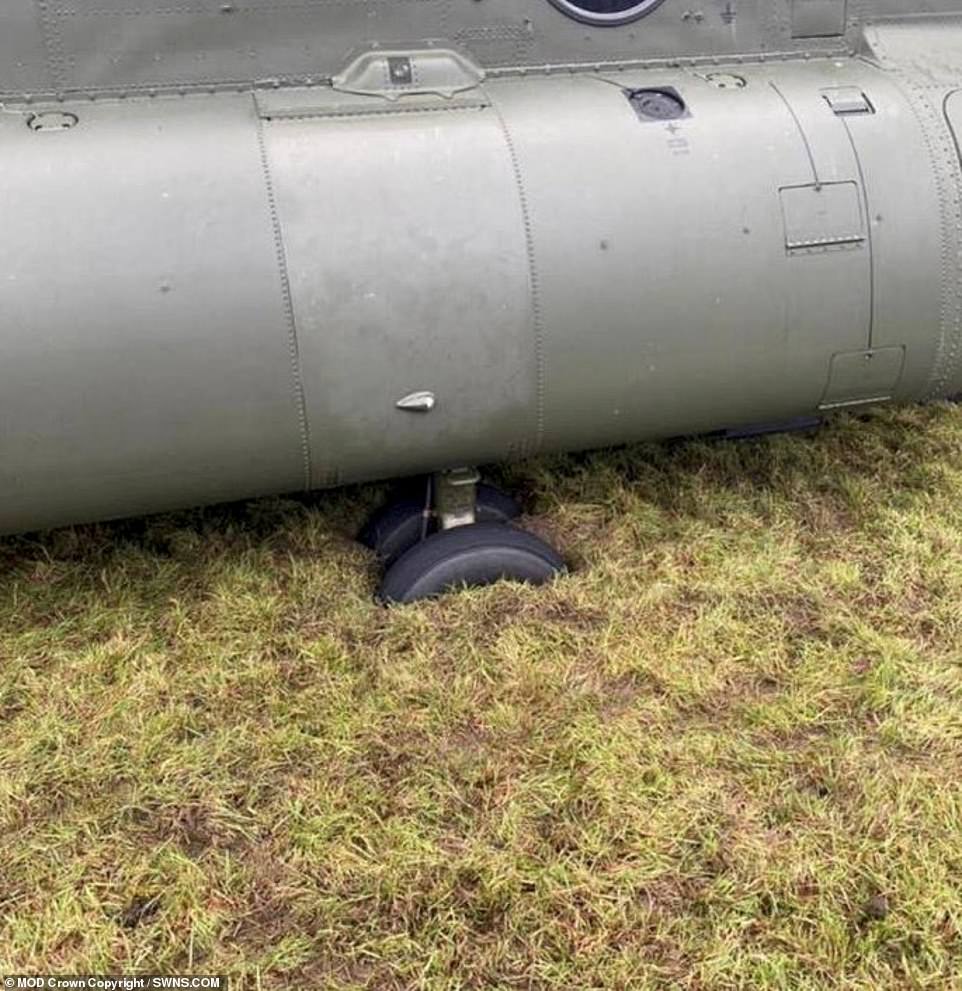 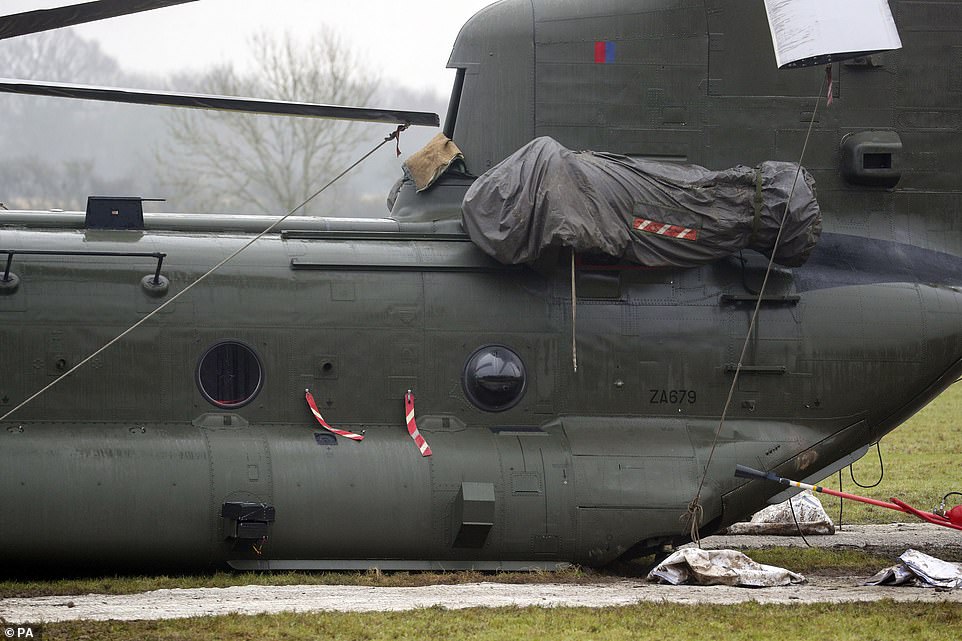 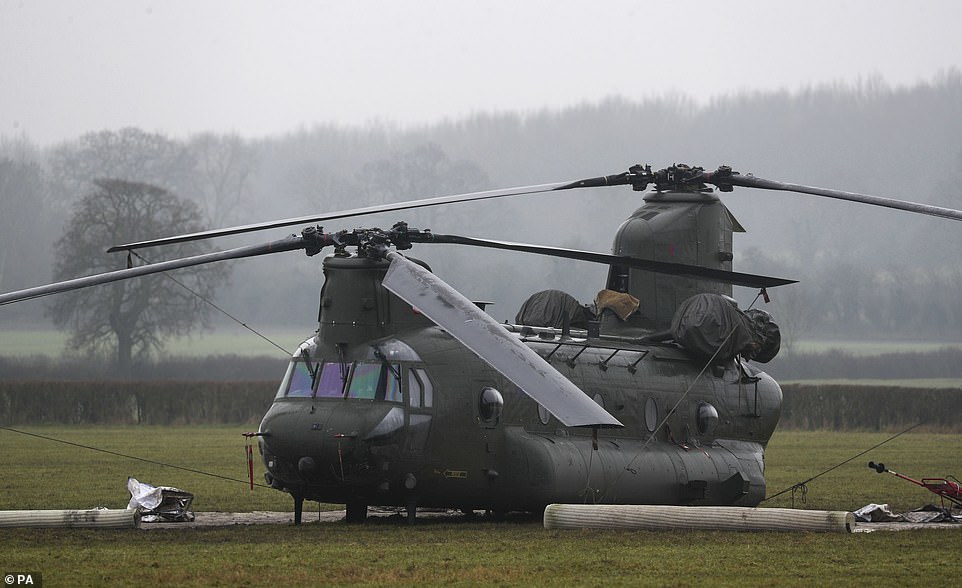 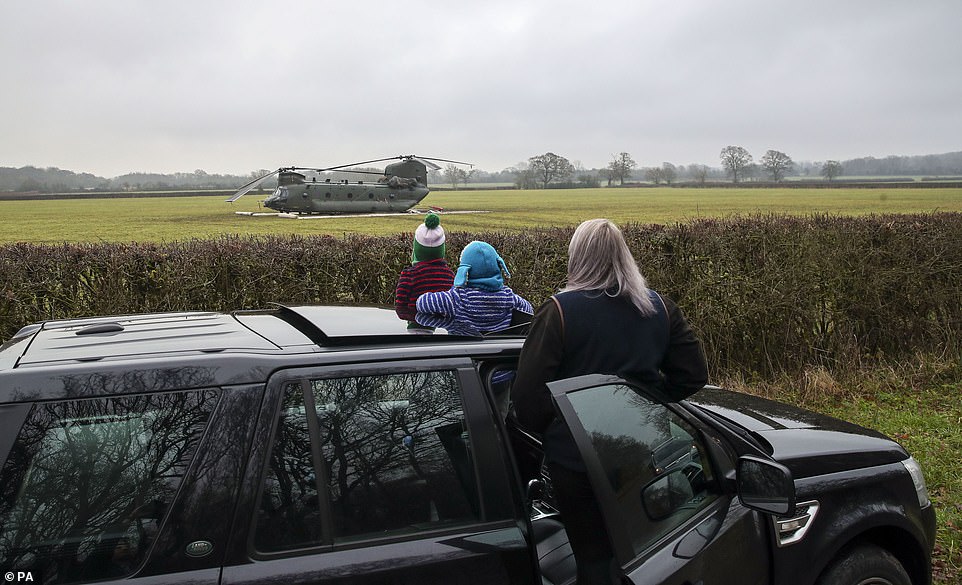 Royal Air Force engineers were deployed to rapidly fix the mechanical issue but the military work horse continued to sink further into the mud.

It was hoped a tri-Service team of specialists could recover it by the end of the week but have been unable to rescue it yet.

A RAF Benson spokesman said in a statement on their Facebook page: ‘While it was hoped that it could simply be dug out and then flown home, the risk of damage to the aircraft from this course of action has been assessed as significant and alternative options are being explored, including potentially lifting it from the mud with a crane.’

They thanked the owners of the field for the ‘kindness they’ve shown to our team guarding the aircraft during some very cold nights’.

The Chinook is from 28 Squadron at RAF Benson – where Prince William’s former 22 Squadron reformed in May last year.

He served in the operational testing and evaluation unit from 2010 to 2013.

After standing down as a Search and Rescue squadron in 2015, the team reformed as the Operational Evaluation Unit for the Joint Helicopter Command.

The RAF has the largest fleet of the distinctive choppers outside of America and is expected to remain in service until the 2040s.

It had 60 Chinooks in active inventory in 2015 and requested to purchase 16 more from the US three years later. 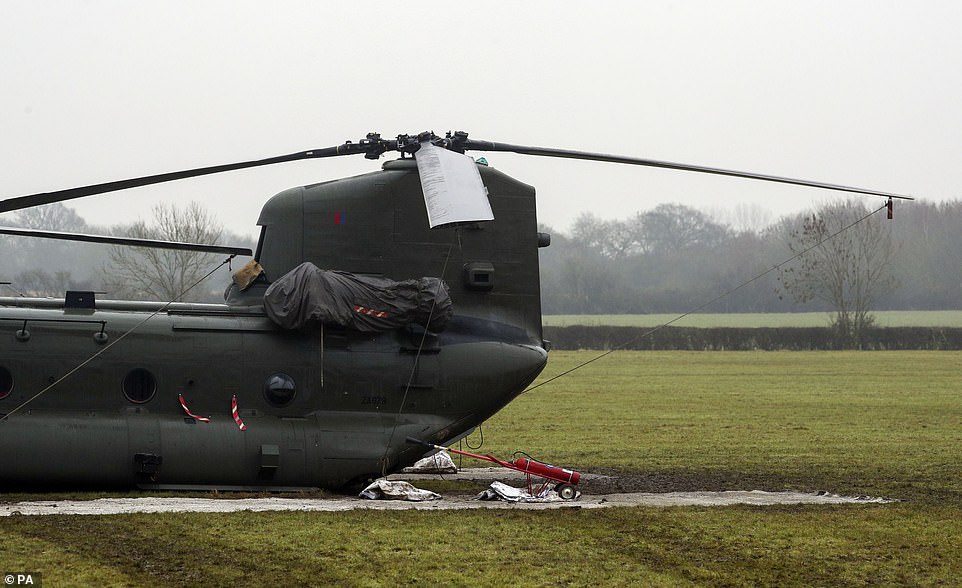 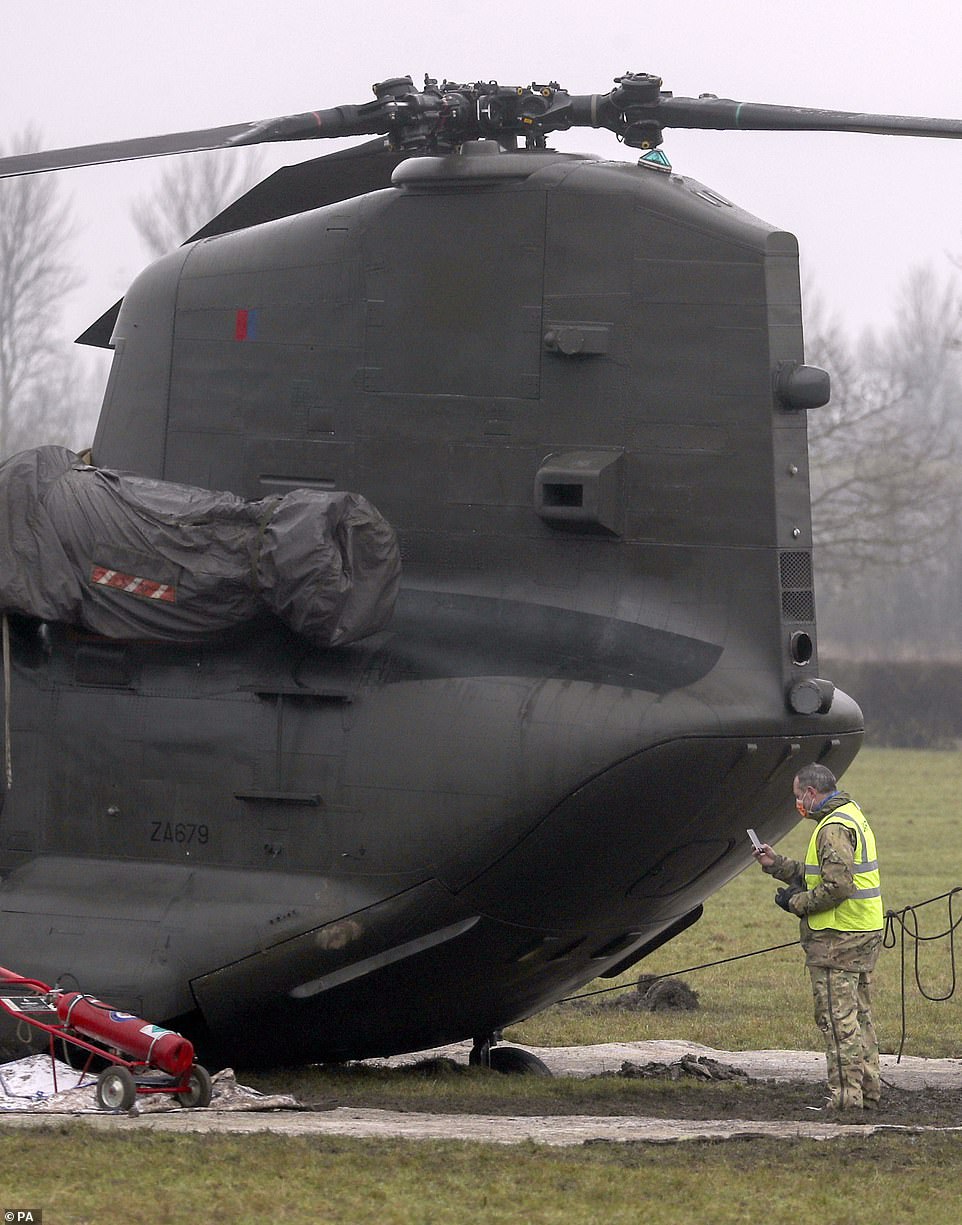 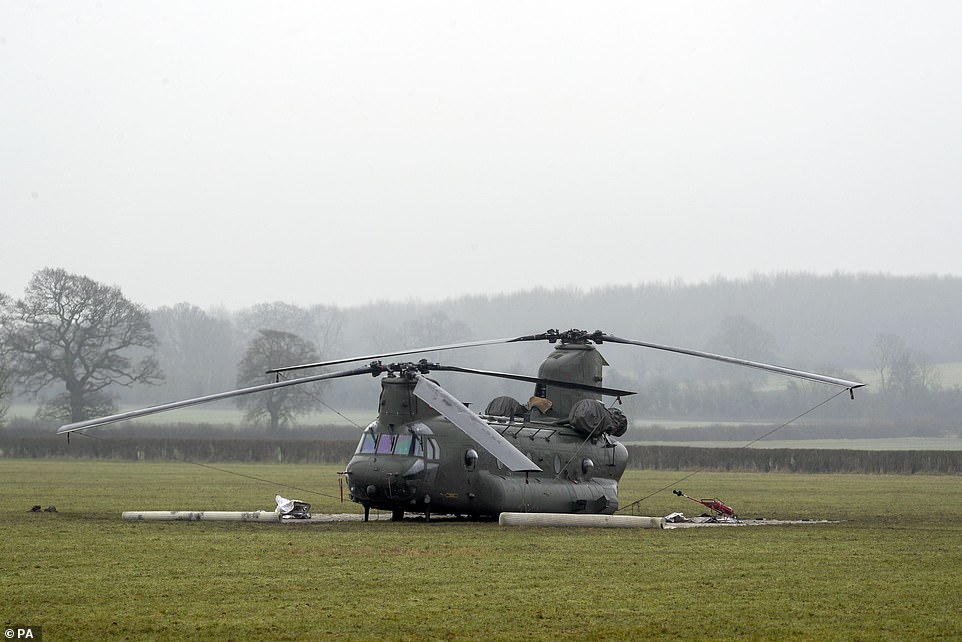 The RAF Chinook is a highly versatile heavy-lift helicopter, able to operate from ships or land bases across the globe.

Since entering service with the RAF in 1981, the Chinook has been operational in the Falklands War, the two Gulf Wars, Afghanistan and as well as in Bosnia, during a UN peace keeping mission.

According to the RAF ‘the Chinook is an extremely capable and highly versatile support helicopter.

It is mainly used for ‘trooping, resupply a and battlefield casualty evacuation’ (casevac). 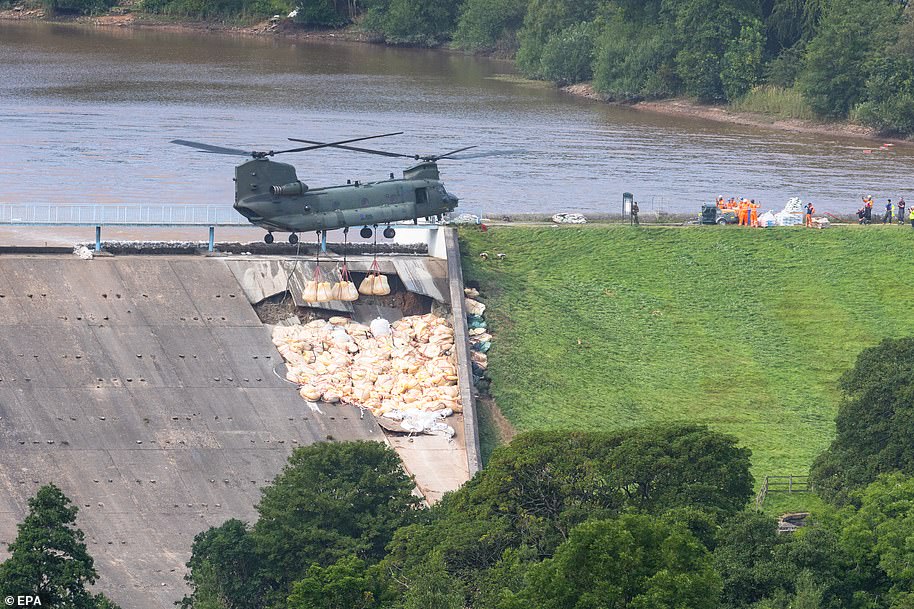 RAF Chinooks were used to drop in giant sandbags at Toddbrook reservoir in Whaley Bridge, Derbyshire in August 2019 showing its remarkable versatility

The helicopter can deploy 55 troops into a warzone or carry ten tonnes of cargo.

As well as military work, the Chinook was used to secure the Todbrook reservoir after a dam faced collapse in August 2019.

It has a maximum cruising speed of 160kts and a maximum altitude of 15,000ft.