China’s state newspaper has lashed out at U.S. President Donald Trump, accusing him of destroying America’s democracy, freedom, and human rights in an escalating diplomatic dispute over the coronavirus pandemic.

‘Numerous people are wondering how the US system can tolerate such a person as a president,’ state-run tabloid Global Times criticizes in an opinion piece.

The article accuses Trump of overturning the American principle by taking an axe to the Washington Consensus, a set of broadly free market economic ideas.

It says: ‘The Washington Consensus is dead, the beacon of democracy, freedom and human rights that the US has long adhered to has collapsed.’

The news came as Trump said on Monday that he intended to bill China more than $160billion for a ‘substantial’ amount for damages caused by the deadly disease.

The threat has ramped up the pressure on Chinese President Xi Jinping to account fully for his country’s actions.

During a press conference at the White House on Monday, Trump said he intended to bill China more than $160billion for the damage the coronavirus pandemic caused after being asked whether he was considering seeking money from Beijing for its response to the pandemic 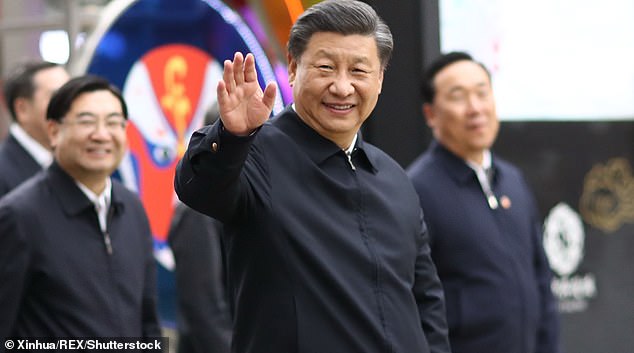 Chinese President Xi Jinping and his government have faced mounting criticism over their handling of the coronavirus outbreak. Many have accused Beijing of covering up the truths

The Global Times commentary was penned by a Beijing-based professor and published yesterday.

Professor Wang Wen, executive dean of Chongyang Institute for Financial Studies at Renmin University of China, starts his op-ed by celebrating the news that some U.S. experts and organizations labeled the U.S. as a ‘failed state’.

He cites a worldwide index of ‘fragile states’, saying the fact that the U.S. has been included on the list shows the government’s vulnerability.

The index is updated every year by Washington D.C.-based think tank Fund for Peace. Last year, the U.S. ranked the 153rd out of 178 countries in its ‘fragility’, before Czech and after Lithuania; while China ranked the 88th tying São Tomé and Príncipe and South Africa.

The author then refers to two columns, one written by American political scientist Francis Fukuyama in 2016 and the other published by The Atlantic in June, to further prove why the Americans regard their country as ‘failed’. 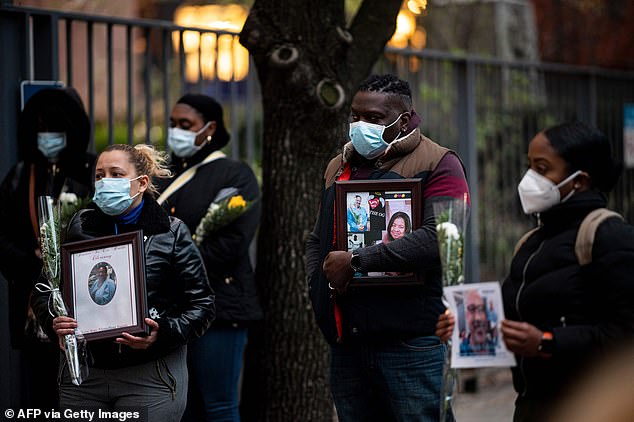 China’s state-run tabloid Global Times has cricitized Trump over his governing policy and his handling of the coronavirus outbreak. Pictured, nurses and healthcare workers mourn and remember their colleagues who died during the outbreak on April 10 in New York City 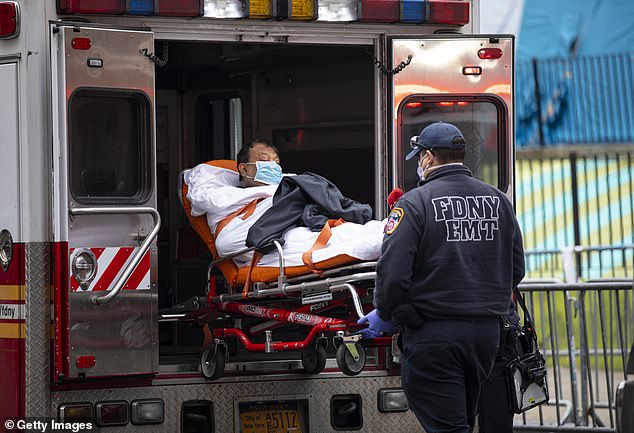 The article rips the U.S. President for his response to the coronavirus pandemic by saying: ‘Over the past three seconds, Trump might have made even more startling statements again’ 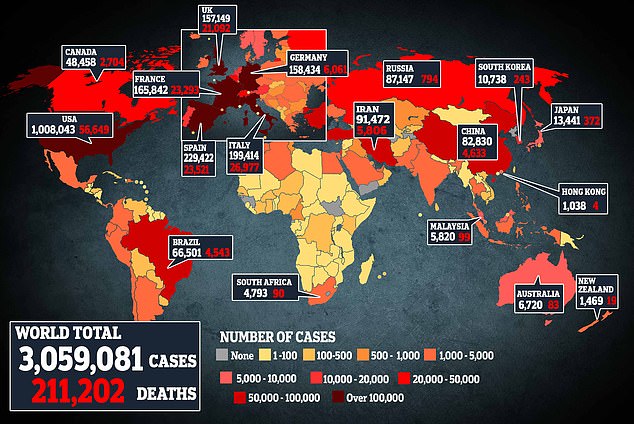 The coronavirus pandemic has killed more than 211,000 people and infected over three million

Professor Wang expresses his solidarity towards American people before continuing to slam Washington for its ‘radical policies’ and ‘stigmatization’ against China.

He accuses that the Trump administration ‘has nearly destroyed the foundation of international order’ and pulled out of many international treaties and organizations in the past three years.

He also condemns the White House for ‘making U.S. dollar the most unstable factor in the global monetary order’ and ‘escalating the international oil price war’. 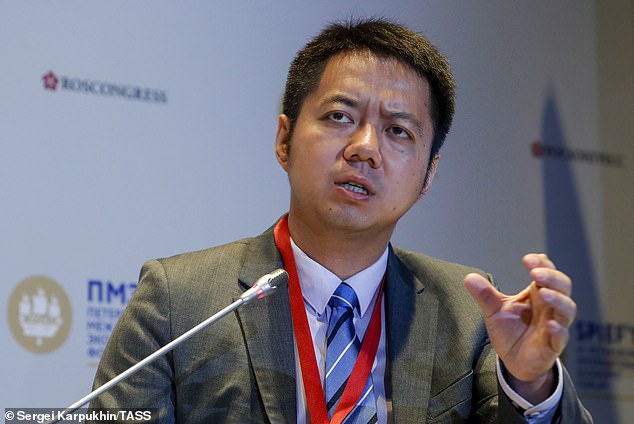 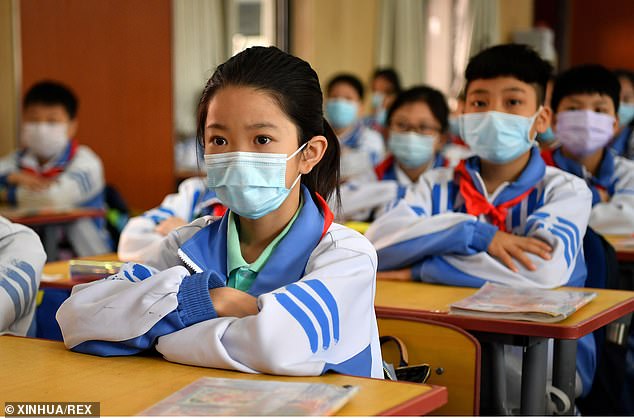 The death toll in China stands at 4,633, according to the latest government report. Students are pictured attending a class while wearing masks in the Chinese city of Xi’an on Monday

The article then rips Trump for his response to the coronavirus pandemic.

It says: ‘Over the past three seconds, Trump might have made even more startling statements again.

‘Numerous people are wondering how the US system can tolerate such a person as a president.

‘The Washington Consensus is dead, the beacon of democracy, freedom and human rights that the US has long adhered to has collapsed.’

The author goes on to bash Washington for siding with Taipei and trying to seek compensation from Beijing over the global health emergency.

‘The signing of the TAIPEI Act and seeking compensation from China for coronavirus losses are without doubt equivalent to clenching its fists and getting ready to throw punches.

‘It is like a bad kid who gets low marks, blames others and even undermines their chances of passing the exam.’

Professor Wang stresses that it is in China’s best interests to ignore the ‘blame game’ from the U.S. and ‘going its own way’.

He concludes: ‘The US is no longer the world’s dominant force, but it is still powerful.

‘If it continues its willful misbehavior, Washington will bring disaster not only to the US, but all of human kind.’ 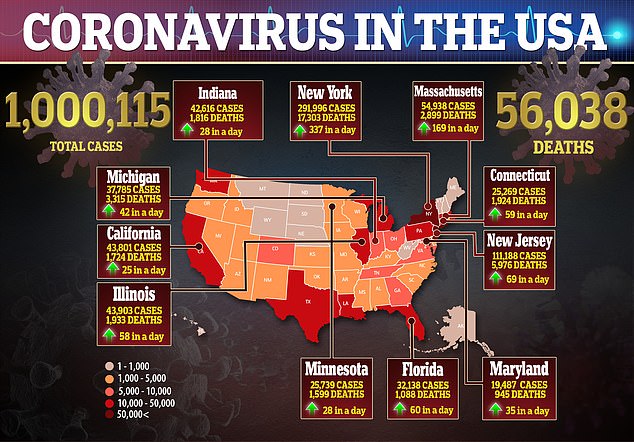 The U.S. is the country worst-hit by the deadly disease, with more than 56,000 killed so far 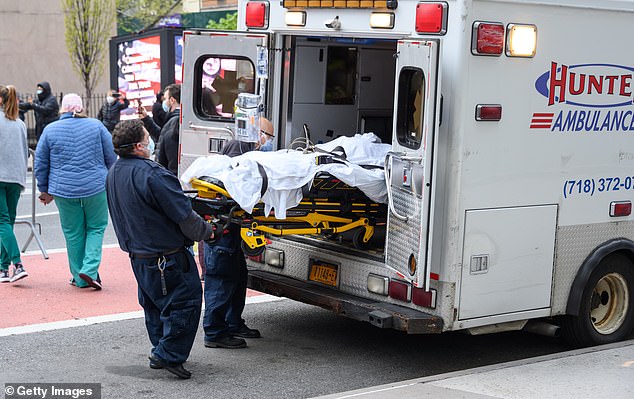 The state of New York is the centre of the outbreak in the U.S. In the picture taken on Monday, EMS workers wheel a patient outside NYU Langone Health hospital during the crisis

Political tensions between the U.S. and China have erupted over the coronavirus crisis.

The U.S. has become the country worst-hit by the deadly disease, with more than 56,000 Americans killed in the outbreak.

In comparison, the death toll in China stands at 4,633, according to the latest government report.

Washington accuses Beijing of covering up the true scale of the outbreak, which led the epidemic to be a pandemic. It also says that it is investigating claims that the pathogen escaped from a virus lab in Wuhan, where the outbreak started in December, during experiments with bats.

Two U.S states, Missouri and Mississippi, have taken legal actions against Beijing for its alleged cover-up of the epidemic.

Beijing criticizes Washington’s stigmatization and accuses it of dodging its responsibilities by diverting people’s attention. A Beijing’s spokesperson, Zhao Lijian, alleged that the virus might have been brought to Wuhan by U.S. troops while the state-run broadcaster CGTN suggested that the virus came from an American lab. 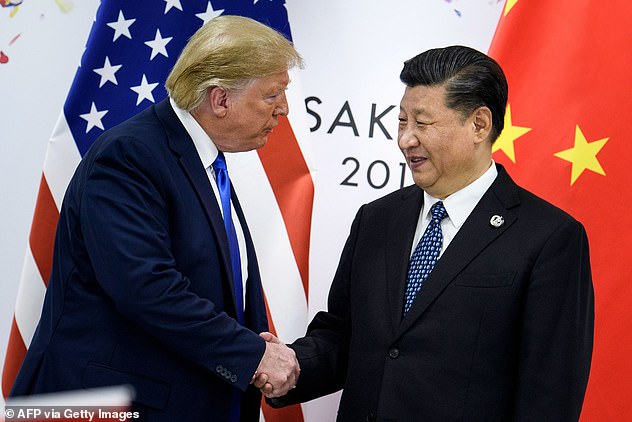 Despite bragging about his great relationship with Chinese President Xi Jinping during the pandemic, Donald Trump on Monday hinted at possible sanctions against Beijing. The two leaders are pictured shaking hands during a meeting at the G20 Summit in Osaka in 2019 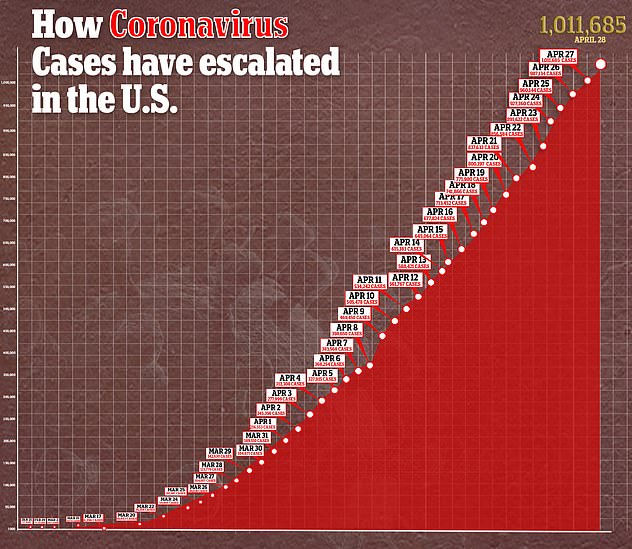 Trump has announced that the U.S. will bill China for the damage Beijing has caused in the coronavirus pandemic.

President Trump has said he will not take responsibility for an increase in people ingesting disinfectant after he suggested its use as a coronavirus treatment be investigated by scientists.

The president managed to mostly avoid questions about his bizarre Friday statement that claimed discussions were being held about researching injecting people with disinfectants.

During a briefing that discussed how disinfectants can kill coronavirus on nonporous surfaces, Trump said last week pondered whether there was ‘a way we can do something like that, by injection inside or almost a cleaning’.

Household cleaning brands Lysol and Clorox have had to issue statements against ingesting disinfectants.

Trump later claimed he was being ‘sarcastic’ but on Monday he briefly addressed the matter when asked about Maryland Gov. Larry Hogan’s statements that his state was flooded with calls to emergency hotlines from people asking about disinfectants.

‘I can’t imagine why,’ he said. When probed about whether he takes responsibility, the POTUS replied: ‘No, I don’t.’

During a press conference at the White House on Monday, Trump made the threat to China after being asked whether he was considering seeking money from Beijing for its response to the pandemic.

The idea of seeking reparations from China came after a German newspaper published a mocked-up bill of a $160billion invoice for the impact shutdowns have had on the economy following the spread from Wuhan to Europe.

The President claimed he had a ‘much easier’ idea and claimed he was planning on obtaining much more than what the Germans were suggesting.

China’s role in trying to cover up the extent of the virus when it first came to light has been used to blame the Communist country for the spread of the disease around the world and preventing other countries from being prepared.

President Trump has been one of the most vocal world leaders in attacking the authoritarian regime and has sort to shift culpability from his own administration’s response to Beijing.

‘We have ways of doing things a lot easier than that,’ Trump told a coronavirus press briefing Monday in Washington DC.

Last week German paper Bild calculated an ‘invoice’ of nearly €150billion (around $162billion) in economic damage to Germany because of the crisis.

The idea of charging reparations to China is not endorsed by the German government, with Minister of Foreign Affairs Heiko Mass describing the concept as ‘illusory’.

The coronavirus pandemic has killed more than 211,000 people and infected over three million worldwide.