By Glen Owen and Jake Ryan For The Mail On Sunday

A  high-level probe into Chinese ‘spies’ working in British universities could lead to arrests within weeks, The Mail on Sunday has been told.

Specialists at the Foreign Office, Special Branch and HMRC have drawn up a list of academics suspected of passing sensitive information to Beijing, including pioneering British technology that could be used to aid the repression of minorities and dissidents.

Investigators are understood to have ‘established a correlation’ between universities which earn significant income from students from China and the activities of staff which have prompted suspicion.

Universities under scrutiny include Manchester and Imperial College, which earn 26 per cent of their income from students from China; Liverpool and Sheffield (28 per cent); and Oxford and Cambridge (10 per cent).

Government specialists have drawn up a list of academics suspected of passing sensitive information to Beijing, including pioneering British technology that could be used to aid the repression of minorities and dissidents

There is no suggestion any of the institutions are aware of, or complicit in, any wrongdoing.

Last year it was revealed that a third of non-EU university students in the UK come from China, with 120,000 paying a total of £2.1 billion in fees.

The investigation was launched amid fears academics were engaged in a ‘gold rush’ to strike deals with the Communist state over scientific breakthroughs.

In February, The Mail on Sunday revealed MI6 officers, seconded to the Foreign Office, were leading an investigation into more than a dozen universities for potential breach of export controls.

It also emerged that almost 200 British academics were being investigated on suspicion of unwittingly helping the Chinese government build weapons of mass destruction.

Anyone found in breach of the 2008 Export Control Order faces a maximum of ten years in prison.

Earlier this year, Manchester University cancelled an agreement with a Chinese military technology company after it was warned it had supplied apps used by Beijing’s security forces in the mass surveillance of Uighurs.

The university said it was unaware of China Electronics Technology Corporation’s alleged role in the persecution of Muslims until it received a letter highlighting the links from the Commons Foreign Affairs Committee.

Manchester co-operates with Chinese funders to exploit graphene, a revolutionary material that is seen as having huge military potential because of its immense strength and flexibility. 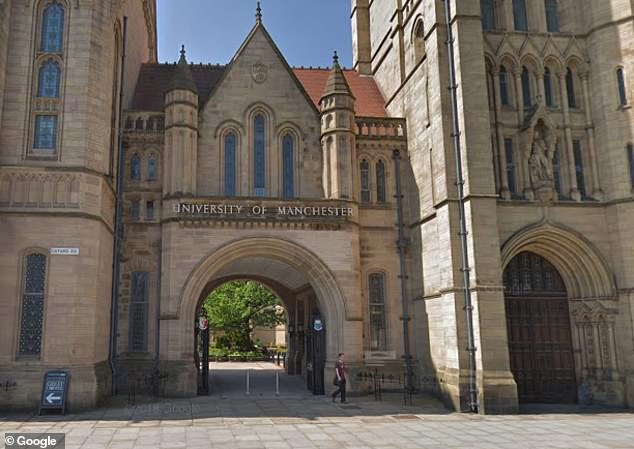 Universities under scrutiny include Manchester (above) and Imperial College, which earn 26 per cent of their income from students from China; Liverpool and Sheffield (28 per cent); and Oxford and Cambridge (10 per cent)

In February, a report by the think-tank Civitas accused 14 of the UK’s top 24 universities of having ties with Chinese weapons conglomerates and military-linked research centres.

Earlier this year, a survey of students by the Henry Jackson Society think-tank discovered that 899 Chinese nationals were studying militarily sensitive subjects in the UK, including nuclear physics, aerospace engineering and high-tech material science.

The Foreign Office has previously said it would be tightening vetting rules for advanced overseas students of technology.