Chinese boy, 12, who shoved a THERMOMETER down his penis needs it surgically removed from his bladder after pushing it too far

X-rays revealed the thermometer had been inserted so far into the urinary tract that it had actually entered the boy’s bladder.

Medics were worried that yanking it out the way it came would damage the boy’s organs, so extracted it from the youngster’s bladder through key-hole surgery. 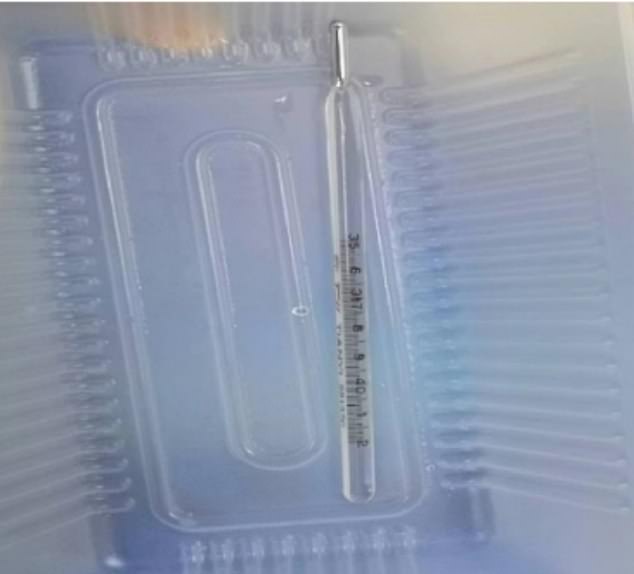 What is sounding? And why can it be dangerous?

Sounding is when men insert items into the opening of the penis to enhance their sexual pleasure.

It usually involves specially designed tools made from glass or metal.

Men interested in the practice should understand the risks and purchase equipment from reputable businesses and ensure they do it hygienically.

But they warned the practice can damage the sensitive tissue in the urethral pathway, which releases urine and sperm.

It can also lead to a lack of bladder control and infection.

And the penis and urethra may even require surgery or implants to rebuild sensitive tissue.

The boy, from the city of Chengdu in central China, admitted to doctors at The First People’s Hospital of Longquanyi District that he had inserted the thermometer for sexual pleasure, a risky practise known as sounding.

Sounding carries multiple risks, such as the object getting stuck or lost, as in the boy’s case, damaging or scarring the internal tissues, and perforating the bladder.

Some of these injuries can occur as medics extract the item, or involve major surgery into the bladder itself, hence the surgeons’ caution in this case.

Instead of pulling it back out the way it came the urologists, who detailed the case in the Asian Journal of Surgery, opted to instead go through the bladder.

They made a tiny surgical hole in the tissue to the bladder, which normally stores urine, and then inserted tiny tools to manipulate the thermometer to the correct angle and position to pull it out through key-hole.

The operation was a success though the medics did not detail if the boy had suffered any long-term complications from his misadventure.

The date of incident was not revealed in the case report.

In the UK, experts have previously reported a rise in the number of men having sounding issues over the past few years.

USB cables, wires, and nuts and beans are just some of items that have reported being used for sounding.

While sexual misadventure is main reason people end up with object stuck in their urethra, other known causes include mental health problems and extremely ill-advised DIY attempts to cure problems with urinating or maintaining an erection.

One factor that can make cases like the 12-year-old boy’s ordeal particularly dangerous is the time spent not seeking medical attention.

Patients who get an object stuck in their penis can be hesitant to contact a doctor or seek medical help due to feelings of shame or embarrassment, a delay that can lead to further or more serious medical problems.

Dozens of patients treated in corridors, 40-hour A&E waits and warnings to think twice about calling 999: Is YOUR hospital affected?

NHS is treating Britons addicted to… ANGRY BIRDS: Over 200 people were sent for therapy last year after getting hooked on games like War Zone, Fortnite and FIFA