Is this the END of Australia’s row with China? Top official lavishes praise on more Beijing-friendly Labor government – and cheerfully sips a glass of red wine

The Chinese ambassador to Australia thanked the Labor government for an ‘extraordinary year’ and hinted at China’s willingness to rebuild relations.

Xiao Qian told reporters in Canberra on Tuesday the last 12 months has been a ‘positive, constructive and productive’ period.

Mr Xiao said the Communist superpower was open to cooperation following the election of Anthony Albanese as Prime Minister and end to the Coalition government.

‘The Labor government came to parliament last May, it did offer an opportunity for China and Australia to reset the relationship between our two countries which had been going through a difficult time over the last couple of years.’

The ambassador raised a glass of wine at the New Years Press Gathering and explained meetings between Albanese and China’s President Xi Jinping, as well as Foreign Minister Penny Wong’s visit to Beijing had assisted in mending relations.

Mr Xiao added both sides will not allow ‘difference to hijack’ the relationship but admitted disputes over areas such as trade need to be worked on ‘in constructive manner’.

‘This relationship is important for both sides and both sides should work together to improve, to uphold and to develop the relationship,’ Xiao said.

‘Both sides agree to address these differences in a constructive manner [and] in a way that will not allow the differences to hijack the overall relationship.’

The ambassador explained China was willing to work with Australia to tackle climate change, labelling green energy and electric cars as ‘new frontiers’. 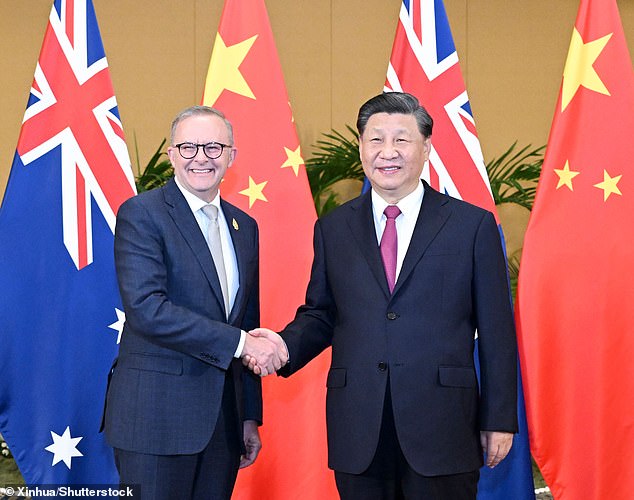 In recent years, relations between the nations have been strained, with China imposing $20 billion-a-year trade sanctions in 2020.

The World Trade Organisation’s findings into Australia’s barley and wine sanctions are due later this year.