At a congress of the Chinese Communist Party (CCP) last week, Xi said the government would ‘never promise to give up the use of force’ to unify Taiwan with the Chinese mainland, although he added it would continue ‘striving for the prospect of peaceful reunification.’

Alicia Kearns, chairman of the House of Commons foreign affairs committee, warned Xi’s language meant the UK ‘must be prepared for more robust provocations towards Taiwan’.

Pride: Taiwan’s flag is flown across the capital, Taipei  last month amid rising tensions with China

The Tory MP added: ‘We can’t naively wish the possibility of military action away.’

Analysts and politicians have warned an invasion would spark an international political and economic crisis even graver than the war in Ukraine, with the US potentially being drawn into a confrontation with China following previous commitments to defend the island.

Tensions escalated in August when Nancy Pelosi, speaker of the US House of Representatives, visited Taiwan, enraging Beijing which responded with large-scale military exercises and missile tests close to the island.

Tory MP Bob Seely, a member of the foreign affairs committee, said any invasion of Taiwan would cause ‘an extraordinary shock not seen since World War One or World War Two’.

The sentiment was echoed by Rory Green, chief China economist at forecasting consultancy TS Lombard, who said the outbreak of war would be ‘a massive disaster’ for the economy, worse than Covid-19.

Of particular concern is Taiwan’s computer chip industry, which dominates the global market.

Taiwan Semiconductor Manufacturing Company (TSMC) has an effective stranglehold on the sector with the company making over half of the world’s computer chips, more than treble the amount manufactured by its closest competitor, South Korea’s Samsung.

There are worries China would use an invasion to take control of the vital technology, while any damage to TSMC’s factories during a conflict would cause a supply crunch and threaten the production of everything from cars to smartphones.

A report published last night by the Henry Jackson Society (HJS), the foreign policy and national security think tank, cautioned that Beijing’s growing military presence in the Taiwan Strait – the 110-mile stretch of water that separates the island from the mainland – risked escalating hostilities and inflicting ‘chaos’ on global supply chains.

It also called on the Government to reduce its reliance on China so that sanctions could be imposed while ‘minimising damage to the UK economy.’ 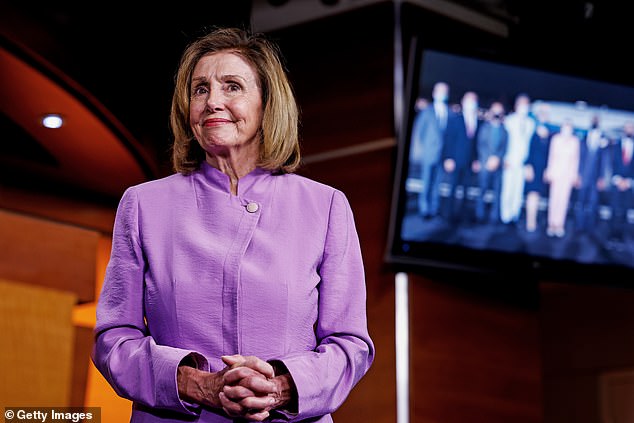 Tensions escalated in August when Nancy Pelosi (pictured), speaker of the US House of Representatives, visited Taiwan, enraging Beijing

Britain has already moved to reduce the influence of Chinese companies, notably by restricting the use of technology developed by telecom giant Huawei in the UK’s broadband networks.

But it still remains heavily dependent on the country for trade. In June, data from the Office for National Statistics (ONS) showed the UK imported nearly £64billion worth of goods from China last year, making it Britain’s largest import partner.

Seely warned that more work was required to shift the UK’s supply chains away from China. ‘We now need to wean ourselves off this ridiculous economic dependency on an increasingly dictatorial one-party state.’

He added: ‘We are putting ourselves in danger.’

Taiwan broke away from mainland China in 1949, when Chiang Kai-shek’s nationalist forces fled to the island to escape Mao Zedong’s advancing communist army.

Since then, it has effectively functioned as an independent country, although it remains unrecognised by many nations due to diplomatic pressure from Beijing, which considers Taiwan to be part of its own territory.

The unification of the island with the mainland forms a key part of Xi’s plan for a ‘great rejuvenation’ by 2049, the 100th anniversary of the founding of the People’s Republic of China.

But there is growing speculation an invasion could occur soon after delegates at last week’s congress handed Xi an unprecedented third five-year term as China’s leader while a reshuffle saw the top ranks of the government packed with loyalists, meaning there is likely to be little resistance to his ambitions.

The HJS said this cementing of Xi’s power and the growing authoritarianism in Beijing made it even more vital for the UK to extract itself from China’s influence.

‘Mitigating the UK’s economic dependence on China is long overdue,’ the HJS added.