China’s economy is predicted to suffer its worse crash for 60 years with a shrink of nearly 10 per cent due to the coronavirus lockdown.

Compared to the previous three months, China’s economy is forecast to be almost 10 per cent down and could see a 6 per cent drop on last year.

Financial data released this week shows analysts expect China’s first-quarter GDP to suffer due to the economic shutdown caused by the pandemic, which began in Wuhan and was first reported at the end of December.

A global slowdown has also led to a collapse in the oil price, exacerbated by a row between Opec and Russia.

A deal was agreed on Friday to cut supply by a record 10 million barrels a day, but it remains to be seen if this will lift the price. 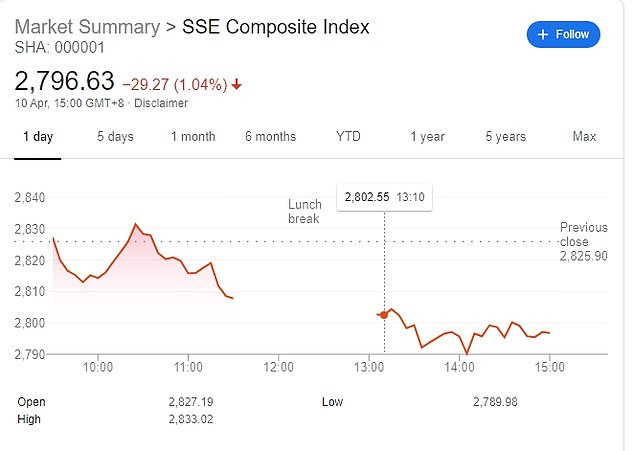 China’s economy is forecast to be almost 10 per cent down compared to the previous three months. Shanghai stocks slid on Friday with bleak factory gate data then bounced back

The effect of the lockdown on China’s economy is thought to be an indicator of what European and US markets could expect to see once they start to relax restrictions.

Experts have warned the huge impact on finances, businesses and consumer spending could see the UK economy shrink by as much as 15 to 25 per cent over the coming weeks and months.

Globally, at least 1.7 million people have been infected, 102,000 have died and 404,000 have recovered from the virus, according to Johns Hopkins University.

China claims to have 82,052 confirmed, with 3,339 deaths, but these figures have been disputed.

Britain’s coronavirus death toll surged past 10,000 today, as a further 710 people lost their lives, bringing the total number of UK fatalities to 10,585.

China were much quicker than European nations and the US to lockdown the epicentre of Wuhan, but Beijing has been criticised for stiffing early reports of the outbreak, delaying an effective worldwide response. 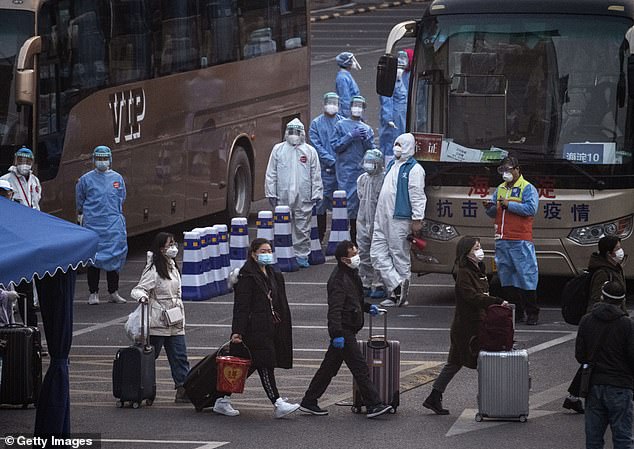 Chinese workers and health officials wearing protective suits as they watch travellers from Hubei province, including Wuhan, as they gathered to take buses to a 14-day quarantine after arriving by train in Beijing 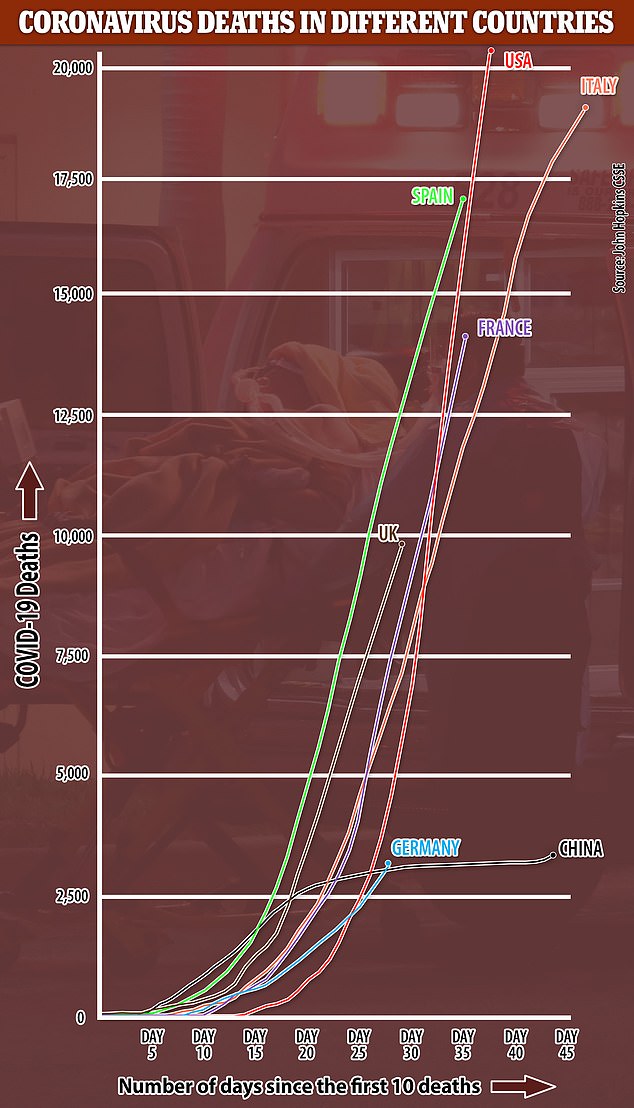 There have also been allegations the Communist regime have tried to cover up the true death toll in the country.

As China is around six to eight weeks ahead of Britain, if the country’s figures are correct the latest financial data acts as a stark warning for the Bank of England and the Chancellor, Rishi Sunak.

The unemployment rate in Britain is on track to rise above 8 per cent, experts have warned.

It came as the US Federal Reserve revealed a £1.8trillion bailout plan for America’s homes and businesses during the pandemic.

On Wall Street on Thursday, the Dow Jones Industrial Average was up 427 points or 1.82 per cent at 23,861, before the markets closed for Good Friday.

The US has already seen 16 million new unemployment applications as huge queues were seen at drive-thru foodbanks in California.

It emerged yesterday that China’s auto sales sank 48.4 per cent in March from a year ago as the economy reeled from the coronavirus, according to an industry group, adding to strains for the struggling industry in its biggest global market. 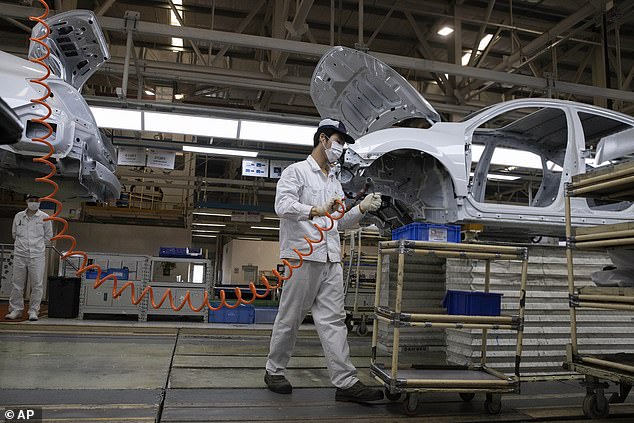 Workers assembling cars at the Dongfeng Honda Automobile Co., Ltd factory in Wuhan. China’s auto sales sank 48.4 per cent in March from a year ago as the economy reeled from the coronavirus 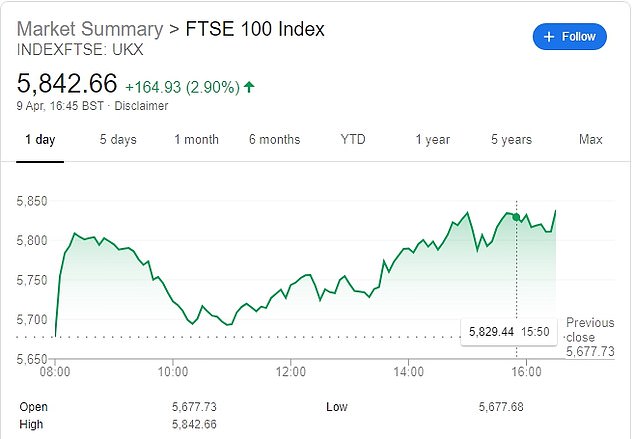 Tao Wang, head of economic research at UBS, predicts a 10 per cent contraction in China’s econmoy, which would indicate a devastating impact on employment.

UBS estimates 50million to 60million people in the services sector may be without work, with another 20m jobless workers in the industrial and construction sectors.

But Wang told the Financial Times that ‘as economic activities normalise and with the help of policies supporting [small and medium enterprises], we expect these numbers to decline quickly and substantially in the coming quarters’.

Shanghai stocks slid on Friday with bleak factory gate data that pointed to a prolonged recovery, but ended the week with their biggest gains.

The ruling Communist Party started reopening factories, restaurants and stores in March after declaring victory over the outbreak.

But consumers who are uneasy about potential job losses or a resurgence of the virus are reluctant to make big purchases. 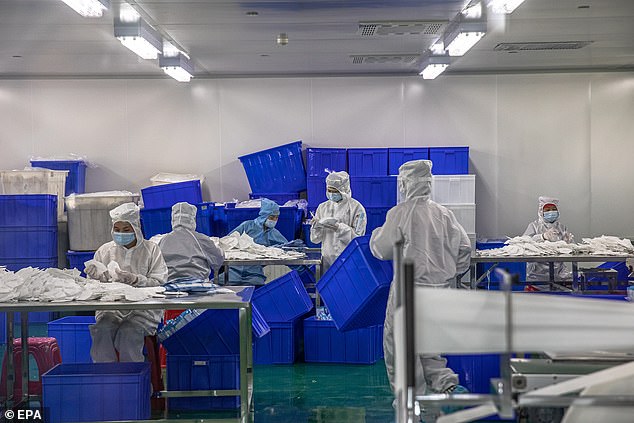 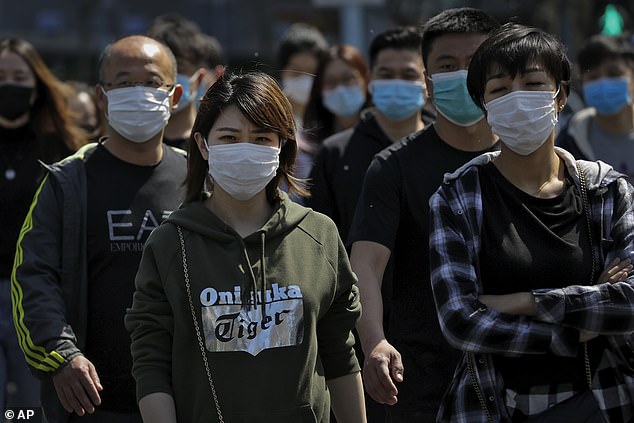 The downturn is squeezing global and Chinese brands that are investing billions of dollars to develop electric vehicles under pressure to meet government sales targets.

The economic slowdown means China will not achieve its goal of doubling growth in the decade from 2010 to 2020, according to experts.

George Magnus, associate at Oxford University’s China Centre, said China’s economic contraction could even reach 15 per cent and not start to recover until the start of next year.

He told the Sunday Times: ‘The threat to supply chains that everyone has become acutely aware of as a consequence of the crisis means companies are wary of sole-source suppliers. The drive to shorten supply chains or move to countries in north Asia will continue.’

Economists believe the rapid fiscal measures taken by Beijing could help the economy rebound and that the lifting of strict restrictions in Wuhan could give GDP a bounce in the second quarter of this year.