China has turned on the star of new Marvel movie ‘Shang-Chi and the Legend of the Ten Rings’ after a four-year-old interview resurfaced online, in which he described the nation of his birth as a third world country where people starve.

Canadian actor Simu Liu, who was born in China’s Heilongjiang province, is heard in the interview explaining why his parents left China when he was just five years old.

Footage of the interview, originally published by The Canadian Broadcasting Corporation (CBC), has since been removed by the broadcaster.

China as turned on Simu Liu the star of new Marvel movie ‘Shang-Chi and the Legend of the Ten Rings’ (pictured in the movie) after a four-year-old interview resurfaced online in which he is seen to have criticised his country of birth, giving reasons why his parents left China 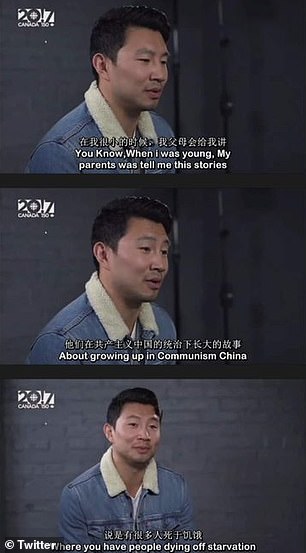 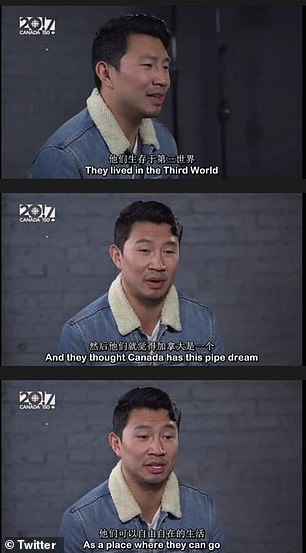 Pictured: Grabs from Simu Liu’s interview with Chinese broadcaster CBC, which which he explained why his parents left China when he was just five years old

Despite this, some were able to take screenshots of the interview before it was removed, posting them to social media.

‘When I was young, my parents would tell me these stories about growing up in Communist China,’ he is reported to have said, explaining the reason behind his parents move to Canada when he was just five years old.

‘They lived in the third world where you have people dying of starvation. And they felt that Canada is a place where they can live freely and give their child a better future.’

Liu’s comments circulated on Chinese social media platform Weibo, and the backlash against the actor from Chinese nationalists has been swift.

‘If that’s the case, why does he still want to act as a Chinese?’ one person wrote, according to RepublicWorld. ‘Has he brought that many years later, he would have to come to China to grovel?’ another questioned.

‘Is this the superiority of ‘high-class’ Chinese?’ one comment read, a sarcastic term that is applied to Chinese people who have left the country to either study or live abroad. It holds a similar meaning to ‘Whitewashed,’ according to CNN.

Other users threatened to boycott or report the Marvel movie if it is released in China. It is yet to be approved for release by the communist party.

Liu is the latest celebrity to have their Chinese ancestry criticised over comments that are viewed to be critical of the mainland amid increasing pressure on what the Chinese Communist Party (CCP) calls ‘overseas Chinese’. 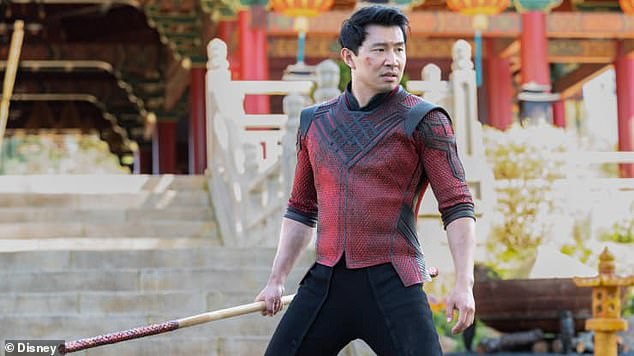 Pictured: Simu Liu stars as Shang-Chi in Marvel’s ‘Shang-Chi and the Legend of the Ten Rings.’

The term has been widely used by officials within the CCP and state-run media in recent years to refer to foreign citizens of Chinese descent. The term often comes regardless of how many generations of their family have lived overseas.

Since President Xi Jinping came to power, he has repeatedly said that overseas Chinese belong to the nation, in an attempt to remove the line between ethnicity and nationality.

Another actor who faced backlash for comments perceived to be anti-Chinese was US-based filmmaker Chloe Zhao, who won an Oscar earlier this year for her film ‘Nomadland’.

Her victory was censored and ignored on Chinese media because in 2013, she described China as a place ‘where there are lies everywhere’ in an interview.

Despite speaking proudly of her Chinese heritage in her acceptance speech, she was still attacked online by Chinese nationalists, demonstrating the increasing intolerance of criticism of China – especially by public figures.

So far – despite efforts to placate Beijing’s censors by erasing a controversial Fu Manchu character from the script – China has snubbed Marvel’s new movie.

Shang-Chi and the Legend of the Ten Rings features an Asian-led cast, Mandarin dialogue and was lauded by American critics for its ‘sensitive’ handling of Chinese culture and hailed as a ‘breakthrough’ for Marvel.

But the Communist Party’s censors are yet to approve it because of its links to the ‘racist archetype’ villain and are set to ban the movie following its $90 million take over Labor Day weekend in the US.

The Disney-owned studio produced the film as part of ongoing efforts to break the Chinese market, but has once again fallen short. 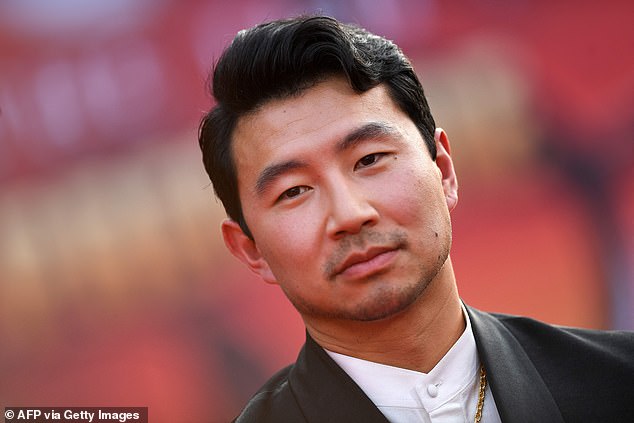 Simu Liu’s (pictured August 16) comments circulated on Chinese social media platform Weibo, and the backlash against the actor from Chinese nationalists has been swift

Shang-Chi has already drawn the ire of Chinese critics due to its links to Fu Manchu, the supervillain created by English pulp fiction novelist Sax Rohmer, who described him as the embodiment of ‘all the cruel cunning of an entire Eastern race.’

The mustachioed criminal mastermind was portrayed by white Britons such as Boris Karloff, Peter Sellers and Christopher Lee and is considered the archetype of Western anti-Chinese sentiment.

Fu Manchu does not appear in the new movie but in the Marvel universe he is Shang-Chi’s father, owing to the US comic franchise buying the rights to Rohmer’s character in the 1970s.

But many Chinese believe that the new film cannot disassociate itself with this legacy.

Kevin Feige, president of Marvel Pictures, last month told a Chinese critic that Fu Manchu ‘is very offensive’ and added that Wenwu ‘cannot even be called [a] villain.’

Screenwriter Dave Callaham told Inverse, ‘We knew we wanted to change that stuff,’ adding that the filmmakers had a ‘physical list’ of things ‘we were looking to destroy.’

However, the choice of Liu Semu for the lead role also angered some Chinese critics who viewed him as ‘not Chinese enough.’ Others claimed that the 32-year-old had the stereotypical looks of what Westerners associated with Chinese people.

In the last decade, US studios have increasingly focused their attention on the Chinese market – worth $9 billion last year.

Disney, which owns Marvel, came under fire last year with its live action version of Mulan which was partially shot in Xinjiang province, notorious for its Uyghur detention camps.

The studio even altered the screenplay to placate Chinese censors. But despite a plot based on Chinese folklore and a largely Chinese cast, it was rejected by Chinese critics and flopped at the box office.