China bears responsibility for climate change even when historic emissions are taken into account, new figures have shown, despite Beijing’s long-standing attempt to blame the West’s industrial revolution for the crisis.

The country emerges as the world’s second-largest polluter even when carbon emissions dating back to 1850 are included in the total – the date by which most Western nations had industrialised and become reliant on fossil fuels for at least part of their economic output.

The data gives proof to the lie, often-repeated by Beijing, that western nations bear ‘historic responsibility’ for the crisis. It was the argument used last week by China’s climate minister as he defended the country’s weak climate commitments – ahead of a likely no-show by Xi Jinping at the COP26 climate conference in Glasgow.

‘Developed countries emitting greenhouse gas without any restraint over the past few hundred years since the industrial revolution contributed to the climate change problem today,’ he said.

Fresh analysis – by think-tank Carbon Brief – shows that China did indeed industrialise decades after the West but has grown so ferociously in recent years that its cumulative carbon output has now outstripped all other nations with the exception of the US which comes out top, with a little under double China’s output.

China is the world’s second-largest polluter even when emissions going back to 1850 are taken into account, new figures have shown, rebutting Beijing’s insistence that the West is ‘historically responsible’ for the climate crisis 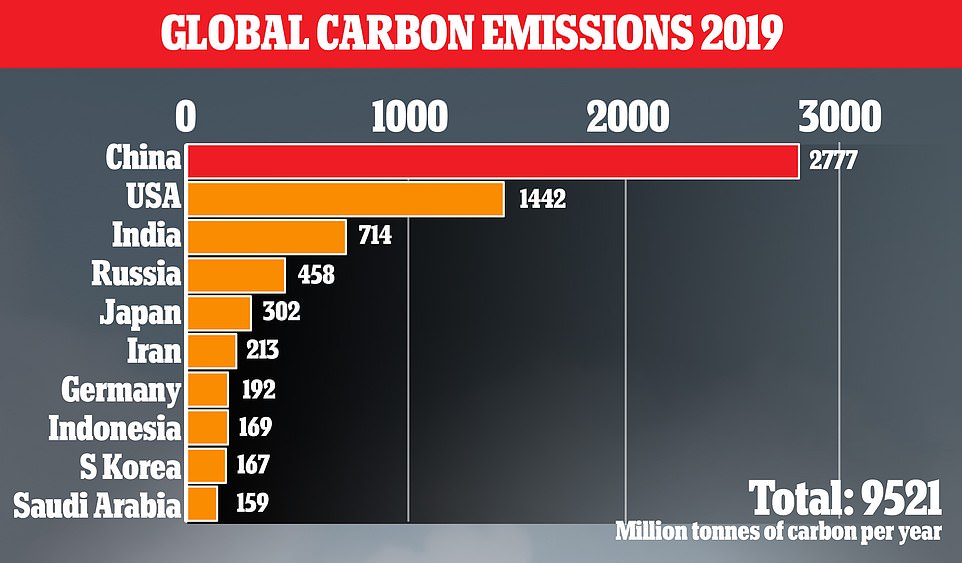 While China industrialised decades later than western nations, its growth in recent years – largely fuelled by coal – has been so ferocious that it has eclipsed almost all other nations. It is not the world’s largest emitter by a wide margin (above)

Its report uses data that has been gathered measuring emissions directly in recent decades, and combines it with historic estimates based on trade figures for fuels such as coal, oil and natural gas which make it possible to calculate the amount of carbon dioxide released when they were burned.

It also relies upon historic estimates including two papers published in 1894 and 1896 which attempted, for the first time, to measure carbon emissions and warned that they could contribute to changes in climate.

The analysis also takes into account CO2 emissions from land usage, such as deforestation and intensive farming, but also the plating of forests and trees which act as ‘carbon sinks’ by removing pollutants from the atmosphere.

Carbon Brief only includes carbon emissions in its analysis, since this gas accumulates in the atmosphere and contributes to long-term warming. Other gases can contribute to short-term warming, but quickly dissipate.

Starting in 1850, China is third-placed in the table largely thanks to deforestation to create farmland and provide fuel for fires at home. America is already well out in first place, thanks to the combined effects of both land clearance by settlers and the early adoption of industrial technology.

China quickly slips down the list, replaced by the likes of Russia, the UK and Germany as they industrialised and began to rely on carbon for factory output and later energy generation. Indonesia and Brazil also rank high on the list, largely thanks to extensive deforestation.

But, beginning in 1960 shortly after Chairman Mao announced the Great Leap Forward with the aim of industrialising China, the country quickly rockets up the list into second place.

The report adds: ‘China’s … rapid, coal-fired economic boom since 2000 is the main cause of its current position.

‘China’s CO2 output has more than tripled since 2000, overtaking the US to become the world’s largest annual emitter, responsible for around a quarter of the current yearly total.’

Remarkably, China remains in second place even when ‘consumption emissions’ – carbon emitted producing goods for other countries – is taken into account, challenging another oft-cited opinion that it is being unfairly punished for churning out products bought by the greedy West.

Only when taking into account carbon emissions per person does China drop out of the top 20 ranking. Perhaps  surprisingly, it is New Zealand that tops the list of carbon-producing countries throughout history when viewed in terms of total population. Canada tops the list for carbon produced per person in the last year. 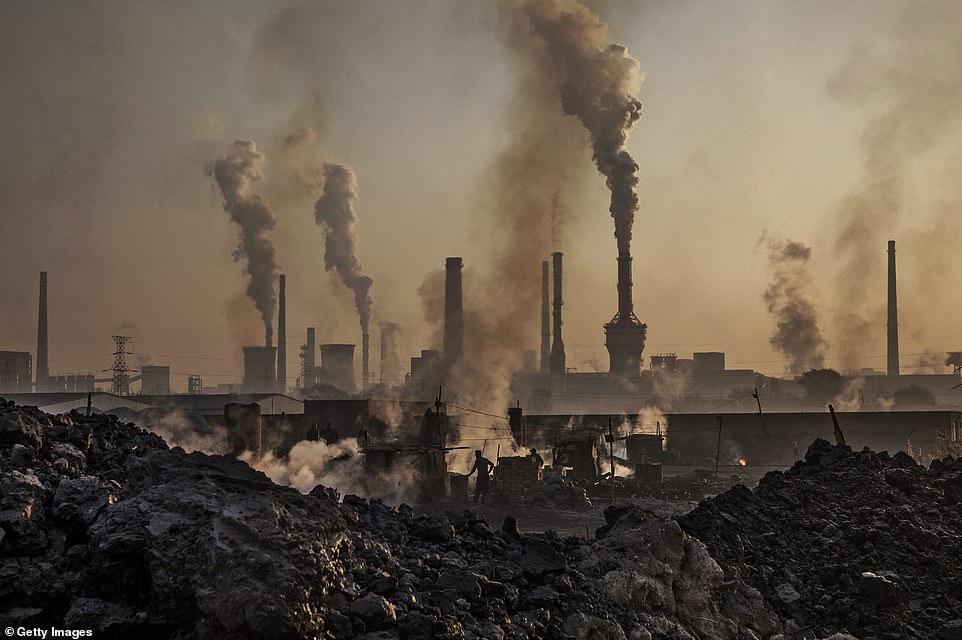 China is the world’s largest producer and user of coal, and plans to build more coal-fired power stations throughout this decade before finally capping their use in 2030 (pictured, a coal plant in Mongolia) 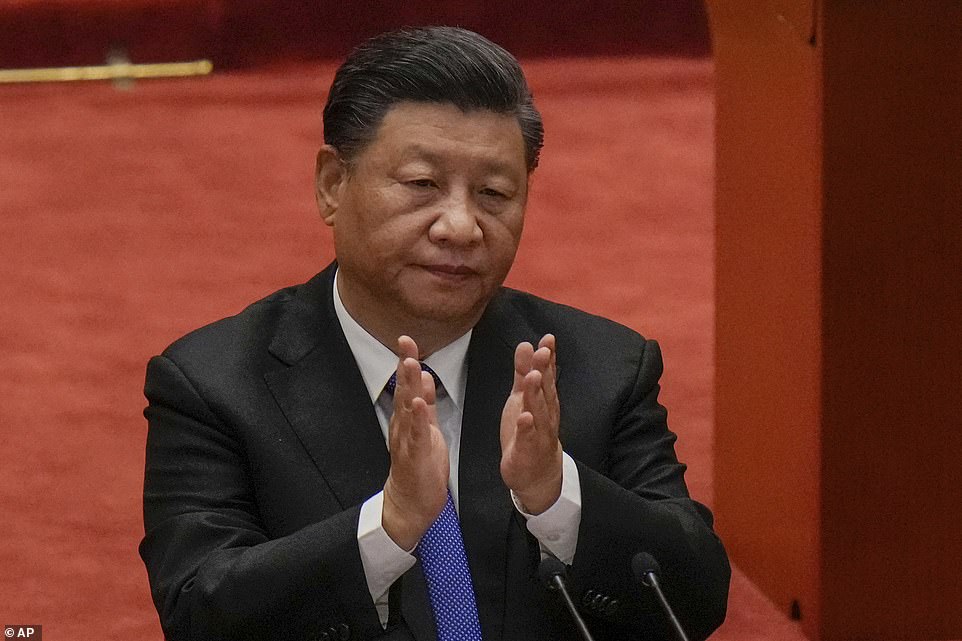 Xi Jinping has resisted calls to go further and faster in cutting his country’s emissions, and is unlikely to attend the COP26 summit in Glasgow next month where more-ambitious targets will be agreed

China is now the world’s biggest producer and user of coal, relying on the fuel – the most-polluting of all energy sources – for more than 60 per cent of its total energy use.

It currently runs 1,082 coal-fired power stations and is rushing to build more as blackouts strike cities and factories that are coming back to life post-Covid.

While most other nations including the US have committed to making immediate and legally-binding cuts to their carbon emissions, China actually intends to grow its carbon output for the rest of the decade.

Signing the Paris Accord back in 2015, Xi Jinping would only commit to capping China’s carbon output by 2030 – without saying what level it will reach – before going carbon neutral by 2060. The vast majority of nations are committed to going carbon neutral a whole decade earlier, in 2050.

China seeking to shirk responsibility for the climate crisis is nothing new. Back in 2007 – two years after the Kyoto Protocol came into force as the first global treaty aimed at reducing carbon emissions – Beijing also sought to blame western nations for causing the damage.

‘It must be pointed out that climate change has been caused by the long-term historic emissions of developed countries and their high per-capita emissions,’ the foreign ministry said at the time. ‘Developed countries bear an unshirkable responsibility.’

But the new analysis shows that was the same year that China leap-frogged Russia to take second place on the list historical emissions and that, in the years since, it has almost doubled the amount of carbon it has pumped into the atmosphere.

UN scientists warn that unless emissions are greatly reduced in the coming decades – requiring the wholesale transformation of the global economy – then humanity will start experiencing devastating consequences of climate change which are already being felt.

In a report issued earlier this year ahead of the COP26 summit, the UN sounded ‘code red for humanity’ – warning of annual extreme heat waves, typhoons and 5ft rises in sea level if nothing is done to reduce emissions.

China, as the world’s largest emitter, will be central to efforts to curb the worst effects of climate change but Beijing has strongly resisted agreeing to any targets that go beyond its current efforts – which analysts say fall well short of what is required to avert ‘catastrophe’. 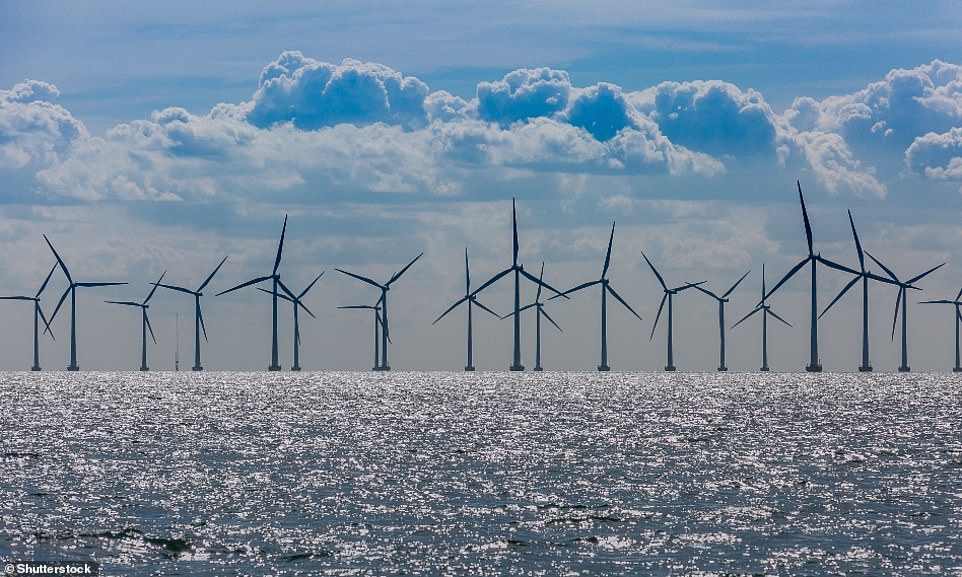 The UK has committed to going further and faster than any other nation to tackle climate change, including huge investments in renewables (pictured, the world’s largest offshore windfarm at Dogger Bank)

‘China has already announced its own climate road map and will stick to its own pace,’ an editorial in the state-run Global Times newspaper said last month.

Xi’s non-attendance at COP26 has led many to fear that the summit will turn out to be a damp squib and yet another missed opportunity by world leaders to take decisive action.

The UN Environment Programme (UNEP) warned today that, even with new plans and pledges from countries for cutting greenhouse gas emissions in the next decade, the world faces global warming of 2.7C by 2100.

The latest climate plans and pledges brought forward by countries to tackle emissions by 2030 only reduce predicted planet-warming pollution by 7.5% by 2030 compared to their previous commitments, it said.

But reductions of 55% are needed to meet the goal to limit global temperature rises to 1.5C – beyond which more severe impacts of climate change will be felt, from extreme weather to rising seas.

Some 49 countries and the EU have pledged long-term targets to cut emissions to net zero, which could bring temperature rises down to 2.2C, but only if they are fully implemented, with action in the next decade, it said.

And the report showed that just a fifth of the recovery investment to help reboot economies after the pandemic had gone to supporting green measures – missing an opportunity to drive action to slash emissions.

The report also highlights opportunities to cut emissions quickly, including by tackling the powerful but short-lived greenhouse gas methane, which could be reduced significantly with technology and changes to diet.

Launching the report before world leaders head to Glasgow for crucial Cop26 climate talks, UNEP’s executive director Inger Andersen warned: ‘The world has to wake up to the imminent peril we face as a species.

‘Climate change is no longer a future problem. It is a now problem,’ she said.