On Sunday, January 8, the first people to arrive expressed relief at not having to undergo the gruelling quarantines that were a fixture of life in zero-Covid China.

In Hong Kong, where the border with mainland China was re-opened after years of closure, more than 400,000 people were set to travel north in the coming eight weeks.

Beijing last month began a dramatic dismantling of a hardline zero-Covid strategy that had enforced mandatory quarantines and punishing lockdowns.

On Sunday, January 8, the first people to arrive expressed relief at not having to undergo the gruelling quarantines 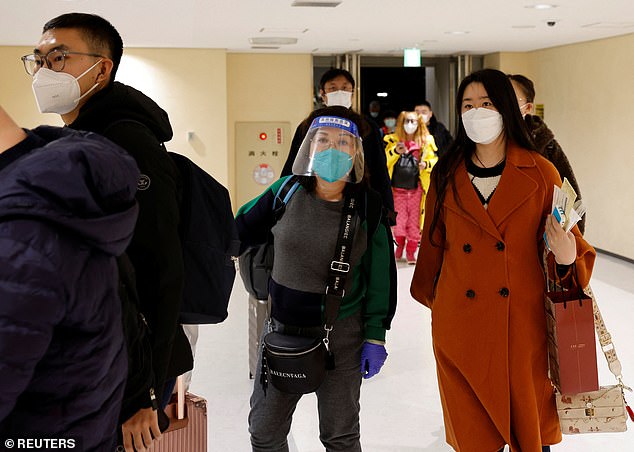 400,000 people were set to travel to the boarder in Hong Kong in the next eight weeks

The policy had a huge impact on the world’s second-biggest economy and generated resentment throughout society that led to nationwide protests just before it was eased.

At Shanghai’s Pudong International Airport, a woman surnamed Pang told AFP Sunday she was thrilled with the ease of travel.

‘It’s a necessary step I think. Covid has become normalised now and after this hurdle everything will be smooth,’ she said. 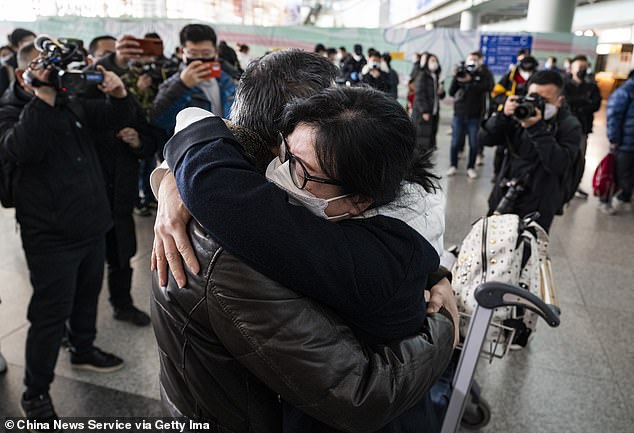 Families were finally reunited as China lifted quarantine requirements for inbound travellers, ending almost three years of self-imposed isolation even as the country battles a surge in Covid cases 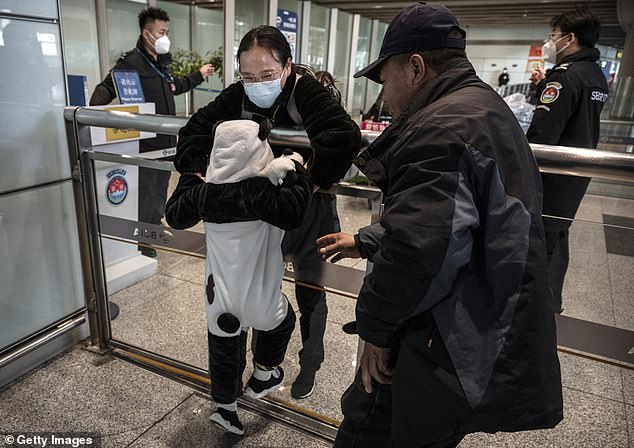 But the expected surge in visitors has led more than a dozen countries to impose mandatory Covid tests on travellers from the world’s most populous nation as it battles its worst-ever outbreak.

China has called travel curbs imposed by other countries ‘unacceptable’, despite it continuing to largely block foreign tourists and international students from travelling to the country.

China’s Covid outbreak is forecast to worsen as it enters the Lunar New Year holiday this month, during which millions are expected to travel from hard-hit megacities to the countryside to visit vulnerable older relatives. 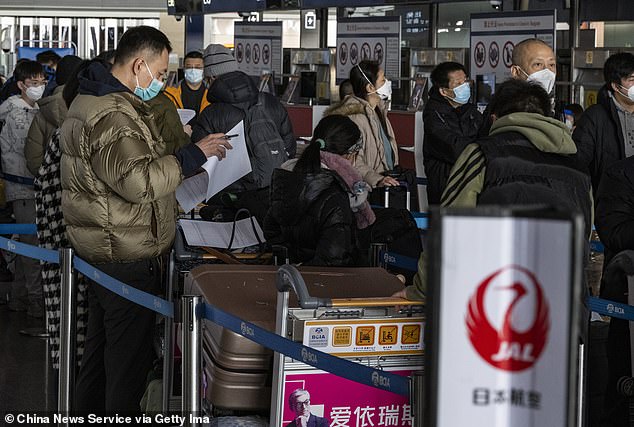 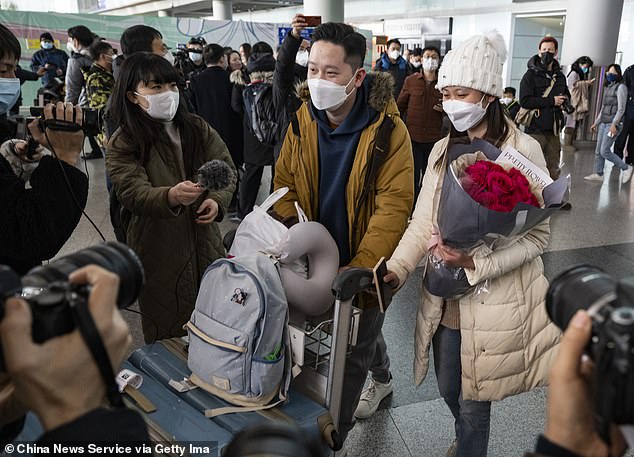 And Beijing has moved to curb criticism of its chaotic path out of zero-Covid, with its Twitter-like Weibo service saying it had recently banned 1,120 accounts for ‘offences against experts and scholars’.

At Beijing airport Sunday, barriers that once kept international and domestic arrivals apart were gone, as were the ‘big whites’ – staff in hazmat suits long a fixture of life in zero-Covid China.

One woman, there to greet a friend arriving from Hong Kong, said the first thing they’d do was grab a meal.

‘They are studying over there, and we can meet each other directly in Beijing… It’s been a year,’ she added.

At Shanghai airport, one man surnamed Yang who was arriving from the United States said he had not been aware that the rules had changed. 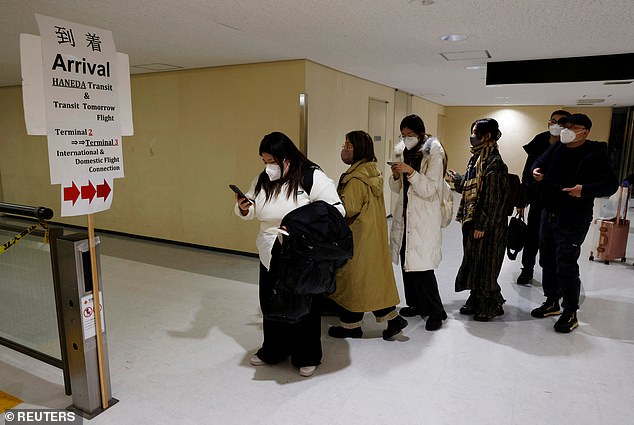 Passengers on a plane from China’s capital Beijing arrive and head to the coronavirus disease (COVID-19) test area at Narita international airport in Narita, east of Tokyo 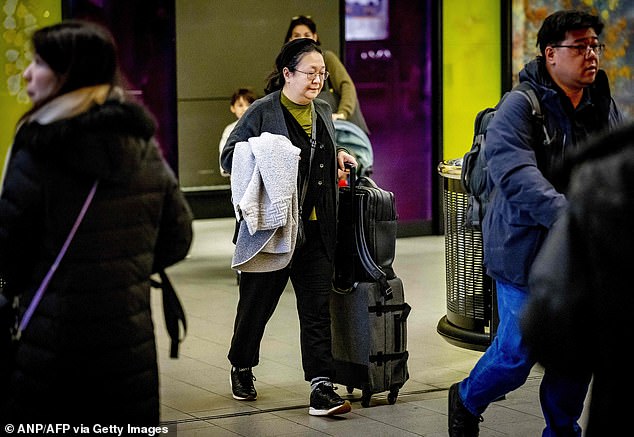 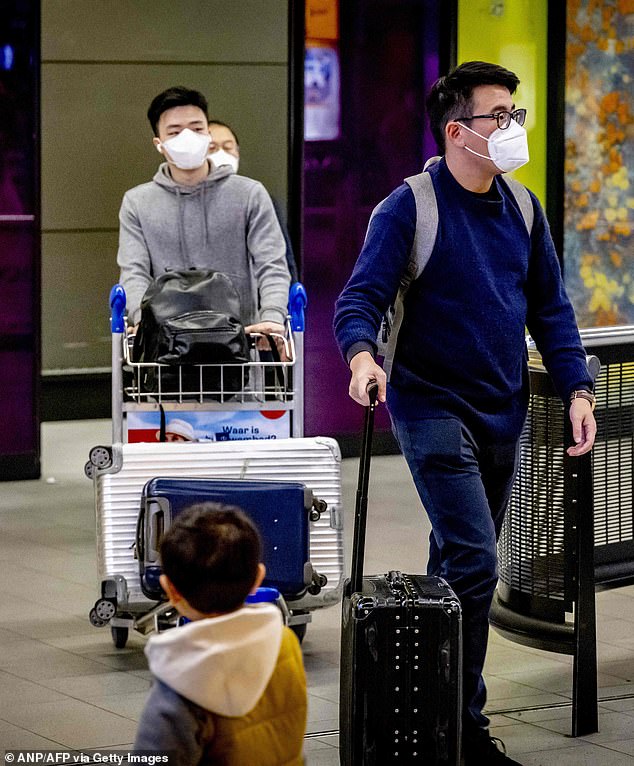 ‘I’d consider myself extremely lucky if I only need to do quarantine for two days, turned out I don’t have to do quarantine at all, and no paperwork, we just walked out like that, exactly like in the past,’ he added.

‘I’m quite happy not needing to be in quarantine,’ another woman being picked up by her boyfriend who declined to give her name told AFP.

‘Who wants to be in quarantine? Nobody.’

In China’s southern semi-autonomous city of Hong Kong, visitors streamed across the border as travel restrictions with the Chinese mainland were eased.

Hong Kong’s recession-hit economy is desperate to reconnect with its biggest source of growth, and families are looking forward to reunions over the Lunar New Year.

At the Lok Ma Chau checkpoint near Shenzhen, a postgraduate student from mainland China surnamed Zeng told AFP they were happy to cross with no more restrictions.

‘I am happy as long as I don’t have to be quarantined – it was so unbearable,’ Zeng told AFP