A delicate china doll that served as the lucky mascot for a British tank crew and miraculously survived the war in one piece has been discovered 76 years later.

The small doll, called Little Audrey, had been given to Captain Lionel ‘Bill’ Bellamy by his then girlfriend Audrey before he set out for Normandy in 1944 with the Royal Armoured Corps.

She was adopted by the troop and was attached to Capt Bellamy’s Cromwell tank’s searchlight to the right of the turret and became a good luck charm – and they needed her.

Capt Bellamy survived being shot through the beret and was nearly blown up when his tank drove through a minefield.

In one attack in Holland, the 5ins tall doll was knocked from her position by a tree branch.

The doll was given to Capt Bill Bellamy by his sweetheart and accompanied him throughout the war, attached to his tank. Pictured: Bellamy, left and right, receiving his Military Cross

Astonishingly, so loved was Audrey that the troop of three tanks stopped and another tank leader leapt into the open and at great risk, to retrieve her.

Capt Bellamy later wrote: ‘As I was about to give the signal to move, I saw Sergeant Bill Pritchard leap out of his tank, he rushed back to the hedgerow, picked up Audrey, clambered on the back of my tank, handed her to me and shouted ‘I’m not going without her!’

‘I knew that she had become a very much-loved mascot, but until that moment I hadn’t realised he full extent of her role!’

Capt Bellamy, who was awarded the Military Cross for rescuing wounded colleagues while under heavy fire, split up with Audrey after the war but kept the porcelain doll.

He died in 2009 and Little Audrey has been donated by his family to the Tank Museum in Bovington, Dorset, for a new exhibition.

David Willey, curator of the Tank Museum, said: ‘Sometimes it doesn’t take an object as big as a tank to tell a powerful story. 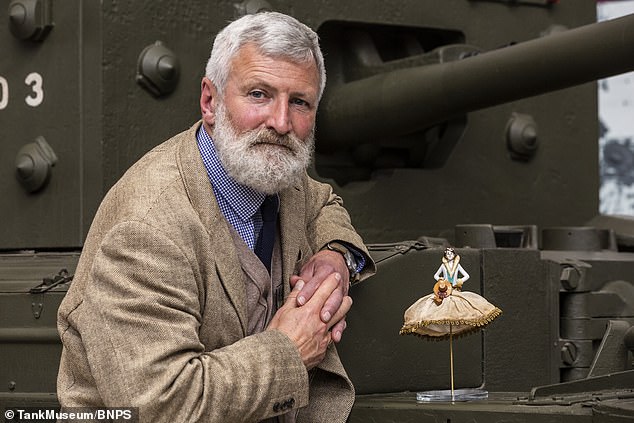 Pictured: David Willey, curator of The Tank Museum, with Little Audrey who is now on display 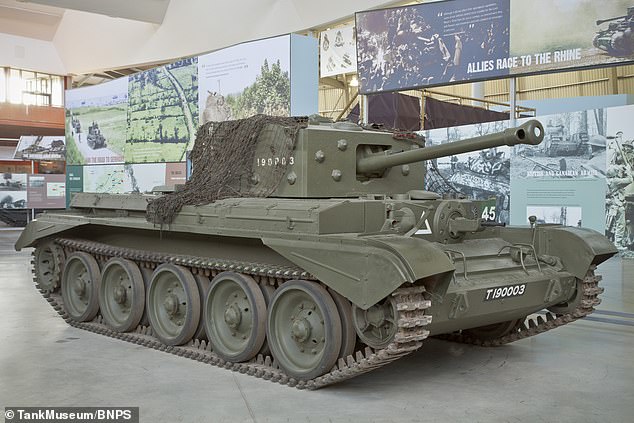 Pictured: A Cromwell tank which is the same type upon which Little Audrey went into battle

‘Here we have a small delicate object, it’s amazing that she survived at all because she is porcelain and could have been so easily broken.

‘Bill’s family have been astonishingly generous to loan her to us for our exhibition, World War Two: War Stories.

‘To see the doll alongside the huge tanks is perhaps a little unexpected but the aim of our new displays is to bring veteran stories to the public, humanising, personalising the stories. Audrey does just that.

‘Bill visited the museum on a number of occasions, depositing with us an account of his incredible war service. He later published his war memoir Troop Leader to wide acclaim.

‘After Normandy Bill fought the dangerous but retreating Germans through France, Belgium and Holland.

‘He even got to Berlin where he managed to wander around the Reichstag and take some souvenirs. 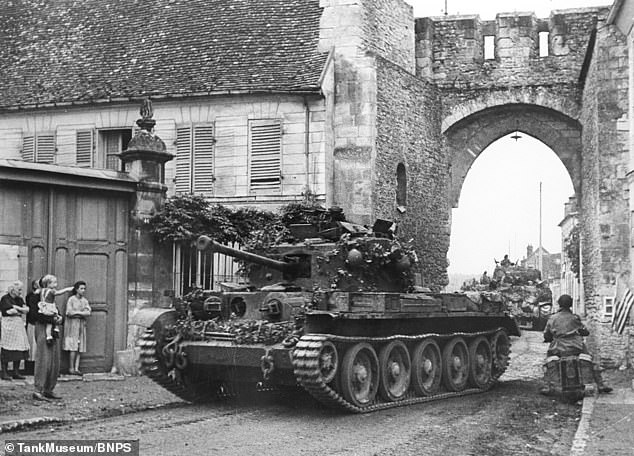 ‘During the fighting, with Audrey at his side, Bill was wounded in the head, but after a few stitches remained at his post.

‘He also managed to drag a number of survivors from two armoured cars that he saw being hit by enemy fire, right under the noses of the Germans.

‘He thought the Germans could see him and knowing he was trying to rescue wounded men let him carry on unmolested.

‘Then in November 1944 he came under small arms, mortar and artillery fire, so he engaged the enemy posts and took out three of them.

‘He became aware that there was something different with his tank – it was not made of proper armour plate and was only mild steel training tank. 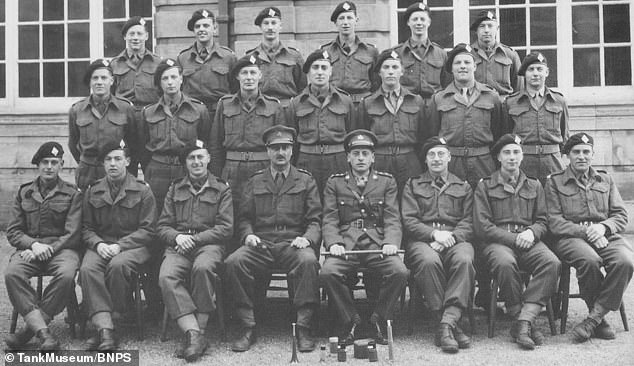 ‘He was offered a new one but being lighter his tank was fast – and he had lucky Audrey with him so he stuck with it.

‘Later he drove over a minefield, miraculously missing all the lethal ordnance and on another occasion he almost burned to death when petrol ignited and set his bedding on fire but he managed to get himself and his crew to safety.

‘He then discovered his beret had two bullet holes in it. Proof perhaps that Little Audrey was keeping him from meeting his maker. Bill had a strong faith and he said it was a great comfort to him.

‘Bellamy was awarded the Military Cross by Field Marshal Sir Bernard Montgomery himself in a ceremony in March 1945 and he stayed in the army until 1955 and then had a successful business career.

‘He split up with his girlfriend Audrey but kept his good luck Audrey doll. He went on to marry and have four children, with son Andrew following him into the Queen’s Royal Irish Hussars.

‘His memoir is one of the best books to come from someone who served in tanks.

‘Audrey was present through all his remarkable military service and that Bill kept her until he passed away in 2009 shows how much he loved her.’

The exhibition is now open and runs until further notice.