EXPRESS INFORMER > News & Politics > China bombards US warships with drones: One LANDED on deck of destroyer near Hong Kong

US warships have been bombarded by suspected Chinese espionage via drones over the past five years, according to newly released Navy records.

Following a Freedom of Information Act request from The War Zone, the unsealed documents show US fleets were plagued by unidentified drones that appeared to be documenting America’s forces in the Pacific.

Among the incidents included a drone landing on a US ship in Hong Kong, the arrest of a Chinese national flying a drone in Pearl Harbor, and another set of drones snooping around a nuclear stockpile.

In all, there were about 35 reports of incidents stretching back to 2017, with the Navy withholding information on 116 more reports because they contained classified information.

The WarZone, which has long documented such incidents, warned that the reports ‘underscore that drone encounters have become commonplace and that some of them may in fact be efforts by adversaries or potential adversaries to spy on, surveil, or otherwise harass American forces at home and abroad.’

The US Navy documented 35 reports of drones suspected of surveilling America’s Pacific fleet between 2017 and 2021. One incident involved a swarm of drones surrounding the USS Paul Hamilton (above) in 2019, which was stationed in San Diego 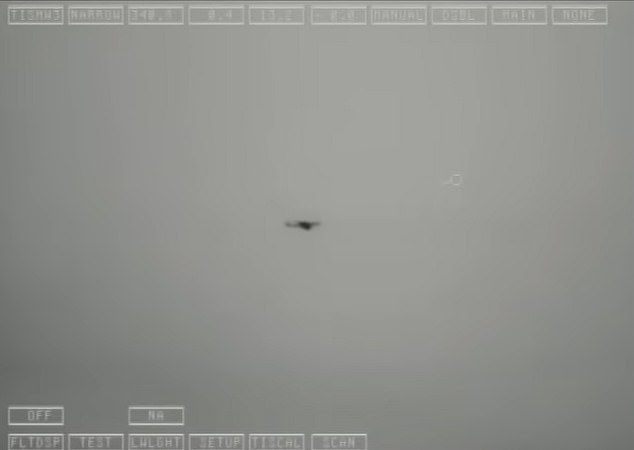 The drones appeared overnight at the end of July, with reports saying they were flashing lights, suspected camera flashes, at the destroyer-class ship

Among the most concerning incidents detailed in the Navy’s records involved the USS Paul Hamilton, which was stationed in San Diego in July 2019.

According to the report, a series of drones swarmed the ship’s crew on July 30 and 31, with the aircrafts flashing ‘a searchlight or photographic device’ at the vessel.

Camera’s from the ship were able to capture one of the drones flying overhead during the first night.

Just two weeks before the incident, the destroyer-class ship was harrassed by another set of drones, which The War Zone previously linked to the Hong Kong-based Bass Strait’s vessel.

There were four more incidents linked to Hong Kong, notably one where the destroyer-class USS Chafee caught two drones flying over the ship in October 2017.

According to the Navy’s reports, one of the drones landed on the US ship, where the crew managed to secure it and hand it over to the Naval Criminal Investigative Team.

The report does not disclose what came out from the investigation other than the fact that the incident was documented as alleged ‘surveillance’ of the USS Chafee.

Not much was disclosed about the other three Hong Kong incidents, only that the USS Makin Island assault ship reported multiple drones near it over three days in April 2017.

The USS Ronald Reagan, a Nimitiz class aircraft carrier, also reported multiple drones around it while it was based in Hong Kong in October 2017. 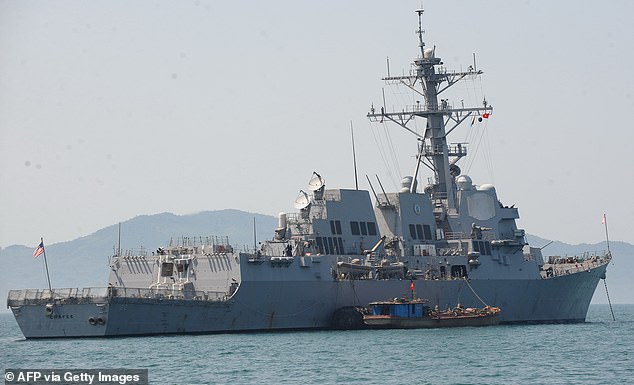 The USS Chafee, which was stationed in Hong Kong in 2017, had two drones flying around it, with one captured by the crew members after it landed successfully on the ship 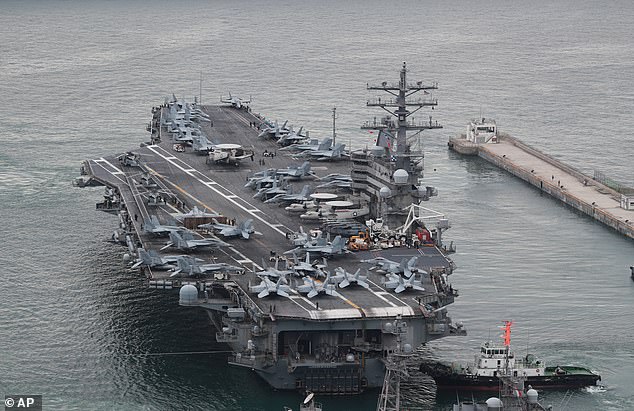 The USS Ronald Reagan (pictured), an aircraft carrier, also saw multiple drones fly around it while it was stationed in Hong Kong in October 2017

Back in the US, more incidents of alleged Beijing espionage were reported when a Chinese national was arrested in Pearl Harbor.

Officials took the man into custody for flying a small drone in Rainbow Bay Marina on the Hawaiian island of Oahu.

‘The drone operator… stated that he had just finished visit[ing] the [USS] Arizona Memorial and decided to test out his new drone… [by taking] a view of the sailboats in Rainbow Bay Marina,’ the report reads.

Although the report notes that officials concluded there were no signs of espionage in the incident, it also revealed that multiple Chinese tourists were arrested between 2018 and 2020 for trespassing on Navy installations and taking pictures of them.

There were at least three other reports of such incidents in Pearl Harbor that opened FBI investigations. 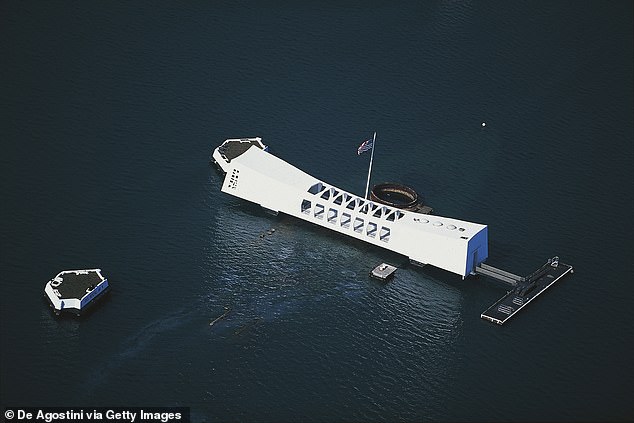 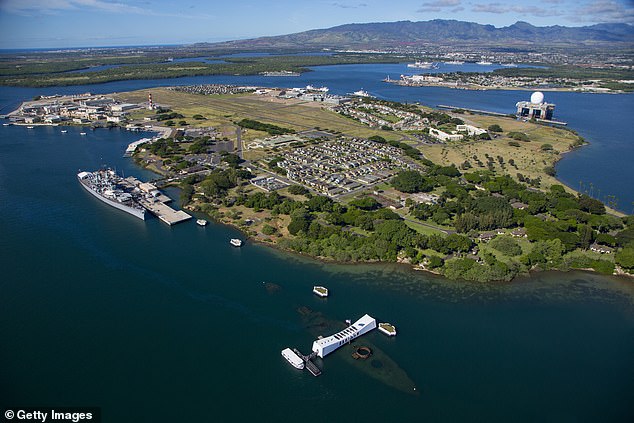 Although the case was deemed not an act of espionage, officials noted several arrests of Chinese tourists around Navy installations, including three FBI investigations in Pearl Harbor 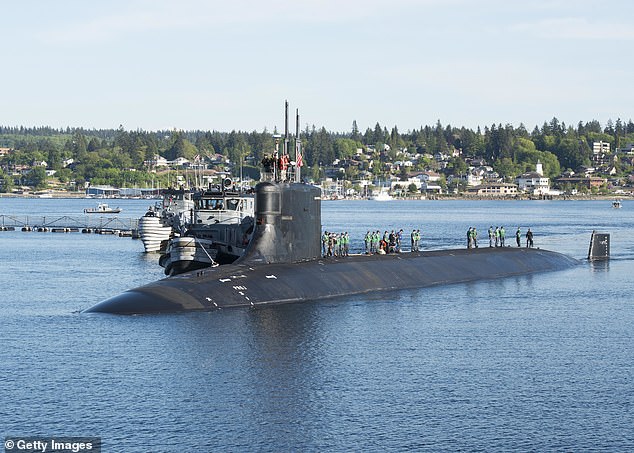 There were several drone surveillance incidents reported at the US Naval Base Kitsap (above) and the neighboring Bangor base, in Washington, where some of the nation’s most powerful nuclear warheads are stored

Another incident outlined in the reports includes drone sightings by the Navy base in Bangor, Washington, which houses some of the nation’s most powerful nuclear warheads.

According to the documents, service members were conducting explosive-handling operations when a drone was spotted flying around the base in January 2017.

A gunner aboard the Bangor spotted the drone with night vision goggles and documented the incident as a surveillance attempt.

There were several other surveillance incidents reported in the nearby Naval Base Kitsap, with at least one prompting an investigation from the FBI.

Representatives for the US Navy and Department of Defense did not immediately respond to DailyMail.com’s request for comment. 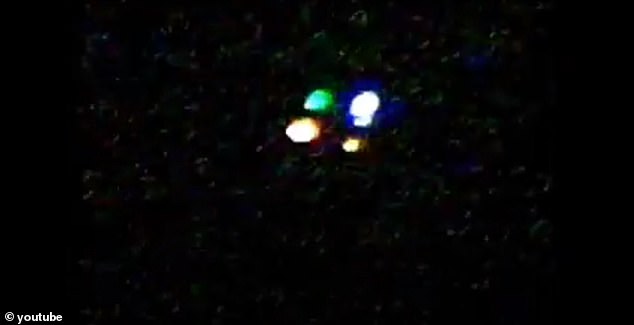 The Navy released a video last month about another incident. The drones, captured on April 24th, 2019, were outfitted with four multicolored lights as they flew in circles around the USS Zumwalt off the Coast of Southern California 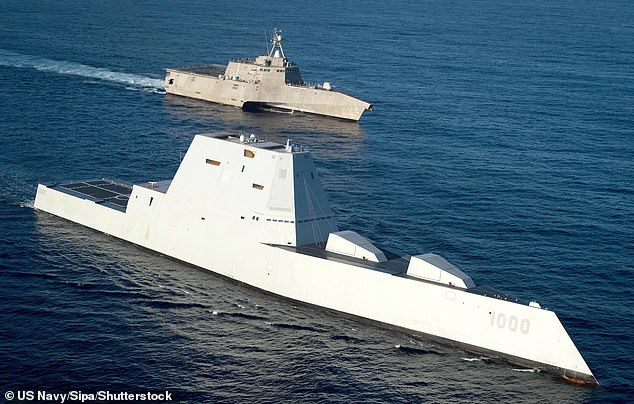 The newest set of reports come just a month after the Navy released a new video showing the moment a sailor filmed six mysterious drones swarming around its most advanced warship in April 2019.

In this incident, drones were captured floating around the USS Zumlwalt, though six other vessels were involved, and all incidents happened between March and July of 2019.

It happened 19 miles off the coast of California, in international waters, while the Zumwalt was stationed at Camp Pendleton.

In the video, a sailor can be heard narrating the strange event and says the aircraft are operating at an altitude of 300 to 1000 feet and made multiple flyovers and circle patterns around the ship.

While the video obtained via an investigation by The Drive is unclear, it shows a drone with multicolored lights buzzing above the ship flying in ‘consistent patterns,’ and the sailor also says they appear to be unarmed.

At one point, one of the drones passed over the deck of the ship, and no contact with the vessel itself was made.

Drone swarm events have become more common in recent years, and in some incidents less capable drones are even used as ‘canaries’ to distract security systems or probe defenses.