Chimpanzees ‘show off’ by sharing objects that they’ve just found – and are therefore even more like humans than previously thought, a new study shows.

British researchers have captured footage of an wild adult chimpanzee in Uganda, called Fiona, encouraging her mother to look at a leaf that she’d found.

Just like a young human child who’s picked up a random object off the ground, Fiona shoves the leaf under her mother’s nose for a few seconds before withdrawing it.

The priceless footage shows chimps share objects just to get attention – a social behaviour described as ‘sharing for sharing’s sake’, thought to be unique to humans.

Look at this leaf I found! Researchers captured video evidence of an adult female chimpanzee, Fiona (right), showing a leaf to her mother, Sutherland, in Kibale Forest, Uganda. Humans and chimpanzees are both great apes (Hominidae) and chimps are our closest animal cousins 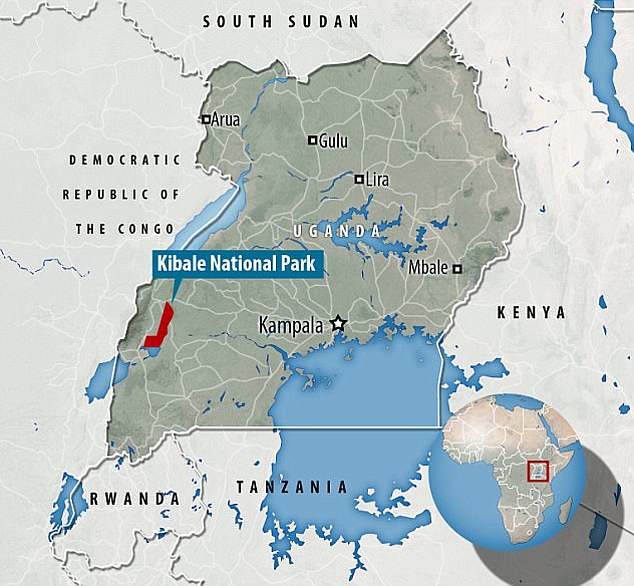 Humans and chimpanzees are both great apes (Hominidae) and chimps are our closest animal cousins, but this behaviour has never before been recorded.

The interaction has been described in a new study published today in Proceedings of the National Academy of Sciences.

There are four genera of great apes:

– Gorilla (the eastern and western gorilla)

– Pan (the chimpanzee and the bonobo)

– Homo (of which only modern humans remain)

‘It has been suggested that “sharing for sharing’s sake” is a uniquely human trait, but our observation of these wild chimpanzees challenges this,’ said study author Dr Claudia Wilke at the University of York’s Department of Psychology.

‘We observed an adult chimpanzee showing her mother a leaf she had been grooming, not because she wanted her to do anything with the leaf, but most likely because she simply wanted her to also look at the leaf.’

The interaction took place in Kibale National Park, close to Uganda’s border with the Democratic Republic of Congo.

Adult female Fiona was sitting next to her mother Sutherland, whom she had been grooming.

Fiona then plucked a leaf from a small sapling and started grooming the leaf – a previously documented behaviour in chimps that includes manipulating the leaf with the fingers and mouth and peering closely at the leaf.

‘Sutherland’s attention was focused elsewhere while Fiona did this, and after grooming the leaf for several seconds, Fiona held it out towards Sutherland,’ the researchers say. 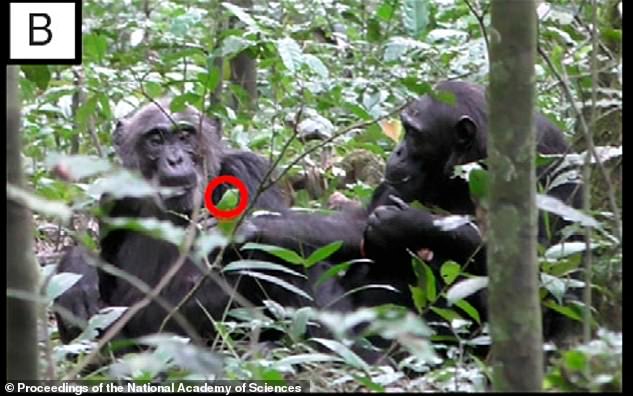 Chimps ‘care more about who their friends are with age’

Chimps get more selective about their friends as they get older, 2020 research found.

In a study spanning two decades, US experts observed social interactions among 21 wild male chimps, ranging in age from 15 to 58 years.

Like humans, older chimps prefer to be around established friends and spend less time seeking new ones, they found.

‘She repositioned her arm when the initial holdout did not elicit a response.

‘Once Sutherland attended to the leaf by fully orienting her eyes and head toward it, Fiona retraced it and continued leaf grooming.’

In all, the team examined 84 similar leaf-grooming events in order to ‘explore Fiona’s likely motivation for her gesture’.

This let them rule out alternative explanations for the behaviour, including food sharing and initiating grooming or playing.

For example, if food sharing was the Fiona’s motivation, she would have been expected to relinquish possession of the leaf – but in this case she did not.

Also, the species of leaf that Fiona showed Sutherland is not included in the chimp diet in this particular chimp community.

In their paper, the researchers make a comparison with young human infants who like to ‘share attention with others about external entities’ – sharing for sharing’s sake.

Human infants as young as 10 to 13 months old start to make gestures such as showing, giving or pointing to an elder.

This helps establish social interaction and direct a caregiver’s attention to an object, action or entity.

Future research will aim to further document this behaviour in chimp communities, the experts conclude. 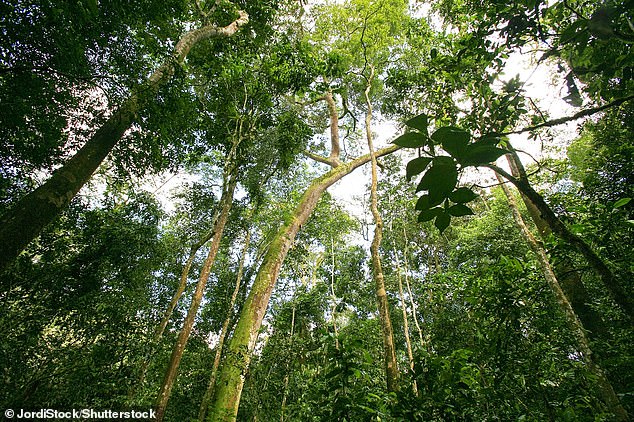 Kibale National Park (pictured) is in the western part of Uganda about 348km (5 hrs drive) from Kampala, the country’s capital city 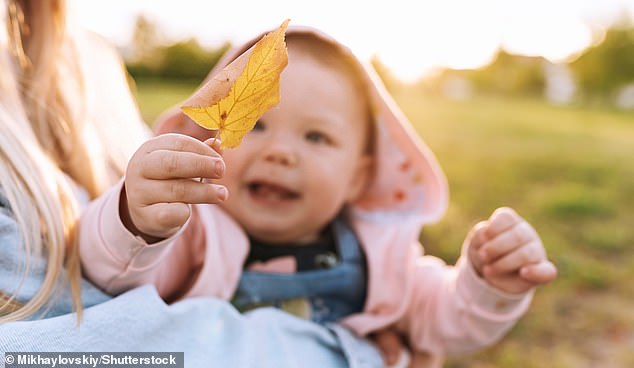 Human infants as young as 10 to 13 months old start to make gestures such as showing, giving or pointing to an elder (file photo)

There are four living classifications of great apes or ‘Hominidae’ – Orangutan, Gorilla, Pan (consisting of chimpanzee and the bonobo) and Homo, of which only modern humans remain.

Chimpanzees, along with bonobos, both share 98.7 per cent of their DNA with humans – making the two species our closest living relatives.

Like us, chimps are highly social animals, care for their offspring for years and can live to be over 50 years old.

Female chimpanzees spend most of their time with their young or with other females, although they live in communities that are dominated by adult males.

The chimpanzee, as known as chimps, are a great ape species native to the savannah of tropical Africa.

There are four confirmed subspecies and a potential fifth subspecies awaiting confirmation.

It is closely related to the bonobo and part of the genus Pan, a distant relative to humans.

They are covered in coarse black hair with a bare face, fingers, toes, palms  of hands, and soles of the feet.

They reach between three feet 11 in and four feet 11 inches in height.

Gestation period is eight months and mothers will wean the infant for up to three years, keeping a close relationship for years after weaning.

Almost all chimpanzee populations have been recorded using tools, modifying sticks, rocks, grass and leaves for hunting and foraging.