An NHS nurse whose hair fell out through the stress of working on the coronavirus frontline has said she ‘feels like a new woman’ after taking a £35 supplement which left her hairline restored in just eight weeks.

Roberta Woodford, 24, from south London, said she struggled for years with hair loss, which would become worse at times of stress.

The children’s nurse, who works at a central London NHS hospital, said her locks became ‘painfully thin’  across the top of her scalp as fears of a coronavirus pandmeic in the UK started to grow in late January.

But after her hairdresser recommended she started taking £35 supplement Hair Gain, Roberta found her hairline thickened ‘almost immediately’ and within two months her locks, and her confidence, were transformed.

Roberta Woodford, 24, from south London, revealed how her hair was ‘painfully thin’ across the top of her scalp 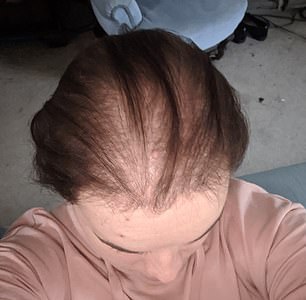 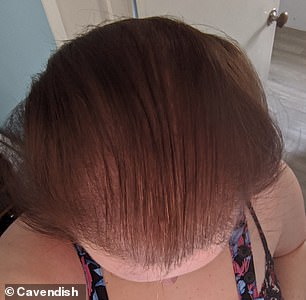 Roberta’s hair problems started during puberty at 14 when her body underwent hormonal changes which lead to thinning noticeably.

She believes it was linked to her suffering from polycystic ovary syndrome, a condition which causes the ovaries to become enlarged, releasing high levels of androgen (a ‘male’ hormone) into the body.

Roberta said her mild hair thinning did not cause her major problems until she graduated from her nursing degree at the University of Southampton four years ago.

She said her stress levels rocketed when she started working as a children’s nurse at an NHS hospital. 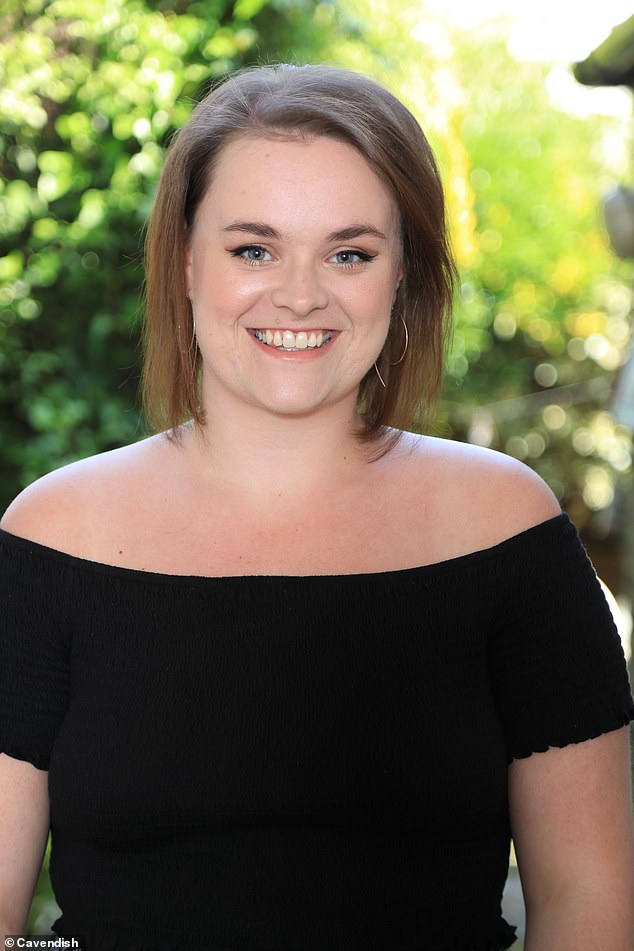 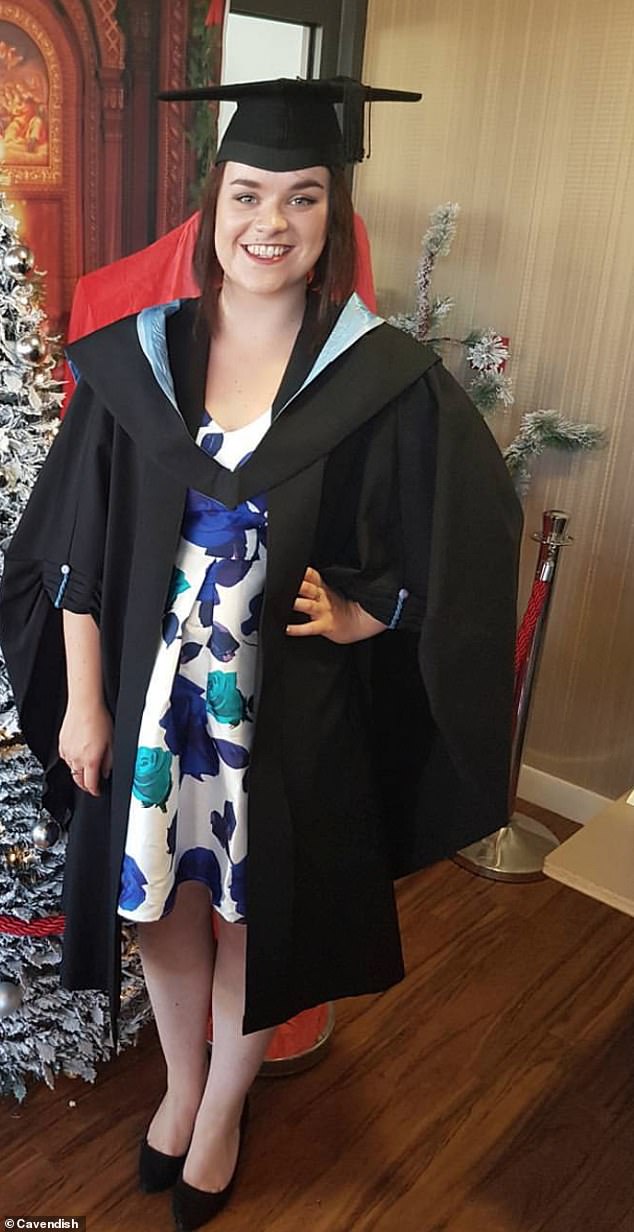 She said: ‘I was working in a hospital without the mentor you have at university to fall back on. I found adjusting very stressful and my hair loss accelerated.

‘I would have bald patches at the side of my scalp and would constantly be looking at new ways to disguise my hair loss. 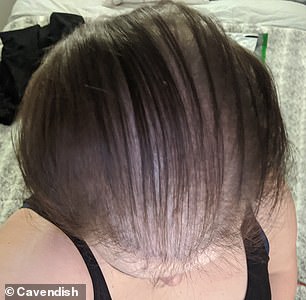 Roberta’s hairline starting to thicken while taking the supplements

Roberta added: ‘I would develop dry patches of skin on my scalp where the hair had fallen out, making it even more difficult for it to grow back.’

And she struggled with her hair loss for the next four years with constant support from her hairdresser.

She said: ‘My hair was styled in a way which would cover up my baldness and I would comb it back to cover up the thinnest areas.’

She had also tried various expensive products which promised to restore hair but none had worked in the long-term.

Roberta said her hair was at its thinnest at the start of the year, just as the coronavirus was about to hit the UK, and frontline workers such as Roberta faced risking their lives to cope with casualties.

She said: ‘It was painfully thin right across my scalp in January and it affected my body confidence.

What is PCOS? Causes, symptoms and treatment explained…

PCOS is a hormonal disorder causing enlarged ovaries with small cysts on the outer edges.

Women with PCOS may have infrequent or prolonged menstrual periods or excess male hormone (androgen) levels.

Fertility may also be affected.

While the exact cause of PCOS isn’t known, insulin resistance caused by a highly refined and processed diet is believed to be one of the biggest triggers.

PCOS can be managed through diet, the contraceptive pill and other oral medications.

‘It was thinner than I had ever been before. It really does hit you hard and you are always wondering if other people are talking about your hair loss.’

But after her hairdresser had attended a hair loss conference in London a few weeks earlier and came back with a month’s supply of Hair Gain.

Roberta started taking it and over the next two months her hair grew back and is now thicker than it has been for years. 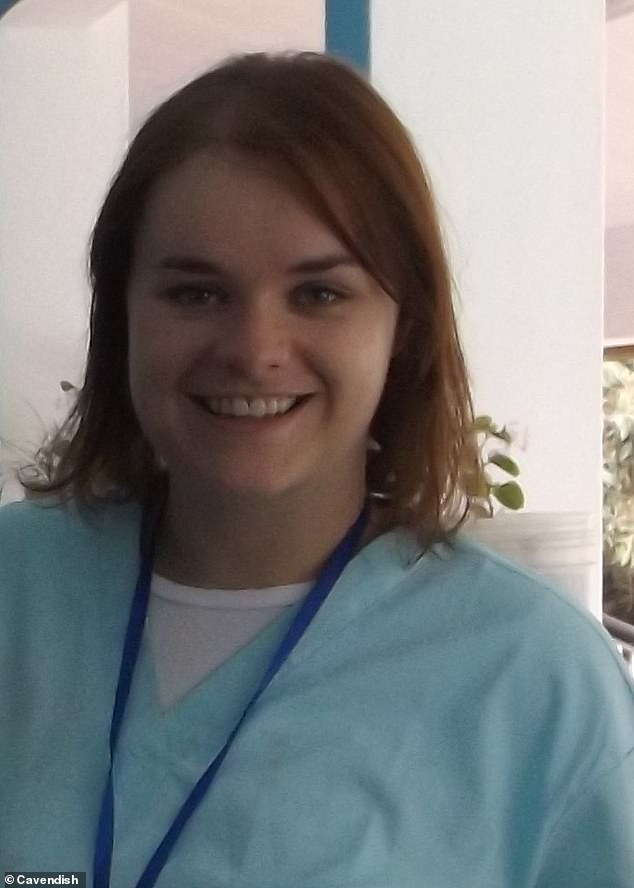 Roberta said her stress levels rocketed when she started working as a children’s nurse at an NHS hospital (pictured, at work)

She said: ‘It started to make a difference almost immediately and I was so impressed that I started pictures every few weeks from the same angle so that I could properly appreciate how it was growing back.

‘Every week it was a little thicker and, as I looked at the pictures, I could feel my body confidence surging.

‘Within eight weeks, my hair was pretty much fully grown back. It was thicker than it had been for years and I felt so much happier and good about myself.’ 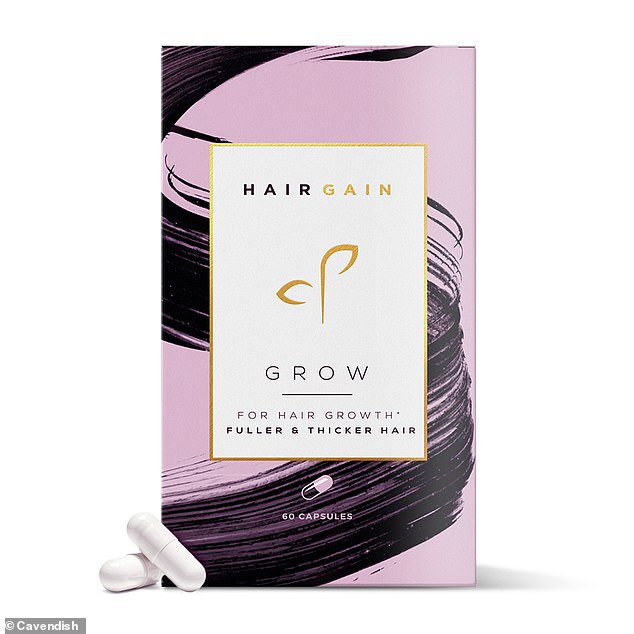 Roberta started taking the supplements, which promise fuller and thicker hair, upon the recommendation of her hairdresser

She continued: ‘It was so nice to go to work and not feel self-conscious about my hair.

‘I have always suffered badly from acne and this cleared up as well. I used to get quite angry spots on my chin but Hair Gain contains zinc which is good for the skin and my skin is clearer than it has ever been.’

Losing your hair as a woman, especially if you’re young or at a vulnerable time in your life, can badly affect your confidence.

Jackie Tomlinson, Alopecia UK spokesperson and a dermatology specialist nurse at Addenbrooke’s Hospital in Cambridge, says society considers hair to be an important part of how you look:

‘For women, there’s a social stigma attached to going bald,’ she says. ‘Hair loss can affect your sensuality and how you perceive yourself. There are usually emotional trials and tribulations when it happens.

‘Some women question whether their partner will still love them. I’ve known others become socially reclusive and give up enjoyable activities like swimming and going to the gym, because they can’t bear using the communal changing rooms for fear of their hair loss being discovered.’

Hair loss, known medically as alopecia, is common. It’s estimated, for instance, that around 70% of women over the age of 70 experience female-pattern baldness – the most common type of hair loss, which is thought to be inherited.

There are lots of different types of hair loss. It can take the form of “thinning” or involve a total loss of hair. It can be gradual or sudden; it can affect the old and the young.

Hair loss can be genetic, or as a result of extreme stress, a medical condition or treatment.

Now, Roberta is busier than ever working in the children’s ward and intends to continue taking the supplement to ensure her hair loss doesn’t happen again.

She said: ‘I just feel very grateful to still be working. Millions of people have lost their jobs through this crisis and I feel lucky to still be at work and be able to make a difference.’

Roberta revealed how her long-term boyfriend has been a constant support throughout her hair journey.

She said: ‘He said he loved the way I looked even when my hair was thin and has been brilliant at boosting my confidence.

‘But he said he could really notice the difference and that my hair is looking so much better.’

Around four in ten women are expected to suffer hair loss at some point in their lives including the menopause, post-partum or stress.

Lucy Palmer created Hair Gain after suffering hair loss following the birth of her daughter with a number of trichologists have recommend it to their clients.

She said: ‘It was amazing to see such a huge difference in Roberta’s hair.

‘Not only is she working on the NHS frontline but she is also battling the added stress of chronic hair loss which can really sap a woman’s confidence.

‘I am so pleased that Hair Gain has completely restored her hair and really boosted her self-esteem.’

Roberta revealed how she is looking forward to a well-deserved holiday when the coronavirus crisis is finally over.

She said: ‘I will be busy for a long-time yet but it will be nice to get away when the time is right.

‘It will be great to be able to relax with my hair looking at its best.’