It’s a widespread problem at schools in cities around the world, and now a new study has warned that noise pollution can affect children’s memory.

They found that children at schools with higher traffic noise had slower cognitive development.

‘Our study supports the hypothesis that childhood is a vulnerable period during which external stimuli such as noise can affect the rapid process of cognitive development that takes place before adolescence,’ said Jordi Sunyer, an author of the study.

It’s a widespread problem at schools in cities around the world, and now a new study has warned that noise pollution can affect children’s memory (stock image)

How much does noise affect cognitive development?

The study found that a 5 decibel increase in noise levels resulted in:

In the study, the researchers studied 2,680 children aged 7-10, who attended 38 schools across Barcelona.

To assess the possible impact of traffic noise on cognitive development, the researchers assessed the children’s attention and working memory.

Noise measurements were also collected over the same period from the schools’ playgrounds and classrooms.

An analysis of the results revealed that the progression of working memory and attention was slower in students attending schools with higher levels of traffic noise.

It also resulted in attention capacity development that was 4.8 per cent slower than average. 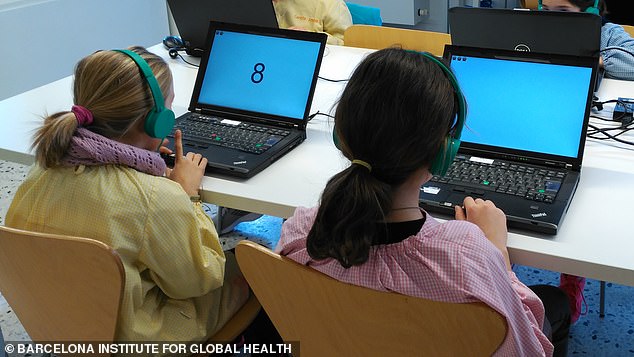 In the study, the researchers studied 2,680 children aged 7-10, who attended 38 schools across Barcelona

In terms of how outdoor and indoor noise compared, the researchers found that children in schools with noisy playgrounds performed worse on all tests.

However, noisy classrooms only appeared to affect the children’s attention, and not their working memory.

‘This finding suggests that noise peaks inside the classroom may be more disruptive to neurodevelopment than average decibel level,’ said Dr Maria Foraster, lead author of the study.

‘This is important because it supports the hypothesis that noise characteristics may be more influential than average noise levels, despite the fact that current policies are based solely on average decibels.’

The researchers also looked at the children’s average noise levels at home, based on a road traffic noise map of Barcelona.

Surprisingly, they found no link between residential noise and cognitive development.

‘This could be because noise exposure at school is more detrimental as it affects vulnerable windows of concentration and learning processes,’ Dr Forester said.

‘On the other hand, although noise measurements were taken at the schools, noise levels at the children’s homes were estimated using a noise map that may be less accurate and, in any case, only reflected outdoor noise. This, too, may have influenced the results.’

While the reason for the findings remains unclear, the researchers hope their findings will spark further studies on road traffic and its effect on children’s cognitive development.

Children living in areas with high levels of air pollution, noise and traffic are more likely to be OBESE, study suggests

Children living in areas of the country with higher levels of air pollution, noise and traffic are more likely to be obese, researchers claim.

A study of more than 2,000 children in Sabadell, near Barcelona, Spain, explored these key environmental factors and their impact on children’s weight.

Children aged nine to 12 were examined by experts from the Barcelona Institute for Global Health and the University Institute for Primary Care Research Jordi Gol.

Forty percent of the children living in the city were overweight or obese at the time of the study, with urban factors including pollution, noise and traffic to blame.

The authors say that by understanding the mechanism of the relationship between an urban environment and childhood obesity can lead to the development of community-led health provisions to promote healthier behaviours in a city.

They couldn’t say what caused the link, but suggest it may be air pollution inducing inflammation or oxidative stress, hormone disruption and visceral adiposity.