Children up to four years old were just as likely to die from flu or a stroke as COVID-19 during the final months of 2021 — the start of the Omicron wave, a DailyMail.com analysis of official statistics has revealed.

The Centers for Disease Control and Prevention (CDC) published its estimates for the fatality rate for leading causes of death over October to December last year on Wednesday.

Data showed that despite the surge in infections at the time, fatalities caused by Covid remained minimal among American children less than 15 years old — with the disease not becoming the leading cause of death.

Among children aged one to four years cancer was the leading cause of death followed by heart disease, with Covid in third place alongside flu and stroke. Among five to 14 year olds, they were four times more likely to have died from cancer than Covid during the period.

Top experts — who asked not to be named — today said the figures suggested there was ‘no emergency’ to vaccinate children, especially considering more than three-quarters likely already have immunity from a previous infection with the pandemic virus.

But Dr Paul Offit, who was on the Food and Drug Administration’s board that approved jabs for the youngest children, said it suggested children should still get vaccinated because they faced a risk from Covid.

The above chart shows the leading causes of death for under-4s and those aged five to 14 years over the last three months of 2021. It reveals that at no point Covid was the leading cause of death, despite the Omicron wave 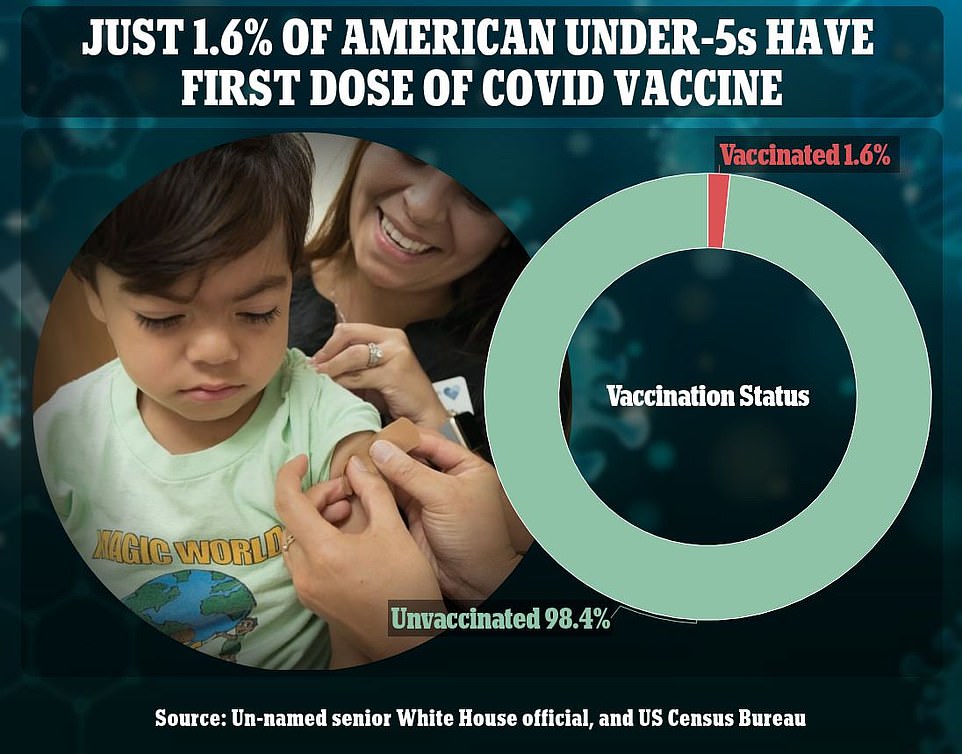 Figures leaked in the first three weeks after vaccines were approved for the youngest children showed just 300,000 had got their first doses. When they were approved, officials said ‘millions’ were waiting to get the jabs

The CDC’s report is published every three months and based on reports from all 50 states on fatalities by age groups and cause of death.

Barely one in 70 children under five years old have got their first dose of the Covid vaccine despite it being approved last month.

Health chiefs rubber-stamped jabs for the age group claiming ‘millions’ of parents were ‘eager’ to get their youngsters inoculated.

But three weeks into the drive a senior White House source told CNN that only 300,000 children have been brought forward for the jab, less than 1.6 percent of the 19million-odd who are eligible.

The source insisted uptake was low because it was still early in the drive, and that many parents were holding off getting their children the jab until they had a check-up for another appointment.

But many experts say it is not necessary for children to get the Covid vaccine because they face such a vanishingly small risk of dying from the virus.

Surveys also suggest less than one in five parents want to get their children inoculated against the virus.

Breaking the data down into age groups showed that among one to four year olds cancer was the leading cause of death (1.7), followed by heart disease (0.7). The rate was 0.4 for Covid, flu and strokes.

Covid cases began to tick up in late November, reaching a record high of 320,000 a week by the end of December.

According to data from the American Academy of Pediatrics, Covid cases among America’s youth reached their highest point during 2021 during the final week of the year — just as the Omicron strain began to take hold in the country.

But the bulk of America’s Omicron wave struck early in 2022, with cases surging above 1.1 million a week in late January.

It was a similar picture among children aged five to 14 years, where the death rate from cancer at 1.9 was above that from Covid, at 0.4.

Even among people aged more than 85 years old — who are most at risk from Covid — the virus was the fourth leading cause of death at 1,199 fatalities per 100,000 people.

After viewing the data, a top expert told DailyMail.com it appeared there was ‘no emergency’ that would require children to get vaccinated against Covid.

They also pointed to CDC estimates that at least 75 percent of children have already had the virus, to say that the vast majority already have some form of protection.

But after viewing the data, Offit said: ‘To me, this suggests that children can die from Covid, even if the rate is lower than that for cancer or heart disease.

The FDA approved Covid vaccines for the youngest children in mid-June, making the United States the only country in the world to offer the jabs to those less than a year old.

Children are offered either two doses of the Moderna vaccine up to eight weeks apart, or three doses of the Pfizer jab with a three week gap between the first and second and an eight week gap to the third.

Both jabs use a dose less than a quarter of the size of those given to adults, and studies show they are safe and effective in the age group.

But a number of experts have raised concerns over vaccinating children, saying they face a vanishingly small risk of becoming seriously ill or dying after catching the virus. Statistics show just 0.05 percent of America’s more than a million deaths from the virus are among under-5s.

There are also concerns over myocarditis, a form of heart inflammation that can be a side-effect of the vaccine. Most cases are mild, although a few medics have raised concerns over long-term side effects.

And some experts fear the jabs may delay children getting other important jabs — such as the measles, mumps and rubella vaccine — because it can’t be administered alongside others.

Figures leaked by a senior White House source showed barely one in 70 children less than five years old — or 1.3 percent — had got their first dose of the Covid vaccine despite it being approved last month.

Health chiefs rubber-stamped the jab saying ‘millions’ of parents were ‘eager’ to get the shots, but just 300,000 youngsters had come forward within the first few weeks. 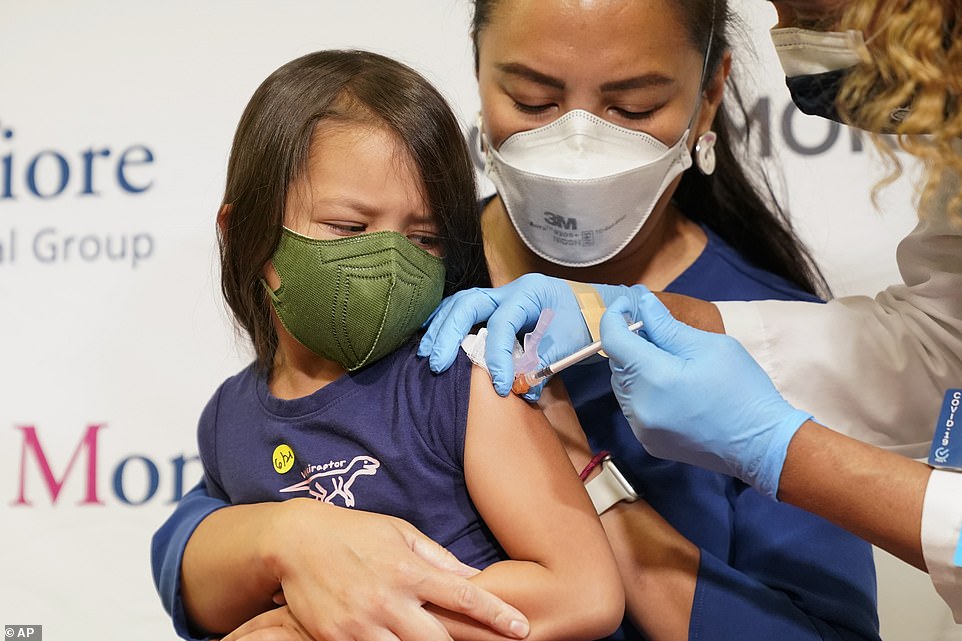 Mother Maria Assisi holds her daughter Mia, 4, as she receives her first dose of the Moderna Covid vaccine at the Montefiore Medical Group center in the Bronx, New York City

Breaking down the statistics from the CDC report revealed Wyoming had the highest death rate from Covid (337.4) over the last three months of 2021.

A total of five million doses of Covid vaccine have been distributed across all states except Florida for the vaccine roll out.

When they were approved by the CDC, its director Dr Rochelle Walensky claimed: ‘We know millions of parents and caregivers are eager to get their young children vaccinated, and with today’s decision, they can.’

She added: ‘I encourage parents and caregivers with questions to talk to their doctor, nurse or local pharmacist to learn more about the benefits of vaccinations and the importance of protecting their children by getting them vaccinated.’

Uptake across the U.S. has slowed as the roll out expanded into younger age groups.

CDC data showed among people over the age of 75 years 88 percent are fully vaccinated, alongside 93 percent of people aged 65 to 74.

For comparison, among five to 11 year olds just 30 percent are double-jabbed while among 12 to 17-year-olds the level is 60 percent.

A survey carried out in May by health pollster Kaiser Family Foundation found just 18 percent of parents would ‘definitely’ get their child vaccinated against Covid.

But two in five said they would refuse the jab for their children or only get it for them if it was a requirement.

It comes after surveillance by the CDC found more than three quarters of under-18s already have Covid antibodies from a previous infection.

The first and second doses are given within three weeks of each other.

Maximum protection is achieved within 42 days.

Why does Moderna only have two doses?

The side effects are similar, with fever in toddlers and irritability in babies being the most common.

The second is given three weeks after the first, the third is two months later.

Maximum protection is achieved within 90 days.

Why does Pfizer only have three doses?

Pfizer contains a lower dosage  which is why it takes longer to reach maximum protection but it may work in your child’s system for longer.

One study showed that Pfizer had less impactful side effects in babies than Moderna.