Two boys aged about seven have been filmed fighting each other as a gang of teenage boys egged them on in a scene one witness said was ‘sickening to watch’.

The confronting scene unfolded about 11.30pm on Monday on Stokes Terrace in the South Australian town of Port Augusta, 309km north-west of the state capital Adelaide.

The video shows the two boys, stripped to the waist, squaring up to each other trading blows.

A group of older boys, some of whom armed with metal poles, are seen coercing them to hit each other while others can be heard laughing and shouting.

Locals watched on in horror, as a woman filming from across the road is heard saying: ‘someone needs to get here now or these kids are going to kill each other’.

Immediately after speaking, one child was knocked to the ground and and the other starts kicking him.

The disturbing fight went on for more than five minutes, witnesses said.

Witness Kirara Hill told 9News Adelaide it was frightening to hear ‘the way they were encouraging it and doing that ‘ooh, ooh, ohh’ noise of encouragement as well.’

Another neighbour, Garnett Brady, said ‘It was actually sickening to watch because I’ve got a couple of little kids myself, roughly about the same age.

‘And I just thought that could have been our kids out there doing that.’

Some among the gang of youths encouraging the boys to fight also filmed the violent brawl, laughing and shouting as they did so

The two boys (pictured right), stripped to the waist and squared up to each other

South Australian Premier Peter Malinauskas was ‘alarmed’ when he learned about what had happened in Port Augusta.

‘Actively encouraging inappropriate behaviour, particularly acts of violence amongst young people, that is not OK,’ he said on Tuesday.

But locals said youth violence in the town is all too common.

‘This is what we deal with in Port Augusta and on Stokes Terrace, nightly,’ Ms Hill said. 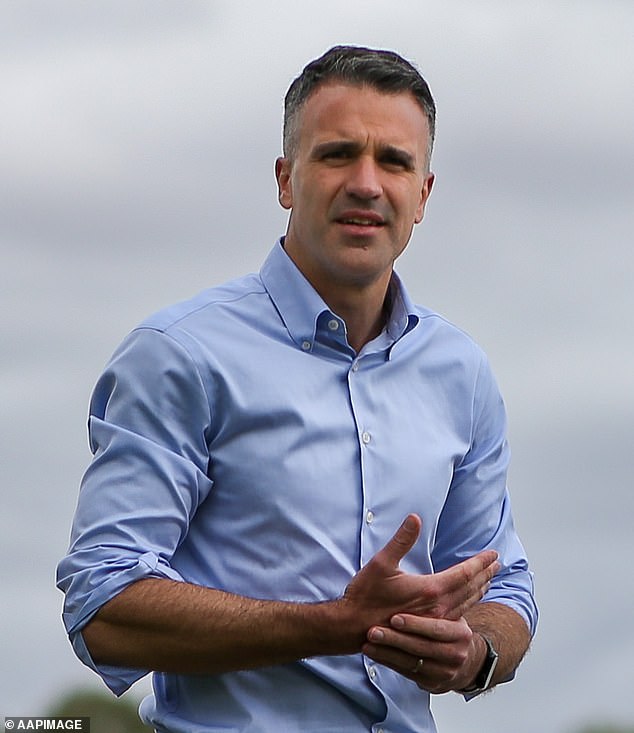 The terrifying vision of the children being urged to fight has sparked outrage and calls for more to be done to protect children.

‘What this sort of activity suggests is that we’re not investing enough in trying to prevent these crimes happening in the first place,’ victim advocate Michael O’Connell said.

The police attended the scene, but by the time they arrived the fight was over. They dispersed the group, but nobody was arrested.

Residents said they fear without tougher action from the authorities, the violence will continue.