Childhood obesity reaches record-high: 23% of Reception pupils and 35% of those in Year 6 are now overweight or obese, worrying study shows

Nearly a quarter of children in England’s reception classes and more than a third of Year 6 pupils are now overweight or obese, a worrying new study revealed today.

The Government report found 21 per cent of those in Year 6 were obese, up from a previous high of 20.2 per cent the year before.

A total of 35 per cent of those aged ten or 11 were classed as overweight or obese.

A total of 23 per cent of reception children were overweight or obese in 2019/20.

Almost a quarter of children in Reception classes and 35 per cent of Year 6 pupils are now overweight or obese, a worrying new study shows. Pictured: Stock image 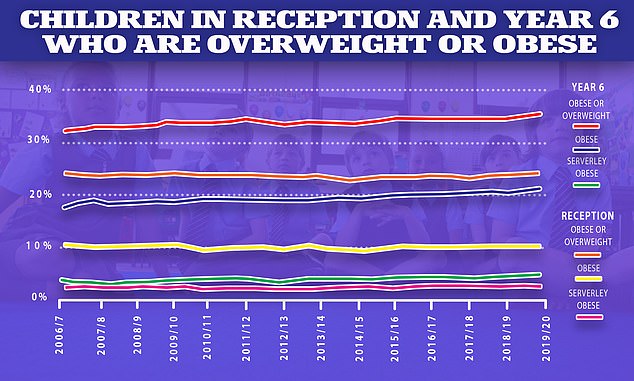 Boys have a higher obesity prevalence than girls in both age groups, the report from the Government’s National Child Measurement Programme also found.

The report analysed the Body Mass Indices (BMI) of 890,608 children from Reception and Year 6 classes in mainstream, state-maintained schools in England.

It contains analyses of BMI classification rates by age, sex and ethnicity as well as geographic analyses. 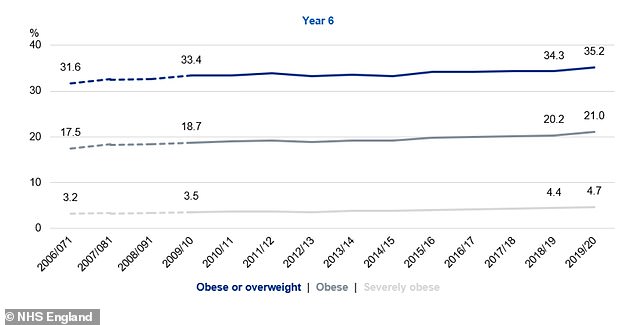 The Government’s National Child Measurement Programme found obesity prevalence in Year 6 children has increased from 20.2 per cent in 2018/19 to its highest ever rate of 21 per cent in 2019/20 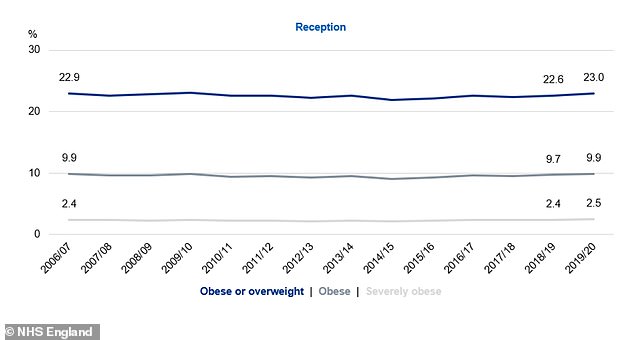 For Reception children – aged four and five – obesity prevalence has risen to its highest level since 2006/7, with 9.9 per cent of pupils in this category 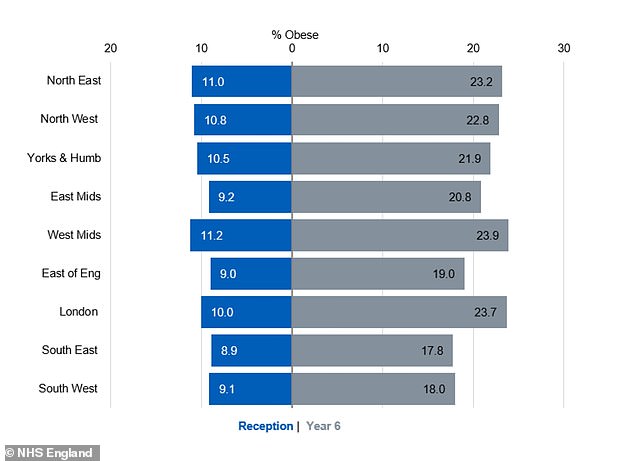 Pictured: Obesity prevalence in Reception and Year 6 children in different regions of England

Sidonie Sakula-Barry, the World Cancer Research Fund’s health promotion manager, said: ‘Every year this data on children’s weight is released, and every year childhood overweight and obesity has increased.

‘This trend will not change unless our commitment to ending child obesity is driven by action from Government, food industry, and the public to make healthier food affordable and accessible to all – it’s not a coincidence that obesity rates are twice as high in the most deprived areas compared to the least deprived.

‘Until we do that, obesity will remain high, increasing our children’s risk of cancer in adulthood, and obesity prevalence will remain highest among children living in the most deprived areas.’