Childhood obesity could be the result of changes in the reward centre of a young brain that leads to a ‘vicious cycle’ of overeating, a new study found.

Researchers from Yale University studied the brains of more than 5,000 children using a novel MRI technique that shows up signs of inflammation.

They found a part of the brain called the nucleus accumbens delivered a ‘hit’ to certain children when they eat junk food – the same children who were overweight and had gained weight when checked on by researchers a year later.

The team hope the information can help identify children at risk of problem eating and target them with diet advice early on before it becomes a serious issue.

Childhood obesity could be the result of changes in the reward centre of a young brain that leads to a ‘vicious cycle’ of overeating, a new study found. Stock image

Study author Richard Watts said inflammation was known to be associated with obesity, but until now researchers weren’t sure exactly how the brain responded.

Watts and colleagues believe children who eat junk food may develop brain inflammation that then reduces the thrill they get from further sugary snacks.

This reduced thrill then causes them to eat more of the unhealthy food, creating a ‘vicious cycle of eating bad food leading to wanting more bad food’.

Using a novel MRI technique called Restriction Spectrum Imaging which allows for a closer look at microstructure, the team investigated the cell density of the nucleus accumbens – a brain region involved in reward motivation and eating behavior.

They drew on publicly available data collected as part of the National Institutes of Health-funded Adolescent Brain Cognitive Development Study.

This followed the brain development and health outcomes in over 11,000 children.

The researchers found that the higher the density of cells in nucleus accumbens, the larger the waist circumference of the child.

‘Even more impressive finding was that the density of cells in this region predicted increases in waist circumference and body mass index one year later,’ said Kristina Rapuano, a psychology post-doctoral fellow at Yale and first author on the study.

Previous studies in animals have shown that a diet high in saturated fats can lead to inflammation in the brain and an increase in the number of glial cells. 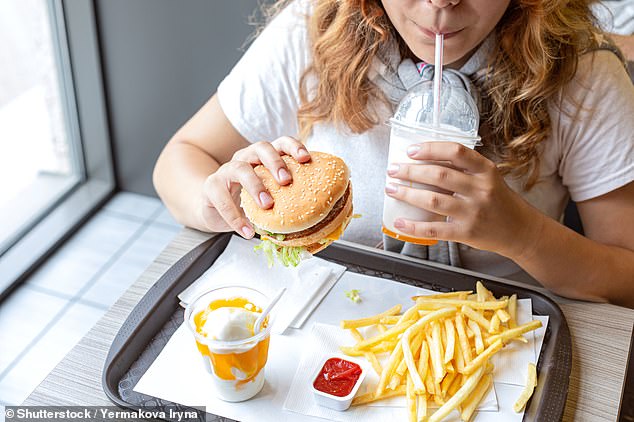 It is thought children who eat junk foods may develop brain inflammation that then reduces the thrill they get from further sugary snacks – causing them to eat more. Stock image

These support the function of neurons in the nucleus accumbens region of the brain and the increase in these cells can trigger compulsive eating in animals.

Casey noted that rates of childhood obesity worldwide have quadrupled over the past 40 years and is in part due to greater accessibility of unhealthy foods.

This study is a step towards better understanding the neurobiological mechanisms underlying childhood weight gain, which will be critically important to inform early intervention and obesity prevention strategies, the authors explained.

The findings have been published in the journal Proceedings of the National Academy of Sciences.

OBESITY: ADULTS WITH A BMI OVER 30 ARE SEEN AS OBESE

Obesity is defined as an adult having a BMI of 30 or over.

A healthy person’s BMI – calculated by dividing weight in kg by height in metres, and the answer by the height again – is between 18.5 and 24.9.

Among children, obesity is defined as being in the 95th percentile.

Percentiles compare youngsters to others their same age.

For example, if a three-month-old is in the 40th percentile for weight, that means that 40 per cent of three-month-olds weigh the same or less than that baby.

The condition costs the NHS around £6.1billion, out of its approximate £124.7 billion budget, every year.

This is due to obesity increasing a person’s risk of a number of life-threatening conditions.

Such conditions include type 2 diabetes, which can cause kidney disease, blindness and even limb amputations.

Research suggests that at least one in six hospital beds in the UK are taken up by a diabetes patient.

Obesity also raises the risk of heart disease, which kills 315,000 people every year in the UK – making it the number one cause of death.

Carrying dangerous amounts of weight has also been linked to 12 different cancers.

This includes breast, which affects one in eight women at some point in their lives.

Among children, research suggests that 70 per cent of obese youngsters have high blood pressure or raised cholesterol, which puts them at risk of heart disease.

And if children are overweight, their obesity in adulthood is often more severe.

As many as one in five children start school in the UK being overweight or obese, which rises to one in three by the time they turn 10.