A strong earthquake has hit central Croatia, killing one child and injuring scores more as well as causing major damage to homes and other buildings in a town southeast of the capital.

Authorities said a girl was killed and at least 20 people were injured in the quake on Tuesday.

Residents remove debris from a street from a building damaged in an earthquake, in Petrinja, Croatia, Tuesday 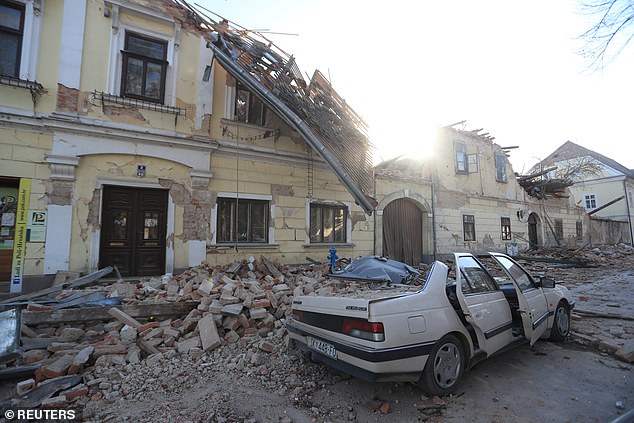 Destroyed houses and a car are seen on a street after an earthquake in Petrinja, Croatia December 29 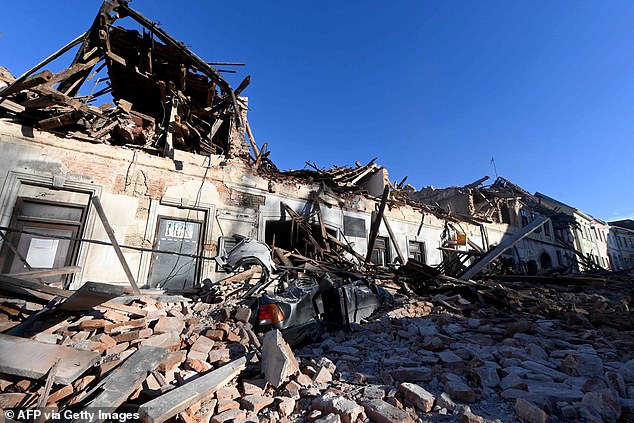 The wreckage of a car and damaged buildings in Petrinja, some 50kms from Zagreb, after the town was hit by an earthquake of the magnitude of 6.4. 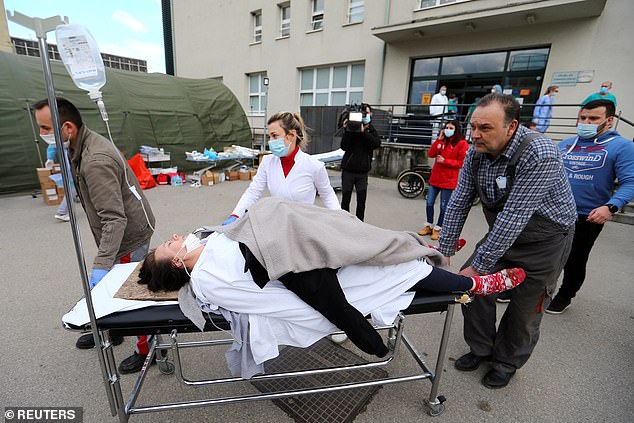 A patient is evacuated outside a hospital after an earthquake, in Sisak, Croatia

The same area was struck by a 5.2 quake on Monday and several smaller aftershocks were felt Tuesday.

Officials said a 12-year-old girl died in Petrinja, a town of some 25,000 people southeast of the capital that was hit hardest by the earthquake. At least 20 people were hospitalized with injuries, two with serious ones, they said.

‘The center of Petrinja as it used to be no longer exists,’ Croatria’s state HRT television said in its report. ‘One girl died and there are injuries and people inside collapsed buildings.’ 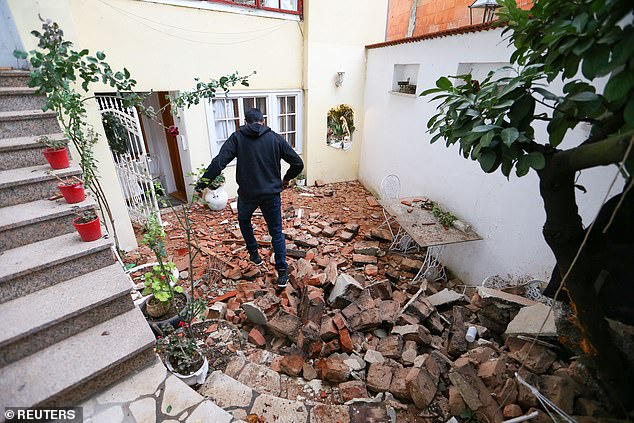 A man walks over debris after an earthquake, in Zagreb, Croatia on December 29 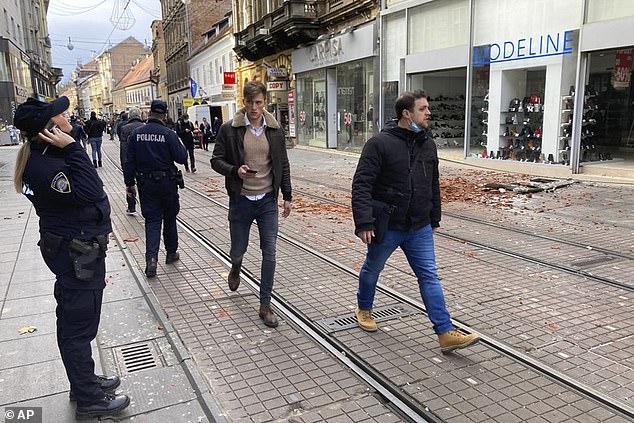 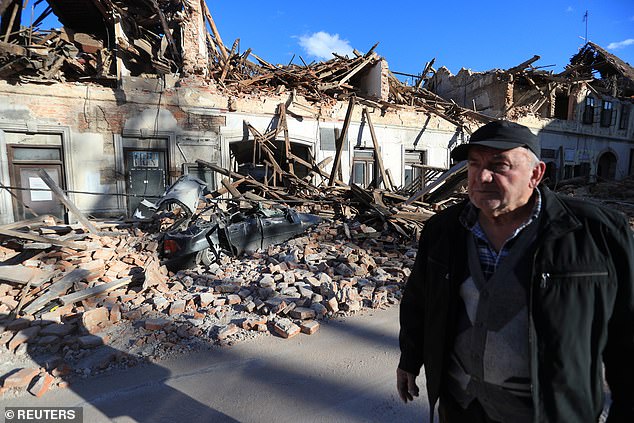 A man stands on a street next to destroyed houses on a street after an earthquake in Petrinja, Croatia December 29

‘My town has been completely destroyed. We have dead children,’ Petrinja Mayor Darinko Dumbovic said in a statement broadcast by HRT TV. ‘This is like Hiroshima – half of the city no longer exists.’

‘The city has been demolished, the city is no longer livable,’ he said. ‘We need help.’

Croatian Prime Minister Andrej Plenkovic and other government ministers arrived in Petrinja after the earthquake.

‘They are searching through the rubble to see if there is anyone else there,’ Plenkovic said. ‘The biggest part of central Petrinja is in a red zone, which means that most of the buildings are not usable.’ 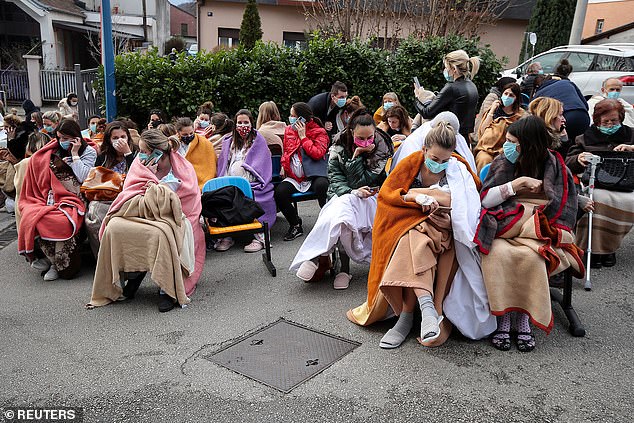 Patients and medical staff are evacuated outside the Sveti Duh Hospital after an earthquake in Zagreb, Croatia 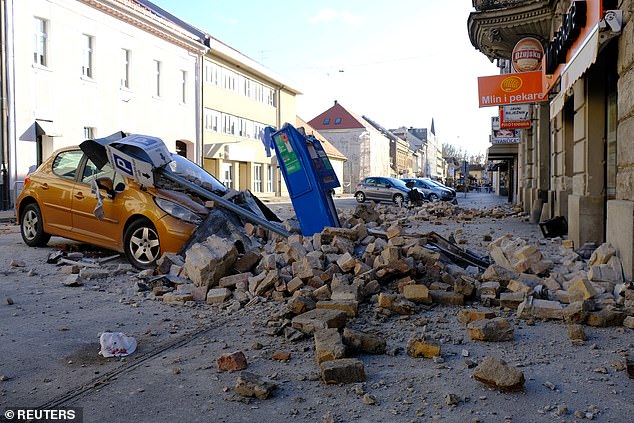 A destroyed car is seen on a street after an earthquake in Sisak, Croatia on December 29 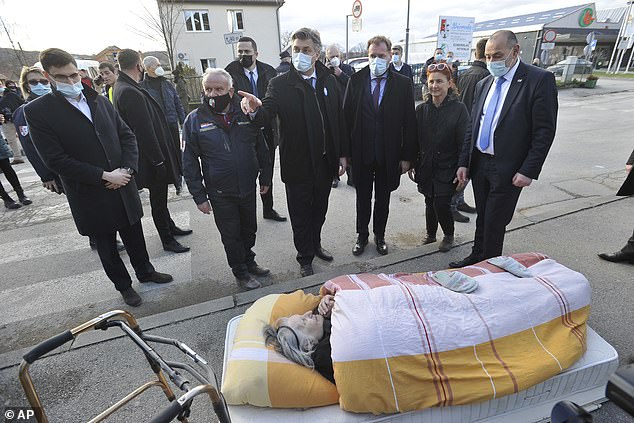 Croatian Prime Minister Andrej Plenkovic, centre, points his finger as he stands next to an elderly woman who was evacuated because of an earthquake, in Petrinja, Croatia

He said the army has 500 places ready in barracks to house people, while others will be accommodated in nearby hotels and other available places.

‘No one must stay out in the cold tonight,’ the prime minister said.

European Commission President Ursula von der Leyen said on Twitter that she spoke with Plenkovic and instructed an envoy to travel to Croatia as soon as possible.

As a Mediterranean country, Croatia is prone to earthquakes, but not big ones. The last strong quake struck in the 1990’s when the picturesque Adriatic coast village of Ston was destroyed. 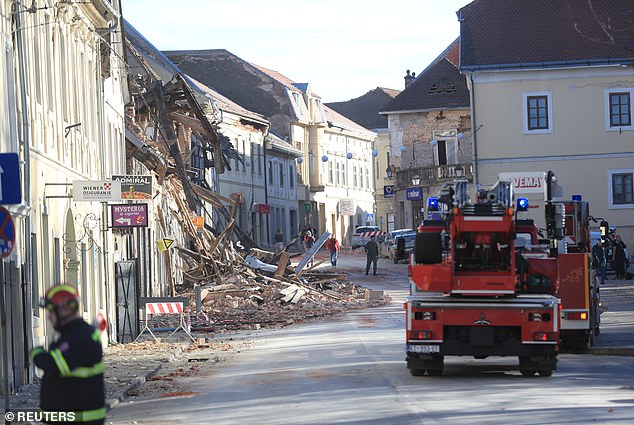 Firefighters arrive after an earthquake in Petrinja, Croatia. European Commission President Ursula von der Leyen said on Twitter that she spoke with Plenkovic and instructed an envoy to travel to Croatia as soon as possible 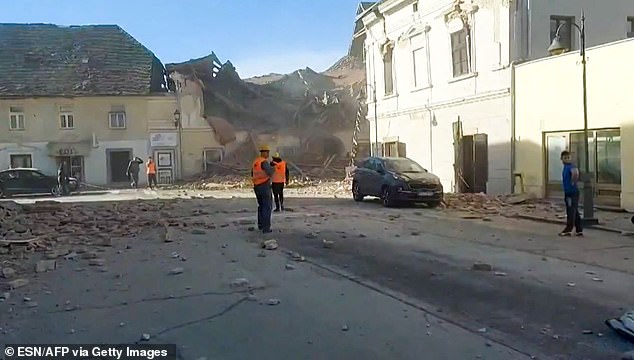 A grab of a video taken and released by the Croatian Red Cross on December 29, 2020 shows rubbles in the streets and the first emergency and rescue teams arriving in Petrinja, after the town was striked by an earthquake of 6,4 magnitude 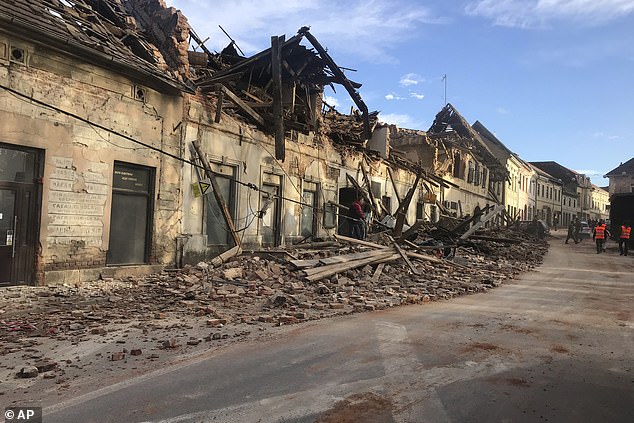 A view of buildings damaged in an earthquake, in Petrinja, Croatia, Tuesday

Regional TV channel N1 reported live Tuesday from Petrinja that a collapsed building had fallen on a car. The footage showed firefighters trying to remove the debris to reach the car, which was buried underneath. A man and a small boy eventually were rescued from the car and carried into an ambulance.

Fallen bricks and dust littered the streets, and many houses were completely destroyed. The Croatian military was deployed in Petrinja to help with the rescue operation.

Croatian seismologist Kresimir Kuk described the earthquake as ‘extremely strong,’ far stronger than another one that hit Zagreb and nearby areas in the spring. He warned people to keep out of potentially shaky, old buildings and to move to the newer areas of the city because of the aftershocks. 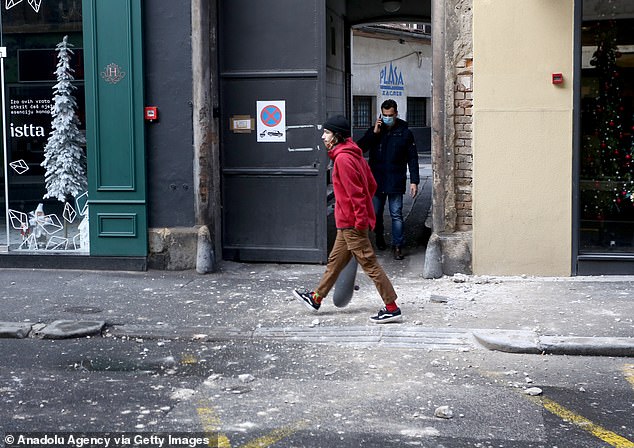 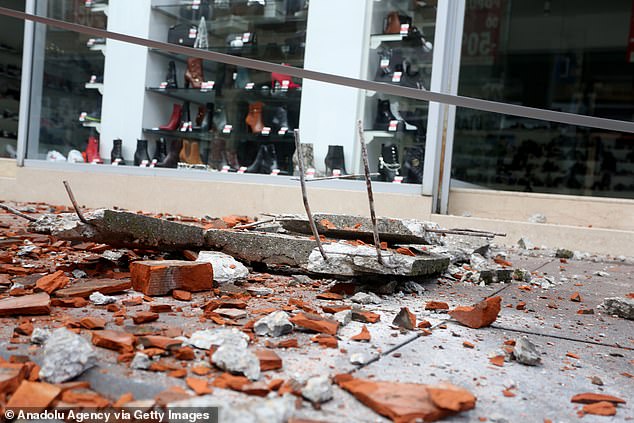 Pieces of damaged buildings are seen on a street after powerful 6.3 magnitude earthquake hits Petrinja town on December 29 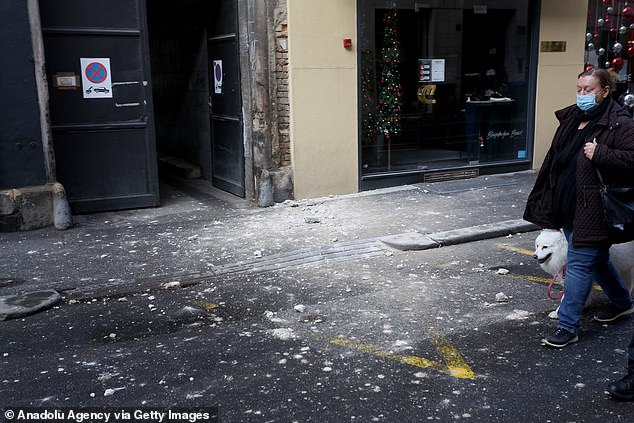 In the capital, people ran out into the streets and parks in fear. Many reportedly were leaving Zagreb, ignoring a travel ban imposed because of the coronavirus outbreak.

The earthquake was felt throughout the country and in neighboring Serbia, Bosnia and Slovenia. It even was felt as far away as Graz in southern Austria, the Austria Press Agency reported.

Authorities in Slovenia said the Krsko nuclear power plant was temporarily shut down following the earthquake. The power plant is jointly owned by Slovenia and Croatia and located near their border.