Does your child hate broccoli? Chemicals in their MOUTH may be to blame! Enzymes in brassica vegetables react with oral bacteria and produce unpleasant, sulphurous odours, study finds

It’s a struggle that many parents regularly face at dinner time, and now a new study may finally shed light on why so many children dislike broccoli.

Researchers from the Commonwealth Scientific and Industrial Research Organisation (CSIRO) in Canberra, Australia found that chemicals in the mouths of children could be behind their dislike of brassica vegetables, including broccoli, cauliflower and sprouts.

Enzymes produced by the vegetables react with bacteria in the mouth and produce unpleasant, sulphurous odours, according to the experts.

While parents had the same levels of enzymes in their mouths, their reaction to broccoli doesn’t tend to be as bad, which the team says could be from learning to accept the food.

Chemicals in the mouths of children could be behind their dislike of broccoli, cauliflower and sprouts, according to a new study into the brassica vegetables. Stock image

Brassica is a genus of plants including cabbage, broccoli and other vegetables, also known as cruciferous.

Food varieties include: Broccoli, cauliflower, cabbage, swede, turnip and seeds used in the production of canola oil and mustard.

There are over 30 wild and hybrid species in cultivation today.

The genus is native to Western Europe, the Mediterranean and temperate regions of Asia.

A dislike for cabbage or broccoli has been shown to be the result of an enzyme that interacts with the mouth tissue, producing a foul odour.

The new study found that the same enzyme is produced by bacteria inside the mouth of some people, and taste for broccoli depends on levels of the enzyme.

Previous research found that adults have different levels of the enzyme in their saliva, but it wasn’t clear whether children also had varying levels, or what the impact was on their food preferences, according to the team.

Damian Frank and colleagues, who conducted this research, wanted to investigate differences in sulfur volatile production in saliva from children and adults.

Dr Frank said it is well known that differences in taste preferences exist between adults and children following innate likes and dislikes.

‘Children are reported to have a stronger preference for sweetness than adults and much-reduced acceptance of bitterness,’ he explained.

‘Bacteria naturally present in some human individual’s saliva can further increase the production of sulphur volatiles in the oral cavity, thereby potentially affecting the in-mouth flavour and perception of Brassica vegetables.’

Using a technique known as gas chromatography-olfactometry-mass spectrometry, they identified the main odor-active compounds in raw and steamed Brassica vegetables, including cauliflower and broccoli.

They then had 98 groups of a parent and child aged between six and eight, to rate the odours produced from the individual compounds coming from the veg.

Dimethyl trisulfide, which smells rotten, sulfurous and putrid, was the least liked odor by children and adults.

The team then mixed saliva samples with raw cauliflower powder and analyzed the volatile compounds produced over time.

There was a large range of levels of sulfur volatile production from one individual to the next, according to the researchers – some having a lot, some very few. 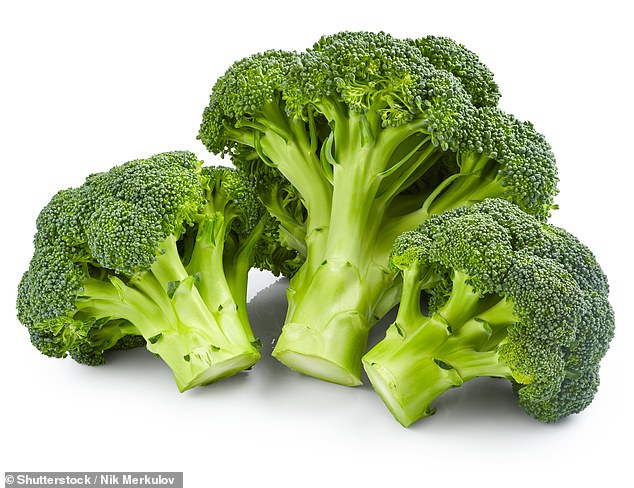 These are all members of the family of vegetables that also includes cabbage, collard greens, kale, and turnips, and often left to the side of a child’s dinner plate. Stock image

They found that children had similar levels to their parents, which can be explained by similar microbiomes in the mouth passed from parent to child.

Children whose saliva produced high amounts of sulfur volatiles disliked raw Brassica vegetables the most, but this relationship was not seen in adults, who might learn to tolerate the flavour over time.

These results provide a new potential explanation for why some people like Brassica vegetables and others (especially children) don’t, the researchers say.

The results have been published in the American Chemical Society’s Journal of Agricultural and Food Chemistry.

MICROBIOME: DOES IT CONTROL EVERYTHING?

Researchers now estimate that a typical human body is made up of about 30 trillion human cells and 39 trillion bacteria.

These are key in harvesting energy from our food, regulating our immune function, and keeping the lining of our gut healthy.

Interest in, and knowledge about, the microbiota has recently exploded as we now recognise just how essential they are to our health.

A healthy, balanced microbiome helps us break down foods, protects us from infection, trains our immune system and manufactures vitamins, such as K and B12.

It also sends signals to our brain that can affect mood, anxiety and appetite.

Imbalances in the gut are increasingly being linked to a range of conditions. Last year, scientists at California Institute of Technology found the first ever link between the gut and Parkinson’s symptoms.

The composition of our gut microbiota is partly determined by our genes but can also be influenced by lifestyle factors such as our diet, alcohol intake and exercise, as well as medications.