EXPRESS INFORMER > Sports > Chelsea: Ben Chilwell is back with a bang for club and country after Euro 2020 snub

Ben Chilwell has had rotten luck of late, and there was a look of tiredness in his eyes when his opening goal against Andorra was initially ruled out on Saturday.

Finally gifted a start by Gareth Southgate after being frozen out of Euro 2020 and failing to play a minute of action at the tournament, here was the left-back’s perfect chance to cap off his resurgence at Chelsea and remind the Three Lions boss he has the quality to compete with Luke Shaw.

Up went the referee’s hand as he rifled home from Jadon Sancho’s pull-back, but after a brief wait the goal was eventually given after the United winger was judged to have been onside from Phil Foden’s lofted pass. From despair to relief – as he beamed alongside his team-mates – a feeling that sums up his transformation. 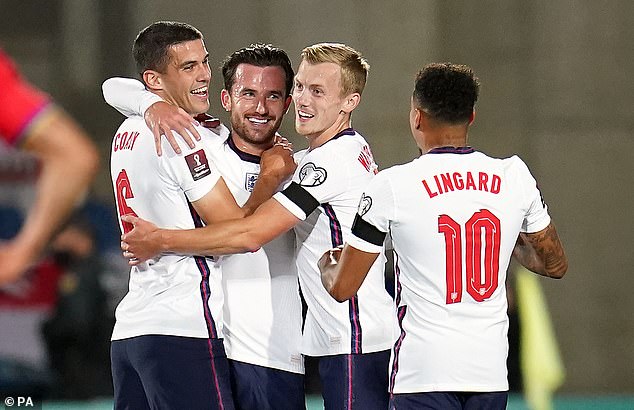 A player who had just enjoyed a starring campaign for Chelsea, capped off by winning the Champions League, would have expected to start for England at the Euros, but from the first game Gareth Southgate made it clear he was not going to be part of his plans for the tournament, despite being named in the 23-man squad.

He wasn’t even named on the bench for the first game against Croatia, with right-back Kieran Trippier preferred at left-back in the 1-0 win – and Chilwell’s exile continued all the way up until the Wembley final with Shaw eventually preferred in the role.

Being left out of a team is never an easy feeling – and his lack of minutes for the Three Lions had a knock-on effect for his club as he was benched for Chelsea at the start of the season, with Marcos Alonso pouncing on his opportunity to become first choice after knuckling down in pre-season. His boss Thomas Tuchel blamed ‘mental tiredness’ after being overlooked by Southgate this summer. 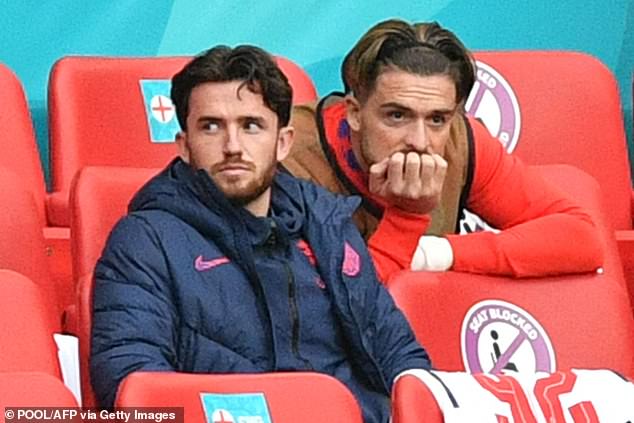 He was benched for all of England’s Euro 2020 campaign, which left him ‘mentally tired’ 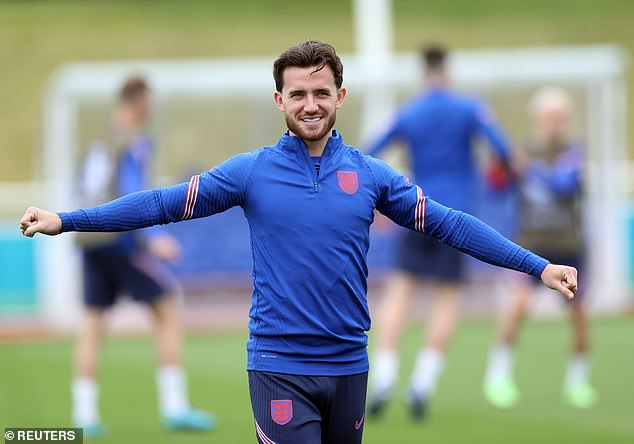 Slowly but surely, Chilwell has been fighting back to become first choice for club and country 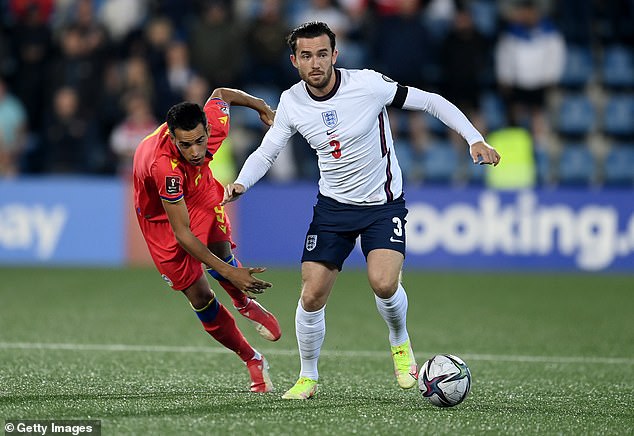 ‘It has absolutely been difficult for him and I think that’s pretty normal,’ the German said ahead of their Champions League opener against Zenit St Petersburg, which would be Chilwell’s first appearance of the season.

‘He had a good end of the season in general and played a lot of minutes for us, with many crucial games at a high level, but then it was a tough Euros for him individually because there were chances where he thought he could have played but he did not.

‘It is a strange feeling, so to keep training for four or five weeks continuously and then he had a personal break, it was hard for him to totally relax and to get this personal disappointment off the shoulders.’

‘When he arrived back, I felt him a bit mentally tired, like he was still worrying about the situation. Now because Marcos was here the whole pre-season, he did every single training session and he took this opportunity so great, with such a huge quality and attitude. Marcos was crucial for us from the first day in training and then he delivered in Chilly’s position.’ 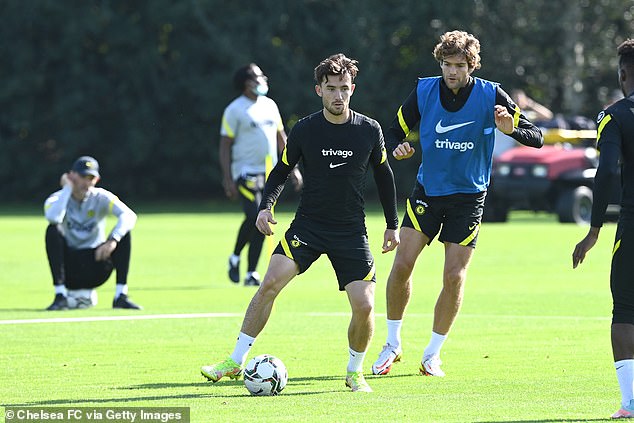 His lack of minutes for England saw Marcos Alonso overtake him in the pecking order at Stamford Bridge, and he has had to show patience

First kept out by Shaw, then Alonso, Chilwell couldn’t catch a break, but Tuchel urged him to be patient and wait for his chance – and he has done just that after four appearances in Chelsea’s last six games.

‘We had some talks with Chilly about the situation,’ Tuchel added. ‘He knows that I would have done the same thing if it had been the other way round, to trust him if he was here and showed this kind of personality and attitude like Marcos did.

‘They push each other and there are no further worries for Chilly. He has to be a bit patient and keep on training. It took some time, we had to give him a little bit of time to be a bit more patient with himself, to find the joy again and to find things a bit easier on the pitch and to not want to force it too hard.

‘The situation has changed for him, he’s in a good shape with his attitude and on the pitch so he can play any minute.’ 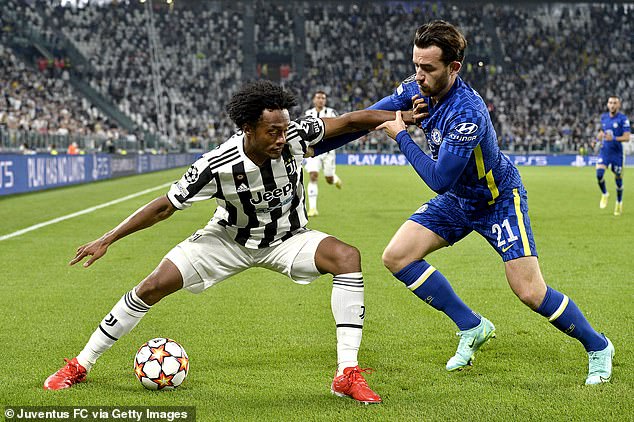 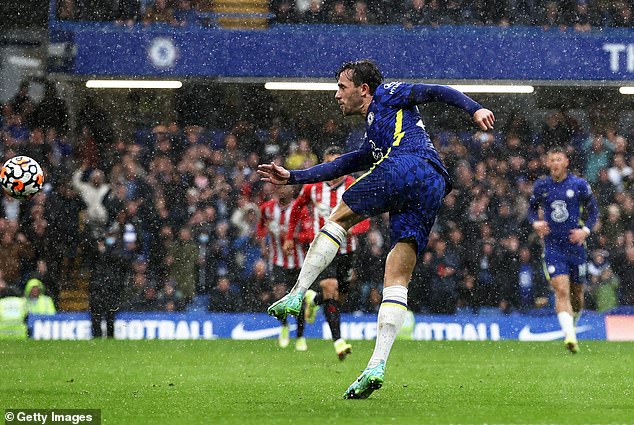 Finally he seized his chance against Southampton, playing 90 minutes and scoring late on 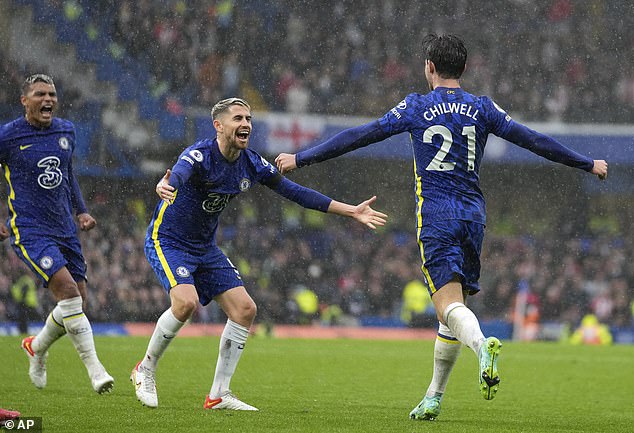 After coming on in Chelsea’s win over Zenit, he went on to secure a starting spot in the League Cup shootout win over Aston Villa, before playing 45 minutes in the Champions League defeat to Juventus and then finally playing the full 90 in the 3-1 victory over Southampton.

Just like against Andorra, Chilwell marked his return to action by getting on the scoresheet, and just like that game – he was made to wait before celebrating, as his acrobatic strike was judged to have crossed the line by inches.

Slowly but surely, the 24-year-old is creeping back to his best self – but it won’t happen overnight. He has only had 231 minutes out on the pitch and is still working hard to become fully fit, but said he had been trusting his manager and doing his bit to ensure he is ready when called upon.

‘I wouldn’t say it’s been frustrating,’ said Chilwell. ‘It’s about being patient, training hard. Marcos has been playing well and I have had to respect that. I’ve been training hard to make sure when I get my chance, I’m ready. 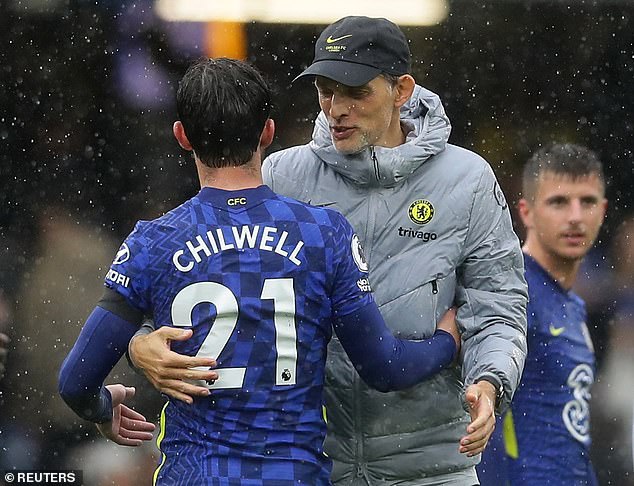 ‘I felt fine on Saturday fitness wise. I’ve been training hard and making sure my fitness is 100 per cent, so when I did have the opportunity to play I was fine to play 90, and make sure I could make the same runs in the 90th minute as I did in the first minute.’

He can’t win every battle, but can certainly win the war to become first choice for club and country. Southgate is set to pick Shaw to start against Hungary at Wembley on Tuesday night but Chilwell will have every chance of making it two starts in a row for Chelsea under Tuchel.

The Blues will travel to Brentford on Saturday and the German coach will have a decision to make about whether Chilwell or Alonso gets his pick at left-back. After some iffy form that has seen the team lose two of their last three, Tuchel needs momentum, and Chilwell has it.