Lauren James is quickly becoming the star of Chelsea’s season. The forward scored her first two goals of the season in Chelsea’s 3-1 win over Aston Villa and assisted Sam Kerr for the other.

It has not been an easy journey for James and she has had to be patient since joining the club from Manchester United last summer.

Those issues are a distant memory and a performance like this will only strengthen her chances of featuring for England in next month’s internationals.

‘Showed her quality with either foot, left foot finish for the first, right foot finish for the second. She’s developing all the time. There is still room for improvement in her game but we’ve been really delighted with the way she’s started the season and we’re looking forward to that continuing.’ 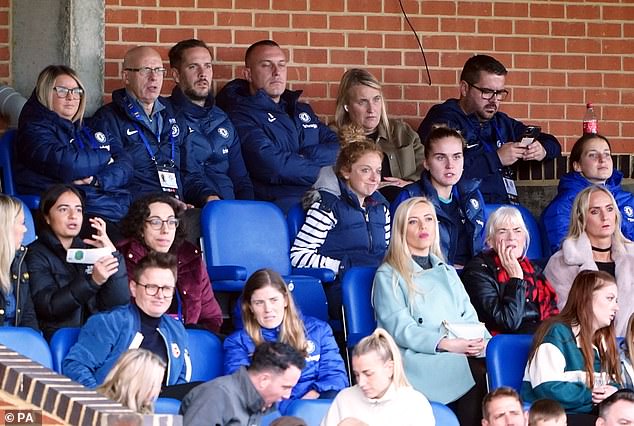 While James shone on the pitch, there was another welcome sight off it. Chelsea manager Emma Hayes was back in the stands for the first time since taking time off to recover from an emergency hysterectomy.

The Blues have won every game in her absence, with assistant coach Denise Reddy and general manager Green taking the reins.

That Chelsea have continued to function without their influential figurehead is testament to the work Hayes and her staff have done. Other teams could have collapsed, but Chelsea have not even struggled.

They came up against a well organised Villa side who have made vast improvements under Carla Ward. But the gap between the two clubs was evident in that Villa could only name five substitutes in comparison to Chelsea’s nine. 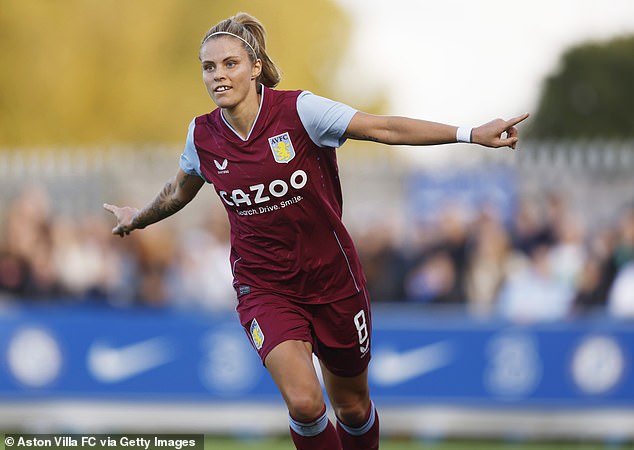 Chelsea’s quality told when James broke the deadlock in the 22nd minute, firing in a left-footed shot after meeting Guro Reiten’s cut-back.

But Villa continued to compete and drew themselves level as Chelsea switched off just before half-time. Sarah Mayling was given time and space to cross for Rachel Daly, who got in front of Millie Bright to flick the ball past Ann-Katrin Berger.

Hayes went into the dressing room at half-time and perhaps offered some words of wisdom as Chelsea re-took the lead two minutes into the second half. Villa lost the ball high up the pitch and Chelsea broke forward with Harder. The midfielder laid the ball off to James and she skipped past Mayumi Pacheco before firing into the roof of the net. 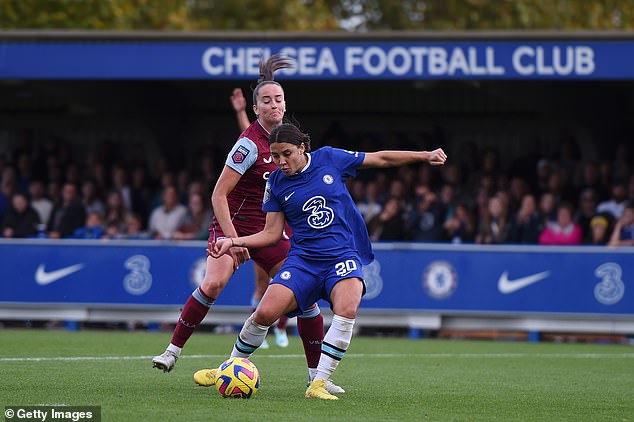 James capped off an excellent performance with an assist as Kerr made it 3-1. The forward won the ball back from Pacheo and teed up Kerr for a first-time finish inside the box. That was game over as Hayes rose to her feet to celebrate.

‘It gave everybody a real boost to have Emma well enough to come and watch the game. She did pop in and wish the girls good luck and was in there at half-time.

‘It’s great she’s making good progress. We look forward to welcoming her back on a more permanent basis as soon as possible.’