We’re going to need as much cheer as possible in our homes this winter. Prices are rising, dark days are looming and there’s no easy salvation lurking on the horizon.

One way to brighten things up is with a beautiful chandelier — and they need not burn too much electricity if fitted with energy-efficient LED lightbulbs.

These classical pieces are making something of a comeback.

Elegant: A crystal chandelier –  these classical pieces are making something of a comeback

And such is their variety that you can find an example to suit almost any interior, whether you want to add a touch of a Regency grandeur or Edwardian swagger.

Check out pictures of expensively renovated London townhouses on the market and you’re bound to see a glittering chandelier hanging in the drawing room. And what a choice there is.

At the influential Decorex interior design show in London this month, the chandeliers from UK firms Kansa and The Soho Lighting Company highlighted the new passion for more ornate lighting, evoking the grand days of the past. The 1960s Space Age and disco era of the 1970s were also represented.

Turn on a chandelier and you’re tuning into history. ‘The Romans used oil to light their chandeliers. And in early Byzantine times, the churches of Constantinople were adorned with vast oil-lit chandeliers,’ says Upham.

Over the next centuries, the fuel sources evolved, with candles being used — from which the chandelier gets its name. Chandelier, a word borrowed from the French, is derived from candela, the Latin for candle.

In the 19th century, oil and candles were replaced by gas and then electricity. Today, antique chandeliers are routinely adapted to 21st-century requirements.

Upham’s interest in chandeliers began at the age of eight when, in his mother’s antique shop, he dismantled a chandelier bought from a stately home sale. ‘You never learn about anything until you take it apart,’ he says.

Upham has had shops in Chelsea and Fulham for years, but from January will be selling only from his website (matthewupham.com) and is offering all his stock at half price.

But he maintains that a return to popularity of the chandelier is based on a move away from the throwaway and a new willingness to embrace second-hand items with the glorious patina of the past. 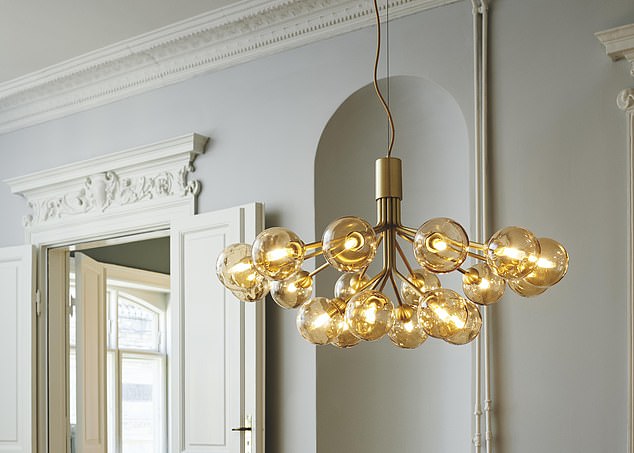 Some pieces, such as those from Baccarat, the Paris-based manufacturer and star of the 19th-century chandelier makers, are complex combinations of glass and gilt-bronze or ‘ormolu’.

The Marie-Therese chandeliers, which were first made in mid-18th century Austria, are draped with swags of glass like rows of necklaces. Later pieces, such as the Art Deco examples, appear more restrained.

Upham is passionate about his dazzling merchandise. But he also regards the chandelier as functional, providing maximum light and impact.

A chandelier traditionally is seen as a great way to draw attention to a lofty ceiling; the higher the ceiling, the longer your chandelier can be.

Although we may associate chandeliers with stately homes, they can make even tiny rooms appear larger, since, as Martin Waller, chief executive of the Andrew Martin furniture and furnishings group explains, a sparkly show-stopping piece will draw the eyes upwards.

A Marie-Therese chandelier is a maximalist piece, with its curved arms in a bronze, gold or silver finish and chains of faceted glass that refract the light. This wow factor explains its appeal among younger generations who are weary of stripped-down Scandi-chic.

John Lewis has a five-arm Marie-Therese style for £599 (johnlewis.com). Wilko has a black version for £50, a low-cost way to move away from minimalism (wilko.com).

Matthew Upham has an early 20th-century offering, with extra sparkle for £3,800.

And the Apiales 18 modern chandelier designed for Nuura by Sofie Refer would be a delightful central feature (£3,819, nest.co.uk).

Pick the right chandelier and it will always look expensive, and there is something for every budget. For example, if you want to add a flavour of the Parisian bistro to your dining area, you can find an example in the early 19th-century teardrop French empire style for £40, now £26.68, at Argos (argos.co.uk). Pooky lighting has a £450 version (pooky.com).

So, let the chandelier revolution continue — but just make sure you call in a professional to do the hanging.