EXPRESS INFORMER > News & Politics > Checking out of the coronavirus hotel: Guests are tested by medical staff as they leave

A small group of guests out of 130 cleared to leave a Tenerife hotel in its fourth day of quarantine over the coronavirus left in a minibus on Friday.

It was not clear where they were being taken.

The Canary Islands regional government on Thursday said it had cleared 130 guests to leave the hotel placed on lockdown after four cases of the coronavirus were detected there but others showed no symptom of illness.

In total, over 700 holidaymakers were in isolation there.

Half a dozen guests including a baby in a pram exited the H10 Costa Adeje Palace south of Tenerife, and underwent temperature scans and in the back of the hotel before boarding a 15-seater minibus, the video shot by hotel guest Christopher Betts showed.

Health personnel wearing protection clothing check the temperature of a guest at the H10 Costa Adeje Palace hotel in La Caleta, in the Canary Island of Tenerife today 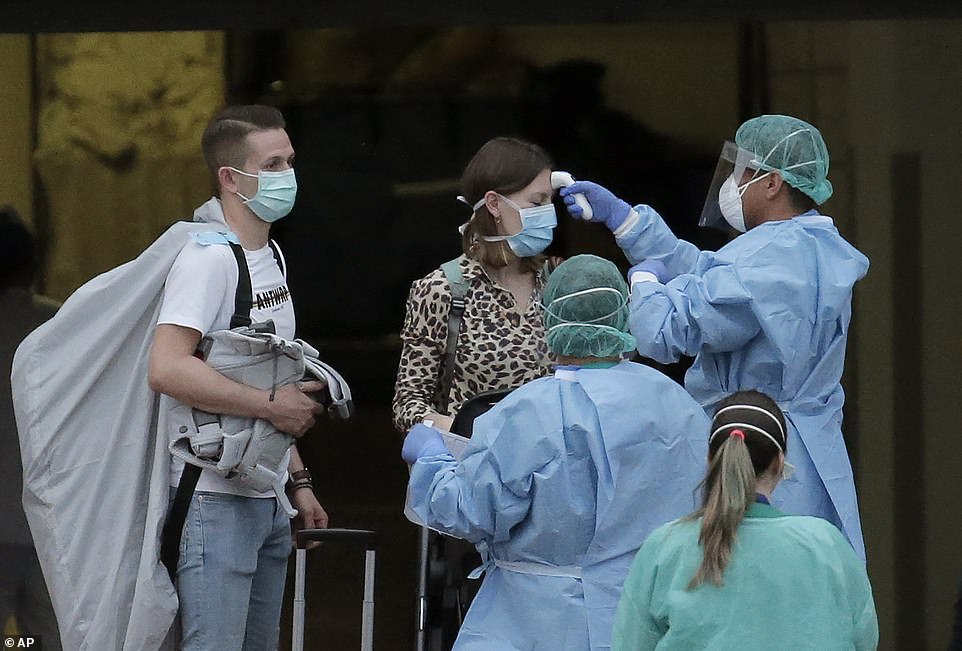 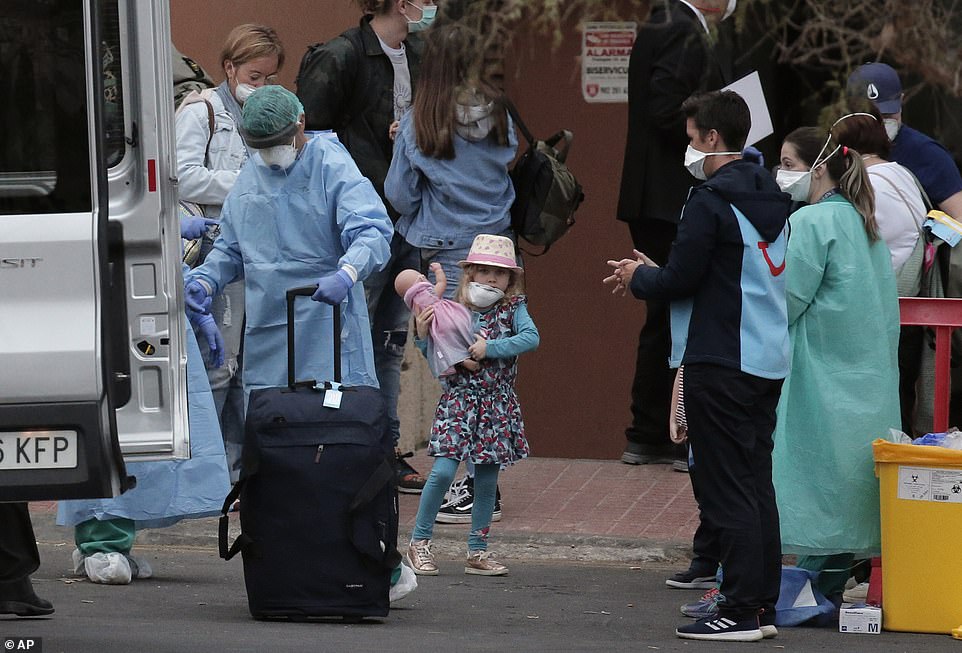 Medical professionals and representatives from TUI assist families after they were released from lockdown at the H10 Costa Adeje Palace Hotel in La Caleta, Tenerife today 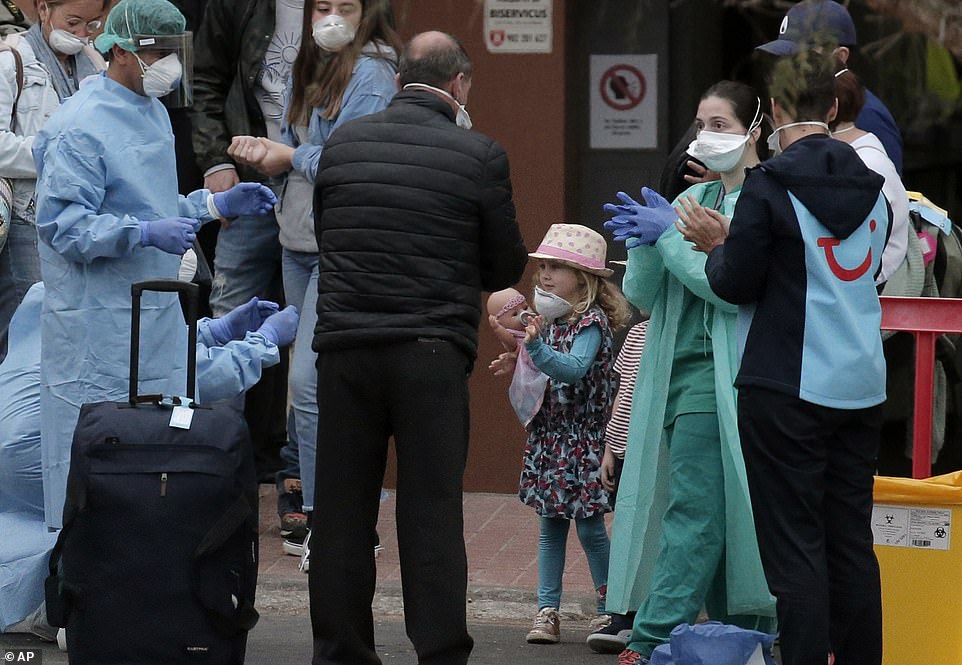 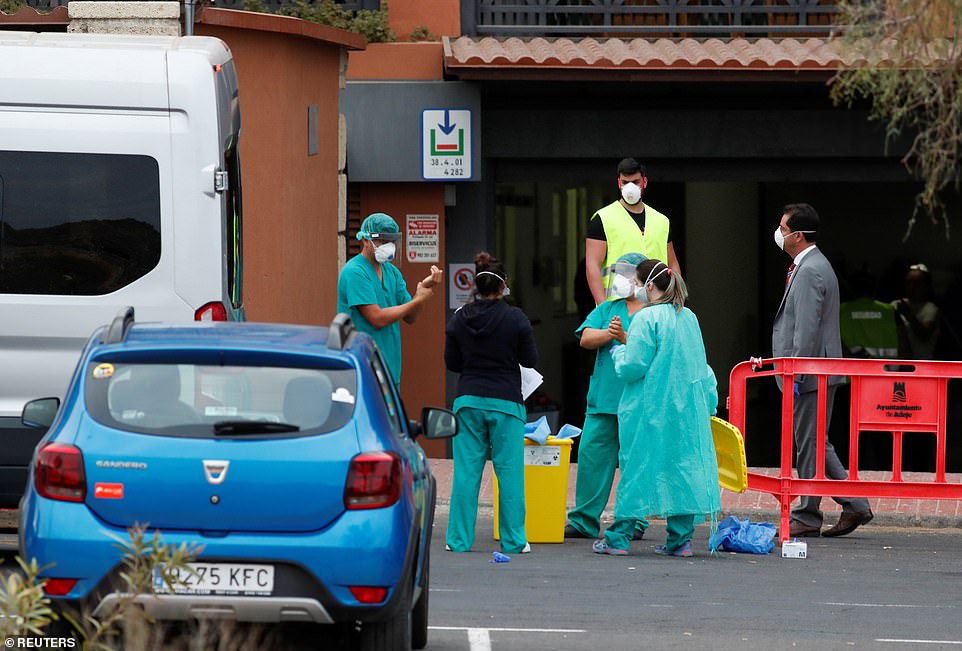 Reporters at the scene saw several families and couples being screened for their temperatures on Thursday morning by what appeared to be medical personnel wearing protective outfits.

The holidaymakers wore face masks and appeared to sign documents before boarding a passengers’ van loaded with suitcases.

One of the people boarding said he was from Belgium.

Spain’s total number of coronavirus cases rose to 26 on Friday, with the bulk of them linked to Italy, hit by Europe’s worst outbreak. 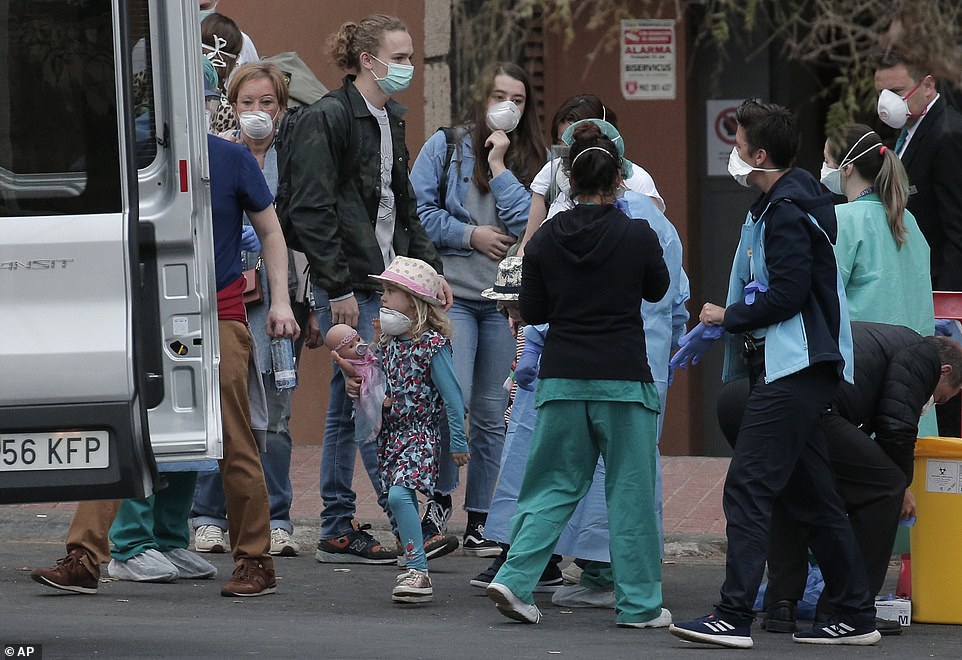 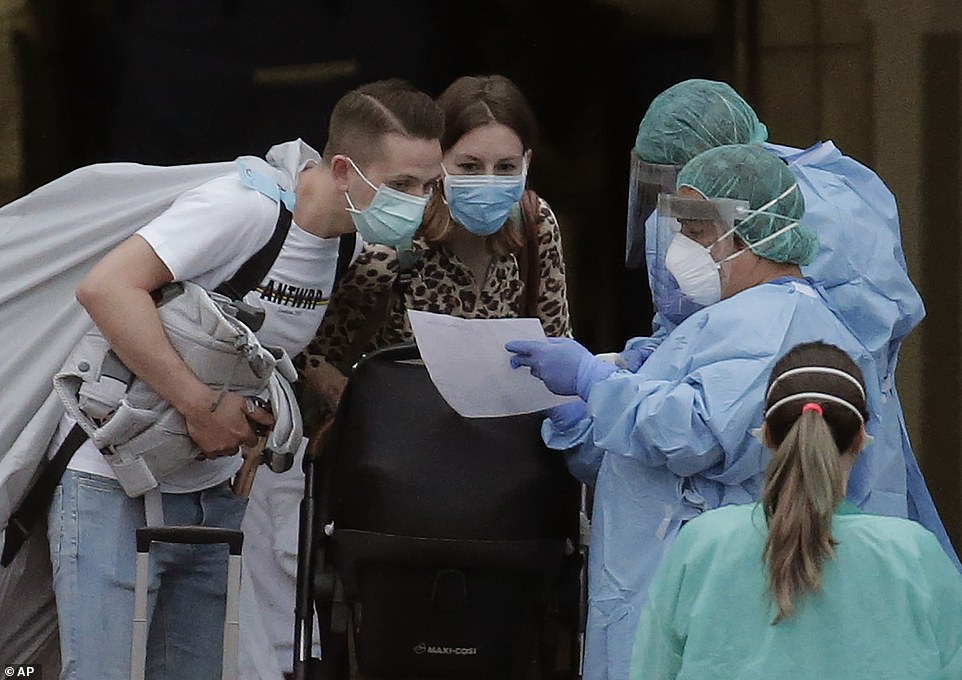 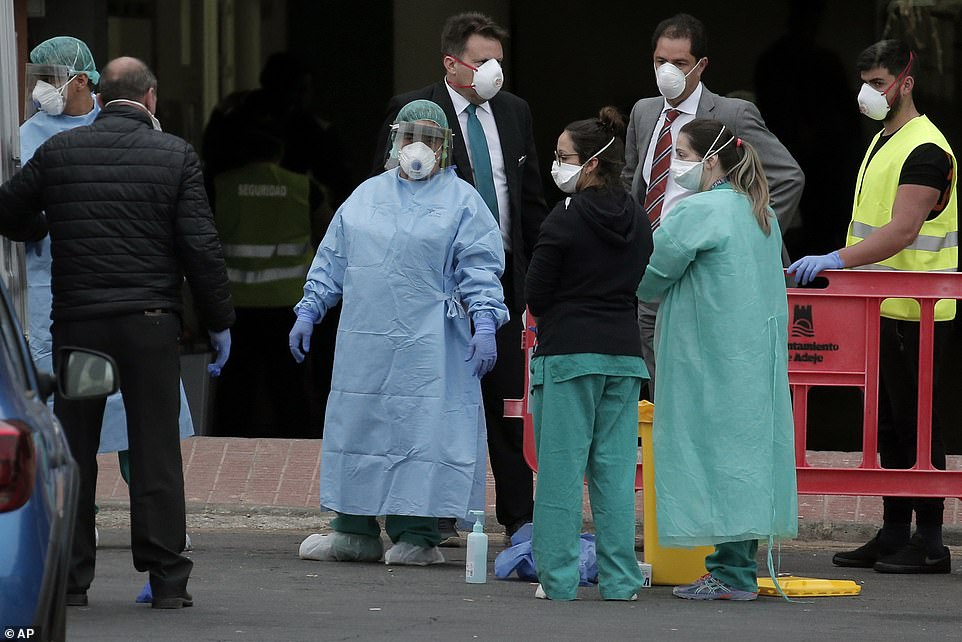 The cleared vacationers, from 11 different countries including Spain, had arrived at the hotel on Monday, after four people who tested positive for the COVID-19 disease had already been hospitalized.

Nobody else at the premises, whether guests or hotel employees, has been found infected, authorities said. The remaining 600 holidaymakers at the hotel, from a total of 25 countries, are to stay in quarantine for 14 days.

Spain has experienced a significant uptick in the number of infections this week, from the two initial cases earlier this month who had been already released from hospital to 25 as of Friday morning.

Although most cases have been connected to the new coronavirus cluster in northern Italy, authorities are investigating what was the source of contagion for three of the newest patients, including a 77-year-old in serious condition, who had not traveled abroad. 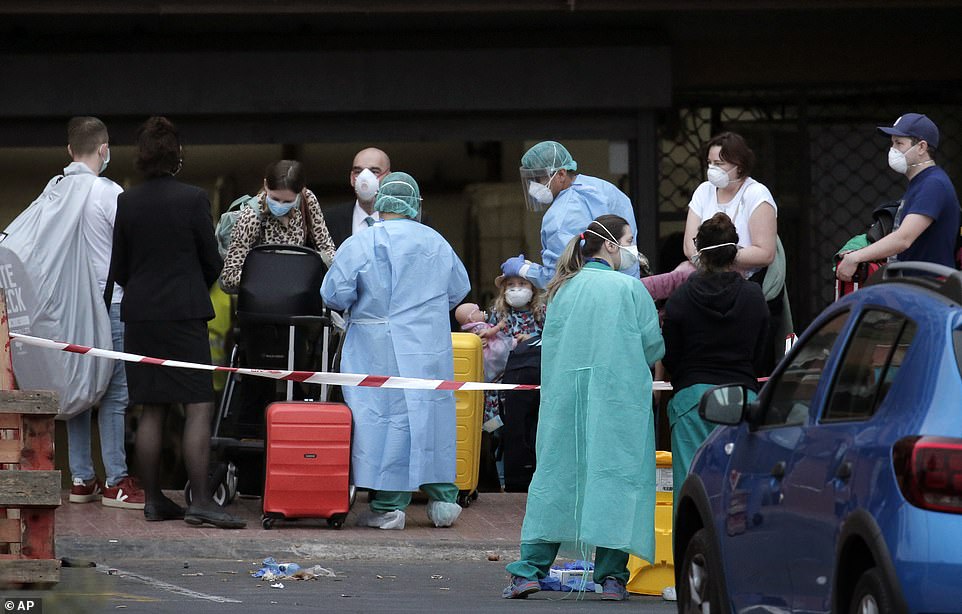 Health personnel wearing protective clothing check the condition of guests, including young children, at the H10 Costa Adeje Palace hotel in La Caleta, in the Canary Island of Tenerife today 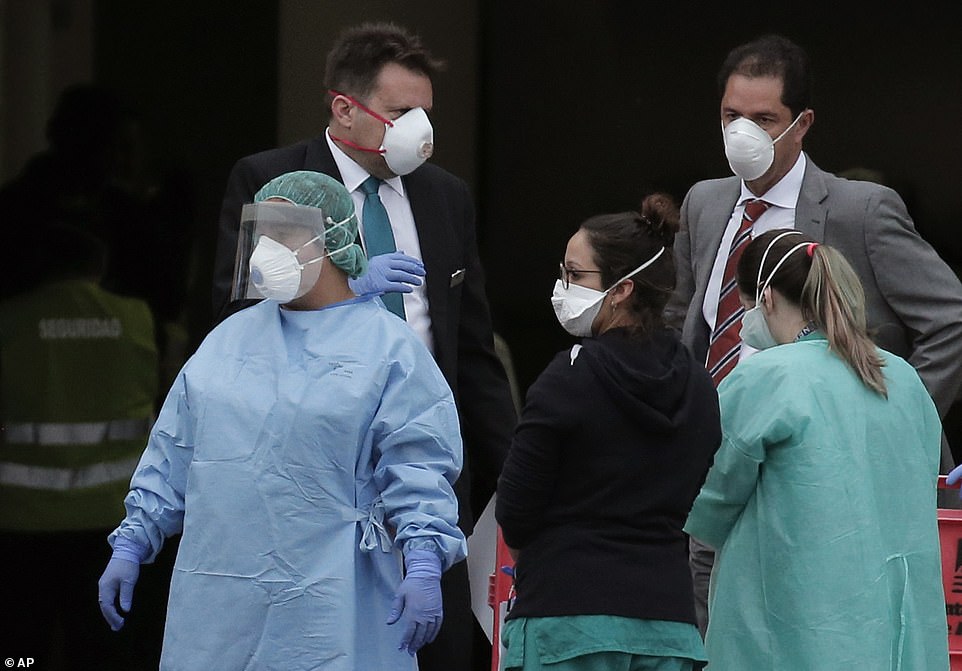 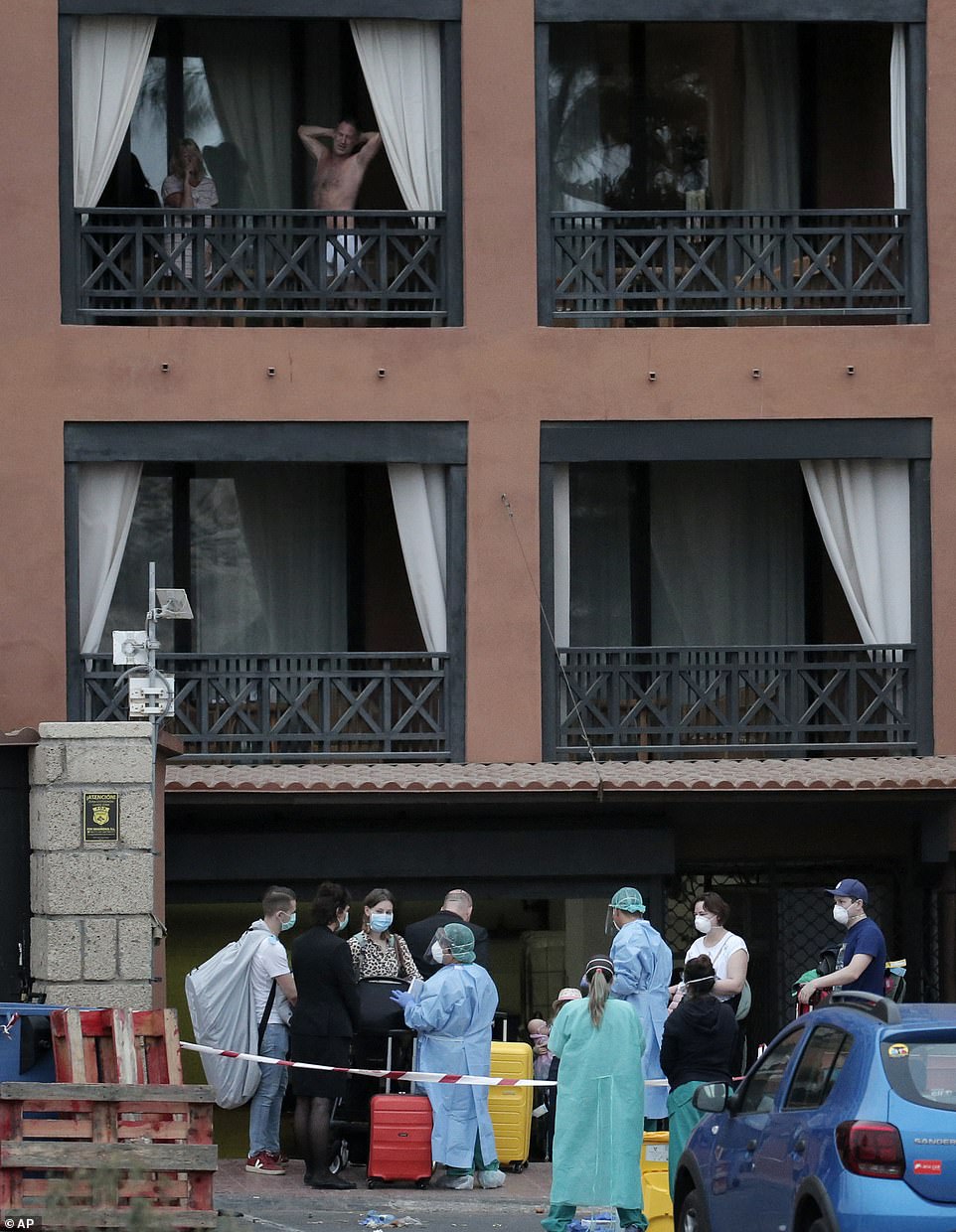 Yesterday, dozens of British tourists were cleared to leave the hotel that was on lockdown over the coronavirus – but 118 have been told they have to stay in quarantine.

The guests at Tenerife’s H10 Costa Adeje Palace Hotel have spent four days in isolation after the coronavirus was detected there in four Italian tourists.

Sources said that 50 of the 168 Britons currently held on the site are free to leave the hotel. But it is not clear at this stage if the newly released Brits will choose to leave the island, or if they will be allowed to return to the UK.

It is not known if the people pictured leaving today were British.

The move appears to have caught the Foreign Office off-guard, who just hours earlier insisted there were no plans to bring trapped tourists back to the UK. 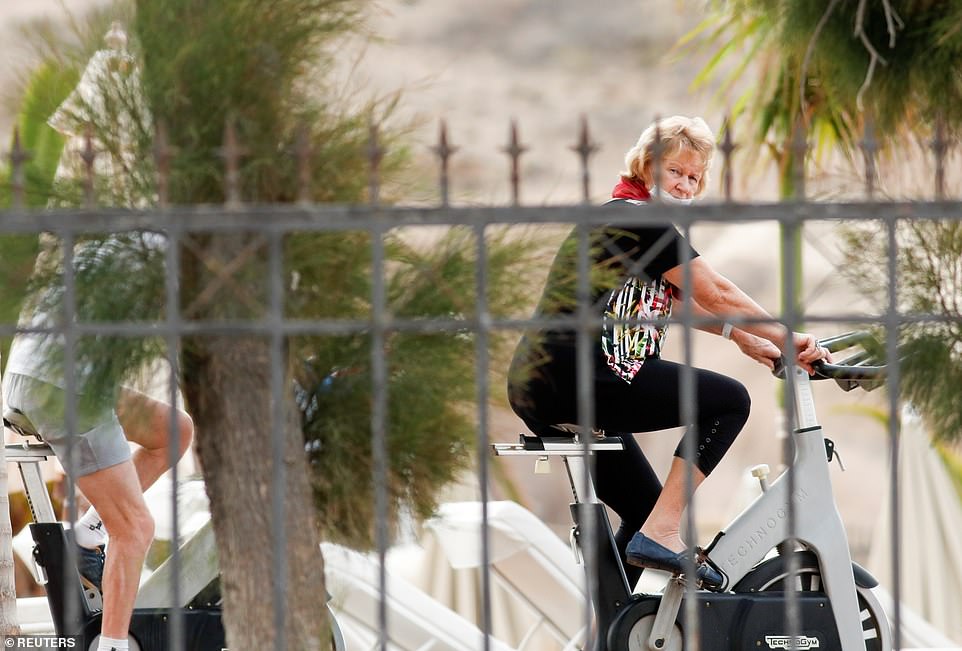 Those who can leave are understood to have arrived on Monday, after the guests who were diagnosed had already left.

Overall, 130 guests from 11 countries have been told they can leave by Spanish authorities.

A statement from the Foreign Office said: ‘We are urgently seeking clarification from the Canary Island authorities following their announcement that 130 tourists of different nationalities will be granted permission to leave the Costa Adeje Palace Hotel.

‘We continue to offer support to all British nationals at the hotel.’

Downing Street defended the response to the situation at the H10 Costa Adeje Palace hotel in Tenerife.

The Prime Minister’s official spokesman said: ‘The Foreign Office has been in contact with more than 100 British nationals who are staying in the hotel. 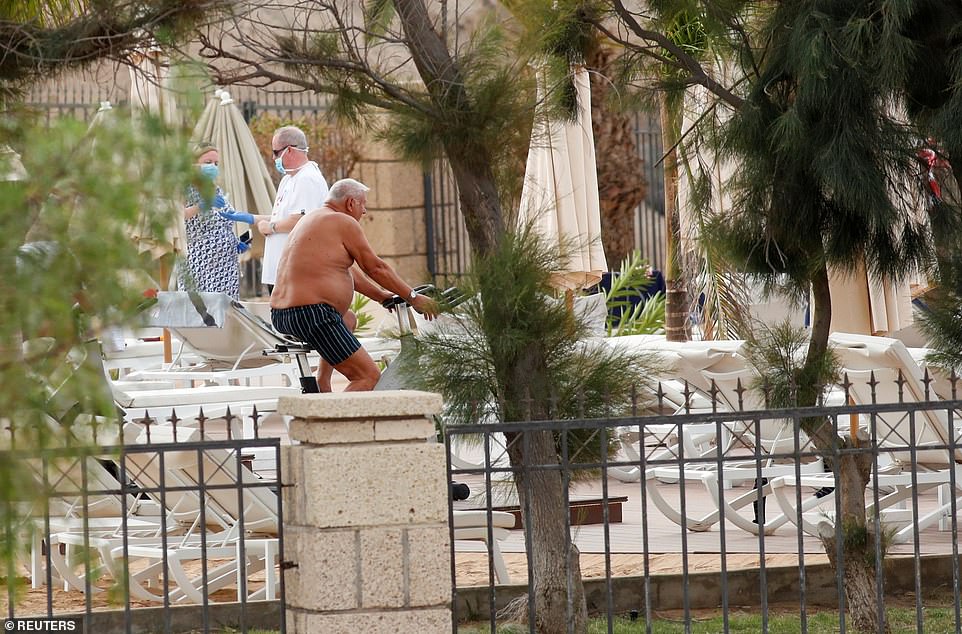 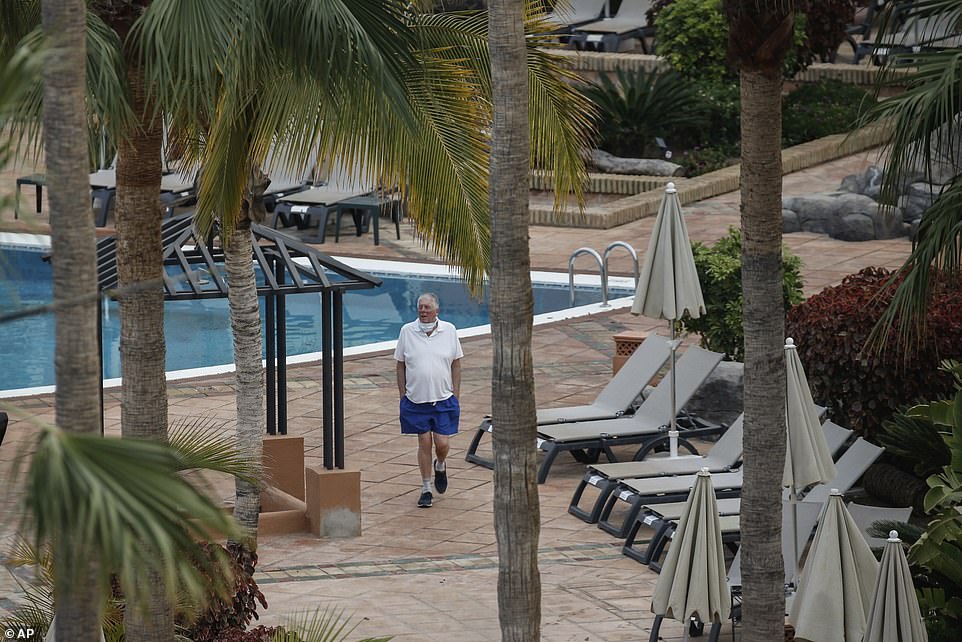 A man walks next to the swimming pool of the Tenerife hotel, which was placed in quarantine by Spanish authorities after four Italian guests tested positive for the virus

‘They are providing them with support, they are also in regular contact with local authorities and tour companies to share information.

‘The quarantine is being managed by the Spanish authorities. We understand that those guests who have been assessed by medical staff and who are not showing symptoms are free to move around within the hotel.’

Pressed on whether there would be an evacuation flight for Britons, the spokesman said: ‘We base all our decisions on medical and scientific advice and everything is kept under review.’ 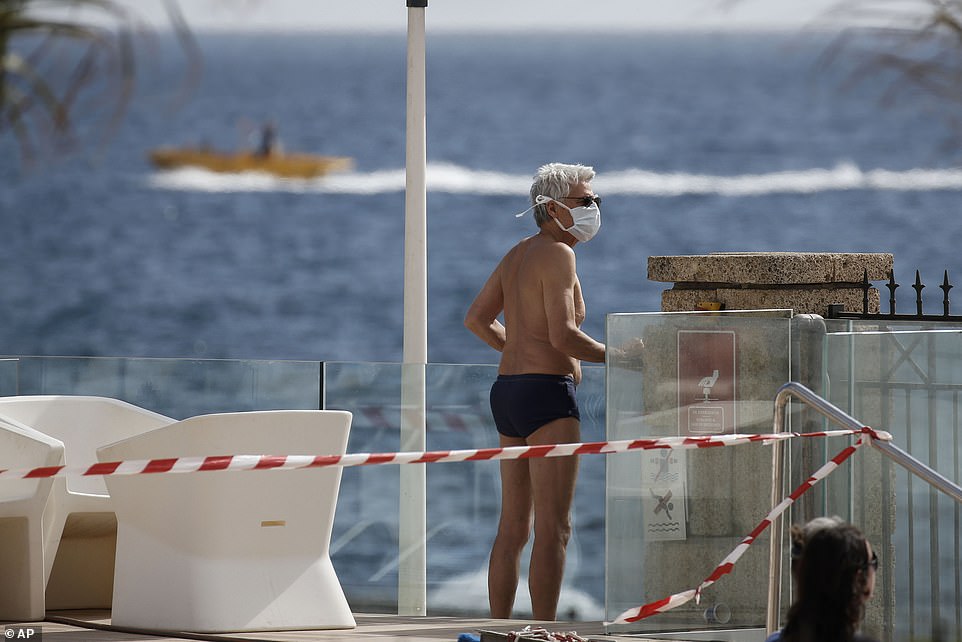 A tourist in quarantine inside the H10 Costa Adeje Palace hotel in La Caleta, in the Canary island of Tenerife

The specialist will work to ‘better understand the public health measures that have been put in place in the hotel’, she said.

‘This includes understanding spread of the virus within the hotel and how the Spanish authorities are monitoring the situation.’

The guests are locked in a four-star hotel and have been allowed to leave their rooms, lounge by the pool and eat in the hotel restaurant.

Julio Perez, a spokesman for the Canary Islands regional government, said today that talks with foreign officials had been taking place in Tenerife and Madrid. 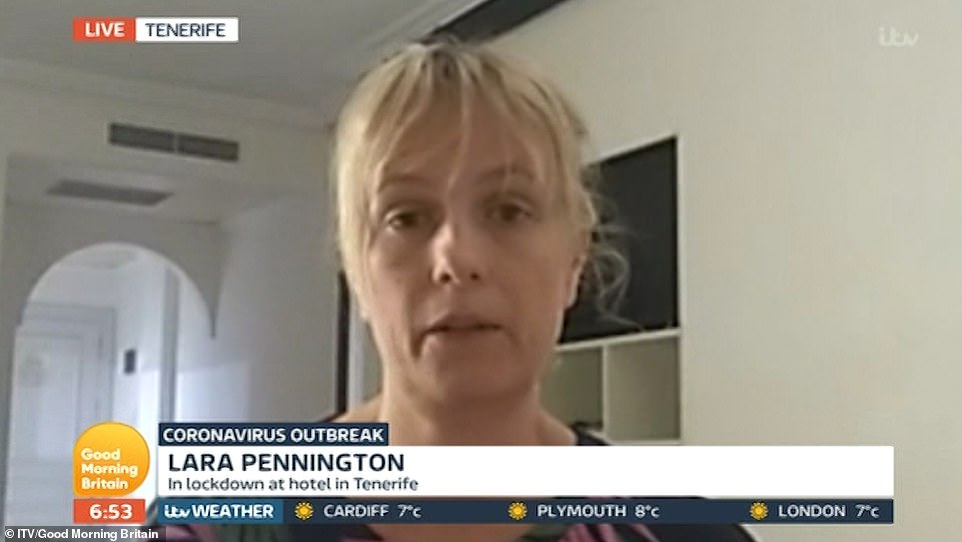 Lara Pennington (pictured), 45, from Manchester, said today that guests at the Tenerife hotel are flouting quarantine rules and risking spreading the virus

Regional health minister Teresa Cruz told a press conference that there had been a ‘good reaction from the respective embassies to repatriate their citizens’.

‘Today the health ministry has a meeting about the same subject, seeking the implication of the different embassies so they can get their citizens home if they feel it is appropriate,’ she said.

Perez added: ‘This morning our government authorities have had meeting with different consuls and in Madrid there’s been talks with ambassadors.

‘If we can assure a transfer in such a way that we know that when they reach their home countries, their respective health authorities and epidemiology services can carry on conducting active monitoring, they could go if this is organised.

‘At the moment it’s safe for the 140-odd tourists who checked in after the people staying at the hotel who have tested positive.’

However, British officials do not appear to have shared the enthusiasm described by their Spanish counterparts.

The Foreign Office says it has spoken to dozens of the British tourists by phone and text, but there are no plans to arrange a repatriation flight.

Officials are keeping the situation under review.

The FCO previously chartered such a flight for British nationals who were trapped on the Diamond Princess cruise ship in Japan.

However, that was only after the Japanese quarantine had been widely declared a failure with hundreds of people infected during the two-week lockdown. 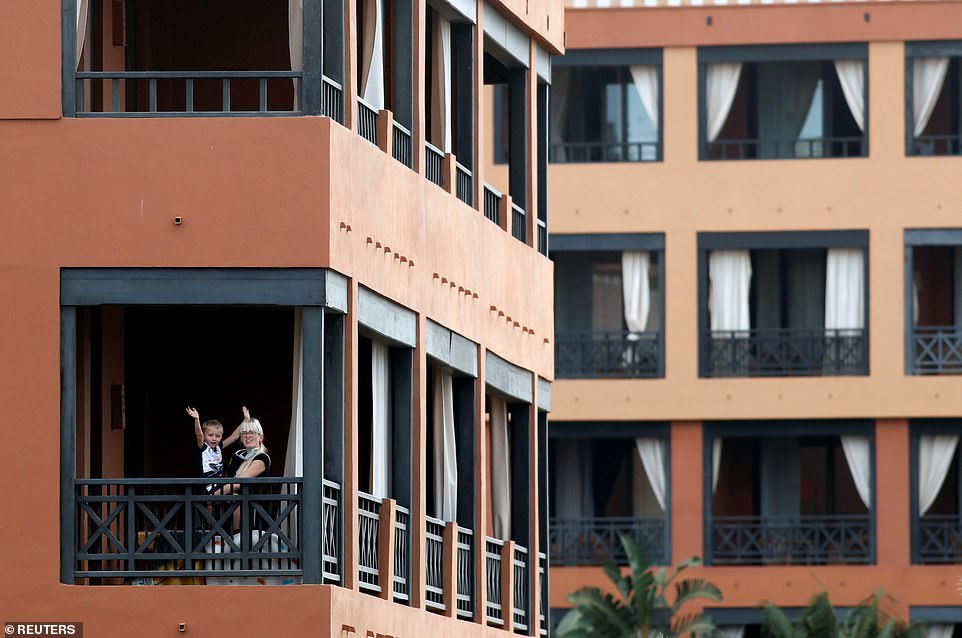 Whitehall was also forced into action in the Japanese case after the United States government unilaterally pulled out more than 300 U.S. nationals.

Before that, countries scrambled to get their citizens home from Wuhan after the start of the outbreak in China.

Earlier a ‘frightened’ British mother trapped at the hotel said she feared the hotel lockdown would turn into another Diamond Princess disaster.

Lara Pennington, who is on holiday with her two young sons and elderly in-laws, said claimed that some guests were failing to follow measures to stop the virus spreading.

‘The Spanish government were advising that if we wanted to we could leave our rooms as long as we were wearing masks and washing hands,’ she told ITV’s Good Morning Britain today.

‘It’s clearly apparent there are large numbers who are not following that process.

‘Containment strategy is clearly not working, it was never going to work. It should be an enforced quarantine,’ said the 45-year-old tourist from Manchester.