PCR tests must be made cheaper to help to protect the UK against Covid variants, MPs demanded last night.

The All-Party Parliamentary Group on Coronavirus also called for automatic e-gates at airports to be upgraded to reduce queues and waiting times in arrival halls in the summer holidays.

They said the proposed digital Covid passport for international travel should include test results to reduce the need for paper documents in transport terminals. And they suggested the cost of PCR tests could be lowered by VAT exemptions or price caps.

Caroline Lucas, the Green MP who is vice-chairman of the group, said: ‘The rapid growth of the Delta variant has shown how we must be vigilant against the risks posed by international travel. Yet despite repeated warnings, ministers are still failing to address overcrowding at airports or fake test certificates that are allowing Covid cases to slip through the cracks.

‘Upgrading e-gates and digitising test results would reduce the risk of transmission in airports and ensure we are no longer relying solely on border force officials to spot fraudulent documents. The Government must learn from its mistakes and ensure its border policy is watertight.’

PCR tests must be made cheaper to help to protect the UK against Covid variants, MPs demanded last night [Stock image]

‘The Government must not yet again allow international travel to jeopardise the hard-won progress we’ve made against the virus.

‘Once this is in place, the Government should also consider measures to reduce the costs of tests such as a VAT exemption or a price cap, as has been done in other European countries.

‘Until we vaccinate the world, testing will remain crucial to our efforts to detect new variants and keep the virus under control.’

The MPs’ demands come after they heard evidence from the Airports Operators Association warning that the deadline to upgrade e-gates by autumn was ‘preposterous’ and that it should have taken place ‘before the summer’. 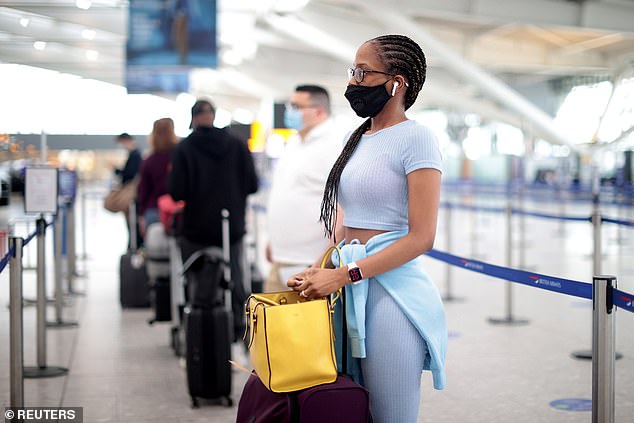 The report warns that ‘current measures put in place at UK entry points by the UK Government are not sufficient to address the threat of importation of new variants’.

It adds that because vaccination does not fully protect against carrying and passing on new variants of Covid-19, a negative PCR test for inbound travellers should continue to be required for the time being.

It says this requirement should remain in place until a high level of vaccination is attained globally, reducing the risk of new variants emerging.

A Daily Mail campaign is calling for ministers to reduce the cost of PCR tests so they can be made cheaper for travellers.