A former councillor has admitted to targeting a museum dedicated to beloved 19th century author Charles Dickens, branding the writer as a ‘racist’.

Ian Driver scrawled  ‘Dickens Racist, Dickens Racist,’ on the outside of the The Dickens House Museum in Broadstairs, Kent, and attempted to black-out the lettering on a street sign for nearby Dickens Road.

The carer wore a denim jacket and cream shorts as he took to the streets in the dead of night to campaign against what he claims is ‘institutionalised racism’ in the seaside town.

The museum on the East Kent coast inspired the home of Betsey Trotwood, a character in the novel David Copperfield, which was released in full in 1950.

Mr Driver, who was a Green Party councillor for four years until 2015, said today: ‘I have been campaigning for quite a long time about what I regard to be institutional racism in Thanet and Broadstairs in particular. 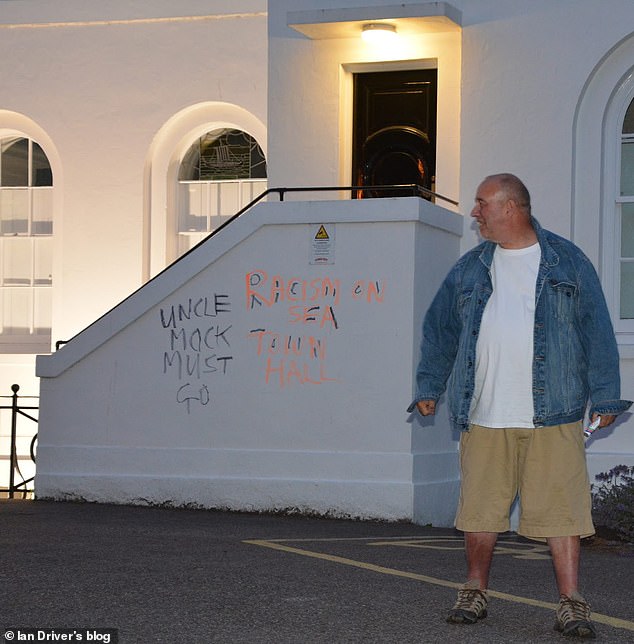 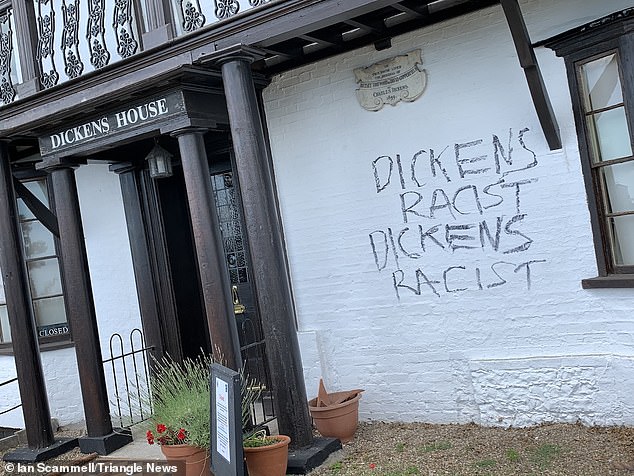 Dickens House, a museum in Broadstairs, Kent, dedicated to the Victorian author, was daubed with graffiti by Mr Driver over the weekend

‘The Broadstairs Folk Week allow, encourage and fund Morris dancers to black up but won’t do anything about it. I think it is quite demeaning towards black people and there is no justification for it.

‘But after the Black Lives Matter protests and seeing people learn their local history like the statue of Edward Colston in Bristol, I decided to do some digging into my hometown of 12 years.

‘Charles Dickens is celebrated in Broadstairs like a local hero and money maker just because he wrote a few books here. In reality, he was a notorious genocidal racist and should be depicted as such. That’s the real Dickens.

‘He supported the Morant Bay rebellion in Jamaica in 1865, the suppression of the Indian rebellion in 1857 saying their race should be wiped out and also referred to black and Asian people as savages.

‘There is no defending him yet there is a whole museum dedicated to him on my doorstep with no mention of his other life as a racist. 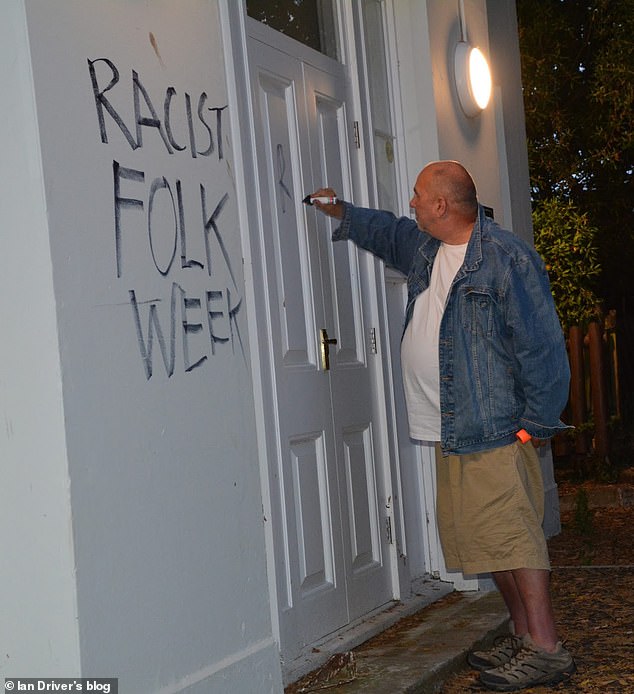 ‘The National Portrait Gallery even has a few paragraphs explaining this other side of history. I think it’s important to get both sides and a balanced view.’

Mr Driver was already under investigation by Kent Police for vandalising a box erected over a ‘racist’ memorial to Uncle Mack, who ran a minstrel group in blackface on the local beach in the early 19th Century, after a Black Lives Matter protest on June 13.

He claims Broadstairs Town Council’s vote to keep the plaque on June 24 was ‘totally provocative and racist’ and forced him to take ‘direct action as a last resort’.

But the father-of-three says he has ‘no regrets whatsoever’ over his latest demonstration and is expecting officers to knock on the door of his Broadstairs home ‘any minute.’

He added: ‘I will go to court and fight my case. If I had my way, the museum would be shut down

‘The council is not listening and has no intention of addressing these issues. I believe that Broadstairs is Racism-on-Sea.

‘The Black Lives Matter campaign is uncovering history we shouldn’t be celebrating. Some of the things these people said and did would be appalling even in their own times – it’s not just outdated views.’ 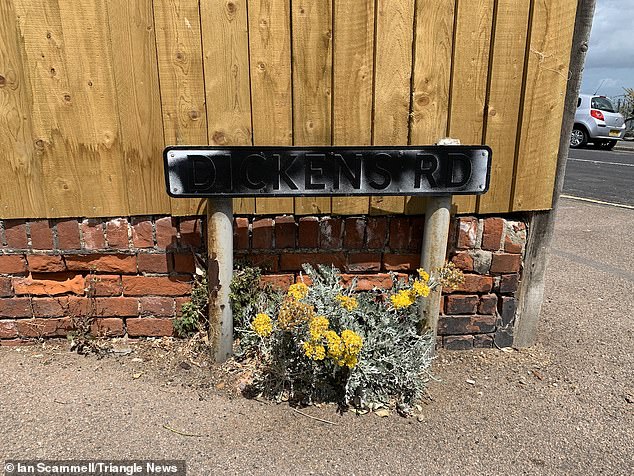 Dickens Road, which is less than 10 minutes walk away from the Broadstairs museum was painted over with black ink

Dickens was said to have visited the home regularly for tea and cake with its owners at the time.

Amid growing calls from the Black Lives Matter movement to remove statues and monuments of racist figures, the museum was targeted by vandals at the weekend.

A statue of slave trader Edward Colston was pulled down and dumped into Bristol Harbour earlier this month, while statues to Oliver Cromwell, Lord Holland and Nancy Astor, the first woman to take a seat in Parliament, have all been defaced in recent weeks.

By the end of the 19th century the museum had come to be known as Dickens House, before it was opened a museum to the writer in 1973.

During his life and more so after his death in 1870, Charles Dickens’ writing has been criticised as antisemitic and racist.

Charles Dickens is one of the most beloved authors of the Victorian era.

His works, including A Christmas Carol and Oliver Twist, are viewed as championing the plight of the working class during the Industrial Revolution.

The celebrated writer’s works have garnered criticism since his death in 1870 for antisemitic and genocidal views. 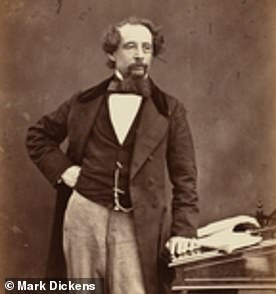 In 1857, following an unsuccessful uprising by Indians against the British East India Company, Dickens wrote he wanted to ‘exterminate’ the race.

Dickens, writing as though he were a addressing Indian citizens, said: ‘I… have the honor to inform you Hindoo gentry that it is my intention, with all possible avoidance of unnecessary cruelty and with all merciful swiftness of execution, to exterminate the Race from the face of the earth.’

In his book The Noble Savage wrote: ‘I call a savage as something highly desirable to be civilised off the face of the earth.’

His depiction of the character Fagin in Oliver Twist has also been described as antisemitic – both during the time Dickens was alive and today.

The first 38 chapters of the book refer to Fagin as ‘the Jew’ more than 250 times’ compared to calling him ‘Fagin’ or ‘the old man’ 42 times.

Dickens said he made the character Jewish as it: ‘Unfortunately was true, of the time to which the story refers, that the class of criminal almost invariably was a Jew.’

In a letter penned in 1857 reacting to an uprising in India, the Oliver Twist and Great Expectations author said he wished to ‘exterminate the Race from the face of the earth.’

While penning a non-fiction book titled The Noble Savage, he suggested Indians should be ‘civilised off the face of the earth’.

Locals spoke of their upset at the graffiti.

Judith Carr said: ‘What madness! Aside from the fact that it is illegal to deface private property, Dickens spent his life pointing out the evils of social injustices of all kinds.’

Phil Harradence said: ‘Please tell me the uneducated, knuckle dragging moron(s) responsible for this have been caught on CCTV?

‘Have we now lost complete control of sense in this country, absolutely disgusting behaviour. What next, the blank cliffs of Dover???’

Gary Angela Mayer said: ‘Disgusting. It was a different time, history, your supposed to learn from it and be better, not be worse.’

Kevin Cripps said: ‘Dickens is dead ! Deal with real live issues, deal with black on black violence deal with modern slavery deal with the slave markets of Libya, deal with anything that isn’t mindless vandalism.’

And Dorothy Welby said: ‘Even if he was, the house wasn’t. A bit sad.’

Carol Calland added: ‘Moronic behaviour. Does their cause, if they have cause, no good whatsoever.’

But Poppy Elizabeth said there was a kernel of truth to the vandalism.

She said: ‘Not justifying it, I dislike graffiti.

‘I’m just pointing out there is a level of truth. A lot of historical figures actually had views of ‘primitive’ cultures.

‘I’m not saying he was a full blown KKK racist, but instead of jumping on this as mindless, do a bit of research and consider why this was put there.’

Robert Cooper replied: ‘Well actually it’s not from lack of research that people label this as mindless.

‘It’s through recognition that morality and cultural views on things like race are fluid.

‘Everybody in Dickens’ time held racist views. You aren’t better than them because you live in a more ‘enlightened’ age; if you and I were born back then we would hold similar views, I bet.’

Dickens was known to be a champion of the poor, however he often defended colonialism and was disparaging of other races.

It’s understood the criminal damage has not been reported to Kent Police, but officers are carrying out enquiries.