A freight train has derailed southwest of Melbourne sending dozens of shipping containers flying off the tracks into a heap of rubble.

The train came off the tracks on the Hamilton Highway between Inverleigh and Gheringhap, about an hour west of Geelong, at about 5.45am on Monday.

The collision saw up to 20 containers smash into each other and become detached from the train with material seen littered across the broken tracks.

No one has been injured in the crash with an investigation into how the freight train became derailed already underway.

A freight train has derailed southwest of Melbourne sending more than a dozen shipping containers flying off the tracks (pictured, containers spill across the tracks)

Aerial footage from Nine’s Today program shows the containers piled on top of each other and water beneath them and the tracks.

Victoria Police said officers were called to the site on Monday morning to provide traffic control but they were no longer needed.

The Australian Transport Safety Bureau is taking control of the scene and investigators have been called in.

It is unknown what kind of freight the train was carrying but it is understood there wasn’t any dangerous material onboard.

The crash comes after a night of heavy rain in the area, however investigators are yet to decipher what caused the train to derail.

In the 24 hours to 9am on Monday morning, Inverleigh recorded 27mm of rain while nearby Warrambine received 50mm and Pollocksford received 44mm.

A large amount of rain did fall on areas west of Geelong between 2am and 3am, however the system moved further east and wasn’t particularly heavy by 6am. 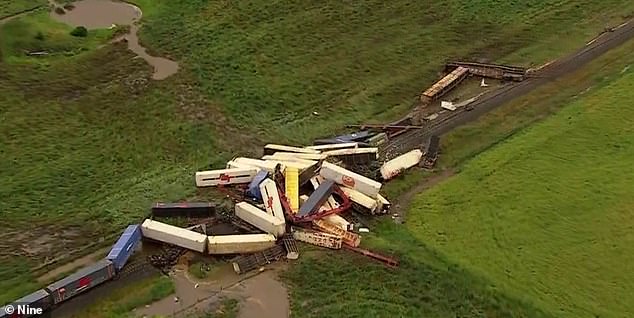 The train came off the tracks on the Hamilton Highway between Inverleigh and Gheringhap, west of Geelong, at about 5.45am on Monday morning (pictured, an aerial view of the scene)