Channel 4 has faced a furious backlash after a transgender comedian stripped completely naked on live television before playing a keyboard with her penis.

The move – now being labelled as ‘misogynistic’, ‘offensive’ and spurring complaints to Ofcom – was streamed live on the channel’s revival of Friday Night Live.

Singer Jordan Gray was concluding an expletive-filled song about her experiences as a trans woman when she performed the controversial stunt.

Among those to tweet their criticism was author Helen Joyce who branded the moment ‘a sex crime committed on camera. While idiots whoop and cheer.’

Another said: ‘Was so looking forward to watching Friday Night Live, a highlight as a teenager. Always a hit and miss show, but this is the first time I actually felt insulted by an act… as a woman. Vile and misogynistic song spat out at woman.’ 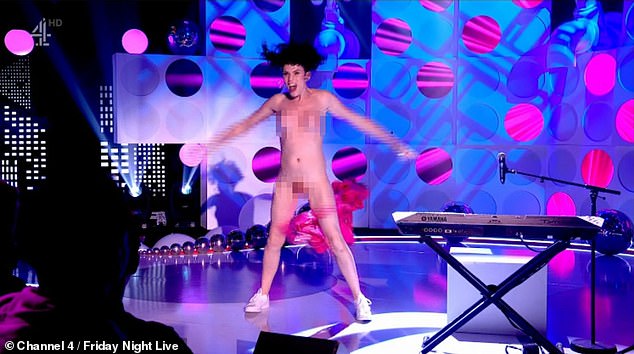 The move – now being labelled as ‘misogynistic’, ‘offensive’ and spurring complaints to Ofcom – was streamed live on the channel’s revival of Friday Night Live

More complaints came in as critics urged each other to report the event to Ofcom – the government approved TV regulator.

One user tweeted: ‘I would like to know how Ofcom will be dealing with this? This sort of misogynistic perversion should not be allowed on TV.’

Another tweeted a screenshot of them submitting an Ofcom complaint, captioned: ‘If anyone wants to do the same…’ 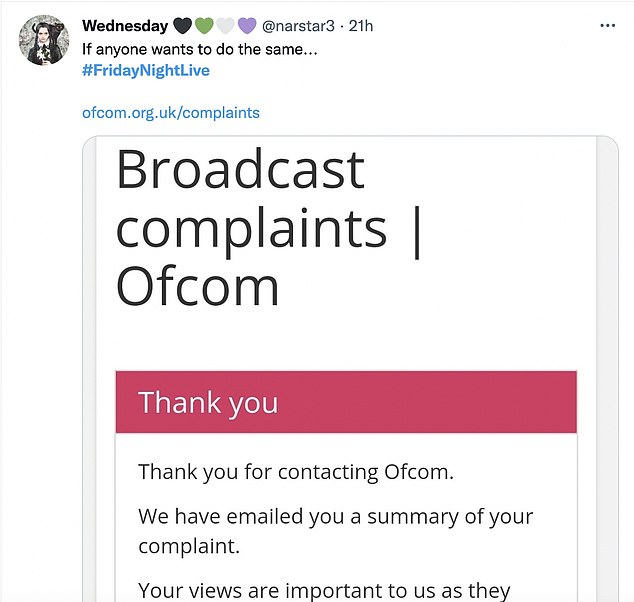 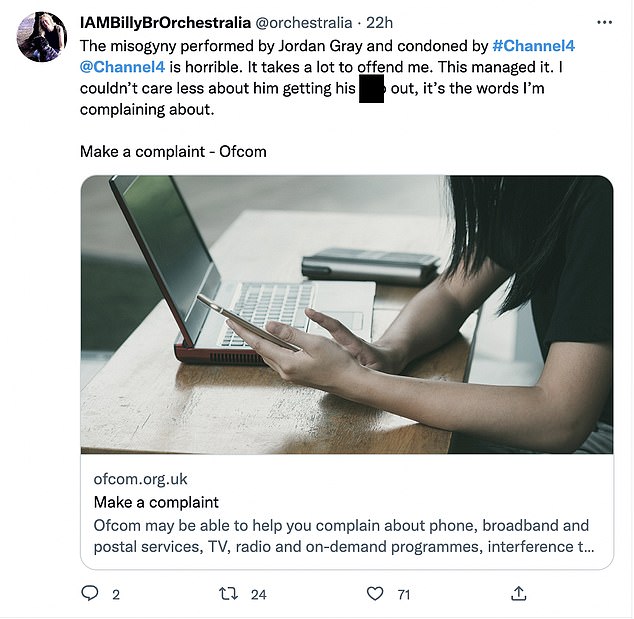 ‘The misogyny performed by Jordan Gray and condoned by Channel 4 is horrible’, another individual added.

‘It takes a lot to offend me. This managed it. I couldn’t care less about him getting his kn*b out, it’s the words I’m complaining about.

The dramatic performance was part of the one-off return of the popular 80s standup show, originally called Saturday Live, which Channel 4 aired as part of its 40th birthday celebrations.

The show included comedians who appeared in the original version of the show, such as Jo Brand and Harry Enfield, as well as new talent like Gray and Rosie Jones, and was hosted by Ben Elton.

Before the performance, Gray, who was the first transgender singer on talent show The Voice in 2016, told her Twitter followers: ‘Tonight we make history.’

‘I haven’t had a Yorkie bar in five years,’ she said at the start of her set, in a refence to the chocolate brand’s former slogan ‘it’s not for girls’.

She opened the song with the lyric: ‘I look out in the faces in this room, and wish that I could crawl back in the womb.

‘And start again, against God’s plans, with different glands and smaller hands.’

The dark curly-haired comedian added: ‘I wish the world could finally understand: I’m more than just a female Russell Brand.’

She then launched into the comedic song referencing the Chuckle Brothers’ ‘to me to you’ skit before saying ‘now back to me – this song’s about me’.

The song moves into her own version of Do-Re-Mi and increasingly intense keyboard playing.

As the song draws to a close, she tells the audience: ‘You know the best thing about live TV? I can do stupid stuff like this!’

She then jumps up from the piano before counting down ‘one, two, three’ and ripping off her suit and exposing herself entirely.

After dancing around stage the naked comedian returns to the keyboard, shouting ‘see you Friday at the London Palladium b*****s’ and briefly plays a few keys with her penis.

She jumps on top of the piano seat to a huge applause from the audience before leaving the stage.

After the sketch, host Ben Elton quipped ‘now that is what I call a kn*b gag’.