We’re all familiar with the experience of time flying…and dragging.

Now scientists have found that our sense of how quickly time is passing is partly caused by changes in our bodies.

They found that greater activity of the sympathetic nervous system (SNS) – i.e. increased heart rate and increased electricity conductance – had a ‘small, but significant’ effect on the feeling of time passing more quickly.

It’s thought to be the first time that these objective measures of physiological arousal have been studied in relation to time perception.

What is the sympathetic nervous system?

The sympathetic nervous system is a network of nerves that helps the body activate its ‘fight-or-flight’ response.

This system’s activity increases when you’re stressed, in danger or physically active.

Its effects include increasing your heart rate and breathing ability, improving your eyesight and slowing down processes like digestion.

Researchers asked 67 people to complete a normal day’s activities while wearing sensors that measured how their sympathetic nervous system was behaving.

They wore a heart rate monitor as well as a skin sensor that measured minute changes in the skin’s conductance of electricity caused by the activity of the sweat glands.

The participants were asked to report, hourly, how fast or slowly they felt the last 60 minutes had gone by compared to normal.

The researchers then analysed the participants’ biological data together with their subjective reports.

‘On the basis of these findings, it is often assumed that changes in physiological arousal, which often accompany fluctuations of self-reported emotions, play an important role in time distortion, but to date this inference has not been tested during real-world activity, using objective measures of physiological arousal.’ 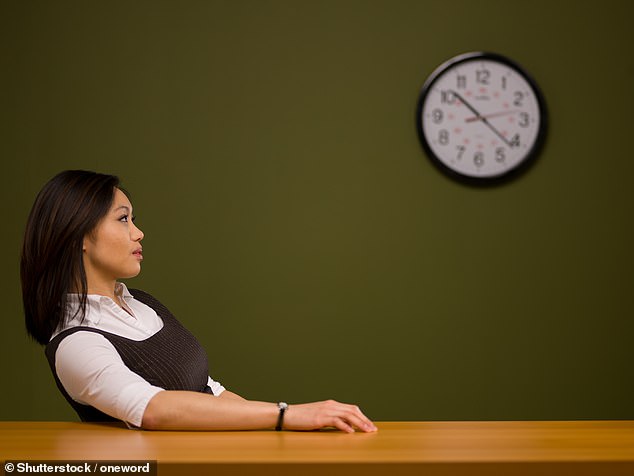 The researchers found that greater activity of the sympathetic nervous system (SNS) – i.e. increased heart rate and increased electricity conductance – had a ‘small, but significant’ effect on the feeling of time passing more quickly (stock image)

‘Fight or flight’ is oversimplified

Dr Curtis Reisinger, a clinical psychologist at Zucker Hillside Hospital, told New York Magazine the ‘fight or flight’ response to stress is oversimplified, and that there are other ways that humans have evolved to adapt to stress.

The six responses to stress include:

Choosing to sleep in a time of danger seems counter-intuitive but, Dr Reisinger said, stress quickly uses up energy.

When someone faces many mental or physical tasks, he said, they use up glucose in the brain.

The brain requires large amounts of energy, and taking a nap in response to stressful situations is a way for the body to replenish low levels of glucose in the brain.

However, this type of response to stress is usually seen in children and babies.

Dr Reisinger says that children have limited stress-relief resources, and as such they use sleep a way of managing stress.

With restored energy levels, people are more able to manage their stress and put their challenges into perspective – and the same concept applies to eating candy in response to stress.

Lead author of the study, Dr Ruth Ogden, from Liverpool John Moores University, said: ‘The results show, for the first time that increases in SNS activity can significantly speed up our subjective experience of time – being aroused really does make time pass more quickly.

‘When an individual experiences a significant increase in heart rate or skin conductance this can make time seem like it is passing up to 10 per cent faster.’

While this is a relatively small effect, it may be due to the participants having quite ‘normal’ days.

If they’d had been experiencing more highs and lows it’s likely the effect would have been greater, and there is thought to be an evolutionary benefit behind this, she explained.

‘The work I have done in the lab using electric shocks and other aversive stimuli has shown much larger effects of SNS activity on time experience,’ said Dr Ogden, whose findings are published in the journal Nature: Scientific Reports.

‘When we think about why humans would experience distortions to time, one idea is that there is some sort of evolutionary benefit to having a flexible timing system – think back to being a cave man, having “extra time” may have provided some survival advantage.

‘Assuming this evolutionary survival account is correct then it wouldn’t make sense to have a timing system that waxed and waned with every small change in arousal.

‘Instead it would need to be a system which reacted to large changes – fight or flight.

‘In our study, participants were mainly students going about their normal daily lives – there really weren’t that many life or death situations and maybe this limited the role of arousal in time experience.

‘We are testing this idea at the moment using a VR environment in which participants are exposed to significant virtual threat.’

The sense that time is passing quicker or slower than it really is can have significant effects on people’s wellbeing, the researchers said.

Feeling as though we do not have enough time is linked to ‘lower life satisfaction, poorer health outcomes, and risky decision-making’, they said, while for medical patients and the elderly, ‘distortions to time are associated with distress, symptom exacerbation and impaired social interaction’.

HOW CAN YOU CALM YOUR NERVES?

Whether it’s the thought of giving a presentation at an important office meeting or getting frustrated sat in a queue of traffic, stress has become an unwelcome part of every day life.

A simple breathing technique could help calm the nerves in seconds – by ‘fooling’ the body into thinking it is relaxed.

A YouTube video called ‘Mind Hack: Combat Anxiety with This Breathing Technique,’ explains how people can calm themselves down simply with a few inhales and exhales.

In it, Jane McGonigal, best-selling author of SuperBetter and video game designer, describes how the ‘power breath’ can help people to achieve a relaxed state similar to sleep.

While the benefits of deep breaths in have been widely reported, she argues the ultimate trick is not so much how you breathe in but also how you breathe out that counts.

The method has one simple rule – exhale for double the amount of time you inhale.

Put simply, if you breathe in and count to four seconds, you should then slowly exhale and count to eight seconds as you do it.

This triggers a change in the nervous system from ‘sympathetic’ mode – which is what we associate with fight or flight – to ‘parasympathetic’ – or ‘rest and digest’ mode.

If someone is particularly stressed or anxious worked up, she suggests they inhale for two and out for four.

Then gradually increase this to inhaling for eight seconds and exhale for 16 seconds after a bit of practice.