Britain’s public finances will face ‘enormous strains’ in the wake of the third national lockdown, the Chancellor has warned.

Ahead of Wednesday’s Budget announcement, Chancellor Rishi Sunak said a bill for the Government’s £280bn investment in coronavirus support will eventually have to be paid, with low interest rates leaving the nation’s finances ‘exposed’.

Mr Sunak said: ‘We now have far more debt than we used to and because interest rates… at least a month or two ago were exceptionally low, that means we remain exposed to changes in those rates.

‘That’s why I talk about levelling with people about the public finances and our plans to address them.’

While Mr Sunak did not reveal any details on specific tax measures, the Budget is expected to include a swathe of actions aimed at kickstarting the nation’s economy as lockdown eases over the coming months.

It is anticipated that the Chancellor will say in the Budget that ‘we have to be honest about the decisions we face as a country’, and that such decisions must be ‘underpinned by fairness’.

It comes after data revealed by the Office for National Statistics (ONS) earlier this month showed that £316.4billion has been added to the UK’s debt mountain since the onset of the pandemic.

It means overall state debt has now hit another record high, as it continues to climb above £2.1trillion.

Britain’s public finances will face ‘enormous strains’ in the wake of the third national lockdown, Chancellor Rishi Sunak has warned

It comes after data revealed by the Office for National Statistics (ONS) earlier this month showed that £316.4billion has been added to the UK’s debt mountain since the onset of the pandemic

These include a £126 million boost for traineeships and a mortgage guarantee scheme aimed at helping aspiring homeowners with small deposits onto the property ladder.

Speaking to the Financial Times: Mr Sunak added that while there is a challenge facing the nation’s economy, he believes the Budget will be a much-needed boon for those hit hardest by the pandemic.

He said: ‘I stood up at the beginning of this [coronavirus] thing and said I will do whatever it takes to protect the British people through this crisis and I remain committed to that.

‘We went big, we went early, but there is more to come and there will be more to come in the Budget. But there is a challenge [in the public finances] and I want to level with people about the challenge. 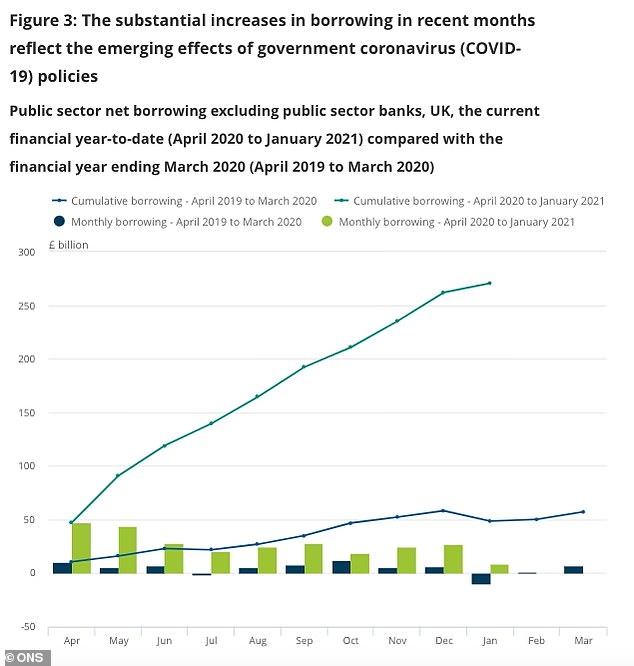 ‘Some 750,000 people have lost their jobs and I want to make sure we provide those people with hope and opportunity. Next week’s Budget will do that.’

The Chancellor’s comments came as Conservative MP John Stevenson warned Mr Sunak that now is not the time to start winding up measures supporting people and businesses through the pandemic.

Five per cent deposits for first time buyers: Rishi Sunak to guarantee mortgages with government loans in next week’s budget

A mortgage guarantee scheme to help thousands of young people onto the property ladder with small deposits is set to feature in next week’s Budget.

Chancellor Rishi Sunak plans to incentivise lenders to provide mortgages to first time buyers, and current homeowners, with just 5 per cent deposits to buy properties worth up to £600,000.

He will detail on Wednesday how the Government will offer lenders the guarantee they require to provide mortgages covering the remaining 95 per cent.

Prime Minister Boris Johnson has said he wants to turn young people from ‘generation rent to generation buy’ and end the atmosphere of exclusion many millennials and Generation Zs have had with the property market.

The Carlisle MP, who is a member of the Northern Research Group, told BBC Radio 4’s Today programme: ‘There are two key things we want to see: continuing support for the economy, for families for business, through many of the policies that the Chancellor has already enacted.

‘We’re not through the pandemic yet, we’ve still got a few months to go, so we want to see continuing support and we’ll probably have a much better idea of where the economy is come the autumn.

‘As soon as we can get back to that levelling-up agenda which we were all elected on in 2019, we believe that in the north we have a major contribution to make to the recovery.’

Among the measures he wants extended is the £20 weekly uplift to Universal Credit, but he also said it is ‘too early’ for tax rises, adding: ‘The way out of this is to actually grow the economy.’

Mr Sunak previously hinted that tax rises earlier this month following the release by the ONS of the national debt figures.

He said  ‘it’s right that once our economy begins to recover, we should look to return the public finances to a more sustainable footing’.

Overall public sector net borrowing in the first 10 months of the financial year is estimated to have been just over £270billion.

That is £222billion more than was borrowed in the preceding financial year.

It is the highest public sector borrowing in any April to January period since records began in 1993.

Public sector net debt has risen by £316.4 billion over the 10 months since the start of April, at the onset of the coronavirus pandemic.

The ONS said the state debt had therefore increased to £2,114.6billion at the end of January.

That is approximately 98 per cent of gross domestic product – a debt level not seen since the early 1960s. 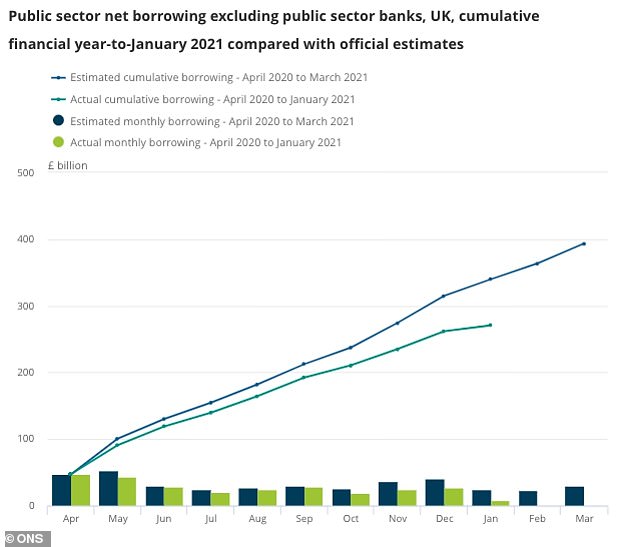 The Office for Budget Responsibility (OBR) has said it expects the public sector might borrow as much as £393.5 billion by the end of the financial year in March