The Champions League group stages came to a close with a nail-biting finish to see who would progress into the last-16 of the competition.

Bayern Munich maintained a perfect record in the group stages for a second consecutive season with a 2-0 win over Inter Milan.

Benfica topped their group over French giants Paris Saint-Germain thanks to a 6-1 win over Maccabi Haifa while all the rest of the places in the next round were ratified.

Manchester City, Liverpool, Tottenham and Chelsea all finished the group stages with victories to seal their progress into the knockout stages.

With some starring performances across Europe this week, who makes Sportsmail’s Team of the Week? 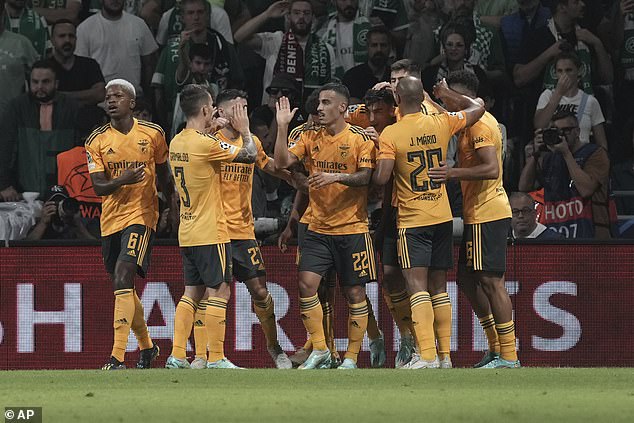 AC Milan may have sealed a comfortable 4-0 victory over Red Bull Salzburg to qualify for the knockout stages, but goalkeeper Ciprian Tatarusanu still had a huge part to play.

The 36-year-old Romanian shot-stopper, who has stepped in for the injured Mike Maignan, showed his worth once again by keeping a clean sheet to help Milan progress.

The second-choice goalkeeper had to be on his toes with Salzburg having 16 shots, one more than Milan, albeit only six on target to Milan’s seven.

Tatarusanu was busy and pulled off vital saves. He is making things tough to see a way back into the line-up for Maignan with that type of performance. 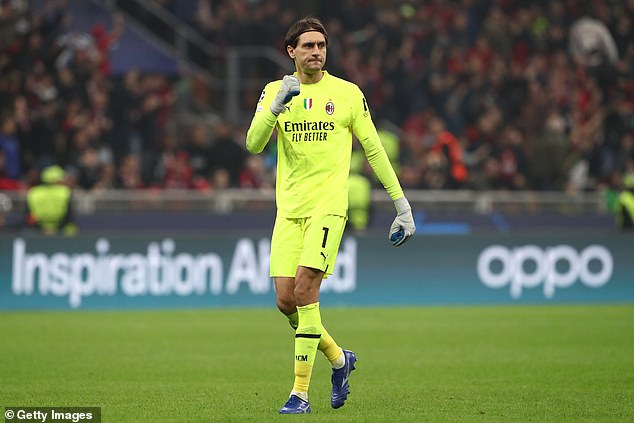 A surprise inclusion in the Manchester City line-up, let alone the Champions League team of the week, but he earned his way in with a record-breaking display.

The youngster made history as he notched on his senior debut for Pep Guardiola’s side in their 3-1 comeback victory over Sevilla.

The 17-year-old slammed in an equaliser having latched onto a through ball from Julian Alvarez after their Spanish opponents opened the scoring early on.

Lewis’ goal (at 17 years and 346 days) saw him become the second youngest English player to score a goal in the Champions League, just behind Borussia Dortmund sensation Jude Bellingham (17 years and 289 days). 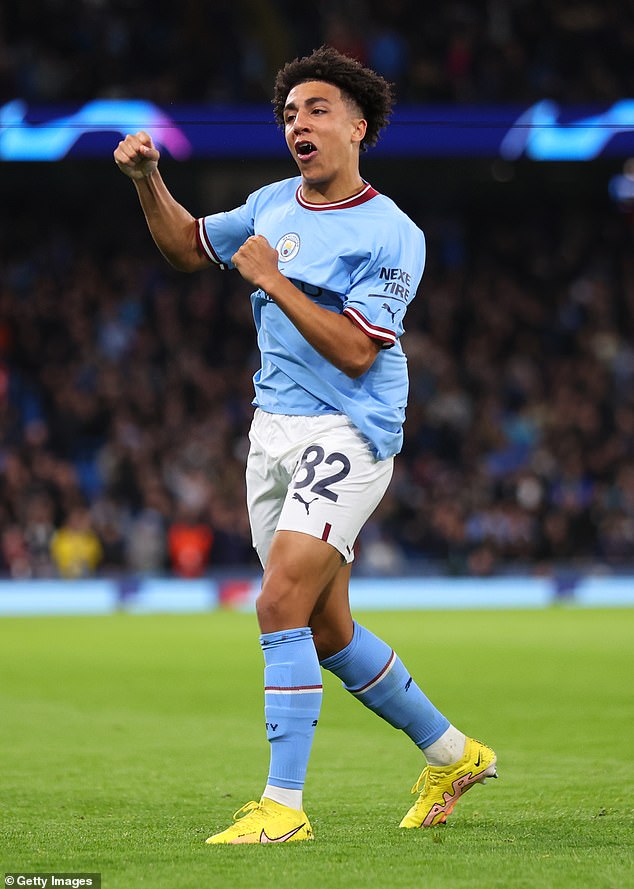 A goal and a clean sheet sums up a perfect night for a centre back – that is not far wrong for Bayern Munich’s Benjamin Pavard.

The 26-year-old Frenchman found the back of the net in the 32nd minute of the match against Inter as he headed the ball down into the ground to bounce the ball past Andre Onana from a Joshua Kimmich corner.

Pavard’s goal helped Bayern seal a 2-0 victory over Inter to complete a perfect record of six wins from six in the Champions League group stages.

The 2018 World Cup winner celebrated his second goal of the season with a knee slide before slowly dabbing. 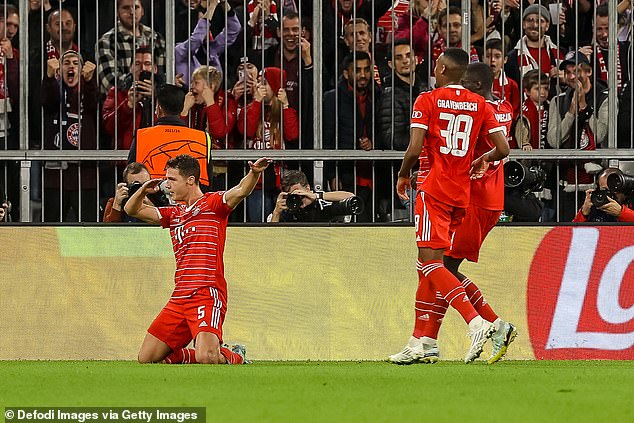 Ibrahima Konate has arguably showed Liverpool what they are missing as he returned to the line-up with a rock solid performance.

The Reds have looked vulnerable at the back at stages this season, but the return of the 23-year-old helped keep in-form Napoli at bay in the Champions League, as Liverpool sealed a 2-0 win to finish the group stages on a high.

The Frenchman showed composure, pace and a physical presence to inflict Napoli’s first defeat of the competition.

Konate alongside Virgil Van Dijk in defence felt more like a Liverpool of old as they kept a dangerous attacking line-up, including Victor Osimhen, out to keep a much-needed clean sheet. 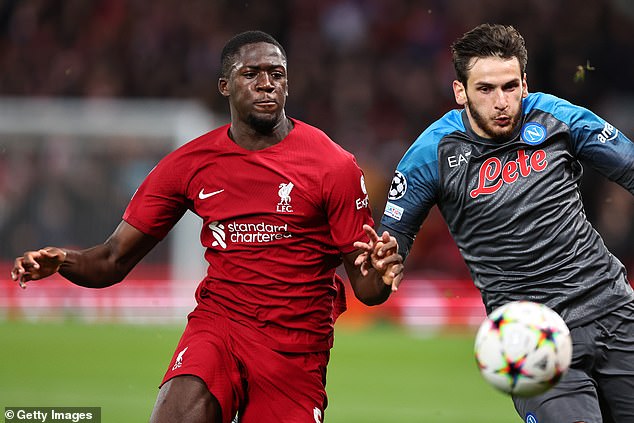 Benfica were probably not even expected to progress with PSG and Juventus both in their group, but they’ve ended the first stage as Group H victors thanks to a huge 6-1 victory over Maccabi Haifa.

You could say most of the Benfica team deserve a place in the team of the week with a superb display and the goals being spread around the team.

Left back Alejandro Grimaldo is the one that squeezed into the line-up, though, having converted a free-kick in the 69th minute of the match.

The Spaniard did more than just score as he had six tackles, three interceptions, two blocks, 106 touches, a 94 per cent passing accuracy, two key passes, 15 ball recoveries while winning eight of his 12 duels, according to Who Scored. 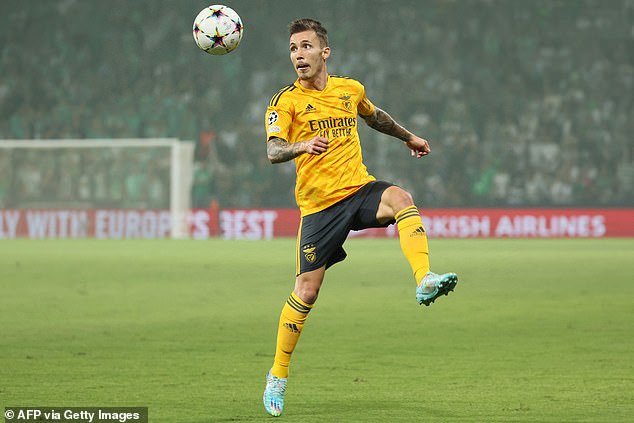 It was yet another man of the match performance for Federico Valverde as he helped Real Madrid complete a 5-1 demolition job on Celtic.

The 24-year-old’s goal was the pick of the bunch for the reigning champions in the match, taking his tally up to eight for the season.

The Uruguayan used the inside of his right foot to guide a shot from 18 yards out across the face of goal and inside the far post to round off Madrid’s goals.

Valverde is flourishing into one of the top central midfielders in the world with his current form and another superb display in the Champions League has only proved that further. 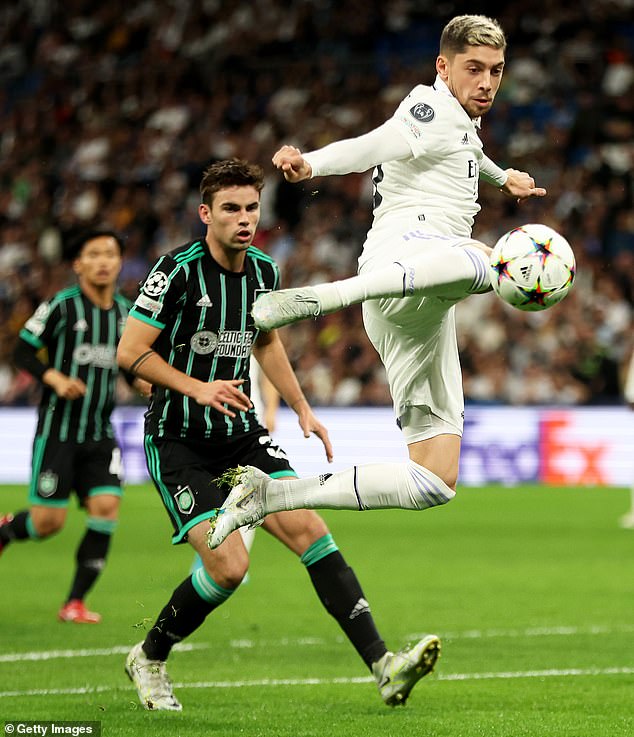 It was a night to remember for Christopher Nkunku, easily one of Europe’s rising stars, as he became RB Leipzig’s all-time top Champions League goalscorer.

The 24-year-old took his Champions League tally to 11 goals after scoring in their 4-0 win over Shakhtar Donetsk, moving him one goal clear of team-mate Emil Forsberg in Europe’s elite competition.

Three of those have come in the Champions League this season, taking his tally up to 14 goals in all competitions.

He clearly enjoyed breaking the record as he celebrated his goal in a bizarre fashion by running to the corner flag and pulling out a balloon from his sock before proceeding to inflate it. 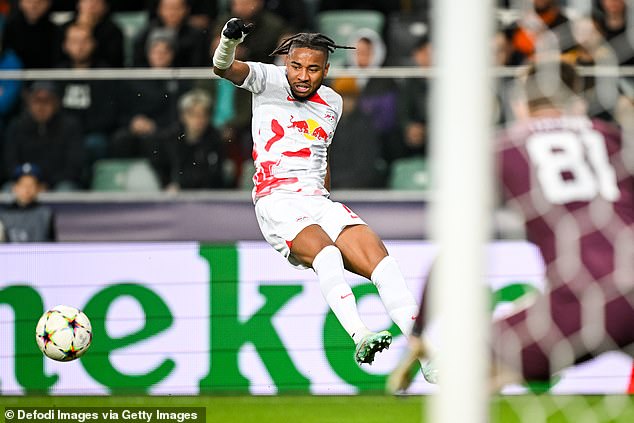 An impressive debut for Denis Zakaria, winning plenty of tackles and being reliable at both ends of the pitch for Chelsea in their 2-1 win over Dinamo Zagreb.

The on-loan midfielder not only put in a shift but also found the back of the net for the Blues after patiently waiting to make his debut under Graham Potter.

His goal proved to be the match-winner just after the half-hour mark. Unfortunately for Potter and Chelsea the Switzerland international limped off injured.

Zakaria, who joined on loan on deadline day from Serie A giants Juventus, was replaced by Ruben Loftus-Cheek in the 72nd minute to end his terrific debut on a slightly sour note. 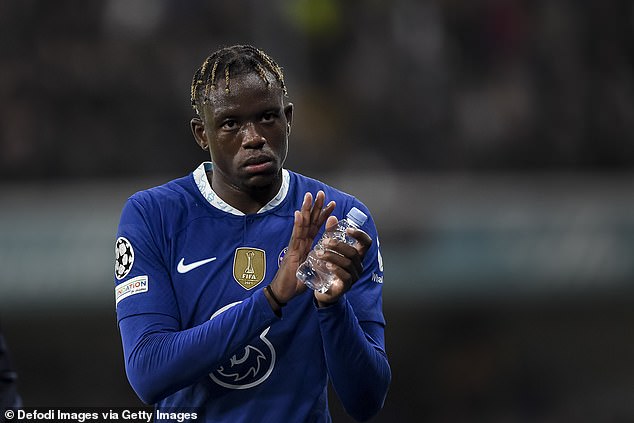 The former Arsenal and Chelsea striker is still shining on the main stage at age 36 with a brace and an assist in AC Milan’s 4-0 victory over Red Bull Salzburg to ensure their progress to the last-16.

The Frenchman headed in an early opener before setting up team-mate Rade Krunic to score their second.

Giroud then drilled in a second to stretch the lead to 3-0 to make him the oldest player to score a brace in the Champions League for Milan since Filippo Inzaghi (37 years and 86 days) back in 2010.

A stoppage-time goal from Junior Messias capped off an impressive night for Stefano Pioli’s side, although most of the praise and headlines were stolen by veteran striker Giroud. 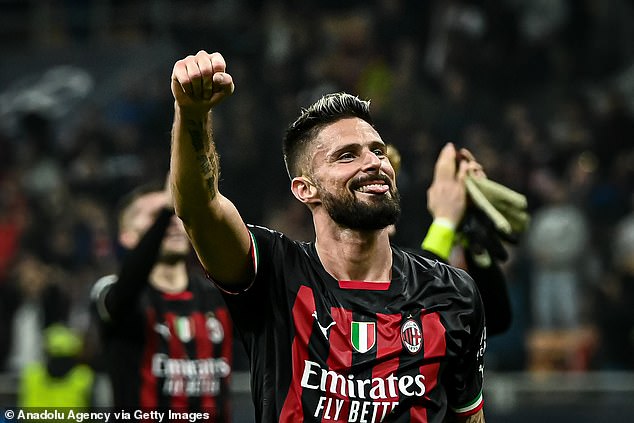 Ferran Torres netted twice for Barcelona as they ended their miserable Champions League campaign with a comfortable 4-2 victory at Viktoria Plzen.

The Spain international made it 2-0 – adding to a Marcos Alonso opener – just before half-time as he calmly slotted the ball into the net for a goal initially ruled out before VAR intervened.

The former Manchester City forward grabbed his second of the match in the 54th minute as Barcelona caught their opponents on the break.

It was not just his goals that made a difference for Xavi’s side, but the fact that he was a constant menace throughout the match. 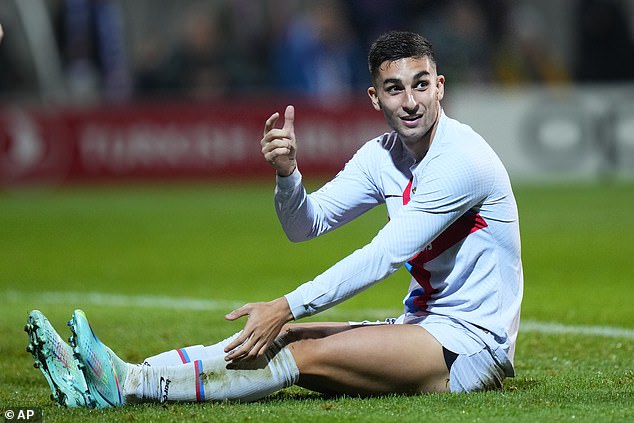 Tasked with again filling in for the prolific Erling Haaland, Julian Alvarez had big shoes to fill for Manchester City against Sevilla.

The Argentine didn’t disappoint as he notched a goal and added two assists in City’s 3-1 victory over the Spanish side to finish top of their group.

Alvarez teed up 17-year-old Lewis with an inch-perfect pass to draw City back into the game at 1-1.

The Argentinian then found the back of the net himself, rounding Sevilla goalkeeper, Bono, to give Guardiola’s side the lead, before linking up with Riyad Mahrez, who sealed the 3-1 win for the Citizens.

Took his chance, without a doubt. 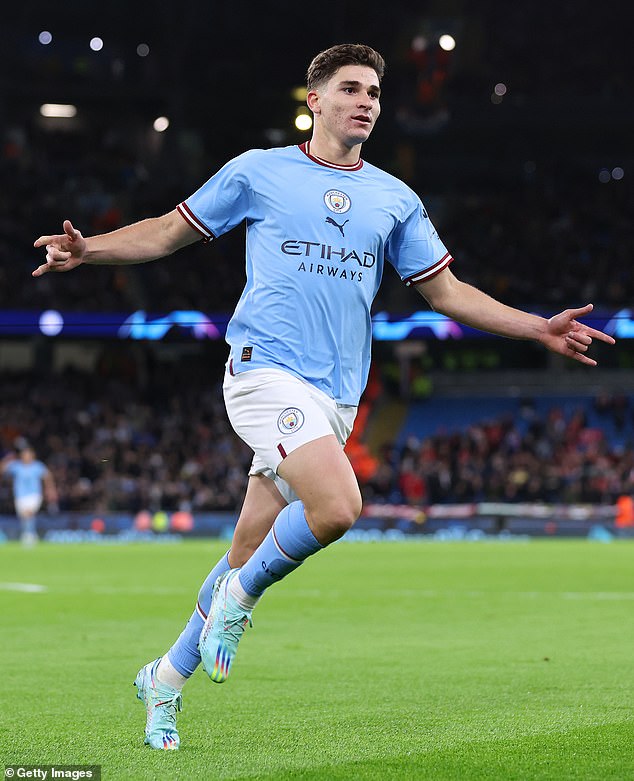 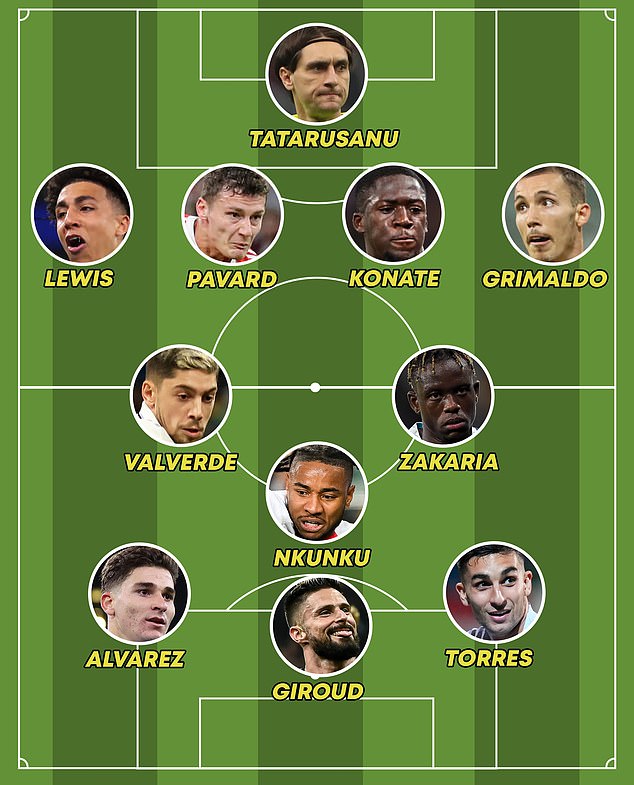