After five years out of the ring Celtic had forgotten how savage, how brutal, the Champions League could be.

Before their first game at this level since a home defeat to Anderlecht in December 2017 Scotland’s champions dared to believe. The first Australian coach to manage at this level, Ange Postecoglou urged his team to play without fear and go down swinging. For close to an hour, they took him at his word.

Against the undisputed heavyweight champions of Europe, risk and reward is always a dangerous strategy. Throwing punch after punch, the Parkhead side struck the woodwork and tested Thibaut Courtois but failed to land a knockout blow. Two devastating counter punches inside four minutes from Vinicius Junior and the evergreen Luka Modric put Celtic on the canvas, their resistence spent. 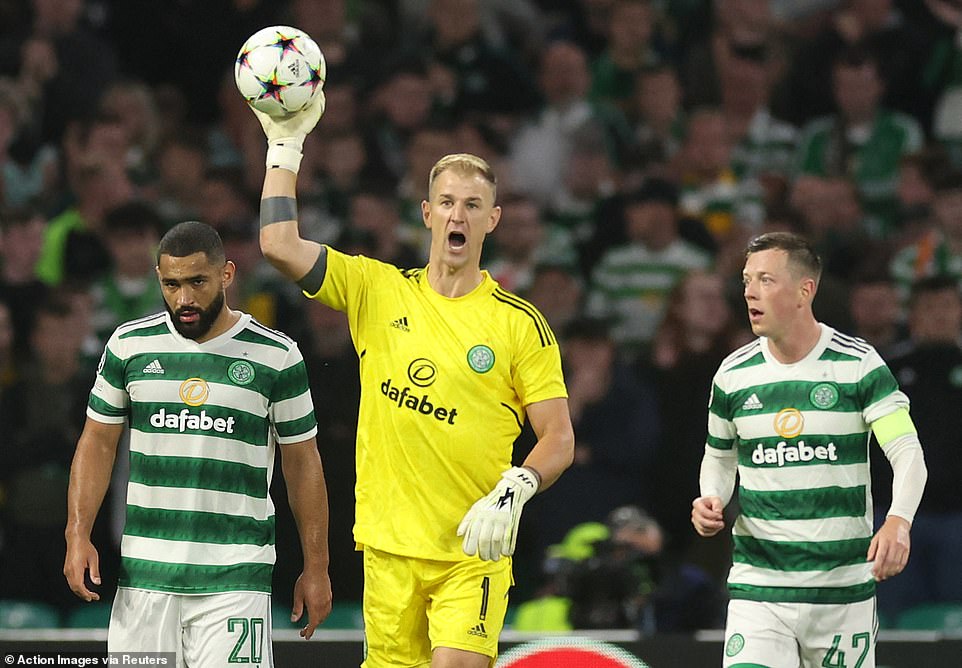 Eden Hazard’s close range finish 13 minutes from time couldn’t be said to flatter Carlo Ancelotti’s side exactly. In the final half hour they were clinical in a way Celtic never were. At this level a ruthless streak is not only desirable; it’s essential.

There was talk before this of the old fox Ancelotti resting a few of his names. Indulging in a bit of squad rotation before the *real* games kick in. In a show of respect for the Celtic Park experience the most successful manager in Champions League manager pretty much went with the starting eleven which beat Liverpool in last season’s final.

With Casemiro a Manchester United player these days Aurelien Tchouameni, a £72million signing from Monaco, was the only change from the starting eleven in Paris.

Through necessity Celtic had to make a change or two to the side who ripped arch rivals Rangers to shreds in a 4-0 weekend rout. The loss of a top scorer is never a good thing, but Celtic didn’t start this game like a team nursing an acute case of self pity. In the opening half hour they played some outstanding football.

Real Madrid’s last visit to Glasgow was May 2002 when a moment of magic from Zinedine Zidane sunk Bayer Leverkusen to win the Champions League. They knew they were in for a night of it here after 27 seconds.

With five goals in his last two games Celtic’s Israeli winger Liel Abada is proving a decent finisher. When the Portugese winger Jota flicked the ball into his path in the first attack of the match, then, you expected the net to bulge.

He scorned an even better chance after 13 minutes. Once again Jota’s quick thinking and inteligence was the catalyst, the summer signing from Benfica playing a sweeping first time pass into Abada’s path behind an absentee back line. With only Courtois to beat the 20-year-old’s finish was tame. A glorious chance was gone.

You wondered how many Celtic would get. A feature of their play in the SPFL is blowing teams away in the first half and they had almost as many opportunities against Real Madrid as they get against Ross County.

Courtois palmed a corner out to then Japnanese midfielder and felt the burn when the ball came fizzing straight back at him from 20 yards.

Playing with a freedom and invention which surprised and delighted their own supporters in equal measure the upright must still be shaking from the thudding 18 yard strike from captain Callum McGregor which came to within inches of the lead.

The scent of blood in their nostrils the gutteral roar of the home support filled the Glasgow sky. Taken apart by PSG in a five goal home thrashing under Brendan Rodgers this was a more enjoyable experience. So far. The only downer was the absence of the goal they deserved.

The measure of Real’s discomfort came after 25 minutes when Austrian defender David Alaba passed the ball off the pitch with no one near him. The sight of Ballon D’Or Karim Benzema winner limping gingerly, trying to work off an injury, added another decibel to the relentless din.

Seconds after Federico Valverde flashed Real’s first real chance of the night past the left hand post the board went up to signal the talismanic goalscorer’s departure. In a show of respect – and no doubt relief – Celtic supporters applauded Benzema from the pitch. Any encouragement they took took from his departure was hard to sustain when Eden Hazard trotted on instead.

The Belgian’s first consequential pass of the night was almost an assist for a goal. Celtic’s first casual play of the half created the first real chance for Real before half-time. It came from one moment of quick thinking from Hazard, an instant reminder of the damage the great teams can do. As Celtic appealed for an offside the Brazilian-born winger Vinicius Junior – now a naturalised Spaniard – sprinted unheeded down the left flank with a clear run on goal.

There was always the expectation that Joe Hart – Celtic’s old stager – would see a bit of action. No one thought it would take 42 minutes to arrive. Parkhead held its breath as Vinicius Junior despatched an angled strike towards goal, the former England number one producing a huge stop at a critical juncture.

At half-time you wondered if Celtic had shot their bolt. After a half which could have been so much better Abada left the pitch to be replaced by Daizen Maeda, another of Postecoglou’s astute Japanese imports. The substitute had the chance to make an instant impact when a driven Juranovic cross landed at his unmarked feet in the area. Surprised by the chance he failed to get enough on it and Courtois fell gratefully on another missed chance.

After 57 minutes Celtic Park finally fell silent. A Real Madrid goal of brilliant implicity came from precious little. Hazard seemed to control the ball on the halfway line with his upper arm before laying the ball into the path of Federico Valverde. A beautifully weighted low ball across the face of goal picked out Vinicius Junior arriving at the back post and this time the winger passed the ball low into the corner of the net.

The slayer of Scotland in the Euro 2020 finals Luka Modric will be banned from Glasgow at this rate. Another clinical counter attack saw the little Croatian maestro curl a sublime finish into the net with the outside of his foot beyond the outstretched hand of Hart for 2-0

The third goal felt cruel on Celtic, Dani Carvajal laying a crossfield ball into the path of Hazard for a simple finish.

Follow Sportsmail’s live blog as we take you through tonight’s Champions League group stage clashes, including Celtic vs Real Madrid and PSG vs Juventus.