Hundreds of workers in hi-vis vests gathered outside the union’s head office in Melbourne on Monday to protest against mandatory Covid-19 vaccine requirements, which come into effect for the construction industry later this week.

The protest turned violent as demonstrators clashed with Mr Setka and other union officials, hurling abuse and projectiles and smashing glass windows.

Mr Setka is furious 300,000 construction staff state-wide have lost work because of the actions of ‘fake tradies’ at the protest, describing them as ‘scum of the earth, drunken and un-Australian morons’.

It comes as Victoria recorded 603 new cases on Tuesday, the highest daily tally in the current outbreak and since August 2020, bringing the number of active cases to 6000.

A protest turned violent outside CFMEU headquarters in Melbourne, prompting the state government to shut down the entire  industry

‘There were a few of anti-vaxxer activists there who are not union members or are from our industry, they’re the ones you see at all the protests,’ Mr Setka told the Today show on Tuesday.

‘It just got out of control. Then they were consuming a whole heap of alcohol. Thanks to these morons, 300,000 Victorians are sitting at home for at least the next couple of weeks, could drag out even longer.’

Mr Setka described how he went out to address the hostile crowd but eventually forced to retreat back inside as protestors turned on him.

‘We went out there to  see what it was all about,’ he said.

‘There was a sprinkling of construction workers there of our members and the rest were just people, I wouldn’t even know who they are.

‘You couldn’t even talk. We tried to keep it all calm, and it just got out of chrome. People started throwing bottles. Some of them were fighting amongst themselves.

‘You know, once they started throwing the bottles, that was it we just said this is too dangerous, let’s move back in. It just got out of control from there.’ 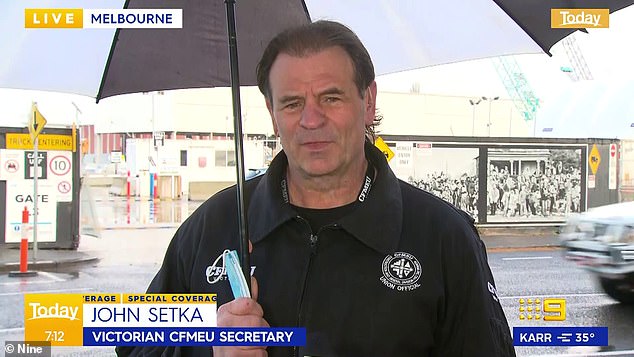 Mr Setka said he was blindsided by the state government’s snap decision to shut down the construction industry statewide.

‘It wasn’t like there was full-on consultation us with,’ he said.

He doesn’t believe the shutdown was payback for recent criticism of the state government’s public health orders and agreed it had no other choice but to shut down the industry.

‘I don’t think they had much of an alternative but to do what they’ve done,’ Mr Setka said.

‘It’s unfortunate, because families rely on a pay packet every week, and the problem with it is, I think it’s going to go longer than two weeks.

‘They can thank all the drunk morons yesterday. This lays squarely on their shoulders.’ 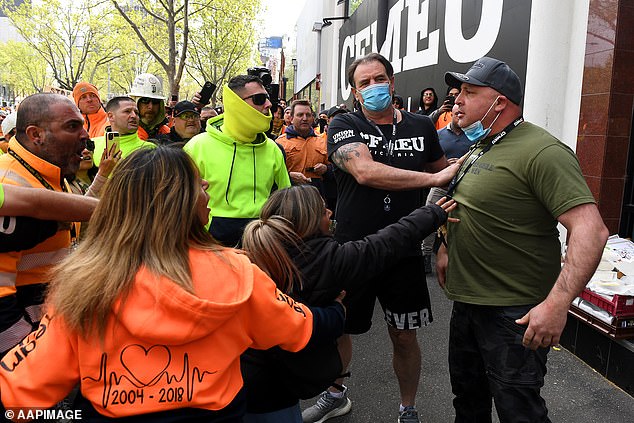 ‘Some of those people in the crowd were construction workers, but others, I’m reliably informed, were fake tradies,’ he said.

‘They’d been down to the Reject Shop and got themselves a $2 hi-viz hoodie so they could pretend they were construction.’

On Monday night, the state government shut down the industry for two weeks in metropolitan Melbourne, City of Ballarat, City of Greater Geelong, Surf Coast Shire and Mitchell Shire.

All worksites will need to demonstrate compliance with health directions prior to reopening.

This includes a requirement for workers to show evidence of having had at least one dose of a vaccine before they return to work on October 5. 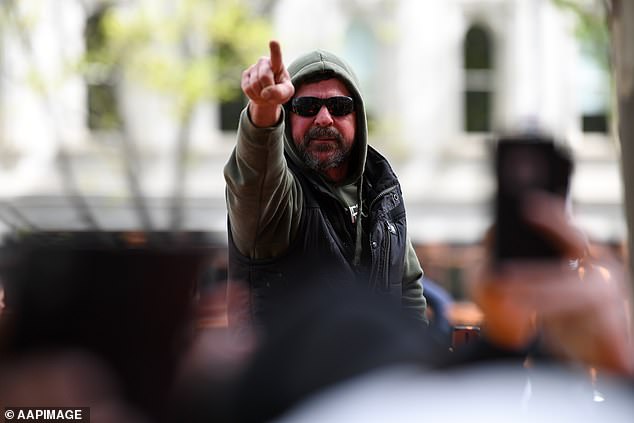 Mr Shorten defended the CFMEU saying the construction union was being responsible and encouraging people to get vaccinated.

‘There is a network of hard-right man-baby Nazis, just people who just want to cause trouble – these man-babies, they want to complain about vaccinations,’ he said.

‘They deserve to get the full force of everything that’s coming their way.’

It’s believed the protesters plan to gather again outside the CFMEU from 10am on Tuesday.

The Victorian branch of CFMEU said it had always supported freedom of choice regarding vaccination.

‘We are not going to be intimidated by outside extremists attempting to intimidate the union, by spreading misinformation and lies about the union’s position,’ it said in a statement on Monday.

The Victorian government said the shutdown was required to cut down movement, reduce Covid-19 transmission and give the industry time to adapt to tnew requirements.

An audit of about 200 construction sites on Thursday last week found 73 per cent were failing to comply with health directions.

‘We put the industry on notice just a week ago, we have seen appalling behaviour on-site and on our streets, and now we’re acting decisively and without hesitation,’ Victorian treasurer Tim Pallas said. 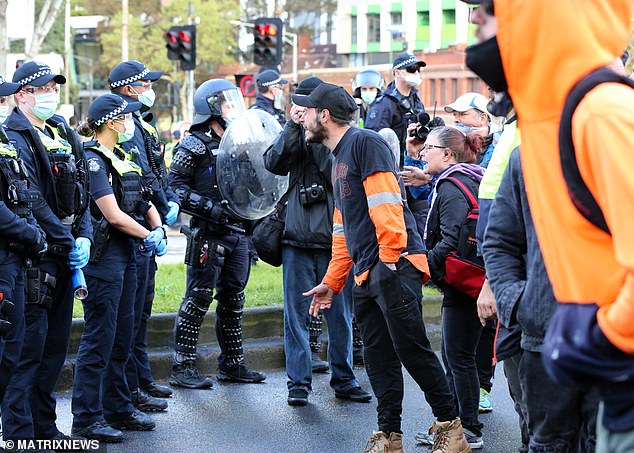 An amnesty will be in place on Monday so that a limited number of workers can attend construction sites to shut them down safely.

‘Please calm down. Can you at least give me the respect to talk? We’re not the enemy, I don’t know what you have heard,’ he told protesters.

‘I have never, ever said I support mandatory vaccination.’

Once Mr Setka went back inside, the protesters smashed a glass door to the building.

Some said they would come to the CFMEU office every day until the union bows to their demands.

It comes as Victoria on Monday recorded the highest number of daily COVID-19 cases in the current outbreak, with 567 new locally-acquired cases and one death – a Moreland woman in her 70s.