The chief executive of a charity linked to Prince Harry has been issued with a final warning over his behaviour while ‘under the influence of alcohol’, it has been reported.

Richard Sharp, 37, who served more than eight years as a royal marine before becoming CEO of Team Rubicon in 2017, has left the charity in hot water after he was handed a written warning over his ‘verbally abusive’ behaviour’ at a five-day event in the U.S last year.

The chief was allegedly ‘under the influence of alcohol’ when he became aggressive with volunteers at the leadership event, an internal inquiry seen by The Times reported.

The international organisation, which was founded in 2010 by U.S Marines William McNulty and Jacob Wood, is a disaster response charity which uses the skills and experience of military veterans to help disaster victims across the world.

Chief executive of Team Rubicon Richard Sharp, 37,  was handed a written warning over his ‘verbally abusive’ behaviour’ at a five-day event in the U.S last year

Witnesses claimed that the CEO directed insults such as ‘ungrateful pr**k’ and ‘snowflake’ towards a female volunteer and said ‘are you telling me I can’t say c***’ when he was later questioned over his behaviour.

Mr Sharp, who reportedly earns more than £90,000 per year, also allegedly engaged in wrestling during the event at YMCA’s Estes Park in Colorado.

During the inquiry, a panel heard that members of Team Rubicon USA had ordered ‘thousands and thousands’ of beers using the charity’s finances.

Following the allegations, Mr Sharp this week admitted to staff that he had been ‘very, very drunk’ and had ‘dropped the C-bomb and expletives’, in a video message.

According to The Times he said: ‘My behaviour was unacceptable and [was] a learning moment for me’.

The allegations have now left the charity, which sees its volunteers help hundreds of people across the globe and mobilises veterans in order to each isolated communities, in crisis.

According to Team Rubicon’s website, prior to joining the charity Mr Sharp began his career as a semi-professional rugby player. 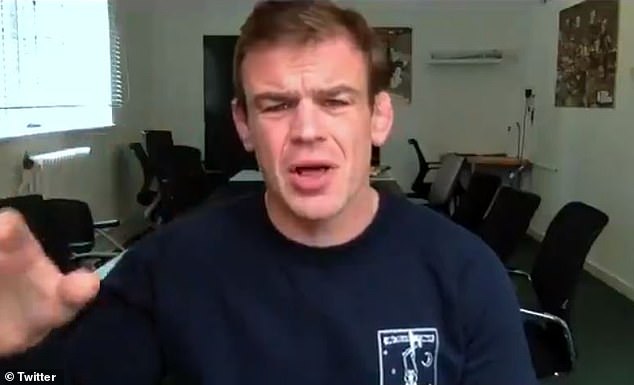 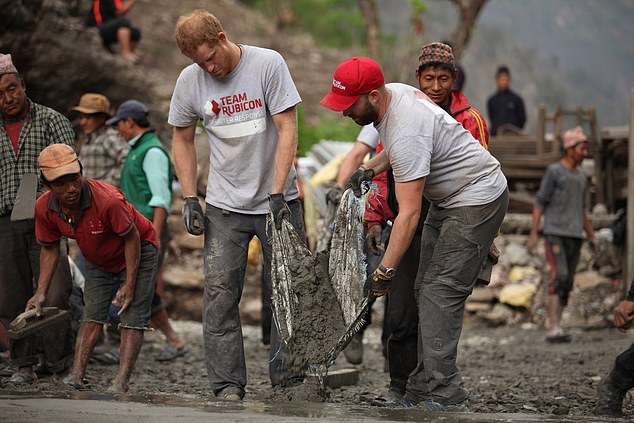 He has also worked with the investment banking company Deutsche Bank and the charity Help for Heroes.

The event last year has now been reported to the Charity Commission and the claims have also been lodged in a New York court.

A spokesman for Team Rubicon UK told The Times: ‘Mr Sharp is continuing in his role and has the full, unanimous confidence of the board of trustees who received an unsolicited letter of support and confidence in the CEO signed by every female member of staff to which they gave particular consideration.’

Following his official tour in Nepal in 2016, Prince Harry remained in the south Asian country to work with Team Rubicon UK on an earthquake relief project. 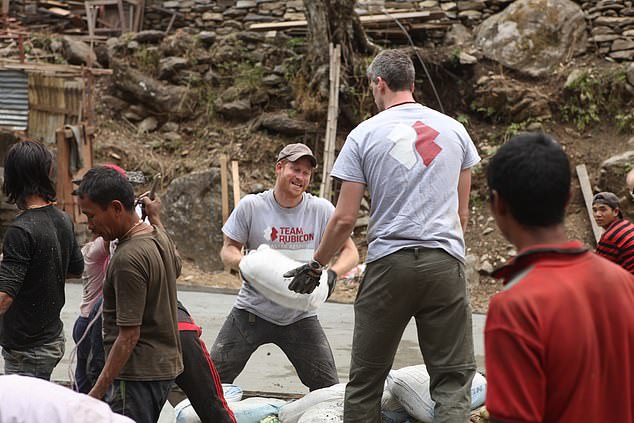 During his time in Nepal, the royal helped the charity with the reconstruction of a new school which was destroyed by the 7.8 magnitude earthquake in 2015

During his time with the organisation, the royal helped volunteers with the reconstruction of a new school which was destroyed by a 7.8 magnitude earthquake in April 2015.

Speaking at the UK Embassy at the end his official tour in Nepal, Prince Harry said at the time: ‘The people I have met and the beauty of this country make it very hard to leave.

‘Thankfully however, I’m not leaving just yet! I will be spending the next six days in a remote region with a charity called Team Rubicon. The team I’m joining will be working with the community to rebuild a school damaged in the earthquake.

‘I’m so grateful to have this opportunity at the end of my official tour to do my small bit to help.’