After 20 games on Spanish soil, Celtic have yet to win. They have probably never lost one in quite this fashion either.

While the eventual outcome of this Group G opener may not have been overly surprising, the manner in which it was arrived at most certainly was.

Bold, bullish and occasionally brilliant in the opening period, Ange Postecoglou’s side raced into a two-goal lead courtesy of Albian Ajeti and Josip Juranovic’s penalty. Remarkably, their lead might well have been even more handsome.

Celtic suffered heartbreak in Spain, losing out in a seven-goal thriller against Real Betis 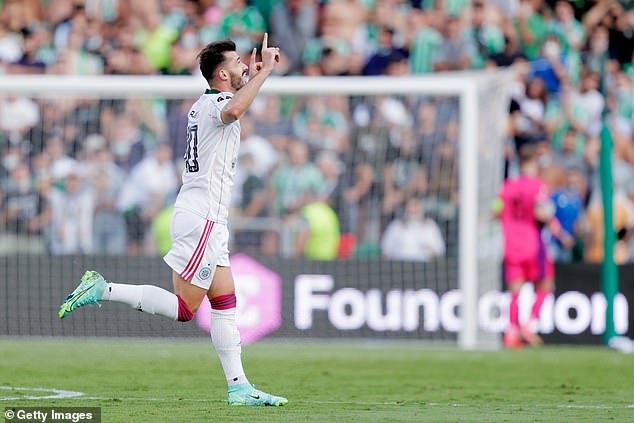 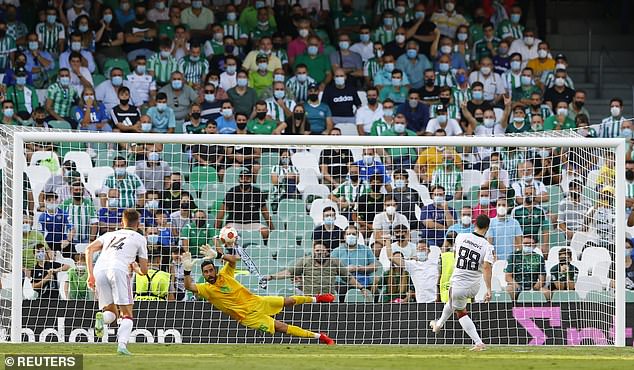 How quickly that early promise was washed away. By the break, Betis had restored parity then seemingly put the game beyond the Scots with a rapid-fire double at the start of the second period.

You had to hand it to the Australian’s side thereafter. Needing to climb the mountain again, they hung in there and claimed the seventh goal of an engrossing match through Anthony Ralston with three minutes remaining.

There was to be no bonus point at the end of it, though. The night ended with plentiful positives for Postecoglou to take from Seville in an attacking sense but more defensive headaches to nurse.

It was an occasion when modest expectations were raised only to be dashed. 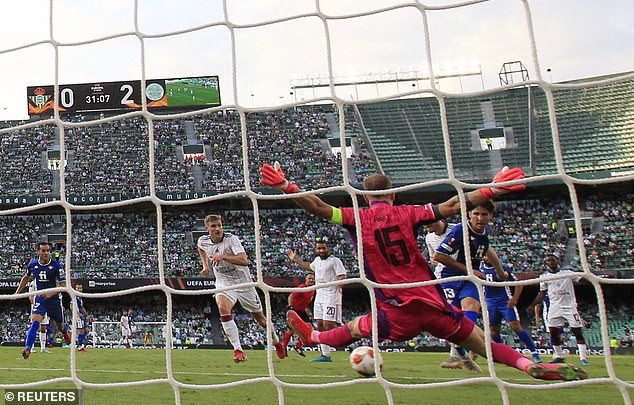 There was much for the Celtic manager to admire in the way his side went for the jugular from the off.

They stunned the hosts with their appetite, aggression and movement. The supply lines from middle to front were wide open.

With Adam Montgomery and Jota thriving in the wide areas, chances were created almost at will.

Man of the Match: Juanmi.

The much-maligned Ajeti scored one and earned the penalty which gave his side their second. Jota had set up the first and was menacing throughout.

How the Portuguese was left to regret a missed chance for a third when sent clear on goal. It felt like a big moment at the time and so it proved.

Ultimately, an unfamiliar Celtic side did not have the answers when Betis eventually got into their stride.

A defence which had started solidly did not respond well to concerted pressure. Each concession was cheap.

Watching in bars throughout this great city, the 1,000 or so visiting fans must have viewed the subsequent collapse with a nagging sense of familiarity.

Their side showed promise here but it was not sustained for long enough.

Postecoglou has undoubtedly made progress in his short time in Glasgow but this always had the look of a bridge too far.

Already without Kyogo Furuhashi and James Forrest, the Australian was denied the services of skipper Callum McGregor and Greg Taylor through injury plus Liel Abada and Nir Bitton due to the Israeli duo observing Yom Kippur.

It made for a makeshift side; Juranovic switched to left-back, Ismaila Soro holding, Montgomery making his first start of the season on the left and Ajeti the designated goal threat.

A vast largely uncovered arena on the south of Seville, the Estadio Benito Villamarin was little more than half full for this Group G opener but what a din the locals made throughout.

The first half was utterly relentless and engrossing – both sides going toe-to-toe, comical errors blending with some extraordinary sequences of play.

Postecoglou had promised Celtic would go for it and he wasn’t joking. Only Claudio Bravo in the Betis goal denied Jota an instant opener after Tom Rogic’s through ball.

Celtic’s willingness to press Betis at every turn seemed to startle the Spaniards.

Jota’s skill and pace soon left Juan Miranda in his wake. Ajeti bundled his cross over the line from five yards but the frantic protests of the Betis defenders curtailed Celtic’s celebrations. 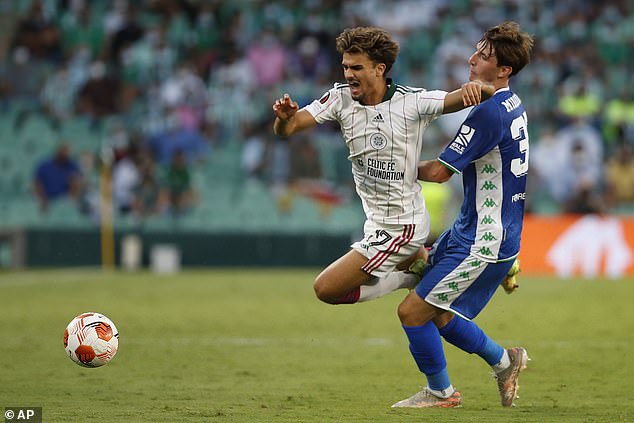 The two minute VAR check felt like it took an age but the decision stood.

Nabil Fekir and Andres Guardado both drew saves from Joe Hart yet Betis struggled to get into any rhythm.

Ajeti could have doubled his and Celtic’s advantage when sent clear by Soro. This time Bravo advanced and blocked.

Soro had been booked inside eight minutes for a late challenge on Fekir and was fortunate to stay on the park when he took out veteran Joachin as Betis countered.

If that decision was debatable, the same couldn’t be said for Croatian referee Fran Jovic’s next involvement.

With Ajeti sent clear on goal by David Turnbull, Bravo cleaned him out. Penalty. 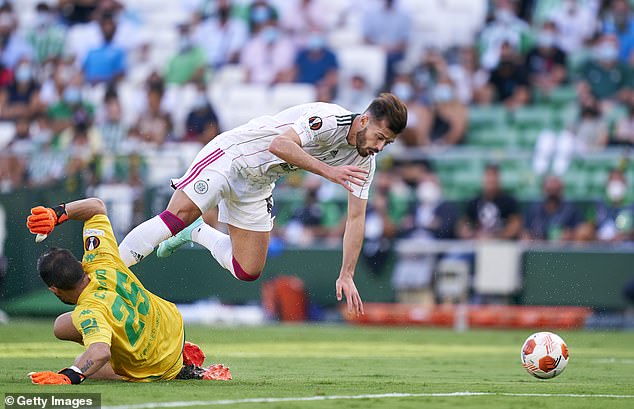 After another interminable VAR wait, Juranovic smashed the spot kick high to the keeper’s right. Celtic were in dreamland.

Incredibly, it might even have been better. Jota spurned a fine chance for a third when Bravo threw up an arm to repel his attempted chip. You sensed he might rue that.

Within a minute, skipper for the night Hart turned Miranda’s low strike away for a corner and the home fans roared their encouragement.

Sixty seconds later, Celtic were undone when Miranda enjoyed a generous break of the ball 15 yards out which put him in behind. He calmly planted his shot to Hart’s left from 10 yards.

It was now a question of Celtic’s nerve holding. It lasted scarcely three minutes.

With the defensive line ragged, Borja Iglesias sneaked in behind and made for the line. With the visitors nowhere in the shot, his square pass presented Juanmi with a tap-in from three yards. 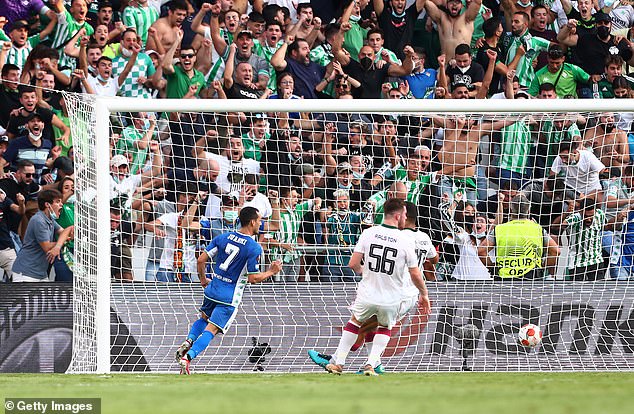 Only Cameron Carter-Vickers’ timely tackle on Joachin maintained parity at the break.

The chances of Betis starting the second half as sloppily as they had the first were somewhere between slim and zero.

It took them only five minutes to get their noses in front. With Ralston still tracking back, Soro was slow to close down Sergio Canales on the Betis left.

His cross had the requisite curl and pace for Iglesias to caress the ball into the far corner of the net.

It took only a further three minutes for a now difficult task to become almost impossible. 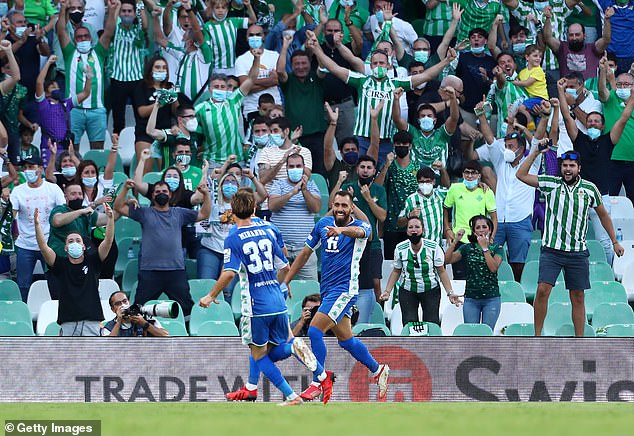 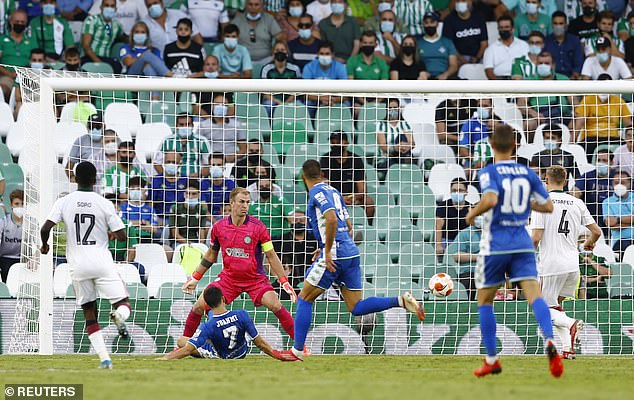 Having half-cleared a corner, Postecoglou’s men were sluggish in closing down the second ball. Standing two yards inside the box, Juanma had time to compose himself and drill a shot into the ground and in off the far post.

Finally, Betis had Celtic where they wanted them. Rogic and Ajeti forced Bravo into a fine low saves but Celtic’s reserves of energy and inspiration were flagging.

With three minutes remaining, though, their persistence was rewarded. David Turnbull’s free-kick was whipped onto the six-yard line. Ralston showed more desire than any other man of the park and bulleted a header home.

It made for a nervy closing for Manuel Pellegrini’s side but the one gilt-edged chance Postecoglou’s side needed just didn’t materialise. 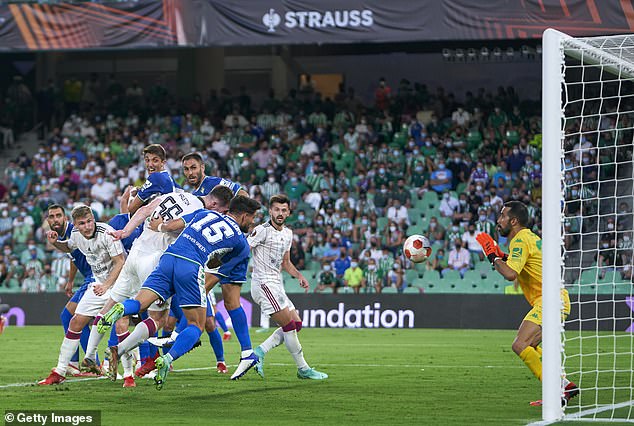