By Joanna Bell For The Mail On Sunday

Celebrity chef Tom Brown, hunky star of ITV’s This Morning, has split from his wife after less than six months of marriage.

They married in December but the relationship between the 33-year-old chef and his Glaswegian wife proved tempestuous.

Marketing assistant Ms Soto has confided to friends that the relationship is over, and sources close to the heavily tattooed chef confirmed the marriage has hit the rocks.

Mr Brown, who was born in Cornwall, shot to prominence by reaching the finals of the BBC’s Great British Menu in 2017 and made the banquet the following year.

He made his This Morning debut last year, cooking for Holly Willoughby and Phillip Schofield, who have dubbed him ‘the hot chef’.

Since then he has attracted a huge following on social media, with fans commenting on his ‘absolutely gorgeous’ looks.

Ms Soto, a mother- of-one who has appeared in several television adverts, posted excitedly on social media just days ahead of their wedding in December. 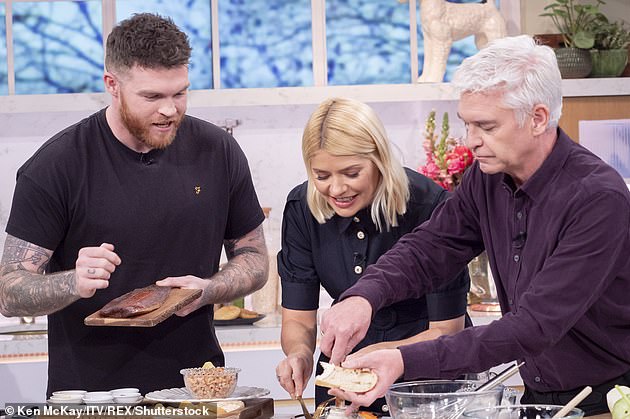 ‘I met a guy in July, decided to find a house together in August then proposed to him in bed eating pizza in September and we are finally getting hitched in three days’ time,’ she wrote beside a picture of her engagement ring.

Despite his woes, Mr Brown’s reputation as one of the UK’s most talented chefs remains.

His Michelin-starred Cornerstone restaurant in Hackney, East London, has been placed third in the National Restaurant Awards’ Top 100.