Just one in six pregnant women who admit to drinking are advised by a doctor to quit, according to a Centers for Disease Control and Prevention (CDC) study.

Researchers at the agency surveyed 950 pregnant women on how often they consumed alcohol, and whether they were told to stop by their healthcare provider.

Results revealed that of the 13.3 percent who admitted drinking over the 30 days before the appointment, just 16 percent said their doctor told them to stop.

Having alcohol while pregnant — even in small amounts — can cause serious health issues for a baby, even just one glass of wine a week.

The CDC’s report — published in the Morbidity and Mortality Weekly Report (MMWR) — was based on survey data from 2017 and 2019.

Doctors are told to ask all pregnant women who come in for an appointment whether or not they drink alcohol, based on guidelines from leading US doctors.

About 80 percent of women surveyed said they had been asked whether or not they drunk alcohol, the CDC study found.

In the report, led by Dr Jackie Luong, a clinical psychologist at the CDC, the authors wrote this was a ‘missed opportunity to reduce alcohol use during pregnancy’.

They added: ‘There is no known safe amount of alcohol, type of alcohol, or timing of alcohol use during pregnancy or while trying to become pregnant.’ 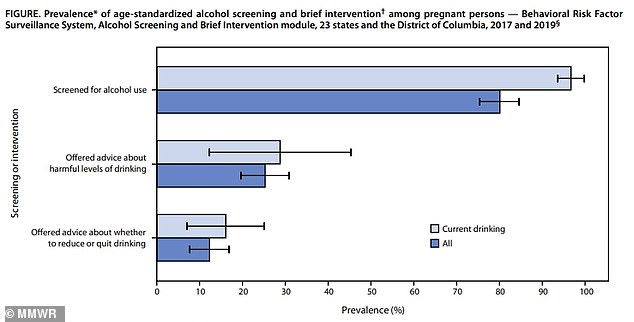 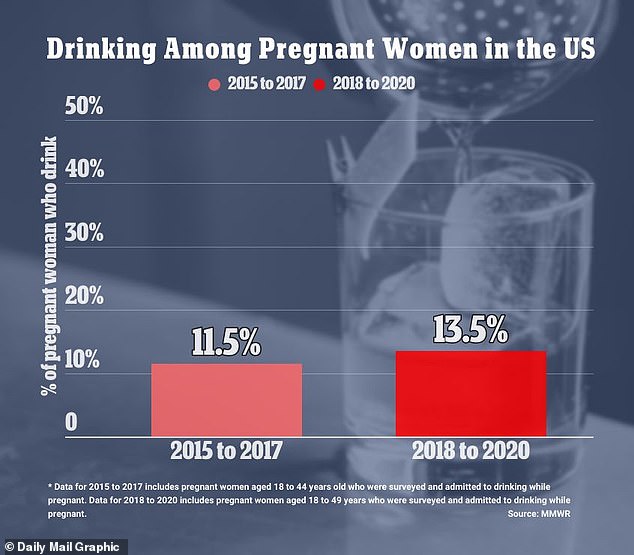 This graph shows the proportion of pregnant women in the US who admitted drinking between 2015 and 2017, and between 2018 and 2020

The study also found that pregnant women were less likely to be screened for alcohol use if they had not attended college.

The CDC said screenings for alcohol use during pregnancy could be improved by offering cash incentives to doctors and including this in digital health records.

A brief intervention or behavioral counseling has been shown to raise the likelihood of abstaining from drinking or reducing alcohol intake during pregnancy.

Data came from the Behavioral Risk Factor Surveillance System (BRFSS) survey — the nation’s premier system of health surveys — carried out between 2017 and 2019. It is self-reported, with participants not required to submit any evidence.

Despite the warnings about drinking alcohol while pregnant, the proportion that do is rising.

Between 2015 and 2017, about 11.5 percent of pregnant women admitted to drinking while pregnant.

But by 2018 to 2020, this figure had risen to 13.5 percent surveys showed. About seven percent also admitted to binge drinking — or having four or more drinks on one occasion.

No amount of alcohol is safe to consume while pregnant, and it should not be consumed at any time, medics repeatedly state.

This is because the baby is constantly developing, with both its brain and body being affected by alcohol intake.

Children exposed to alcohol in the womb may be born with a condition called fetal alcohol spectrum disorder (FASDs).

Features of this disease include abnormal facial features, such as a smooth ridge between the nose and upper lip, small head size, and trouble learning.

Doctors are currently asked to have a short conversation with all pregnant patients on whether they drink alcohol, and refer them for treatment where appropriate.

This is called the Alcohol Screening and Brief Intervention (ABSI) tool.

Is it safe to drink alcohol during pregnancy?

There is no safe amount of alcohol to consume during pregnancy, the Centers for Disease Control and Prevention (CDC) says.

There is also no safe time during pregnancy for drinking any kind of alcohol, including wine, beers and spirits.

Alcohol poses a risk to developing babies because once it enters the mother’s blood, it travels to the infant via the placenta.

It can affect a fetus at any time, as throughout pregnancy the face and body is developing as well as the brain.

Youngsters exposed to alcohol in the womb are at risk of developing a condition known as fetal alcohol spectrum disorder (or FASDs).

This can cause infants to be born with the following abnormalities:

The CDC adds that it is never too late to stop drinking alcohol while pregnant, adding the move helps a babies health and well-being.

Approximately one in 10 US women drinks while pregnant, the CDC says.