Stringent rules limiting opioid prescriptions were relaxed today in what appears to be a major U-turn.

The Centers for Disease Control and Prevention (CDC) issued tougher guidelines in 2016 in an attempt to clamp down on the opioid epidemic in the US.

While the previous guidance succeeded in reducing inappropriate and dangerous prescribing, many doctors and patients say it created an ‘untreated pain crisis’ in which sufferers with valid reasons were unable to access the drugs.

After a review, the agency loosened its guidelines today in a 100-page document, dropping suggested limits on the dosing and duration of prescriptions.

Campaigners applauded the move, saying it would help curb the ‘unintended consequences’ of the previous guidance. But some warned it offered little to those who had already been taken off their medication.

Officials moved to tighten the rules six years ago after it emerged prescription opioids were a major driver of America’s drugs crisis. But today illicit drugs like fentanyl are behind the epidemic with a record 109,000 dying last year.

About 50million American adults — or one in five — suffers from chronic pain estimates suggest, triggered by arthritis or a previous injury among others. 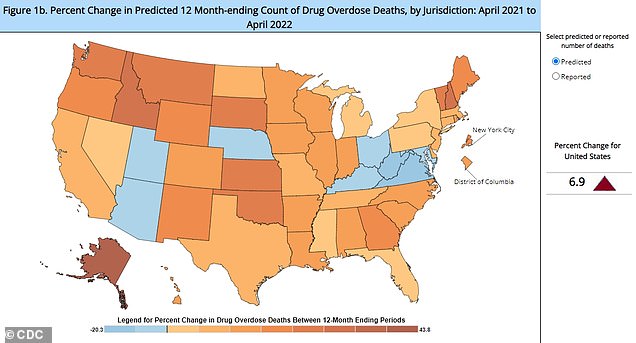 Alaska is predicted the biggest increase in overdose deaths, at 43.82 per cent (burgundy). It was the only US state to have an increase of 40 per cent or more. Eight states have predicted decreases between April 2021 and April 2022 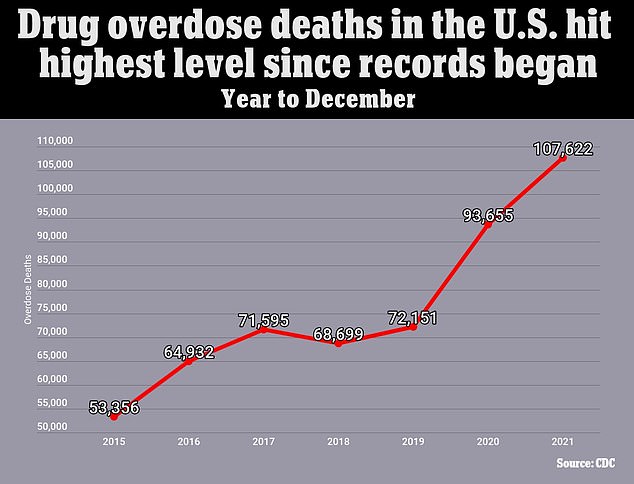 The above graph shows the CDC estimates for the number of deaths triggered by drug overdoses every year across the United States. It reveals they have now reached a record high

The new document now seeks to drop specific limits on the dosing and duration of opioid prescriptions to reduce pain.

It includes an overturning of the previous guidance that opioid prescriptions for acute pain should not last beyond three days.

Which stringent rules were relaxed?

The Centers for Disease Control and Prevention (CDC) had brought them in to curb America’s drug epidemic.

But over the last few years drug deaths have ticked up to a record high even as prescriptions have tumbled.

Below are the changes they made:

The update also says patients should not have their courses abruptly halted, but rather gradually tapered off.

Recommendations to keep doses below the equivalent of 90 milligrams of morphine per day were also scrapped.

The CDC’s acting head for the National Center for Injury Prevention and Control, Christopher Jones, said in a briefing today that the guidelines were ‘voluntary’.

‘The guideline recommendations are voluntary and meant to guide shared decision-making between a clinician and a patient,’ he said.

‘It’s not meant to be implemented as absolute limits of policy or practice by clinicians, health systems, insurance companies or governmental entitites.’

He added that they were for treating patients with pain, and had not been designed to tackle street drugs driving today’s opioid crisis.

The American Pharmacists Association (APhA) applauded the CDC for relaxing the guidelines today.

A spokesman said the agency had ‘made clear’ how the guidelines should and should not be used. ‘This should go a long way toward curbing the unintended consequences of the past,’ they added.

‘Those arbitrary marks of what’s acceptable and not acceptable is what got us into trouble with the 2016 guidelines, because it made this blanket cut off for our patients and that’s not what pain management is about,’ she said.

Others medics raised concerns however, saying gradually reducing doses may only spark side-effects in patients.

Patient advocates also suggested the update would make ‘little difference’ to those with pain that had already been taken off the drugs.

Cindy Steinberg, from campaign group the US Pain Foundation, said: ‘Most people I know — and I know a lot of people living with chronic pain — have already been taken off their medication.

‘Doctors are incredibly fearful of prescribing at all.’

About 225million opioid prescriptions were being written every year in 2012, figures suggest.

But eight years later and amid the new guidelines this had fallen to 142million.

Experts today urged the CDC to ensure that their updated guidelines reached hospitals and insurance companies to ensure they were applied.

Dr Leo Beletsky, a law expert at Northeastern University in Massachusetts, warned that their limit on morphine — although advisory — had already been used to establish legal limits.

‘The 2016 guideline itself was clear that this was not a bright line rule,’ he said. ‘But it became a de facto label, separating appropriate and inappropriate prescribing.’

The CDC released a draft of the updated guidance this February, and received more than 5,500 comments from both patients and medics.

Last year the American Medical Association urged the agency to scrap its 2016 guidelines.

Fatal drug overdoses have risen in all but eight US states in the past year, according to official data that lays bare America’s drug crisis.

The Centers for Disease Control and Prevention (CDC) estimates there were a total of 109,673 overdose deaths in the year to April — a new record.

And the provisional death count is likely to be an underestimate, the CDC said, because drug overdoses can take months to be registered.

The majority of deaths were caused by opioids — an addictive class of drug the US has been grappling with for decades — and the synthetic opioid fentanyl which has been flooding American streets in recent years.

Drug overdose deaths reached its apex between February 2021 and February 2022, when the CDC predicted 109,673 deaths were caused by people taking lethal amounts of drugs. The total count looks like it is coming down, but the CDC notes reported provisional counts may not include all deaths that occurred during a given time period, and therefore are subject to change

Alaska has seen by far the biggest percentage increase in drug overdose deaths between April 2021 and April 2022, rising by 44 per cent. It was the only state with an increase of more than 40 per cent year-on-year.

Alaska was followed by Idaho, which had an increase of nearly 30 per cent, and New Hampshire, with a rise of 29 per cent. Oklahoma and Washington round out the top five at 25 per cent and 23 per cent.

America’s drug crisis, which has been surging for decades, was made worse during the pandemic when lockdowns and hospital closures left people particularly vulnerable to addiction.

Officials said those who had drug habits were suddenly not able to meet with their healthcare providers face-to-face and worries about job security and lack of social contact pushed more people into drug use.