The Centers for Disease Control and Prevention (CDC) is expected to further change its recommendations for Americans diagnosed with COVID-19, potentially requiring a negative test to leave isolation before ten days.

Last week, the agency shortened its recommended isolation period from 10 days to five days for people who have minimal Covid symptoms.

The move drew criticism from experts who said a negative test should’ve been included. But the CDC is now considering adding a negative test to the guidance, according to CNN.

Surgeon General Dr Vivek Murthy said that the CDC is working to further revise the isolation guidance, telling CNN on Tuesday that he expects a clarification ‘any day now.’

‘What they’re trying to do – and it’s important to say more broadly – is recognize and incorporate both the evolving science on Omicron and on prior variants in terms of how long somebody remains contagious, with the critical need to maintain essential services,’ Murthy told CNN.

‘I believe that there will be a role for antigen testing here to help reduce risk as well,’ he said.

The further-updated guidance could impact millions of Americans, as the country reports record case numbers during the Omicron surge.

About 95 percent of all new Covid cases in the U.S. were caused by Omicron in the week ending January 1, according to new CDC data released on Tuesday.

On Monday, the US hit a record 1,082,549 new cases, a number likely inflated by reporting delays over the holiday weekend. On a rolling-average basis, daily cases are at 494,732 over the past seven days, up more than 110 percent from a week ago, according to a DailyMail.com analysis of Johns Hopkins University data.

However, deaths and hospitalizations remain relatively low, leading some experts to predict that Omicron will effectively end the pandemic by creating widespread immunity with limited loss of life.

Another 1,688 deaths were recorded across the country on Monday, and the seven-day rolling average of deaths stood at 1,340, marking a 12 percent decline from week-ago levels.

The nation’s leading health officials have said that the CDC may add testing to its Covid isolation guidance, after facing significant criticism from public health experts

US @Surgeon_General Dr. Vivek Murthy says the CDC will issue a clarification “any day now” on the shortened isolation period recommendation.

“They have certainly received feedback and questions about the role of testing in shortening that quarantine period,” he adds. pic.twitter.com/4iweU8n19a 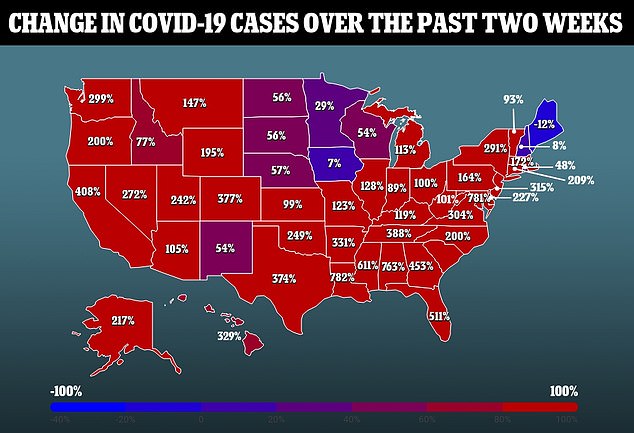 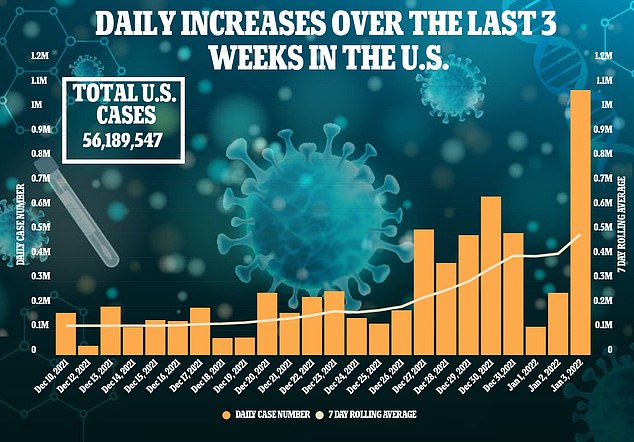 On Monday, the US recorded more than 1 million new Covid cases – a world record

Discussing a potential testing requirement on CNN this Sunday, Dr Anthony Fauci said, ‘There will be further clarification of that coming very soon.’

Along with vaccines, masks, and social distancing, isolation is an important public health tool to stop the coronavirus from spreading.

‘Isolation’ means a period of several days or weeks in which someone sick with Covid stays home and avoids contact with other people.

This is distinct from quarantine, in which someone avoids contact with other people after a potential exposure to the coronavirus and closely monitors themselves for symptoms.

Early on in the pandemic, the CDC recommended isolation and quarantine periods of 14 days.

That period was shortened to 10 days in late 2020, as scientists learned more about how the virus spreads and how people recover.

The new guidance comes with some caveats, however.

Someone diagnosed with Covid can only leave isolation after five days if they don’t have symptoms or if their symptoms are close to over – including no fever for at least 24 hours.

After that, the Covid patient must wear a mask whenever they’re around others, the CDC says.

‘The change is motivated by science demonstrating that the majority of SARS-CoV-2 transmission occurs early in the course of illness, generally in the 1-2 days prior to onset of symptoms and the 2-3 days after,’ the CDC said in a statement.

Public health experts have criticized the CDC for failing to include testing in its new isolation guidance, as some people can continue to transmit the coronavirus for over a week after they first test positive.

‘We opted not to have the rapid test for isolation because we actually don’t know how our rapid tests perform and how well they predict whether you’re transmissible during the end of disease,’ she told CNN last week.

But in recent days, the nation’s leading health officials have said that the CDC is likely to update its guidance – potentially including tests. 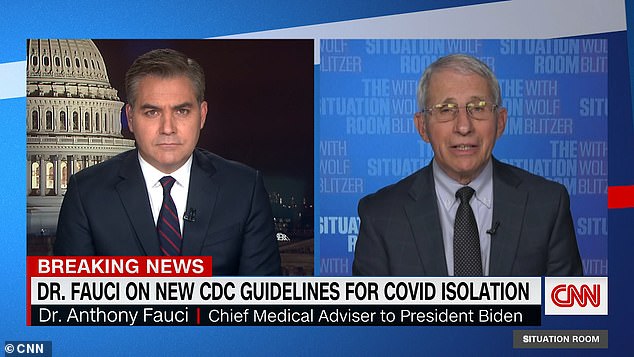 On Sunday, Dr Anthony Fauci said that he expects the CDC to further update its isolation guidance for Americans who get Covid – potentially including a negative test to leave isolation

‘In the second half of a 10-day period, which would normally be a 10-day isolation period, the likelihood of transmissibility is considerably lower,’ Fauci said.

‘People are getting concerned about why not test people at that time?’ Fauci went on. ‘I, myself, feel that that’s a reasonable thing to do.’

‘I believe that the CDC soon will be coming out with more clarification of that, since it obviously has generated a number of questions about at that five-day period, should you or should you not be testing people?’ he said.

‘There will be further clarification of that coming very soon.’

Fauci additionally said that the CDC is ‘doing their very best in trying to get the right balance of getting people back but doing it on a solid scientific basis.’

Many leading health experts consider antigen tests – also called rapid at-home tests – to be a useful indicator of a patient’s ability to transmit the coronavirus to others.

These tests require patients to have a high level of coronavirus present in their bodies before they show a positive result.

When someone recovers from a Covid infection, their rapid test results are expected to go from positive to negative as the virus leaves their body.

More-precise PCR tests, which detect the virus’ genetic material, can return positive results for weeks after someone has recovered.

In the U.K., national health guidance requires Brits to test negative on two rapid tests, 24 hours apart, before they can leave isolation early. 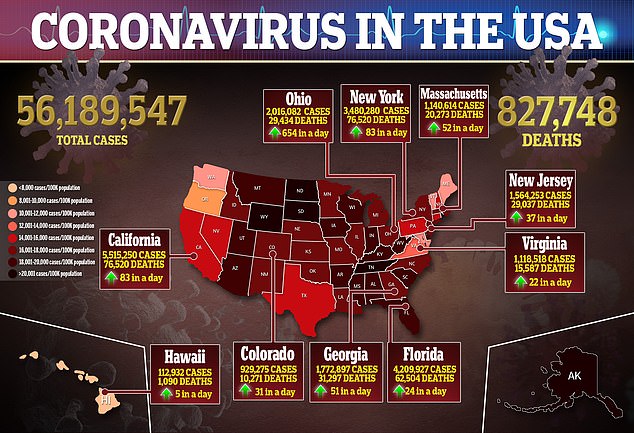 The U.S. has limited availability of these tests compared to the U.K., however, as Walmart and major pharmacies restrict the number of test kits that Americans can purchase.

Last week, the CDC also updated its quarantine guidance for people exposed to the coronavirus.

Unvaccinated people and those who received their vaccine doses long enough ago that they’re eligible for boosters should quarantine for five days, then wear a mask in public for five days.

People who are vaccinated and boosted ‘do not need to quarantine following an exposure, but should wear a mask for 10 days after the exposure,’ the CDC said.