The CDC was today blasted over its decision to drop the word ‘women’ from monkeypox guidance in favor of the term ‘pregnant people’.

The CDC was slammed last year for erasing ‘women’ from advice about Covid vaccines in favor of the gender-neutral term.

The new monkeypox pregnancy guidance was issued in July, when more than 100 cases of the virus were being detected across the US every week.

It warns an infection could severely hamper fetal development and could lead to a spontaneous miscarriage or stillbirth.

The agency urges pregnant and breastfeeding ‘people’ who contract the virus to be prioritized for treatment.

Reacting to the monkeypox guidance, the Association of American Physicians and Surgeons (AAPS) said it was an attempt to erase ‘half of the human race’.

Critics argue that de-sexing important health advice will confuse messaging that is meant to keep women safe — especially those who are vulnerable or whose first language isn’t English.

‘They’re trying to replace scientific realities about sex with a gender ideology, which is dangerous, ultimately.’

The Centers for Disease Control and Prevention replaced mention of ‘women’ with ‘people’ in pregnancy guidance to protect against monkeypox.

IS THE CDC GOING WOKE?

The agency has come under fire several times in recent months for using gender-neutral language over the terms ‘women’, ‘woman’ or ‘females’.

Aug 11, 2021: CDC director rochelle walensky encourages all ‘pregnant people or people who are thinking about becoming pregnant and those breastfeeding’ to get the Covid vaccine.

July 1, 2022: Agency warns ‘people who are pregnant or recently pregnant’ are at greater risk than non-pregnant people of severe Covid infection.

Autumn 2022: The agency’s guidance for the annual flu shot encourages ‘pregnant people (and people up to two weeks postpartum)’ to get vaccinated.

‘Pregnant people’ is designed to be more inclusive to transgender and non-binary people who can also conceive.

A woman who transitions to a man keeps her uterus unless it is surgically removed, meaning trans men have the capacity to become pregnant.

But conservatives say the attempt at inclusion itself excludes another group that has long faced discrimination — women.

Dr Jane Orient, executive director of the right-leaning AAPS told DailyMail.com that by using gender-neutral language, the CDC is ‘saying that half of the human race doesn’t exist or is the same as the other half.’

She added: ‘So much for evidence-based medicine.’

The CDC guidance says the symptoms in ‘people who are pregnant’ are similar to ‘non-pregnant people’.

But pregnant and breastfeeding ‘people’ should be prioritized for antiviral treatments because of the potential risk to their unborn child.

It is not clear whether the monkeypox vaccine JYNNEOS causes fetal harm, so medics should weigh the risks versus benefits, the CDC says.

However, the agency highlights clinical studies of the vaccine in animals ‘have shown no evidence of harm to a developing fetus.’

Within a few days of detecting early symptoms, patients will develop a rash and lesions that spread from the face throughout the body. 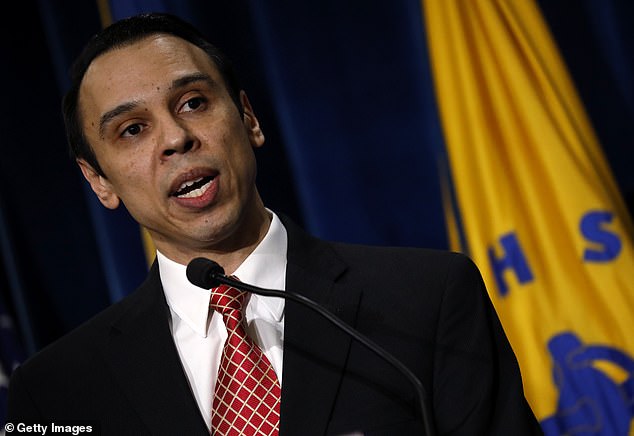 Ex-Trump officials blasts CDC for stripping the word ‘women’ in the context of pregnancy in monkeypox safety guidance.

Mr Severino – the former director of Health and Human Services’ Office for Civil Rights under former President Donald Trump – said the constant use of gender-neutral terms in the CDC advice was an ‘attempt to deny that it is [biological female] women who get pregnant’.

He added: ‘And that has consequences for health, as well as policy down the road.’

The vast majority (99 per cent) of monkeypox cases have been in men and 94 per cent of these patients recently had sex or close intimate contact with another man.

But experts worry the outbreak could become more widespread among other parts of the population.

There have already been more than 150 confirmed cases in children since May, according to the American Academy of Pediatrics, and dozens of infections in women.

Monkeypox is transmitted when someone makes close contact with the lesions of another person who is infected, their clothing, or bedsheets.

The CDC puts the current tally of global cases at around 65,000. The US leads the world in confirmed cases with roughly 25,000 as of September 14.

Official monkeypox safety guidance is just the latest healthcare issue to be caught in the culture war crosshairs.

The abortion rights movement has adopted more gender-neutral language to describe those who are affected by the June Supreme Court decision to eliminate the constitutional right to an abortion.

Abortion rights advocacy group NARAL, for instance, advised activists in 2020 to refer to abortion as a women’s issue.

But two years later, the group is advising campaigners use non-gendered terminology ‘to be more inclusive of the trans men, nonbinary and gender non-conforming people’.