A teenager who died during a mass brawl outside a KFC was allegedly attacked over a love triangle involving his pregnant girlfriend.

Lachlan Andrews, 17, and Harrison Hone, 18, were allegedly stabbed at the restaurant in Casino in NSW’s northern rivers region when a fight involving 20 people broke out around 5.10pm on May 29.

Mr Andrews died at the scene while Mr Hone was rushed to hospital in a serious condition before later stabilising.

A 17-year-old boy was arrested two hours later and has been charged with murder, reckless wounding, and affray.

According to 9News, the brawl was sparked over a love triangle dispute involving Mr Andrews’ partner.

Mr Andrews’ sister Paige Dopson told the ABC the baby was not his, but he intended to raise it as his own.

Tributes have begun pouring in for Lachlan Andrews, 17, who died after allegedly being stabbed in NSW’s Northern Rivers region last month

Tributes have begun pouring in online for the teenager who has been remembered as ‘caring and passionate’ as his heartbroken family raise funds to have his body brought home to Canberra.

Mr Andrews, originally from the ACT, had moved to Murwillumbah with a friend to work on boats.

He had gained employment at a Tweed Heads tourism business repairing and building vessels as a vinyl wrapper and was one of the many people who lost their homes when the area was ravaged by floods in March.

His sister Paige said the young man, who was known as the ‘silly monkey’ in his family, was ‘strong and hardworking’ and had ‘overcome many life challenges’.

‘He always put a smile on our faces and laugh from our belly’s and boy did he know how to fight then love and laugh,’ she wrote in a GoFundMe page.

‘Lachie was a big family man he would always be there if we had plans for getting around for a bog family gathering , singing us his silly songs and “it’s a good day to be out fishing”. 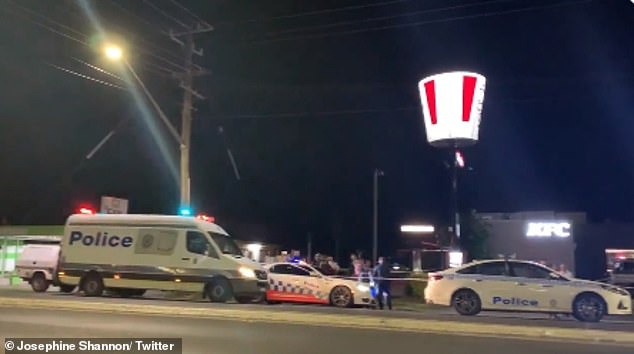 Mr Andrews and another teenager, 18, were allegedly stabbed at a KFC store in Casino about 5.10pm on Sunday May 29 (pictured is the scene)

Ms Dopson said her brother was a caring, passionate, person who was one of the ‘heroes’ helping the Northern Rivers community clean up in the aftermath of the devastating floods.

She said he loved everyone around him deeply and always went out of his way to help and make those around him smile and laugh. 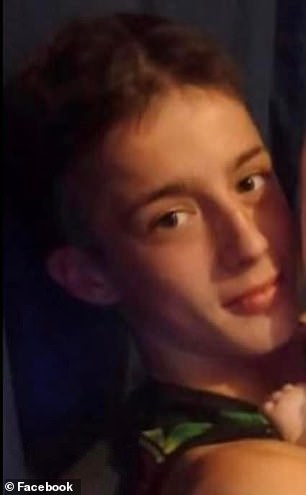 ‘We were so extremely proud of you Lachlan you were always top subject to talk about how proud we were seeing you drive boats and seeing your life bloom,’ she said.

‘Thank you for being such a kind brother, beautiful loving son, caring and passionate friend… for sharing with us such a treasured soul.

‘There wasn’t an ounce of bad in you. you were treasured gold. You’ll never be forgotten.’

His other sister Hayleigh said they grew up like ‘twins’ because they were closest in age.

‘All my life he’s been there, supported me. He played dolls with me,’ she told the ABC.

‘He defended me, laughed with me, cried with me. He was my best friend.’

Devastated friends have flocked to social media to pay their respects to the teenager whose life was tragically cut short.

Nick Hart, who grew up as Mr Andrews neighbour, said the pair had gone through the Covid-19 pandemic and the floods since moving north together, but always had a ‘positive outlook’.

He said the young man had ‘respect from all that met him’ and a ‘massive heart.

‘He was one of the many heroes in the floods who helped everyone in the community. Our own workshop was flooded and we lost our house,’ Mr Hart said. 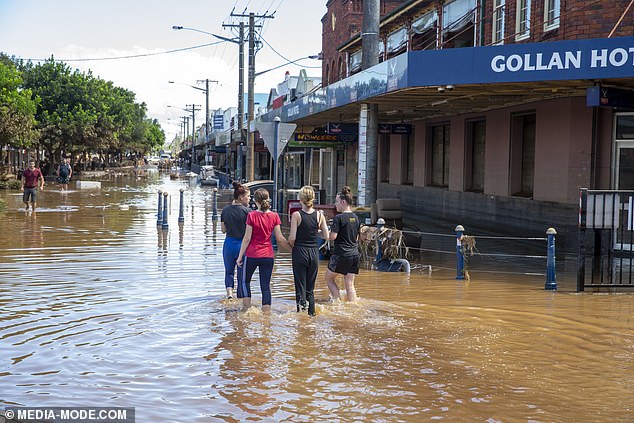 ‘Lachie made friends everywhere he went. He really was a young man who had an amazing future. I will miss him deeply forever.’

‘Still doesn’t feel real loved hearing your name on the news,’ he wrote on Facebook.

‘May you Rest In Peace.’

Mr Andrews’ accused killer appeared at a hearing in the Children’s Court earlier this week.

He did not apply for bail and he will remain in custody until his next appearance in July.