Gambling company 888 Holdings has posted a record year of trade despite a slowdown in the fourth quarter, thanks to handsome growth in casino gaming.

The Gibraltar-based group saw its revenue surge by 14 per cent to $972million last year, with around three-quarters of takings deriving from its regulated and taxed markets, which include the UK, Italy and Portugal.

Business-to-consumer trade provided the bulk of that expansion as revenues from casino gaming jumped by 24 per cent, and its tie-up with magazine Sports Illustrated in the United States successfully launched.

Expansion: Gibraltar-based 888 saw its revenue surge by 14 per cent to $972million last year, with around three-quarters of takings deriving from its regulated and taxed markets

By contrast, sports takings only increased by 4 per cent due to the introduction of regulatory changes in countries such as the Netherlands, where 888 exited in early October after failing to gain an online gambling licence.

This departure partly contributed to fourth-quarter revenues plummeting by 16 per cent against the same time last year, though this drop also reflected the 888’s impressive prior year comparative performance.

Stiff trading restrictions on betting outlets in 2020 and the early part of 2021 in response to the coronavirus pandemic meant punters had to go online to make a bet, heavily benefitting gambling operators like 888 Holdings as a consequence.

Chief executive Itai Pazner said: ‘I am pleased to report another year of record revenues alongside these important strategic milestones, delivering double-digit revenue growth despite a very tough comparative period.

‘This performance reflects the continued success of our data-driven investments and execution against our product-leadership focus that delivers ongoing improvements in the usability, quality and safety of our sports betting and gaming products.’

888 has also undergone significant changes to its operations, emphasised by its ‘transformational’ agreement to purchase William Hill’s non-US assets from Caesars Entertainment for £2.2billion. 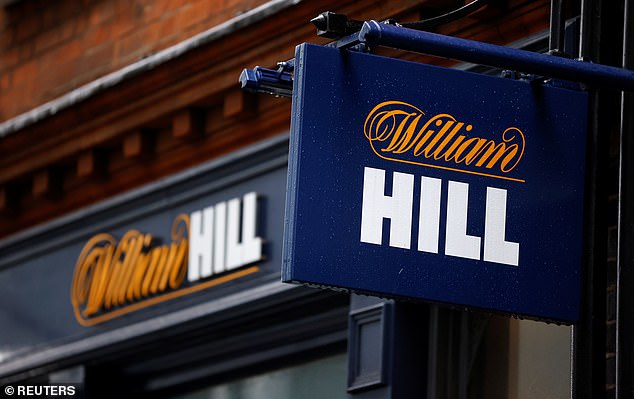 Huge purchase: All of William Hill’s estimated 1,400 UK betting shops will belong to 888 Holdings when it completes the purchase of the bookmaker’s non-US assets later this year

The firm said the acquisition would help it diversify its sources of revenue, boost its presence across numerous countries and enable it to take advantage of the thriving sports betting industry.

This growth has partly stemmed from the US Supreme Court ruling in 2018 that overturned a near-nationwide ban on sports gambling and its subsequent legalisation in many states such as New Jersey and Pennsylvania.

All of William Hill’s estimated 1,400 UK betting shops and European gambling brands such as Mr Green and Redbet will come under 888’s auspices when the arrangement is finalised, which it expects to happen sometime in the second quarter of this year.

To fund this transaction and boost its finances, it has secured £2.1billion in debt financing from banks J.P. Morgan, Morgan Stanley and Mediobanca, and attained a £150million revolving credit facility.

More recently, it agreed to sell its bingo businesses to Saphalata Holdings, a division of Broadway Gaming, for a minimum of £38million in order to focus on its core operations and the US market.

To go ahead, though, the deal is reliant on the restructuring of the bingo divisions and the UK’s Gambling Commission decision over whether to award that new business its own licence.

Shares in the company closed trading 0.75 per cent lower at 266.4p on Tuesday, meaning their value has declined by around a quarter over the last six months.