Former President Jimmy Carter and his wife Rosalynn have released a picture from their meeting this week with President Joe Biden and First Lady Jill Biden – but it left social media users baffled by its odd perspective.

The photo saw both Bidens appearing to loom large over the Carters who were pictured on sitting on two living room chairs.

All four were pictured without face masks – despite Joe Biden insisting that he wears a mask while outdoors even though he has been vaccinated against COVID-19.

The photo was taken at the Carter’s home in Plains, Georgia last Thursday, 78-year-old President Biden’s 100th day in office.

The couple live in two-bedroom rancher the president built himself since before he entered the White House.

Both the Carters are in their 90s. Jimmy Carter is 96 and his wife Rosalynn is 93.

The Carter Library posted a photo of former President Jimmy Carter and his wife, Rosalynn’s visit with President Joe Biden last week in Georgia with a rather strange perspective 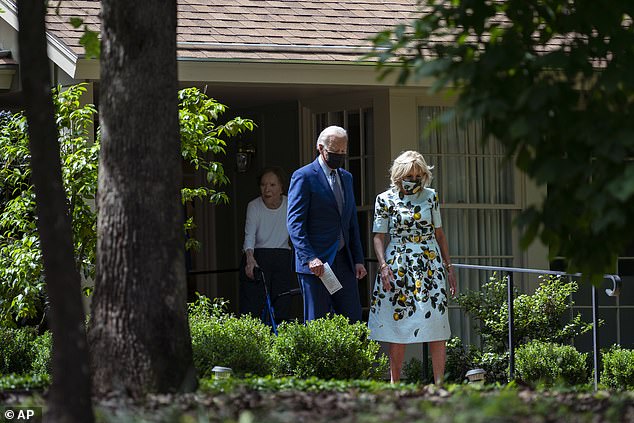 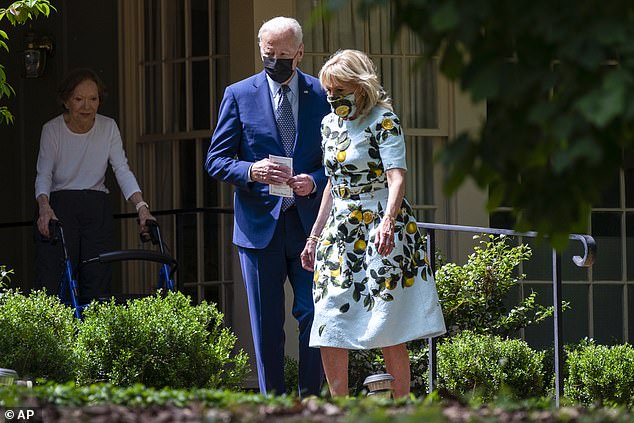 The Jimmy Carter Presidential Library released the photo of the visit, with presidential historian Michael Bechloss posting it to Twitter on Monday night. It led to some humorous responses online.

‘This is an extremely odd looking picture. I have great respect for all four, but the pic is just bizarre…,’ wrote one user on Twitter.

‘Can we discuss the perspective on this photo?’ said screen writer Jeffrey Lieber.

‘I know people tend to shrink as they get older, but did not realize their furniture did as well,’ joked another Twitter user.

‘I was just thinking ‘I love everyone in this photo, but wtf am I looking at?’ Is it a tiny house? Are the Biden’s giants? Are the Carter’s smurfs?’, asked Melinda Henrickson.

‘These appear to be the smaller, back-up versions of the Carters,’ wrote Kent Heier.

‘I know the Carters are elderly, but they are not doll size, and their home probably isn’t either,’ surmised one online poster.

‘I love this; but the Carter’s look like miniature doll house people. Is it me??? But I love it,’ tweeted another.

On Air Force One, deputy press secretary Karine Jean-Pierre explained that the visit wasn’t because Jimmy Carter was in poor health.

‘They had said on that call they would try to connect after inauguration,’ she said, explaining that Biden and Carter had spoke by phone on the eve of Biden’s swearing-in. ‘And since they were going to Georgia they wanted to stop by and say hello.’

She also said the visit was unrelated to the recent death of Carter’s vice president, Walter Mondale, who was also a close friend of Biden’s.

‘No, this is just, as I said, a longstanding friendship – they said they were going to try and see each other after inauguration,’ 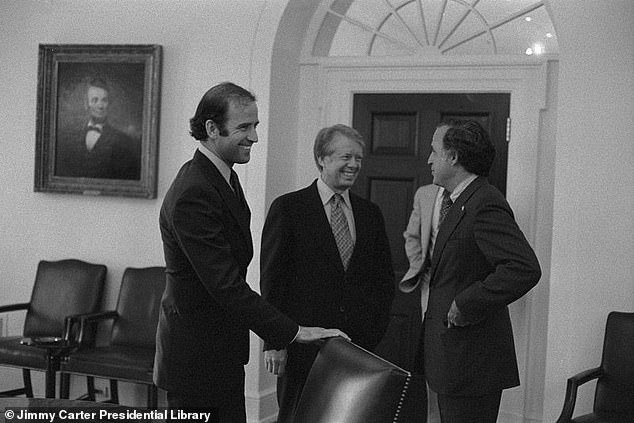 In this picture is from June 14, 1977, Sen. Joe Biden (left) with President Carter (center) and someone else from the Delaware delegation

Due to the COVID-19 pandemic, Carter and his wife were unable to attend Biden’s inauguration in January.

But both couples are now vaccinated, and the Carters have even resumed worshipping in-person at their church, Maranatha Baptist Church.

Carter, who was president between 1977 and 1981 called ‘my first and most effective supporter in the Senate’ as well as ‘my loyal and dedicated friend.’

Biden was a young Delaware senator and Carter ally during the Georgian’s term in the White House and was the first senator to endorse Carter in his bid for the presidency.

Biden later told reporters how he enjoyed the meeting.

‘It was great to see President Carter. And we sat and talked about the old days,’ he said. ‘His health has gotten better.’

The Carters will celebrate their 75th wedding anniversary later this year on July 7, 2021.

The 39th president, in office from 1977-81, has largely receded from public view amid the coronavirus pandemic and his own health challenges due to a series of falls in 2019.

He previously survived a dire cancer diagnosis in 2015 having been diagnosed with metastatic melanoma that was detected in his liver and spread to his brain.

About six months after the diagnosis, Carter announced he no longer needed cancer treatment due in part to a groundbreaking medication that trains the immune system to fight cancer tumors.

He was hospitalized two years later in 2017 for dehydration while building homes with Habitat for Humanity in Canada.

He was back at the work site the next day after he was discharged.

Despite receding from public view due to health issues, Carter remains a quiet force in politics at home and, through his post-presidential Center, in public health and human rights advocacy around the world.