Carrie Underwood showed off her toned abs in a series of snaps shared to her Instagram account on Wednesday.

The former American Idol winner, 38, caught up on her tan while ‘catch and release’ fishing from a boat on a lake while wearing a bikini.

Underwood looked sensational in a two-piece swimsuit just days after she celebrated her 11th anniversary with her husband, Mike Fisher.

Gone fishing: Carrie Underwood showed off her toned abs in a series of snaps shared to her Instagram account on Wednesday

Underwood was dressed in a black-and-white bikini top that emphasized her impressively toned midsection as she spent time on a boat.

The hitmaker paired her top with matching bottoms  that gave her sculpted thighs a bit of tanning action during the fishing trip.

The Grammy-winning songwriter added a little bit of pop to her ensemble with a stylish pair of round sunglasses that featured multicolored rims.

Her beautiful blonde locks remained free-flowing for the excursion and cascaded onto her backside while enjoying her time on the water. 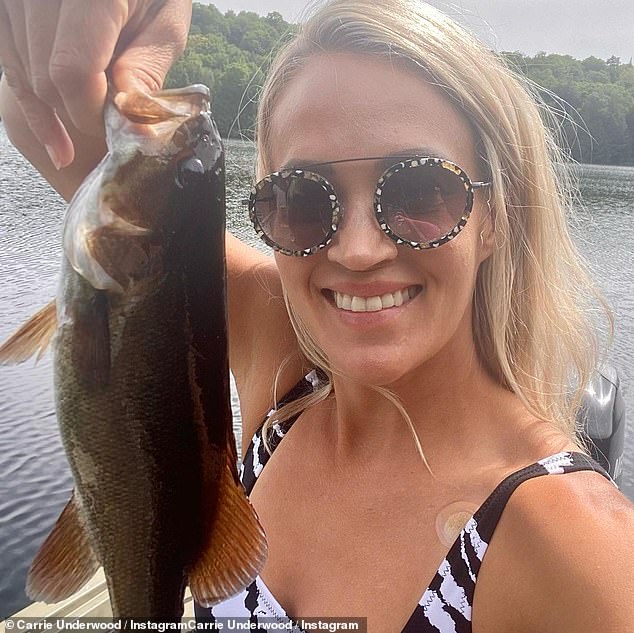 Appropriate attire: The former American Idol winner wore a patterned black-and-white bikini top and a matching bottom while spending time on the water 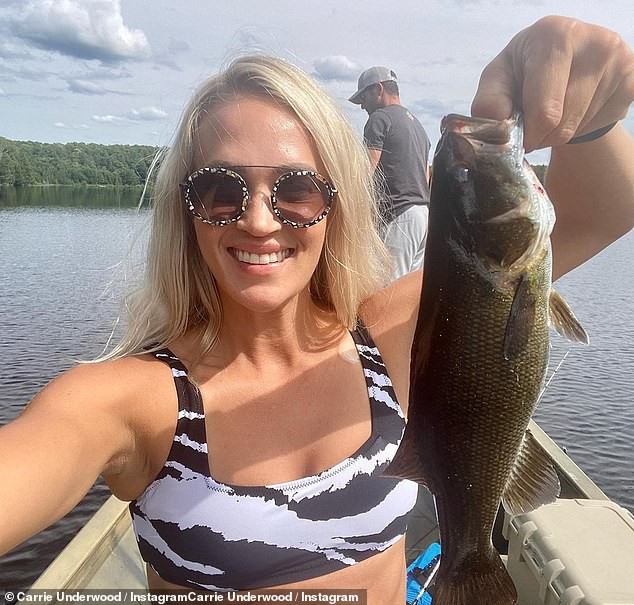 Eye-catching accessories:  The songwriter added a bit of pop to her outfit with a pair of stylish round sunglasses

Underwood made a point of noting that she was ‘#JustSayinHi’ to the ‘Feeeeeeshies’ in the caption as she assured followers #CatchandRelease was in play.

She commemorated her anniversary earlier this week with a heartfelt message to her husband.

Carrie captioned a few photos: ‘Happy anniversary, babe! 11 years sure have flown by…here’s to many, many more! Love you!’

The happy couple’s initial meeting took place when backstage at one of her concerts in 2008. 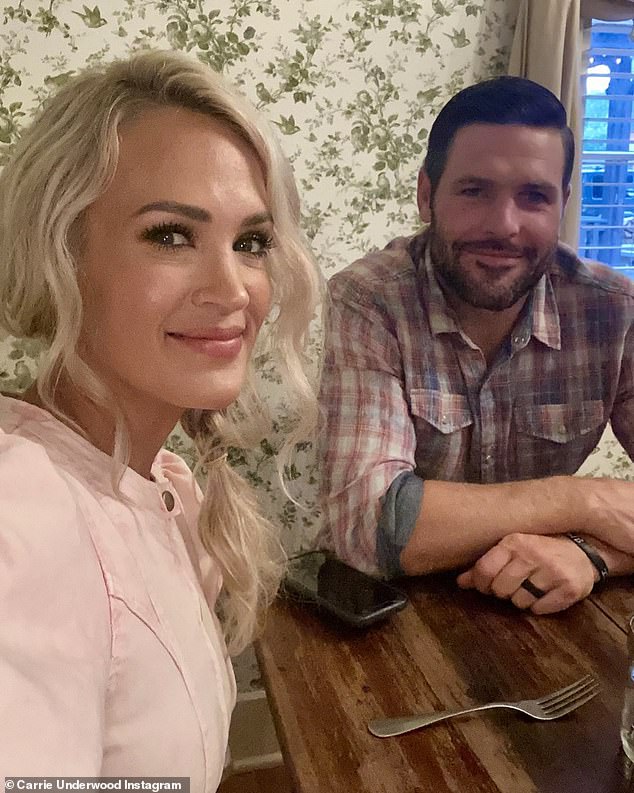 Special occasion: She commemorated her anniversary earlier this week with a heartfelt message to her husband

Carrie began dating the 41-year-old former professional ice hockey player shortly afterward, and they went on to announce their engagement the following year.

Underwood and Fisher moved quickly and tied the knot during a ceremony in Georgia in front of hundreds of family and friends.

In 2014, the songwriter announced that she was expecting their first child, and she gave birth to their first son, Isaiah Michael, currently aged six, the following year. 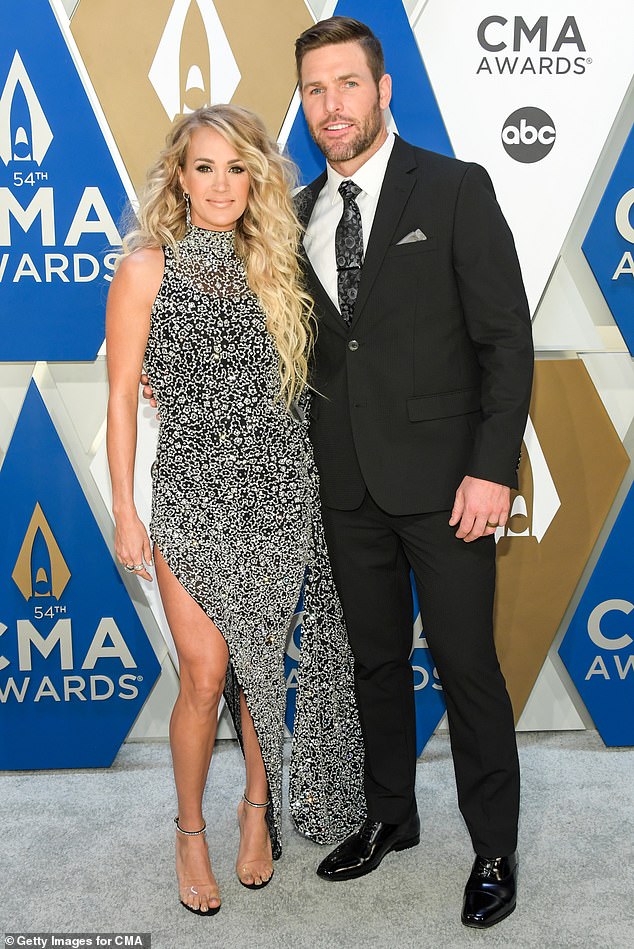 Moving quickly: The happy couple met backstage at one of her concerts in 2008, and went on to tie the knot; pictured at the 54th annual CMA Awards in 2020

The couple enjoyed their new lives as parents for several years before they added another son named Jacob Bryan, aged two, to their family in 2019.

Following the birth of her second child, Underwood revealed that she had experienced several miscarriages in the past.

During an interview for CBS Sunday Morning, Carrie expressed she had partially dealt with her challenges by working on musical projects in order to channel her emotions in a productive way. 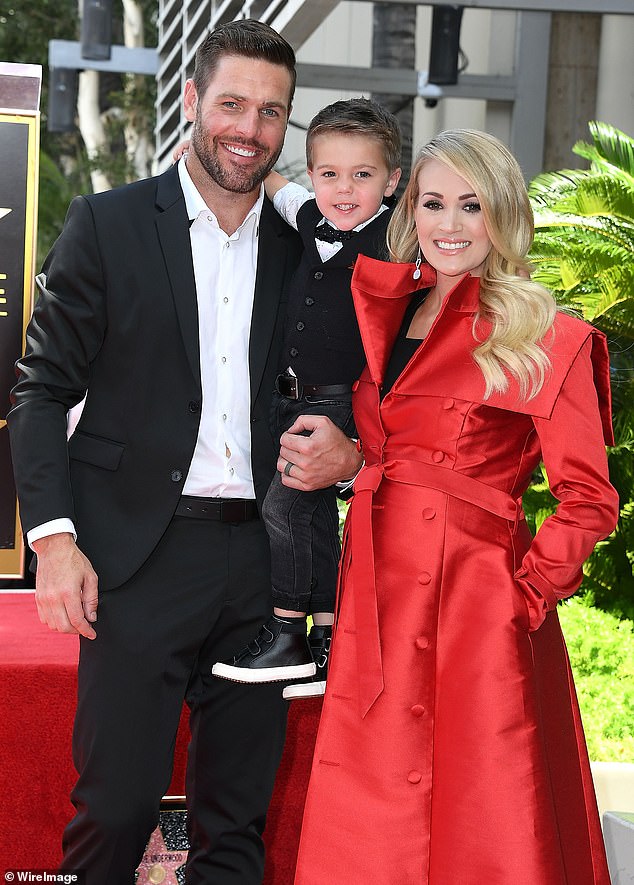 Adding to the mix: Underwood and Fisher went on to welcome two sons named Isaiah Michael and Jacob Bryan following their nuptials; they are seen with their eldest child in 2018

She recalled that: ‘literally right after finding out that I would lose a baby, I’d have a writing session, I’d be like, ‘Let’s go. You know, I can’t just sit around thinking about this.”‘

She did point out, however, that she was surrounded by people that had her best interests in mind and noted that she was extremely grateful for their support. 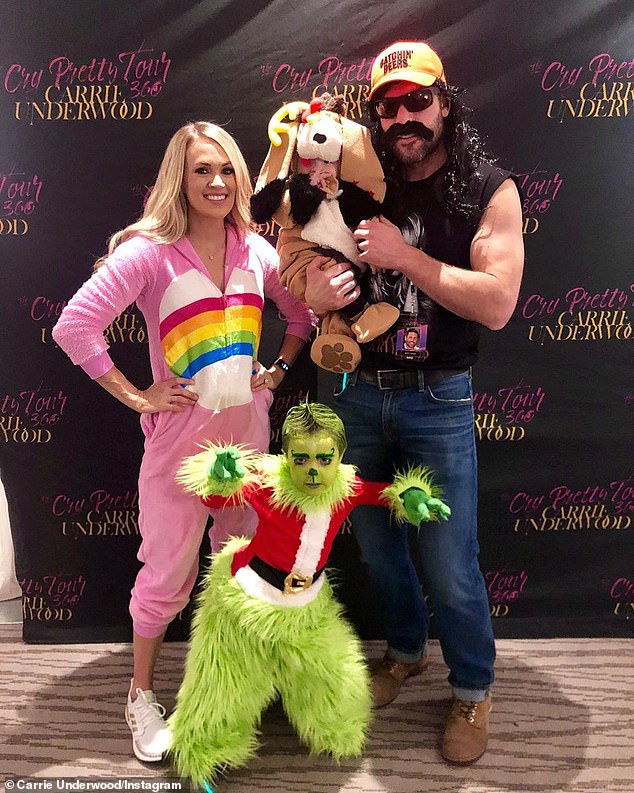 Blessed: During an interview with CBS Sunday Morning, Underwood expressed that she had ‘always been afraid to be angry’ and that she was grateful for her friends and family