EXPRESS INFORMER > News & Politics > CAROLINE GRAHAM: Farewell (again) to Michael Fawcett, the one man Charles says he can’t do without

He is the ‘indispensable’ aide about whom Prince Charles once reportedly exclaimed: ‘I can manage without just about anyone, except for Michael.’

But as Michael Fawcett last night ‘temporarily’ stepped down as the chief executive of The Prince’s Foundation, many will wonder if Charles’s right-hand man of four decades can possibly dodge the bullet again.

The 58-year-old has been forced to resign twice before – once after being accused of bullying in 1998 and again in 2003 when he was dubbed ‘Fawcett the Fence’ for selling royal gifts.

Then, his closeness to his master (he reportedly squeezed toothpaste onto the Prince’s toothbrush when Charles broke his arm playing polo) helped bring him back from the wilderness.

But who is the former comprehensive schoolboy with such a seemingly impenetrable hold on our future King?

Born in Orpington, Kent, he arrived at Buckingham Palace aged 17 straight out of catering college.

A Former Royal aide who witnessed Fawcett’s remarkable rise through the ranks said: ‘When he first arrived, he called himself Michael Buxton-Fawcett which sounded very grand.

‘We used to jokingly call him “Sir Michael”. He soon dropped Buxton, which was his mother’s maiden name.’

As Michael Fawcett last night ‘temporarily’ stepped down as the chief executive of The Prince’s Foundation, many will wonder if Charles’s right-hand man of four decades can possibly dodge the bullet again.

The aide said: ‘His rise was remarkable for someone from such a modest background. He became a senior footman, then Charles’s valet.

‘From that point, he dug in and secured his position. He is one of the few people the Prince absolutely trusts. He wields an extraordinary amount of influence.’

When the Prince and Princess of Wales formally separated in 1992, Fawcett remained firmly on Team Charles.

Indeed, Diana reportedly so disliked him that she changed the locks at Kensington Palace moments before Fawcett arrived to collect her estranged husband’s clothes.

A source said: ‘It was Michael who helped protect and guide her as she transitioned from Royal mistress to Duchess of Cornwall.

‘He made himself indispensable to them as a couple.’

Indeed, it is said to have been Camilla who intervened when Fawcett first resigned in 1998 after allegations of bullying.

‘His resignation was accepted but Camilla stepped in and persuaded Charles to reinstate him,’ the aide said.

Five years later, Fawcett stepped down again after an internal inquiry found he had broken regulations by accepting and selling gifts that Charles did not want.

Crucially, the probe cleared him of any financial wrongdoing.

‘Fawcett took the heat for that one but his actions endeared him even more to Prince Charles because he fell on his sword and proved his loyalty,’ an insider said.

He also oversaw renovations at the Prince’s Highland retreat, Birkhall, the former home of the Queen Mother, and in 2013 was put in charge of Charles’s pet project, the renovation of Dumfries House. 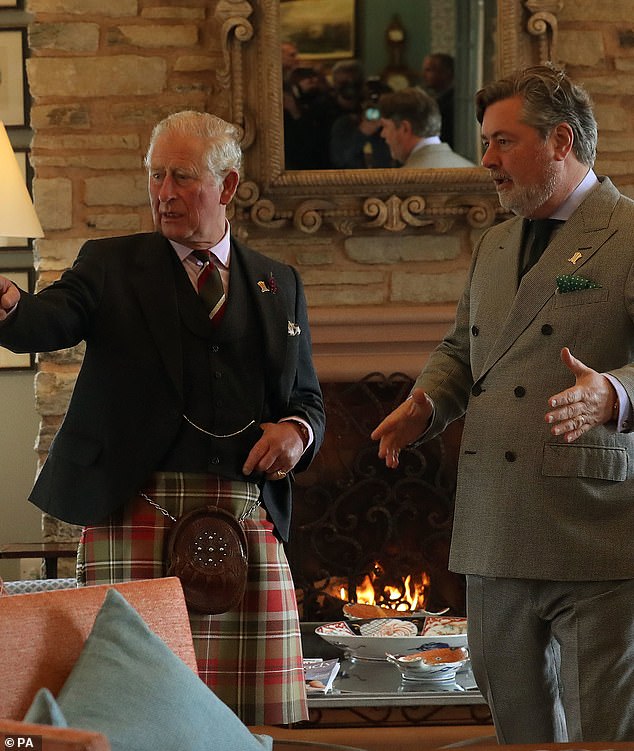 Fawcett oversaw renovations at the Prince’s Highland retreat, Birkhall, the former home of the Queen Mother, and in 2013 was put in charge of Charles’s pet project, the renovation of Dumfries House

‘Michael talks to the Prince at least two or three times a day,’ the source added. ‘He is that close.’

Over the years, Fawcett has started to mimic his boss’s taste in clothes, with bespoke suits from Savile Row, custom-made shirts and a pocket-square peeking out from his breast pocket.

‘He fiddles with his cuffs the way Charles does. He even started speaking with the same inflections,’ said the aide.

But there have been missteps.

Eyebrows were raised when, for one fundraising event, he hired Irish dancer Michael Flatley to perform with a troupe of female dancers ‘who whipped off their robes to reveal skimpy bikinis’.

‘Jaws dropped. These were high-end donors, some of whom had paid tens of thousands of pounds to be there, maybe more. It was inappropriate,’ said one guest who attended the event.

Fawcett has been married for more than two decades to Debbie, 59, a former Palace housemaid.

The couple have two children, Oliver and Emily, both in their 20s, who work for Premier Mode.

In 2000, Fawcett was made a Member of the Victorian Order and, until now, many believed he would land a knighthood when Charles becomes King.

‘Whatever people say about Michael, he has helped raise millions of pounds and created hundreds of jobs,’ said one supporter.

‘His loyalty to the Prince has never waivered. If anything, their bond is stronger now than ever.’